One of the biggest challenges of relocating is deciding where to go, through carefully weighing the potential earnings and expenses. Helping people find their ideal place to live is Rentable’s main concern, so we’re constantly looking for news ways to help renters navigate the upsides and drawbacks of cities.

Recently, we identified the Best Cities for Job Seekers among the 25 largest cities and the five fastest-growing careers. But the cities with the most jobs aren’t always the cities that are the best fit for renters. For example, San Francisco is time and again named one of the top cities in the country for tech job opportunities. But renters there also pay the highest rates in the nation, at $3,526 for the average 1-bedroom, according to Rentable data.

This time, we’ve analyzed a total of 76 metropolitan statistical areas for computer and math job density, median salary in those positions, and median 1-bedroom rent price. 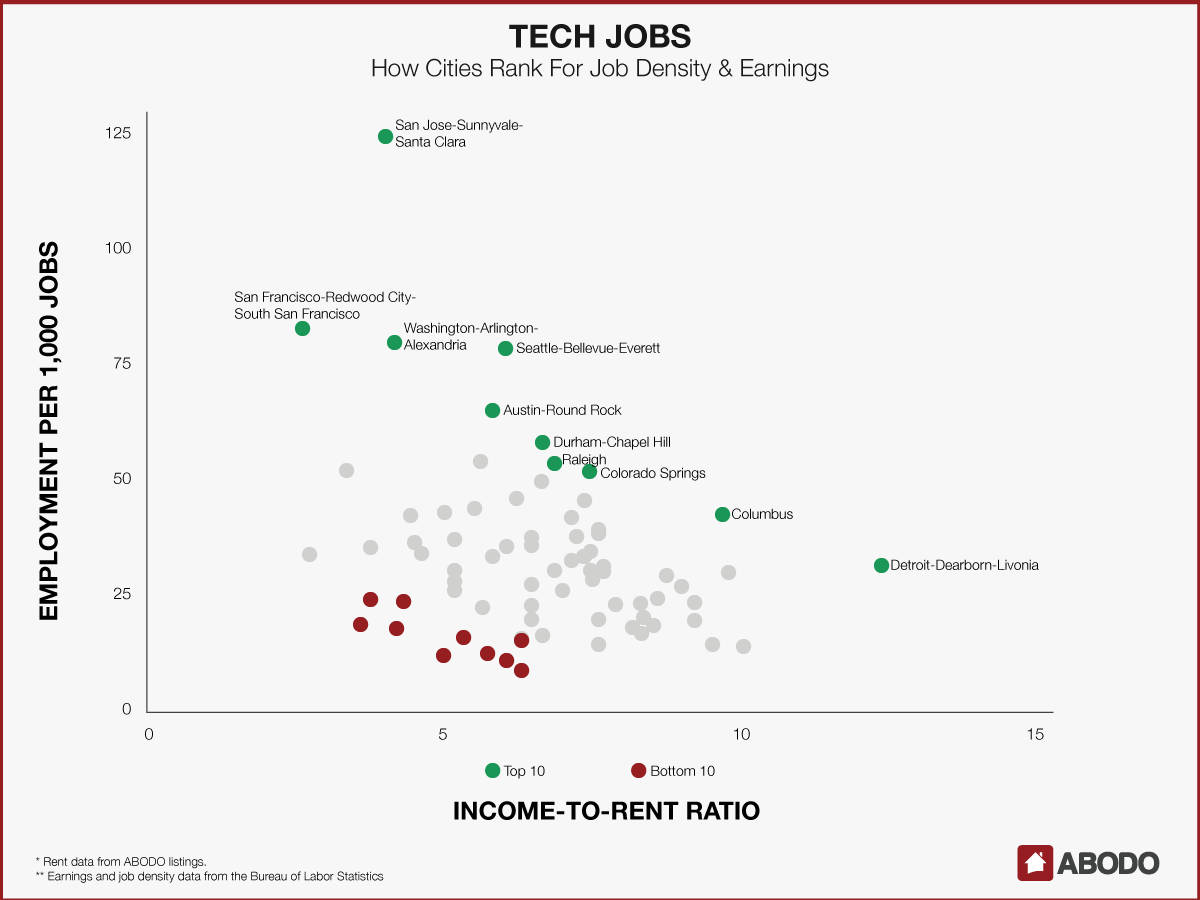 Plotting each city’s values gives us a good picture of in which factor cities excel. San Jose–Sunnyvale–Santa Clara, for example, blows every other city out of the water when it comes to employment, with nearly 125 computer and math jobs per 1,000 total  jobs in the metro area. San Francisco–Redwood City–South San Francisco, as expected, is relatively close behind, with about 79 jobs, followed by Washington–Arlington–Alexandria (77) and Seattle–Bellevue–Everett (76).

The other axis — a ratio of computer and math occupation income to 1-bedroom rent prices — shows an entirely different set of cities surpassing the “tech hubs.” Computer and math workers in Detroit–Dearborn–Livonia  earn 12 times more in income than they’re paying in rent. Those in Toledo are earning about 10 times more. Tucson, Columbus, Bakersfield, Albuquerque, Wichita, and Cleveland–Elyria all earn more than 9 times what they’re paying in rent.

To make sense of this breadth of information and show which areas enjoy the best of both worlds, we created a ranking, with employment weighted 75% and the income-to-rent ratio 25%. Some familiar names still top the list: San Jose–Sunnyvale–Santa Clara, Seattle–Bellevue–Everett, Washington–Arlington–Alexandria, and San Francisco–Redwood City–South San Francisco place in the top four. Austin–Round Rock, an area often acclaimed for having one of the country’s fastest-growing tech scenes, lands at #5, with nearly 65 computer and math jobs per 1,000 and workers whose earnings are nearly 7 times the cost of rent. Durham–Chapel Hill, Colorado Springs, Raleigh, Columbus, and Detroit round out our top 10.

At the absolute bottom of our list lies another California metro area: Riverside–San Bernardino–Ontario, where tech workers earn five times more than the average 1-bedroom rent, but there are just 11 jobs per 1,000 to go around. Miami–Miami Beach–Kendall, Corpus Christi, and Urban Honolulu didn’t fare much better. (For a full list of metro areas, their scores, salary, rent, and employment, see the full data set.)