Looking for a job? Looking to find the best cities for jobs? Whether you just graduated or are simply looking to make a change, it might be time to reconsider your location — not all cities are created equally. And which city will give you the most opportunity largely depends on what career path you’ve chosen.

Nationally, the unemployment rate is holding at less than 5% — down from a 2009 high of around 10% — and the job market is seeing steady growth. According to the Bureau of Labor Statistics, most of that growth between 2012 and 2015 has taken place in a few key sectors.

Two occupation categories are in a league of their own when it comes to growth, boasting a nearly 5% lead over the next-closest occupation. Community and social service grew 14.61% and computer and mathematics grew by 14.49%. Next up are health care practitioners and technicians at 9.89% growth, and construction and extraction at 9.24%. Closely behind is art, design, entertainment, sports, and media with 8.42%. (We’ll detail what these categories include later on.)

For reference, the national average for growth in all categories was just 4.47%, rendering these numbers for the top five fastest-growing careers all the more impressive.

BEST CITIES FOR JOBS: HOW THE TOP 25 CITIES STACK UP

The United States is very large, and the smaller the town, the more distorted employment figures can be. So in order to put some boundaries on our study, we limited our research to the top 25 most populous cities in the United States (according to U.S. Census Data), and found job density data for the country’s five fastest-growing occupations.

But these are enormous cities with huge job markets, so how much can that tell us about the odds job-seekers in those occupations face?

To make this information more accessible, we made use of the Bureau of Labor Statistics’ location quotient, which compares an occupation’s prevalence in a specific location to its national prevalence, based on total employment instead of total population.

The location quotient is a ratio of ratios, comparing the local ratio of a specific occupation to total employment to the analogous national ratio. A value of 1 indicates that a job’s density is equal to the national average; a figure above or below 1 shows a relative strength or paucity of jobs, compared to the national figure.

In nearly every case, metropolitan areas were among the best places to find jobs in the country’s fastest growing occupations. There was one exception: farming, fishing, and forestry occupations.

According to the U.S. Department of Labor, the sector grew 7.95% from 2012 to 2015, adding 79,000 jobs nationwide. But for each city in our list, farming, fishing, and forestry occupations showed location quotients below 1.

These results prove a somewhat unsurprising point: farming, fishing, and forestry jobs are found largely outside of metropolitan areas. It’s a growing field, but it’s a decentralized, rural one.

TOP 10 CITIES FOR THE FASTEST-GROWING JOBS 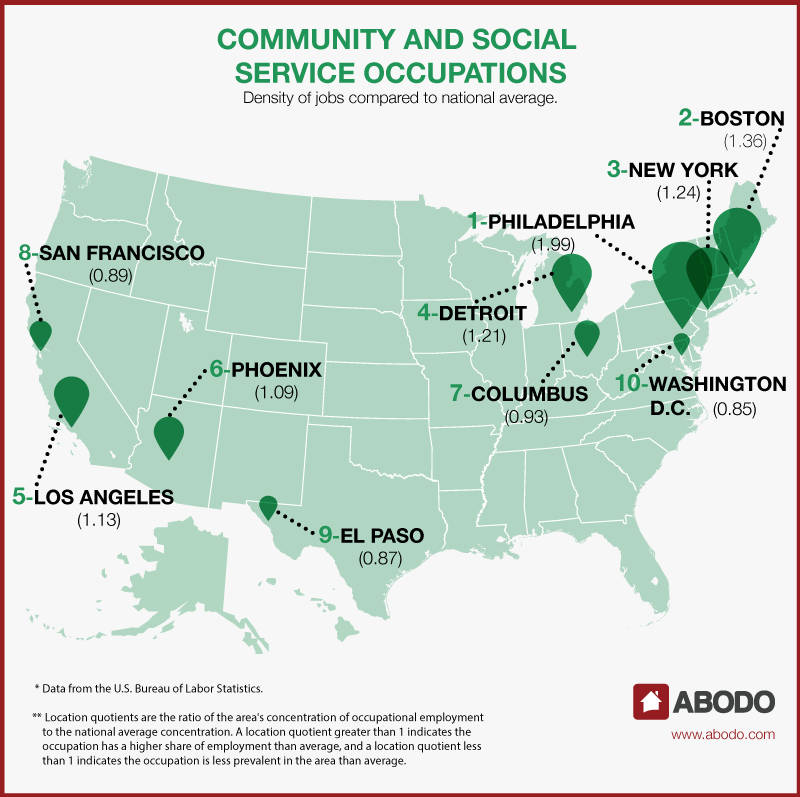 As mentioned above in the best cities for jobs graphic, community and social service saw the largest growth of any occupation category — including social workers, counselors (including behavioral disorder and substance abuse counselors), religious workers, probation officers, and similar jobs. In three years, these jobs saw their employment jump 14.61%, with more solid growth expected.

The city with the best market for community and social service occupations is Philadelphia, with a location quotient of 1.99 — meaning the density of those jobs in that area is nearly twice the national average. Boston, New York, and Detroit are also promising locales.

These jobs, however, aren’t as inextricably linked to metropolitan areas as, for example, computer and mathematics occupations might be, which would explain why some of the largest cities have a lower concentration of those jobs than the national average. San Francisco, the city with the eighth-highest concentration of these jobs, has a location quotient of just .89, below the overall national average. 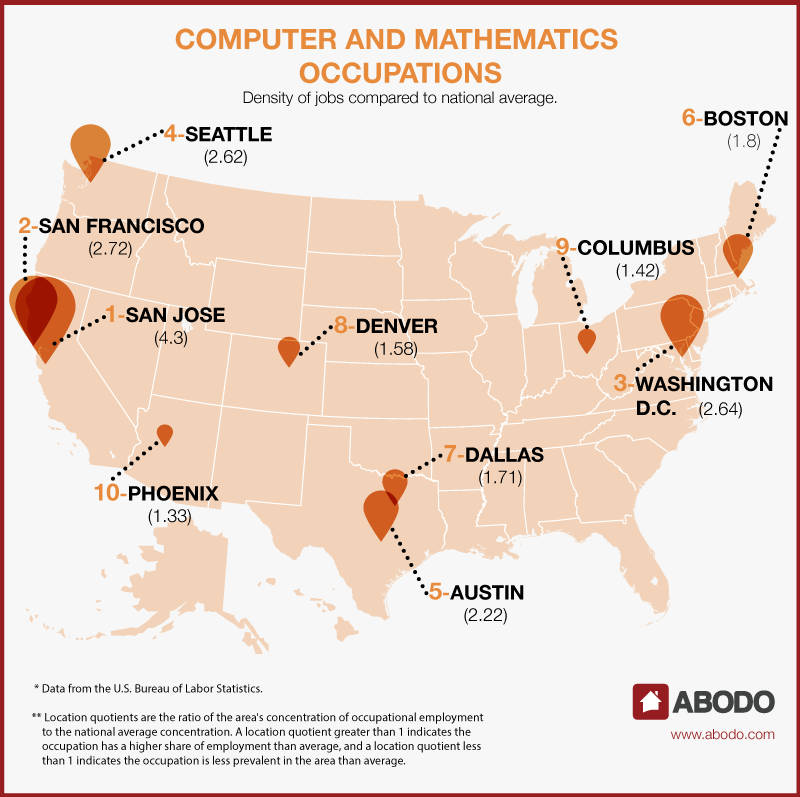 Software and web developers, support specialists, systems analysts, network administrators, programmers, and their ilk, as well as statisticians, mathematicians, and computer research scientists comprise this perpetually fast-growing category. Of all of the fastest-growing occupation categories, computer and mathematics surpasses them all when it comes to city density. San Jose, widely known as the nation’s top tech hub, has more than four times the average concentration of computer and math jobs. Just behind San Jose is San Francisco with nearly 3 times the average. Two Texas cities, Austin and Dallas — the latter of which is a budding tech center — also place in the top 10 for computer and math, as do Washington, Seattle, Boston, and Denver.

Columbus, OH, makes a somewhat surprising appearance on the list of best cities for jobs, likely stemming from a slew of new data centers sprouting up in the area by companies such as Amazon Web Services and Cologix. 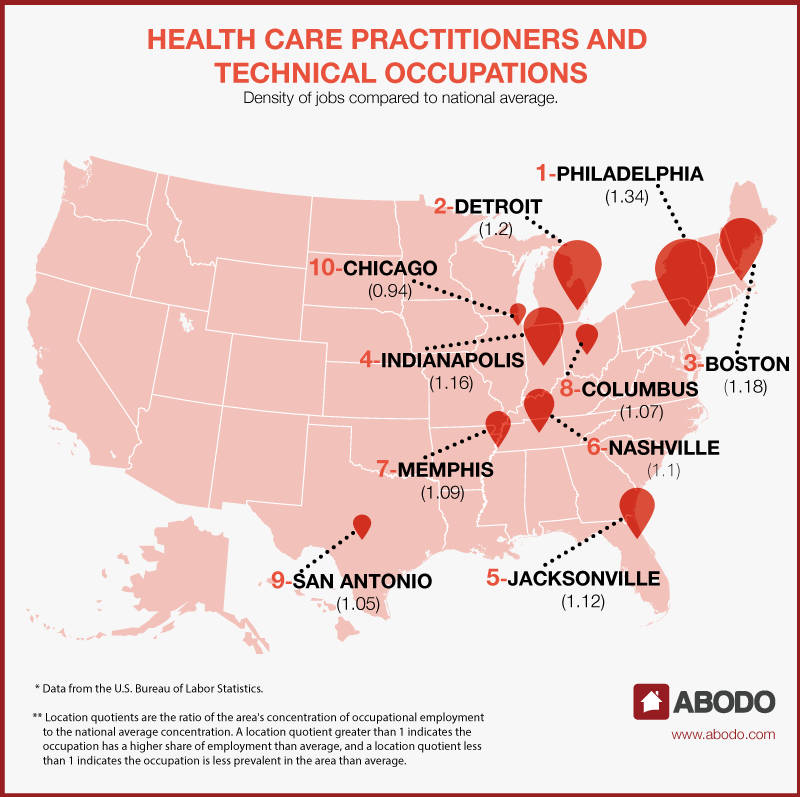 Considering its transcendent importance, this occupation category has a fairly level playing field. Nonetheless, Philadelphia and Detroit have the highest ratios. (Word to the wise: San Francisco, San Jose, and Washington D.C. are near the bottom of the list of cities hopeful health care practitioners should consider.) 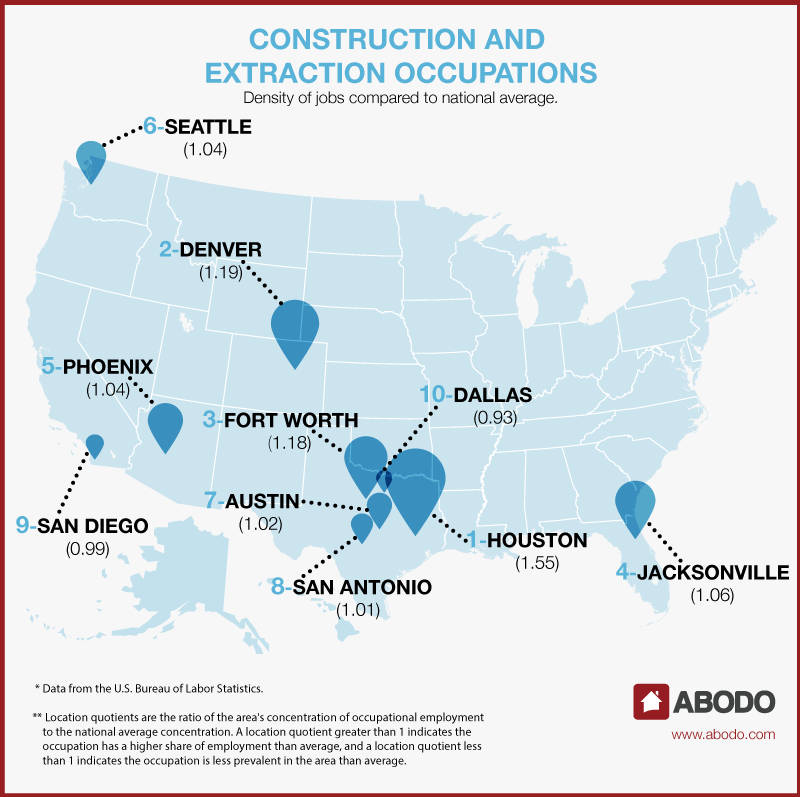 Of all the occupations on our list within the best cities for jobs report, construction and extraction are the least geographically diverse. None of the cities in our top 10 were on the East Coast or in the Midwest. Five of the top 10 cities in this category are in Texas, reflecting the state’s explosive population growth in recent years. According to the U.S. Census Bureau of Labor Statistics, five of the 10 fastest-growing cities in the U.S. are in Texas, many of them suburbs of Austin, Dallas, and San Antonio — all cities represented in this list. As populations expand, so does housing and city infrastructure.

Outside the Lone Star state, most of the numbers are somewhat closer to the national average. The exception is Denver, which is undergoing its own residential construction boom, coupled with ongoing energy projects, mostly tied to the extraction and transportation of crude oil and natural gas. 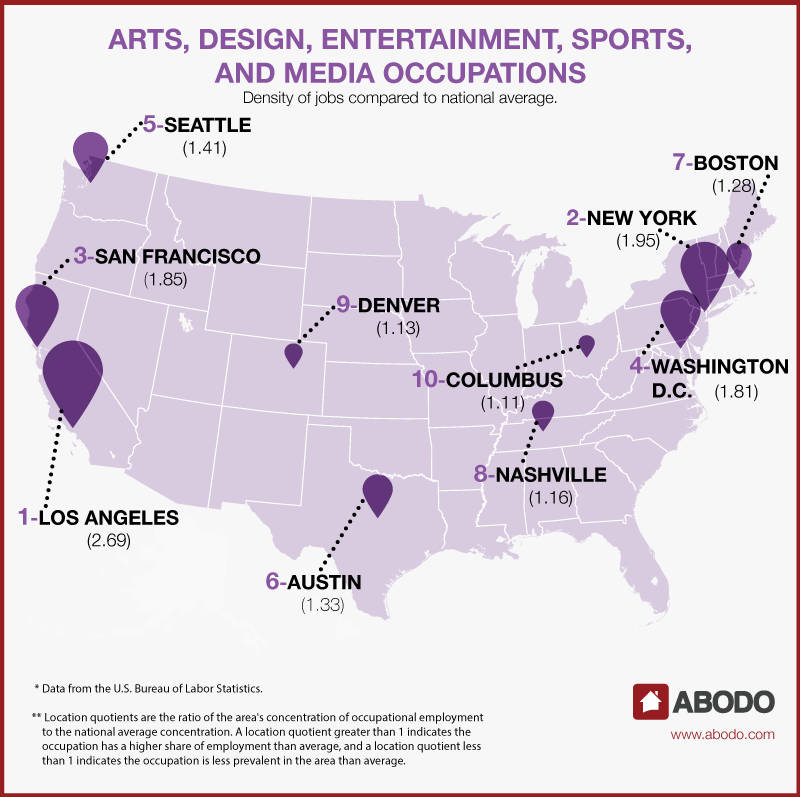 Jobs in this category — which includes actors, journalists, public relations and communications practitioners, social media specialists, designers, musicians, and professional athletes — are concentrated in large metropolitan areas dedicated to entertainment and media. Unsurprisingly, Los Angeles leads the country. Its location quotient of 2.69 reflects the extensive infrastructure of the film and television industries. Similarly, New York City — the publishing, theater, and art capital of the United States — holds an extremely high location quotient of 1.95.

This map looks like a cultural heat map of the United States, with cities like San Francisco, Seattle, Austin, and Nashville confirming their general reputations for artsy cool. One surprise on this list could be Columbus, OH, which even at the #10 spot shows a robust location quotient of 1.11. The city, home to both Ohio State and Columbus College of Art and Design, has emerged in recent years as an art and fashion mecca. In fact, Columbus employs more fashion designers than any city in the country not named Los Angeles or New York City.

As the economy continues to recover and cities diversify their economies, job hunters have more opportunities than ever to choose the city that matches best with their desired lifestyles. Our best cities for jobs data shows that the best places for the country’s fastest-growing jobs aren’t always where you’d expect them to be — and they certainly aren’t always in the largest cities. As populations in the South and Southwest continue to grow, job-seekers can expect to find even more work in rapidly-expanding markets. That’s good news for the approximately 280 million Americans (and counting) who don’t live in New York, Chicago, or L.A. — and for the country’s economic health more generally.

In our study, we didn’t dive into the idea of remote work opportunities, specifically as it relates to college students. For that, we recommend that you check out this list of online jobs for college students.

Ready to change careers? You’ll need a place to live. At Rentable, helping you find it is our job. With an extensive, accurate inventory, easy-to-use filters, and an intuitive app, Rentable helps match renters with the perfect rental for their needs. Let us find the dream apartment you’ll come to after a long day at your dream job.

All results in this article were calculated using data from the Bureau of Labor Statistics (BLS) from the years 2012 to 2015. The 22 major occupation groups, as identified by the BLS, were first ranked by the percent change in number of employees from 2012 to 2015. The average of the yearly percent change for these four years was also calculated. Both measures resulted in  an identical top five occupation categories.