Most Americans will be happy to have 2020 behind them as a tumultuous election and a simultaneous pandemic resulted in an uncertain and worrisome period fraught with dire economic predictions, worst-case health scenarios, and extreme stock market gyrations.

The price of oil technically went negative at one point, and the Dow Jones Industrial Average dropped a quick 8,000 points only to recover later in the year. The federal government’s response to the pandemic-induced economic woes was a huge stimulus package that gave cash payments to most citizens. The Payroll Protection Program–that was in effect a forgivable loan—was offered to and accepted by many businesses, both small and large. And as of this writing, a pair of rapidly developed and engineered vaccines have become available that could actually end the COVID-19 scourge.

So, what happened to one- and two-bedroom apartment rents? Nationally, on average, they went up. While some large metro areas in New York and California saw steady median rent declines, other areas trudged upward and pushed the overall national trend into positive territory.

Generally, a strong economy, strong apartment demand, and rising inflation all translate into median national apartment rent gains. In 2020, although it is recovering, the economy took a huge hit. We are still seeing strong demand, but the inflation picture is muddled as energy prices—also recovering as of late—fell early in the year and blunted inflation figures. 2020’s circumstances are unique and, in many cases, generally trusted statistical drivers have been overridden by fast-moving events.

Our stats tell the story, however, and in an effort to give renters (and potential renters) market information in close to real-time, Rentable releases monthly reports on rental trends throughout the year. This Annual Rent Report is a more drilled-down look at the year in renting. We will answer the following questions:

Let’s get into it!

Nationally, 2020 one-bedroom median rents moved higher each month with slowed movement in February, March and April followed by accelerated increases toward the end of the year. By December, one-bedroom rents had increased by a modest 3.04 percent. 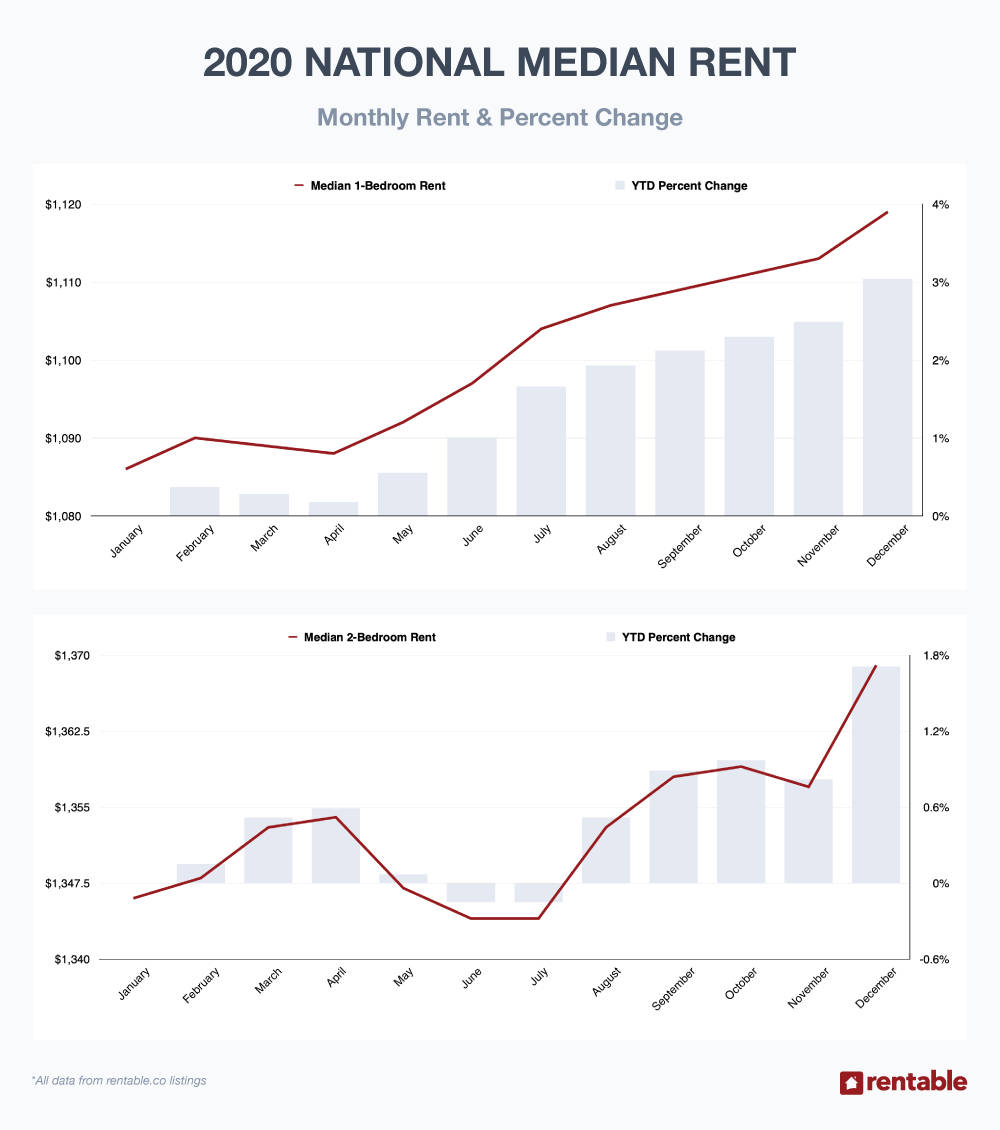 Two-bedroom units had a bumpier ride as the index went negative in June and July and finished the year with close to flat 1.71 percent rise.

Average rent increased in 39 states–and decreased in only 12, including the District of Columbia.

The biggest loser was the District of Columbia with a loss of 1.45 percent followed by Alaska where median rents fell 0.83 percent.

The highest rent hikes were seen in Vermont—3.07 percent—and Louisiana, as that state reported a modest 2.63 percent increase. 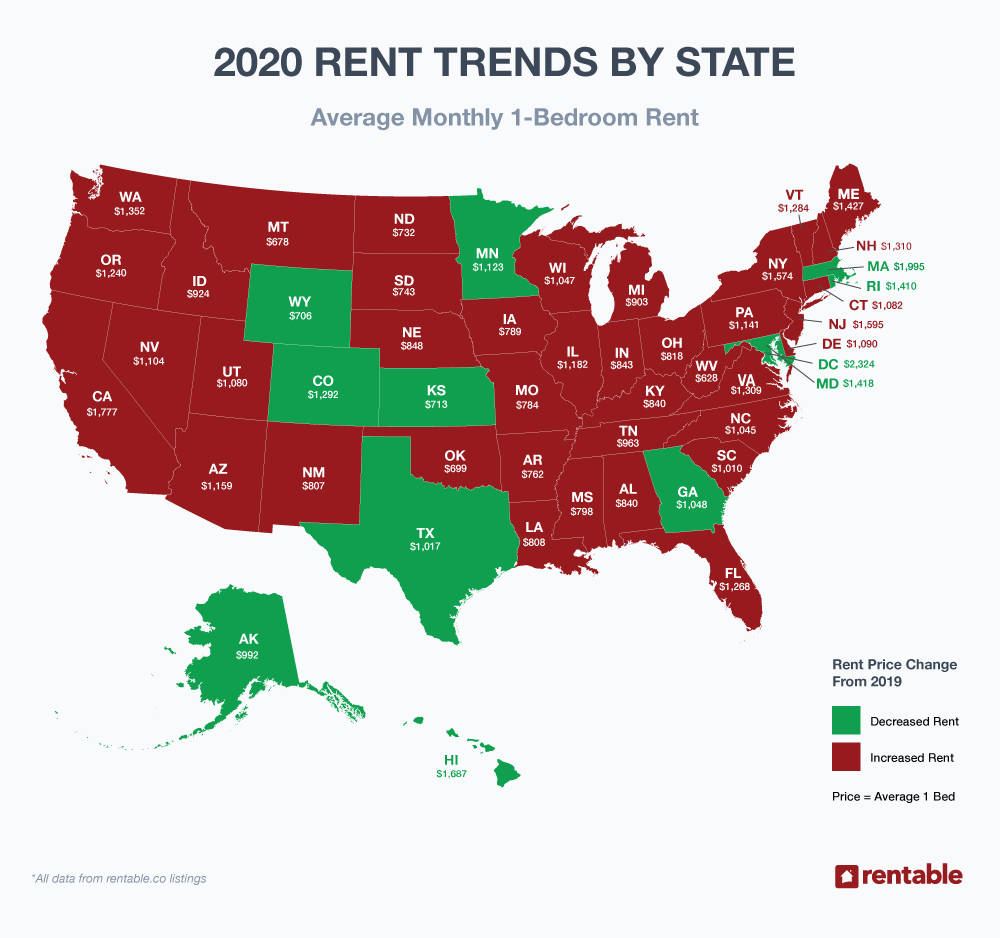 Only four states posted fluctuations of more than two percent, and all of those were gainers.

More affordable rents like the following could be found across the nation:

Looking at statewide and national rental data gives us a good idea of what trends renters around the country are seeing. But when we take a closer look city-by-city and by apartment type, a more diverse set of trends emerge. The following stats track the top ten average monthly rent changes—a measure of volatility.

The bottom five on our gainers list, Syracuse, NY, Rochester, NY, Cincinnati, OH, Colorado Springs, CO and Jacksonville, FL are were in a tightly packed range, each moving upward between 1.71 and 2.19 percent monthly.

Fort Lauderdale proved to be the most expensive place to live on our list at $1,590 while Syracuse, NY was the most affordable at $844. 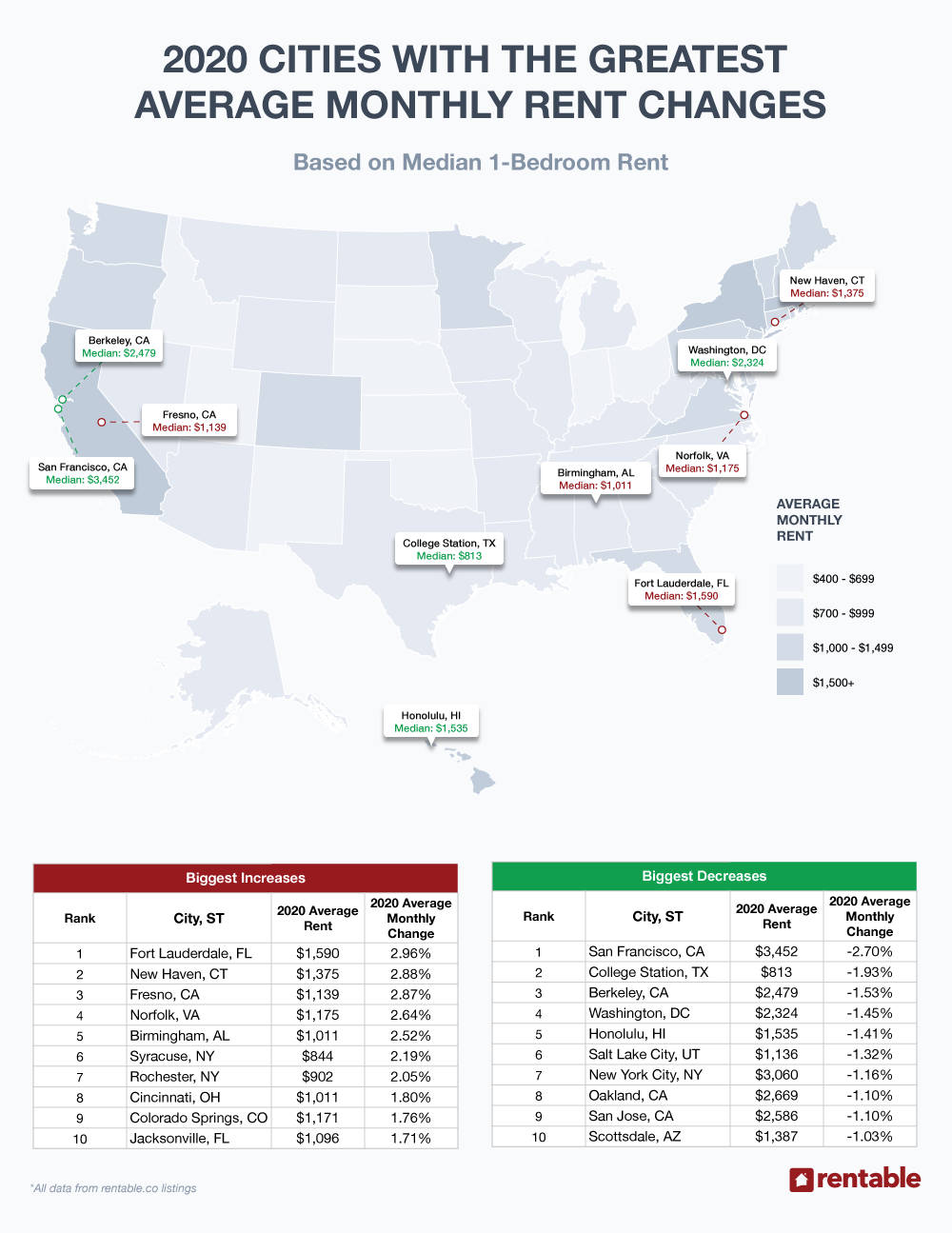 San Francisco was the priciest locale on our monthly average decreasers list at $3,452 while College Station, TX was by far the cheapest at $813.

Fort Lauderdale, FL by far boasted the highest priced 2-bedroom unit on this list at $1,900. First place Detroit, MI was the most wallet-friendly–just under a thousand dollars at $957. 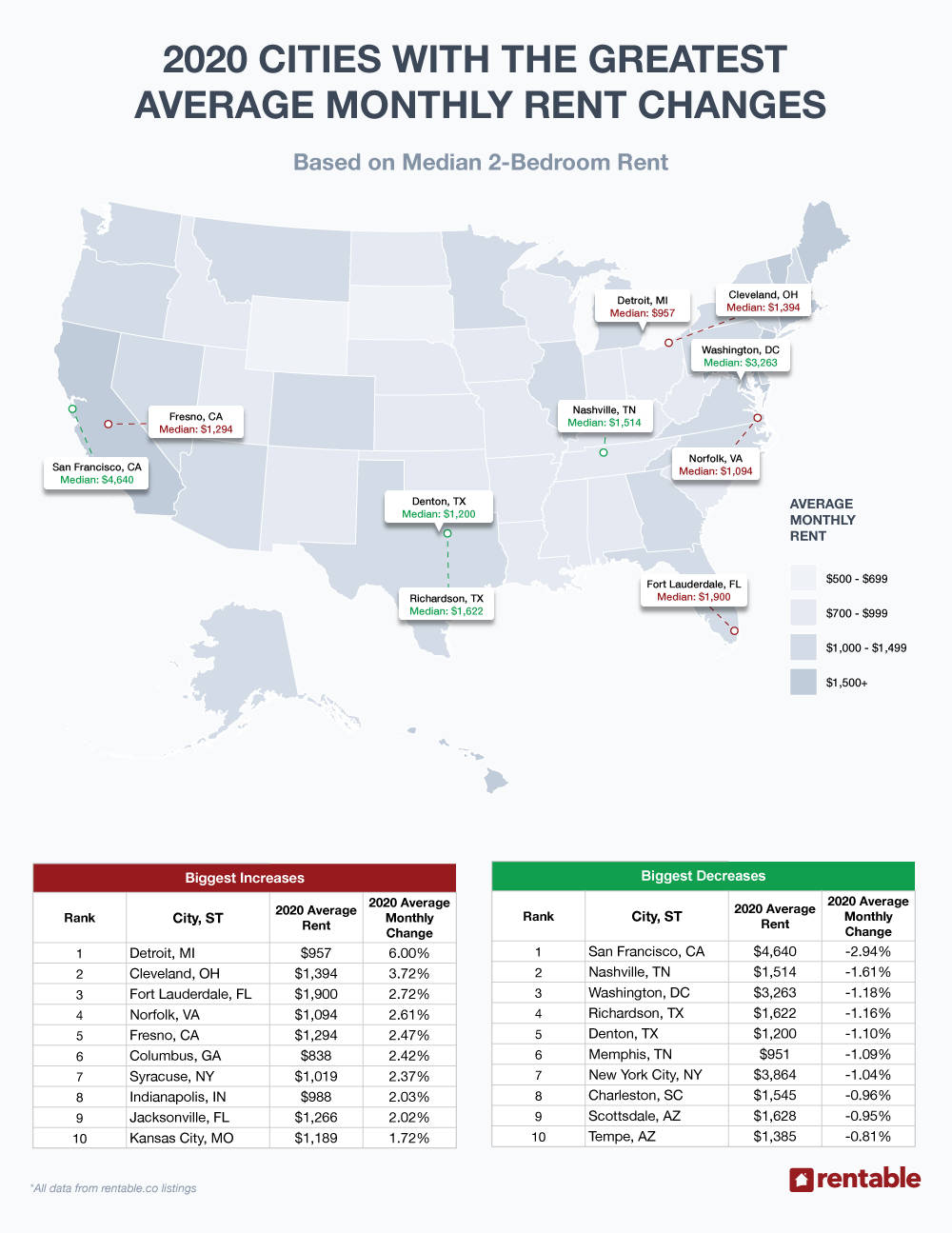 San Francisco was the most expensive locale on our monthly average decreasers list at $4,640 while Memphis, TN was by far the most reasonably priced at $951.

Across the country, from coast-to-coast, rent prices have continued to rise. Whether a person is renting in San Francisco, New York or Chicago, they have come to expect extremely high prices. Here’s what happened in 2020d in terms of cities with the highest and lowest rent prices. 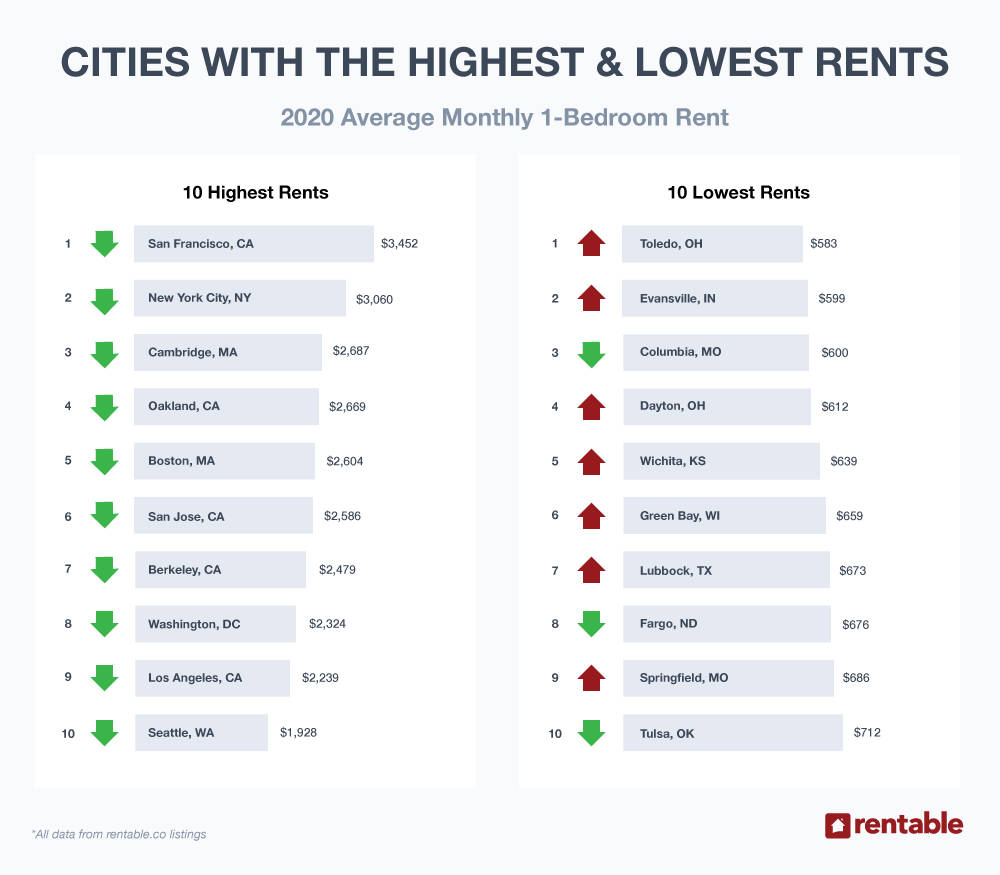 If the pricey $3,452 San Francisco rent is not an option, head to Toledo, OH for affordability because you can get a one-bedroom apartment there for less than $600 at $583. Evansville, IN is also a good choice for frugal apartment hunters at $599. Columbus, OH, at $600, was just about steady for the year with an average monthly decrease of just 0.07 percent.

Placing fourth after those top three one-bedroom lowest rent cities was Dayton, OH with a very consumer-friendly $612 monthly average 2020 rent. Wichita, KS, and Green Bay, WI reported respective rents in the mid-$600 range at $639 and $659 Lubbock, TX is a great value with an average $673 rent, and Fargo, ND—with a minimal monthly average loss of 0.48 percent—is still affordable at $676 Finally, Springfield, MO at $686 and Tulsa, OK at $716 both made our top ten average monthly lowest rent list.

In January, our top ten increasers showed a wider range than our top ten decreasers. This tells us that there is upward pressure on median monthly rent prices. Let’s look at the specifics: 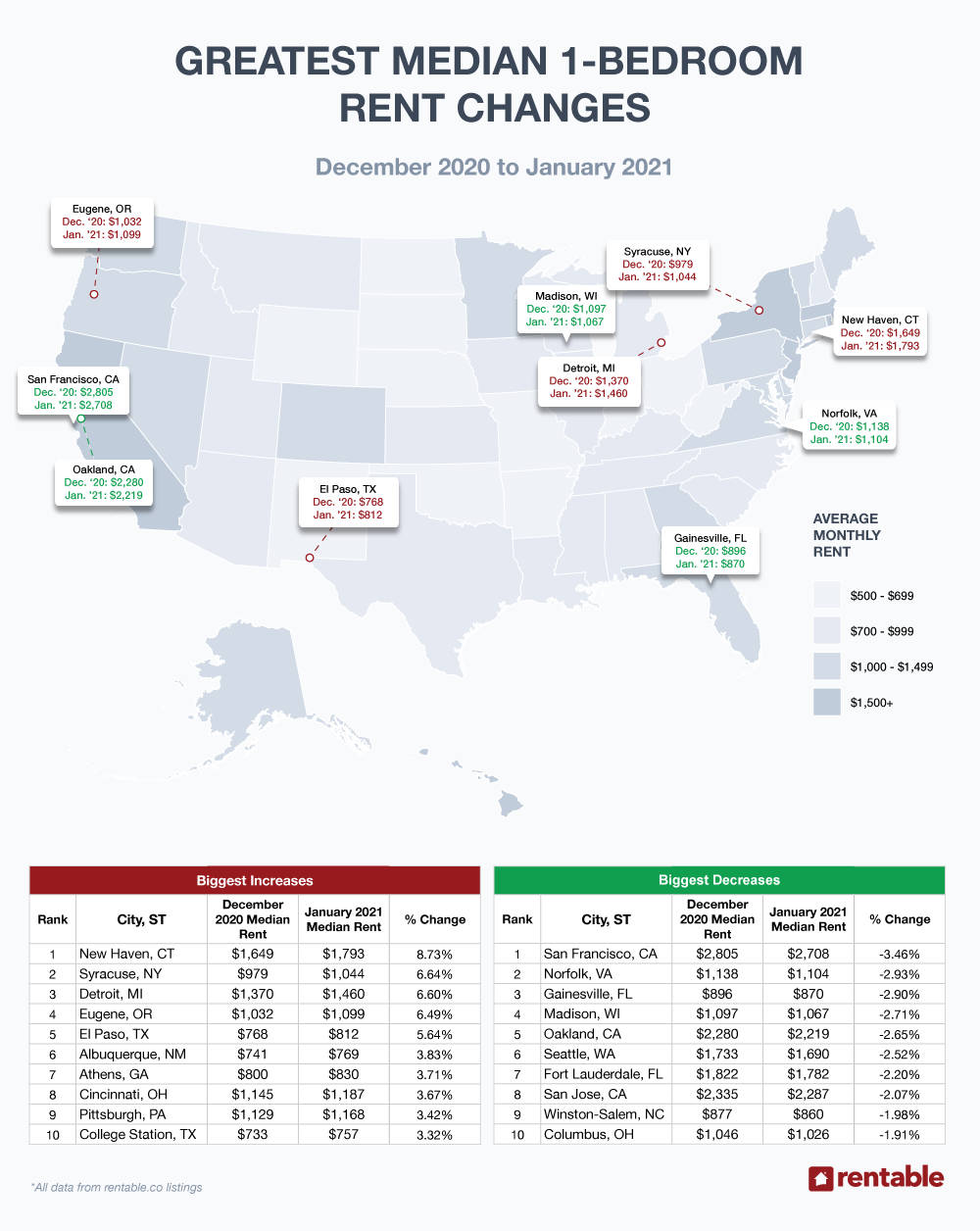 San Francisco, CA, continued its pandemic-driven monthly losses that began in mid-2020 as its January median one-bedroom rent fell another 3.46 percent to $2,708, an astounding drop of approximately $700 from its 2020 high.

Also in the 5 percent arena was Wichita, KS at a median $778. Boulder, CO rose a not-insignificant 4.4 percent to an increasingly expensive $2,490. College Station, TX took seventh place with a 4.38 percent gain. And Santa Ana, Athens, GA and Toledo, OH LA all gained between 3.63 and 4.17 percent. Of those, Santa Ana was the priciest reporting a median rent of $2,683. 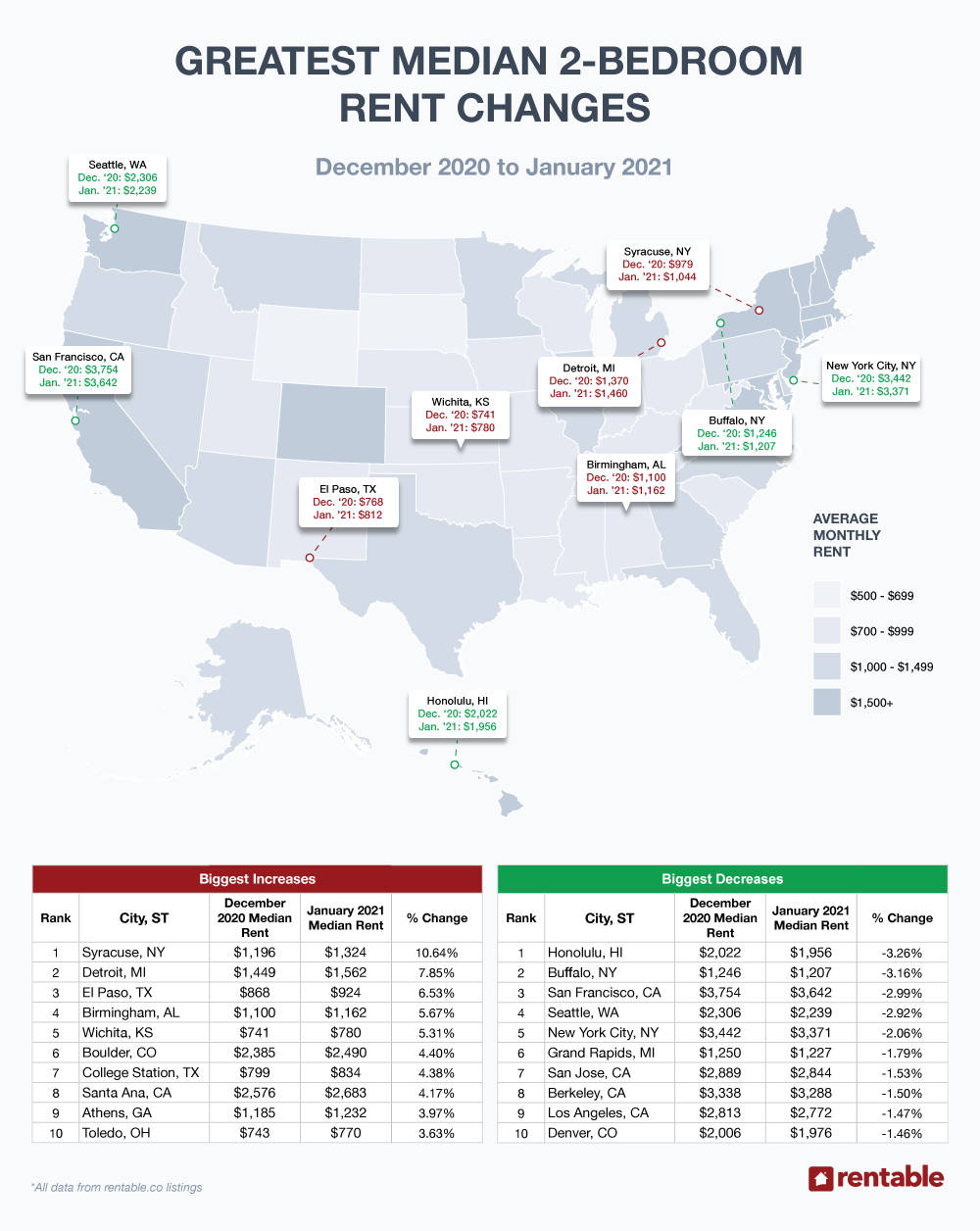 As we sometimes see in a rising market, losers fell less than gainers rose, and that pattern is very apparent in our January 2021 stats. Honolulu, HI fell only 3.26 percent while Buffalo, NY lost 3.16 percent at $1,207.

The pandemic is still raging but the vaccines have arrived. The presidential election results are finally clear to most, and the stock market is still flirting with all-time highs. The price of oil has rebounded close to the $50 mark.

If things continue to move in this positive direction, we look for solid apartment rental increases in 2021, barring any more major disasters and calamities.

Each month, using over 1 million Rentable listings across the United States, we calculate the median 1-bedroom and 2-bedroom rent price by city, state, and nation and track the month-over-month percent change. For this report, we analyzed this data for the entire year of 2020 and found the average of the monthly percent changes in list price separately for each state and city. We also calculated the 2020 average list price in each state by taking the average of all monthly average list prices.

To view Rentable’s annual reports from previous years, please follow the links below: