Fueled by an economy that refuses to weaken, one-bedroom US median rent prices increased by 4.1 percent, while two-bedroom prices rose by 5.5 percent.

Inflation has been checked at approximately 2.1 percent—a very manageable rate. Higher inflation can be an indicator of an overheating economy, but that is not the case—at least not yet.

Unlike 2018, where the Fed began to raise interest rates, 2019 has seen interest rates leveling, and mortgage rates also fell from their highs. New job creation has been stellar with over 266,000 jobs added in November.

Some forces that would drive apartment rental price increases are:

In 2019, these factors were balanced by lower mortgage rates that nudged some renters to become homeowners, and by an ever-increasing supply of apartment units as developers brought over 330,000 units online.

In an effort to give renters (and potential renters) market information in close to real-time, Rentable releases monthly reports on rental trends throughout the year. Our Annual Rent Report is a more zoomed-out look at the year in renting.

Let’s start with a look at what happened nationwide:

Nationally, one and two-bedroom 2018 rents rose steadily, faltered in the third quarter, and then trended higher. The national median rent for one-bedrooms rose 4.1 percent, ending the year at $1,078. Rents for two-bedroom apartments stood at $1,343 in December reflecting a solid 5.5 percent gain. 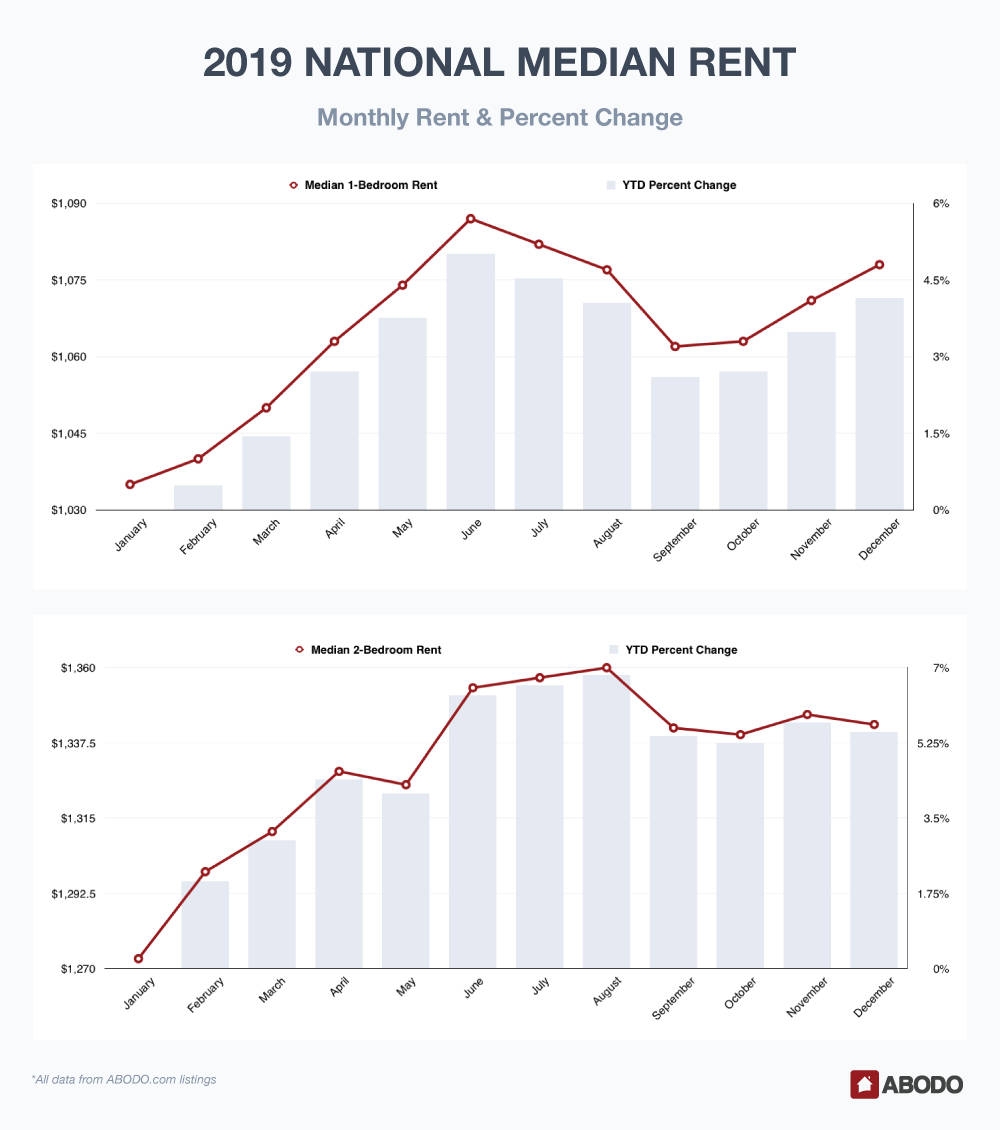 One-bedrooms quickly gained over 5 percent by June, then lost almost half of that gain by October only to rebound at the end of the year. Two-bedrooms followed the same pattern albeit with less-pronounced declines. Two-bedroom highs were seen in August with a 6.83 percent YTD gain that moderated slightly to 5.5 percent at year-end.

Rent increased in 39 states—including the District of Columbia—and decreased in only 12.

The biggest loser was Montana with a small loss of 1.6 percent, followed by Nevada where rents fell 1.44 percent.

The highest rent hikes were seen in Utah—3.78 percent, and in Wisconsin, as the Badger State reported a significant 3.02 percent increase. 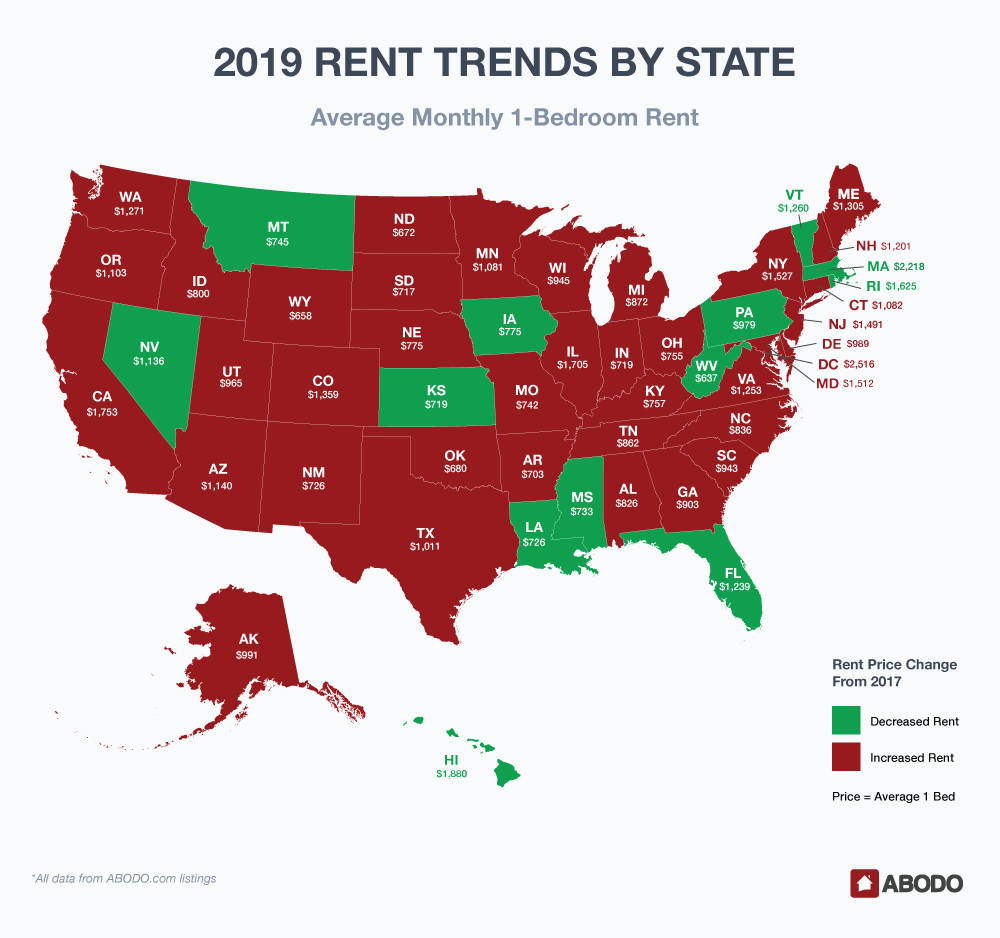 Only six states posted fluctuations of more than two percent, and all of those were gainers.

Highest rents were found on the coasts and in Hawaii as Washington, D.C. topped the nation with an expensive one-bedroom apartment at an average $2516. Massachusetts followed at $2218 and Hawaii came in third with an average rent of $1880.

Looking at statewide and national rental data gives us a good idea of what trends renters around the country are seeing. But if we take a closer look city-by-city and by apartment type, a more diverse set of trends emerge.

One tendency, however, remains the same: Rent increases outpace the decreases.

The 2019 yearly one-bedroom increase winner? Surprisingly, Detroit, MI rose an average of 7.48 percent to an affordable $886. Cleveland, OH followed, but with a much smaller increase of 3.85 percent to a reasonably priced $782. The next four cities on our list, Mesa, AZ, Oakland, CA, Fort Worth, TX and Rochester, NY were tightly bunched as they reported respective increases of 2.57, 2.47, 2.39 and 2.34 percent. Salt Lake City, UT, Eugene, OR, and Little Rock, AR rounded out the top ten 2019 average rent gainers with small increases at or slightly below 2.05 percent. 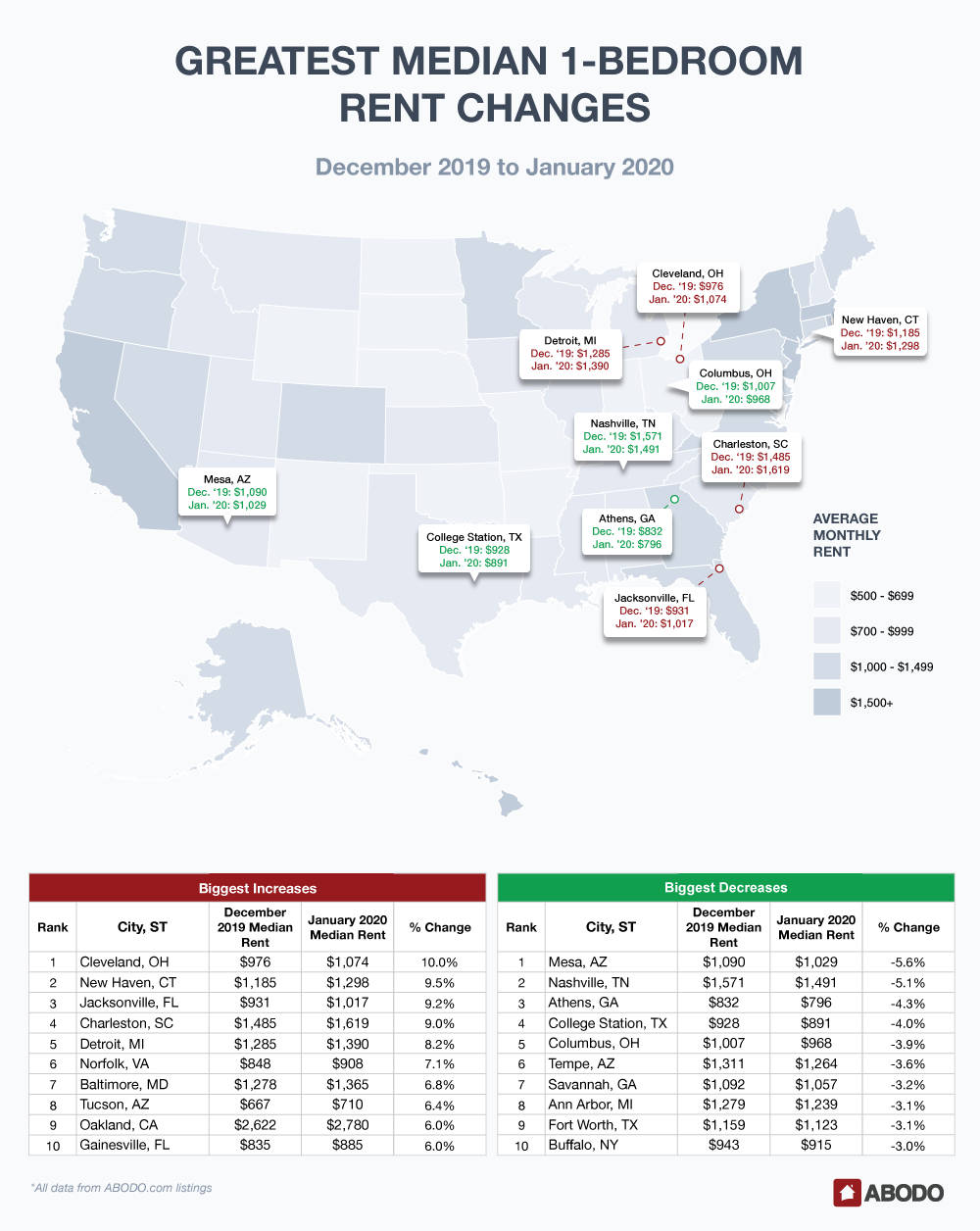 The last four cities on our biggest one-bedroom decreaser list had insignificant losses ranging from .56 to .2 percent, and these were Wichita, KS, Louisville, KY, Cambridge, MA and New Orleans, LA.

Mesa, AZ was the 2019 average monthly change leader with a 3.23 percent increase to $1347. Buffalo, NY was close behind with a 3.18 percent gain followed by Cleveland, OH reporting an increase of an even 3 percent. Oakland, CA was relatively strong rising 2.86 percent to a hefty $2964, and St Paul, MN, Fort Worth, TX and New Orleans, LA managed gains of slightly over 2 percent.

Gainesville, FL, Rochester, NY and Winston-Salem, NC rounded out the biggest increaser list with modest rises between 1.87 and 1.94 percent. 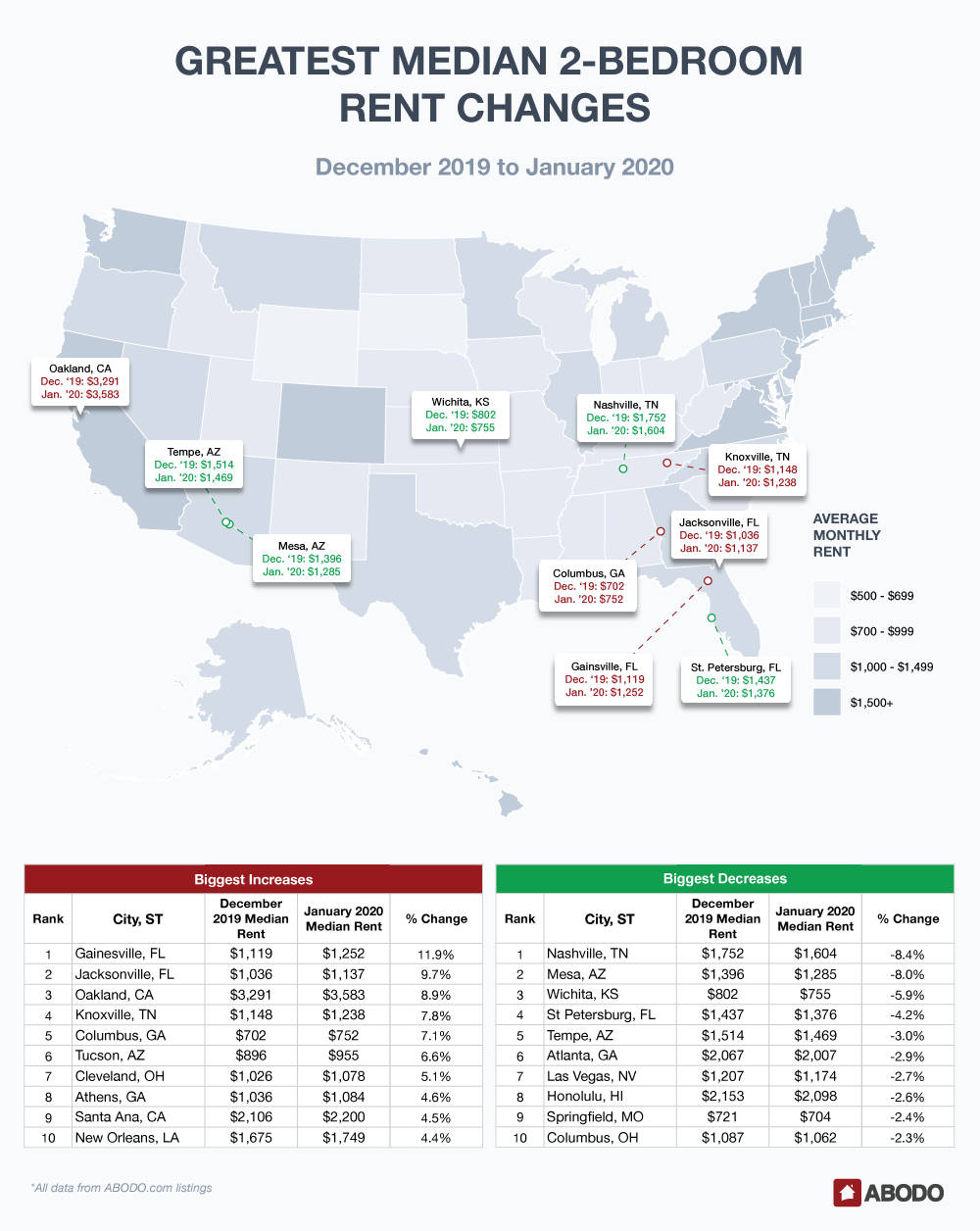 2019 average annual two-bedroom losers showed a wider range as Little Rock, AR fell 4.64 percent to $1467 and Scottsdale, AZ lost 3.57 percent. Los Angeles, CA and Las Vegas, NV were either slightly over or slightly below the 3 percent decline mark, while Dayton OH posted a loss of 2.4 percent. The next three of our top ten 2019 two-bedroom losers posted unexciting losses led by Long Beach, CA falling 1.85 percent to $2478, Louisville, KY dropping 1.19 percent to $1152, and Atlanta, GA reporting a loss of 1.12 percent. Finally, Chicago, IL and Houston TX both fell just below 1 percent.

Across the country, from coast-to-coast, rent prices have continued to rise. Whether a renter is paying in San Francisco, New York or Chicago, they have come to expect extremely high prices. Here’s what happened in 2019 in terms of cities with the highest and lowest rent prices.

Two other California cities–Los Angeles at $2465 and Oakland at $2311 appeared on our 10 Highest Rents list in eighth and ninth place. Finally, Boulder, CO, at $1823 placed tenth on our list. Interestingly, Los Angeles, CA still placed eighth on our list even though it posted a 2.27 percent YTY decline. 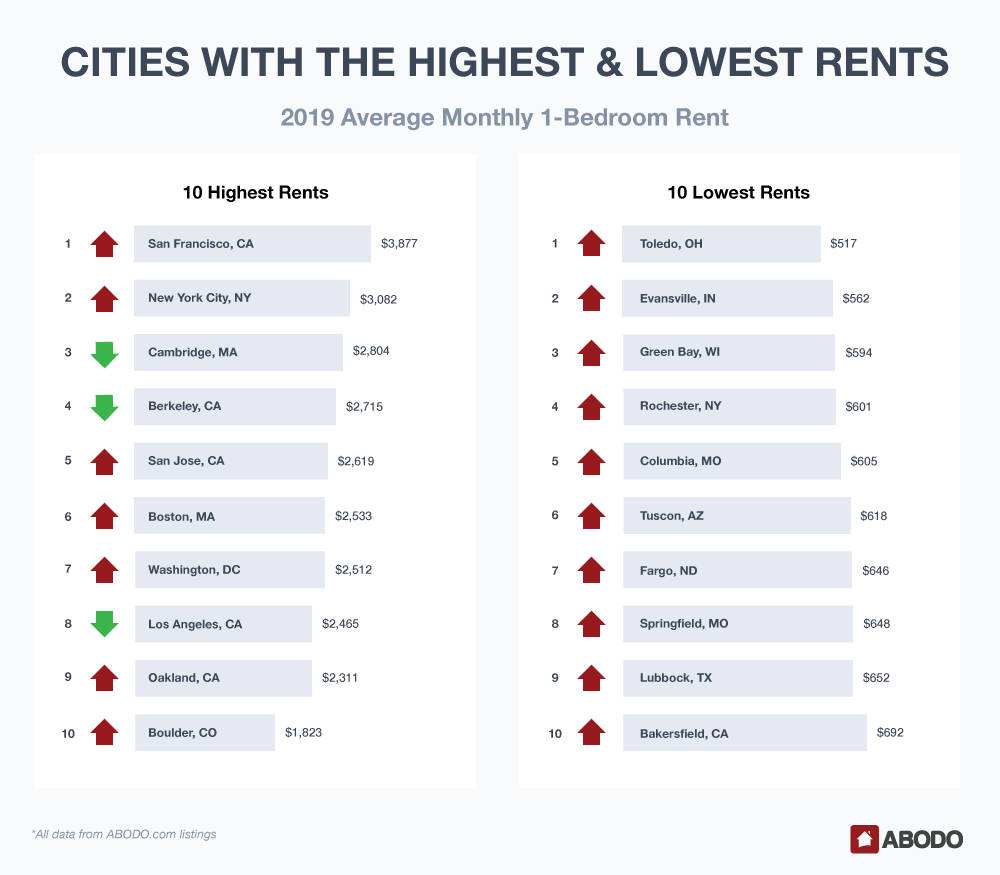 If the pricey $3877 San Francisco rent is not an option for you, head to Toledo, OH for affordability because you can get a one-bedroom apartment there for just over $500 at $517. Evansville, IN is also a good choice for frugal apartment hunters at $562. And where in the world can you live in a major sports city’s one-bedroom apartment for under $600? Green Bay, WI of course!

Placing fourth after those top three one-bedroom lowest rent cities was Rochester, NY with a very friendly $601 monthly average 2019 rent. Columbia, MO, and Tucson, AZ also are listed in the low $600 range at $605 and $618. As expected, Fargo, ND is a great value with an average $646 rent, and Springfield, MO—despite a 2.15 percent yearly rise—is still affordable at $648. Finally, Lubbock, TX and Bakersfield, CA made the top ten lowest rent list while staying under $700 at $652 and $692 respectively.

In January, the top one-bedroom winner reported a double-digit increase while the losers were tightly bunched with a range from 3 to 5.6 percent. When gainers gain more than losers lose, we consider that a trend indicative of an upward market move.

Cleveland, OH posted a strong 10 percent gain to begin January at a median rent of $1074. New Haven, CT, Jacksonville, FL and Charleston, SC followed with increases in the 9 to 9.5 percent range. Detroit, MI rose a surprising 8.2 percent to $1390, and inexpensive Norfolk, VA gained a big 7.1 percent breaking the $900 mark to $908.

As we previously mentioned, the top-ten one-bedroom losers reported their losses in a tight range. Mesa, Az was number one with a modest 5.6 fall, and Nashville, TN dropped 5.1 percent to a median $1491. Affordable Athens, GA reported a 4.3 percent drop, and College Station, TX fell an even 4 percent to $968.

The following cities fell 3 to 3.6 percent:

Warm and sunny Gainesville, FL reported a January 2020 median rent of $1252, up a big 11.9 percent. Another Florida city—Jacksonville—rose 9.7 percent to take second place on our two-bedroom gainers list. Oakland, CA was alone in third place with an 8.9 percent gain to an expensive $3583, and Knoxville, TN reported a 7.8 increase.

Also, in the 7 percent arena was Columbus, GA at a median $752. Tucson, AZ rose a significant 6.6 percent to a still-inexpensive $955. Rock n’ Roll Hall of Fame home Cleveland, OH took seventh place with a 5.1 percent gain. And Athens, GA, Santa Ana, CA and New Orleans, LA all gained between 4.4 and 4.6 percent. Of those, Santa Ana was the priciest reporting a median rent of an even $2200.

Tempe, AZ and Atlanta, GA each lost 3 percent or a little less, and Las Vegas, NV, Honolulu, HI, Springfield, MO and Columbus, OH all fell from 2.7 to 2.3 percent respectively.

Each month, using over 1 million Rentable listings across the United States, we calculate the median 1-bedroom and 2-bedroom rent price by city, state, and nation and track the month-over-month percent change. For this report, we analyzed this data for the entire year of 2019 and found the average of the monthly percent changes in list price separately for each state and city. We also calculated the 2019 average list price in each state by taking the average of all monthly average list prices.