Last month we noted a significant downward trend in both one and two-bedroom units median rents. In October we saw a more moderate picture as:

Let’s get into specifics: 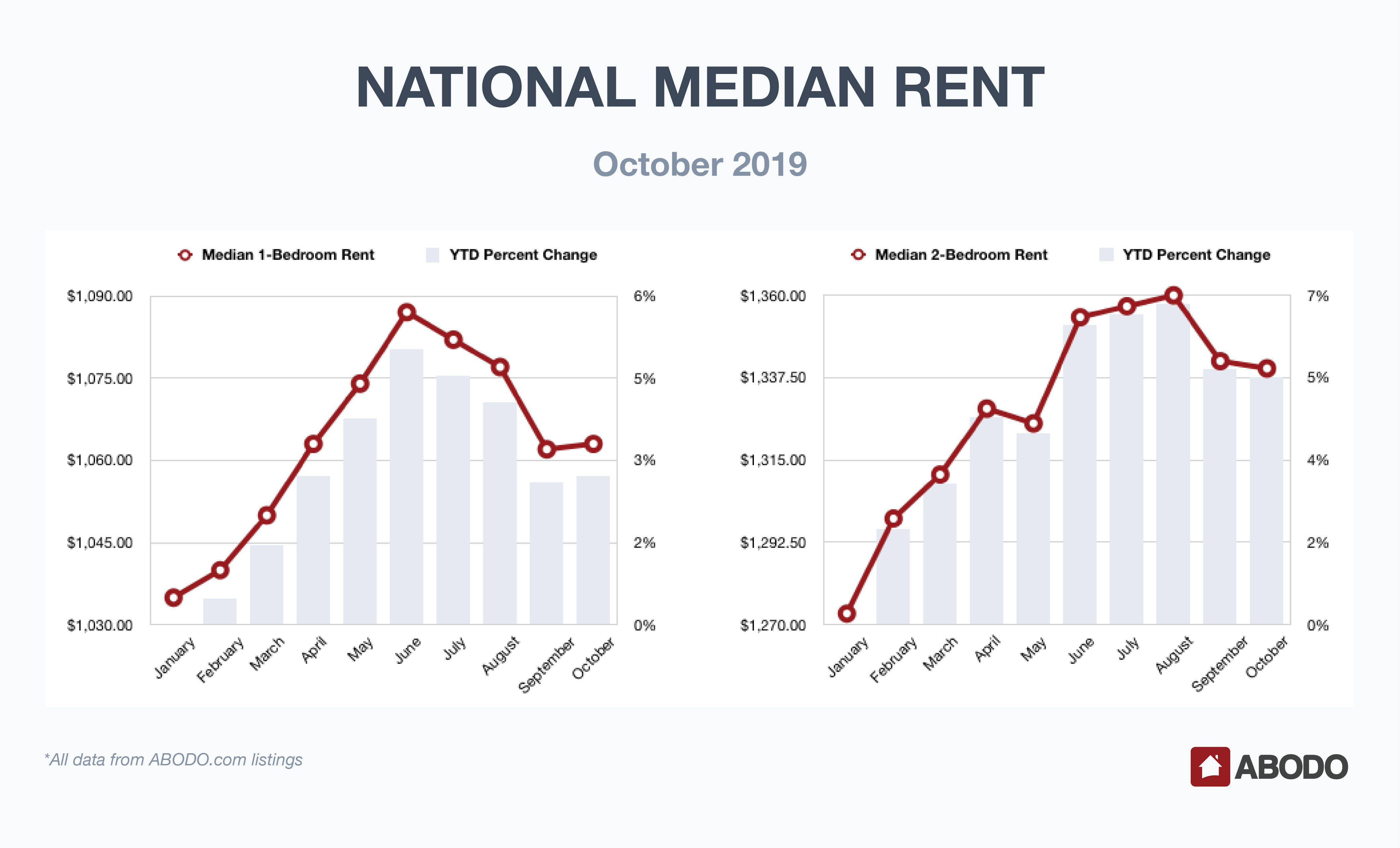 Median one-bedroom apartments tacked on a small .10 gain on to remain in positive 2019 territory with a yearly rise through October of 2.71 percent to a median rent of $1063.

Another Texas town, Richardson, rose 2.6 percent to $1205 while Buffalo, NY came in tenth with a little 2.3 percent increase. The most affordable city on our top ten gainers list was Oklahoma City, OK at $763. 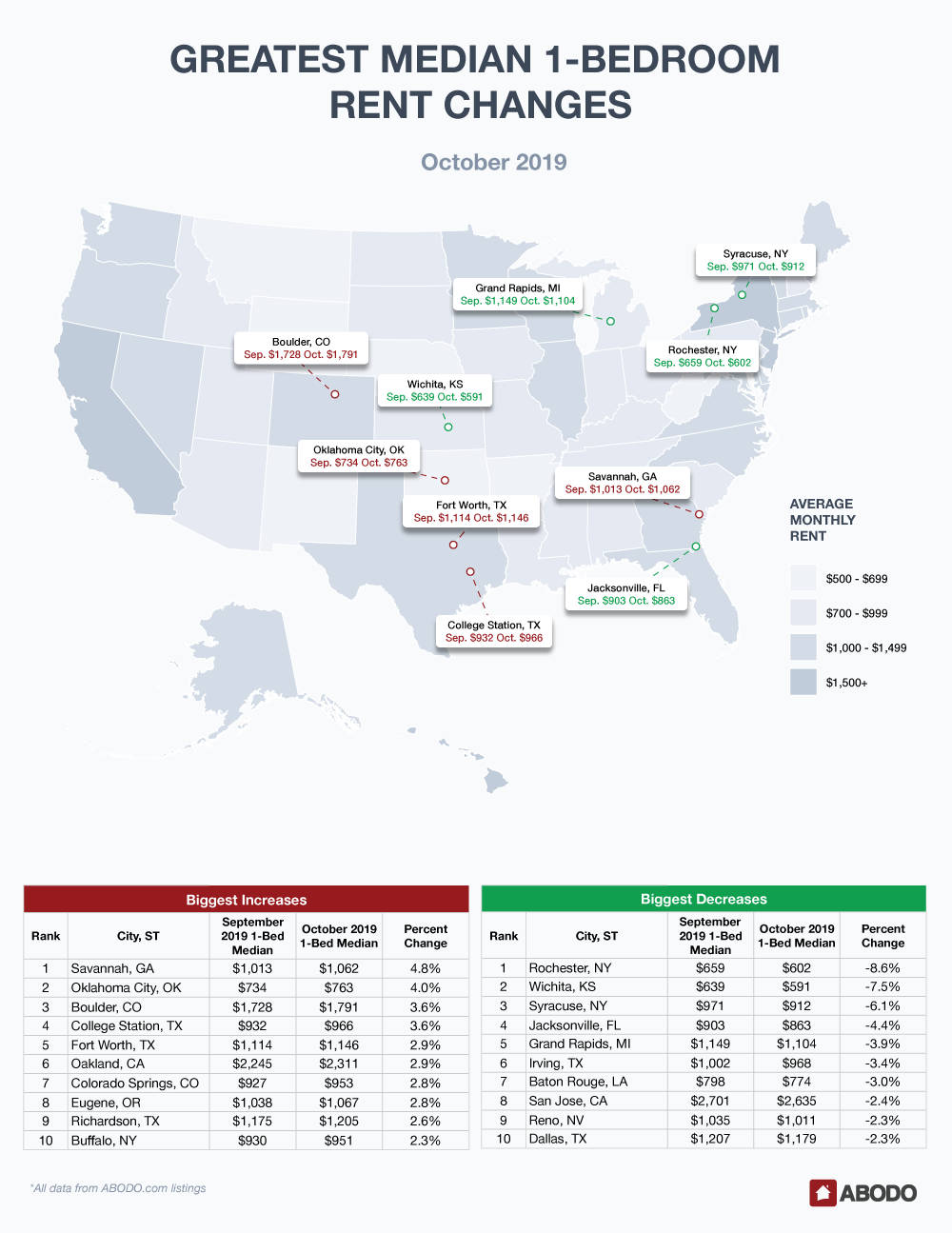 Rochester, NY led the one-bedroom losers with a stout 8.6 percent decrease to a low $602 median rent. Wichita, KS came in second with a fall of 7.5 percent to a cheap $591 per month—cheaper than it costs to rent a parking spot in some major cities!

Syracuse, NY reported a 6.1 percent drop and placed third on our list of losers.

The bottom three cities, San Jose, CA, Reno, NV and Dallas, TX all decreased by 2.3 to 2.4 percent. The most expensive location on our top ten losers list was San Jose, CA at a jaw-dropping median price of $2635, down from $2701 in September.

The charts for two-bedroom apartment gainers and losers showed a similar range as double-digit increases or losses were absent. Gainers showed increases of 2.1 percent to 7.4 percent, and losers posted declines of 2.3 percent to 6.5 percent.

Cleveland, OH gained 7.4 percent to lead the list, and Buffalo, NY came in second with a 5.5 percent increase to $1095. Cincinnati, OH, Boulder, CO and Fort Worth, TX all posted increases between 4.0 to 4.3 percent.

Alone in sixth place was Minneapolis, MN with a modest 3.9 percent rise to $1979. Wichita, KS reported a small 2.5 percent gain, and Toledo, OH also rose 2.5 percent to a still amazingly affordable $662. Both Mesa, AZ and Nashville, TN increased by 2.1 percent.

On this list, Boulder, CO was the most expensive place to rent a two-bedroom apartment in October at $2116. 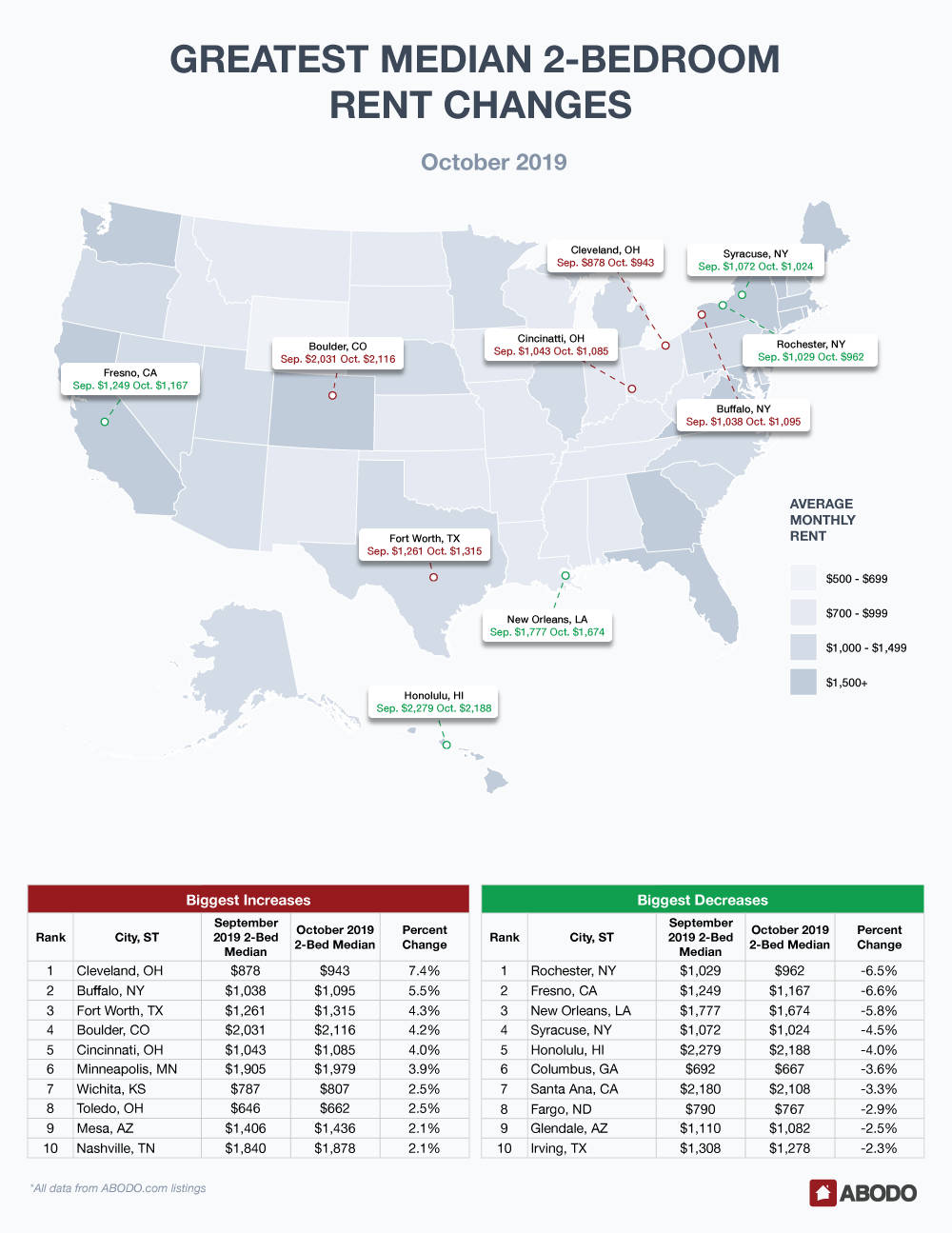 Two-bedroom losers were tightly bunched in a 2.3 to 6.6 percent range.

Fresno, CA led the list with a 6.6 percent loss to $1167. Rochester, NY claimed the second biggest loser prize with a fall of 6.5 percent while New Orleans, LA fell a significant 5.8 percent to $1674.

The cheapest place to rent a two-bedroom apartment on our top ten losers’ list was Columbus, GA at $667.

Last month, even though we saw significant September declines, we said, “we are not throwing in the towel yet,” and we’re glad that we didn’t because October merely showed a flattening trend.

We survived an oil spike and seemingly constant geo-political tensions. With impeachment proceedings lurking, we are anything but comfortable, but we just do not see a recession beginning any time soon.

Both one and two-bedroom units are still in positive territory for the year, and we think that the generally flat and unexciting national median rent trends will continue.

Tune in next month to see if the rental market surprises us with a sharp upward or downward move.