Last month we outlined continued one-bedroom rent weakness although we noted that two-bedroom units had bucked that trend. This month, however, we are seeing a definite downward trend as:

Let’s get into specifics: 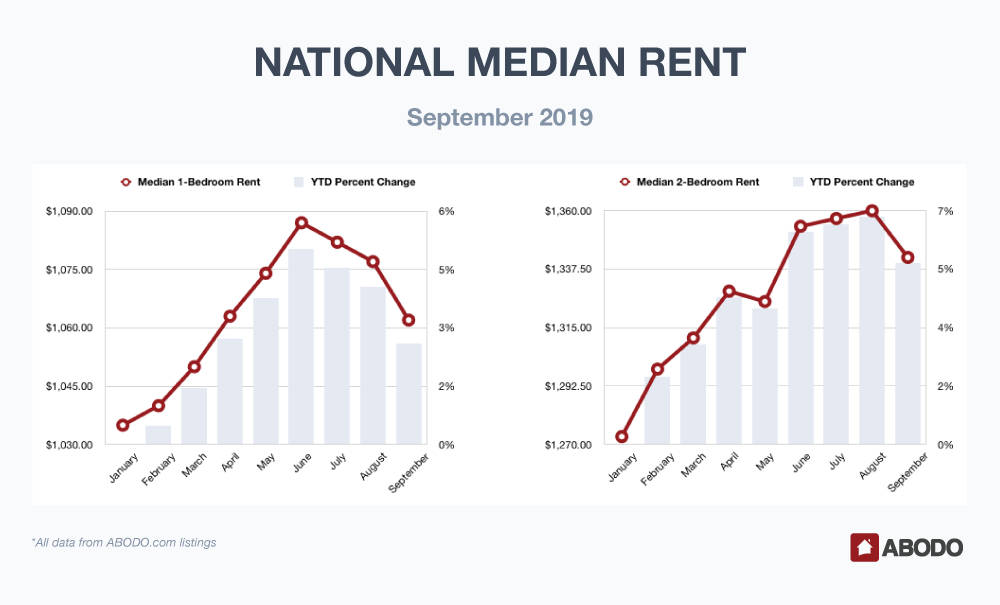 Median one-bedroom rents, while still up 2.61 percent for the year are almost 50 percent off the July peak when one-bedroom units reported a median 5.02 percent yearly gain.

Fargo, ND, our top one-bedroom gainer could only muster a 5.9 percent increase in September. Cleveland, OH gained 5.3 percent to a median $913, and Fort Worth, TX rose 5.0 percent to $1,114. El Paso, TX and Green Bay, WI—two very affordable cities—rose moderately by a respective 4.6 and 4.1 percent.

College Station, MD was the only other top ten gainer to even break the three percent gain range with a rise to $932. 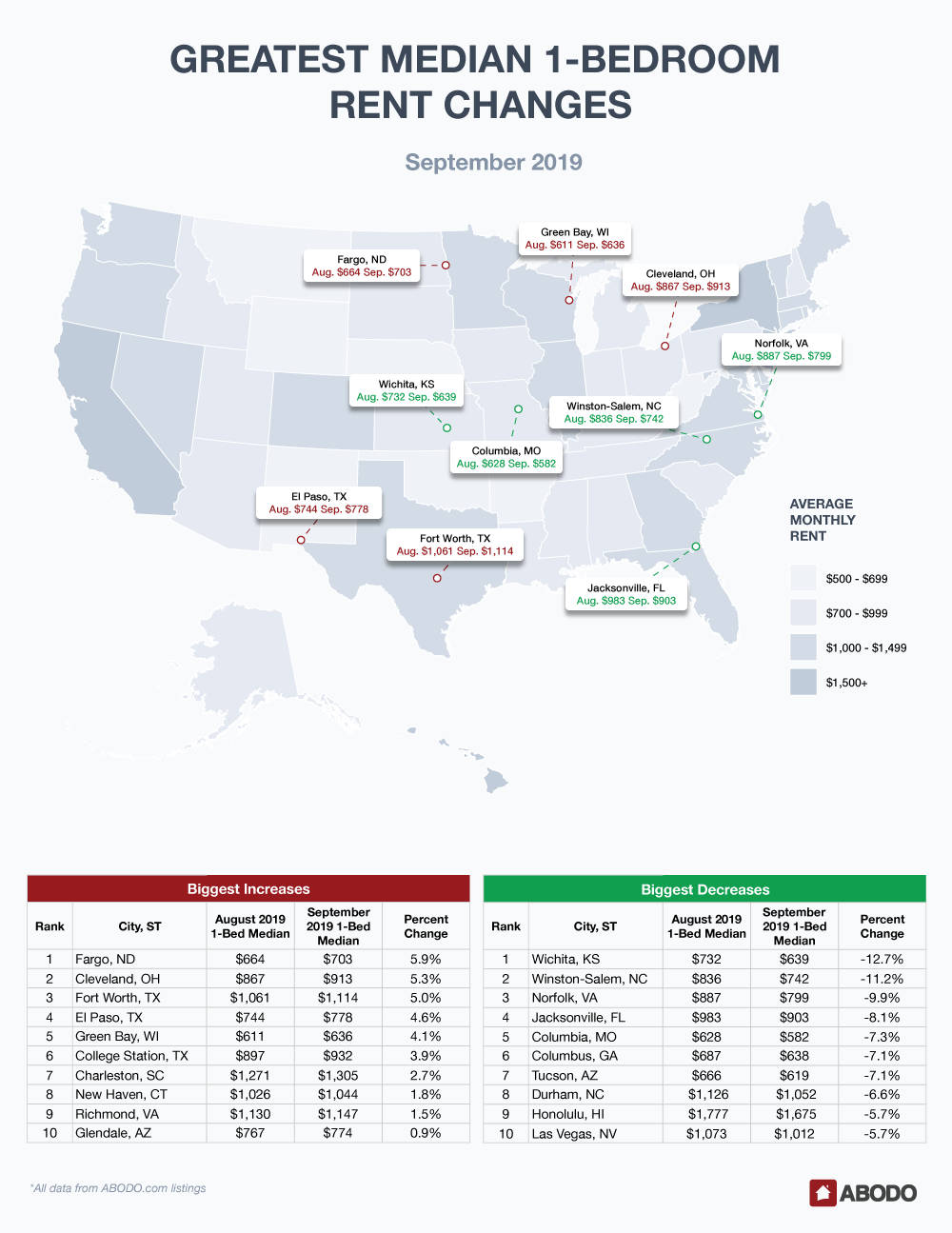 Columbia, MO, Columbus, GA, and Tucson, AZ all between 7.1 and 7.3 percent. Rounding out our top ten one-bedroom loser list we see that Durham, NC, Honolulu, HI, and Las Vegas, NV fell between 5.7 and 6.6 percent with Honolulu winning the prize for the most expensive median rent at $1,675.

Columbus, MO broke the $600 level with a low September median rent of only $582.

Last month we noted that two-bedroom units continued their steady climb, and while nationwide two-bedroom apartments are still up 5.42 percent for the year, September brings us an interesting drop from a median $1,360 to $1,342.

We are accustomed to seeing at least one double-digit increaser on our top ten list, but this September, Cleveland, OH was the winner with a very moderate 5.3 percent gain to $878.

Green Bay took second place (will that be the only second place Packer fans see this year?), with an even 5 percent rise to $834. Fort Worth, Texas showed us the only other meaningful gain with a 4.1 percent upward move to a median $1,261.

The next four cities on our top ten two-bedroom gainers list only report anemic increases of 1.9 to 2.4 percent. From third place to the seventh spot, these locales are Minneapolis, MN, St. Paul, MN, Athens, GA and Charleston, SC.

Of those, Minneapolis was the most expensive at $1,905 and Athens, GA was the most affordable at a median $1,014. Cincinnati, OH, Colorado Springs, OH, and Toledo, OH posted insignificant increases of only 1.1 to 1.6 percent. 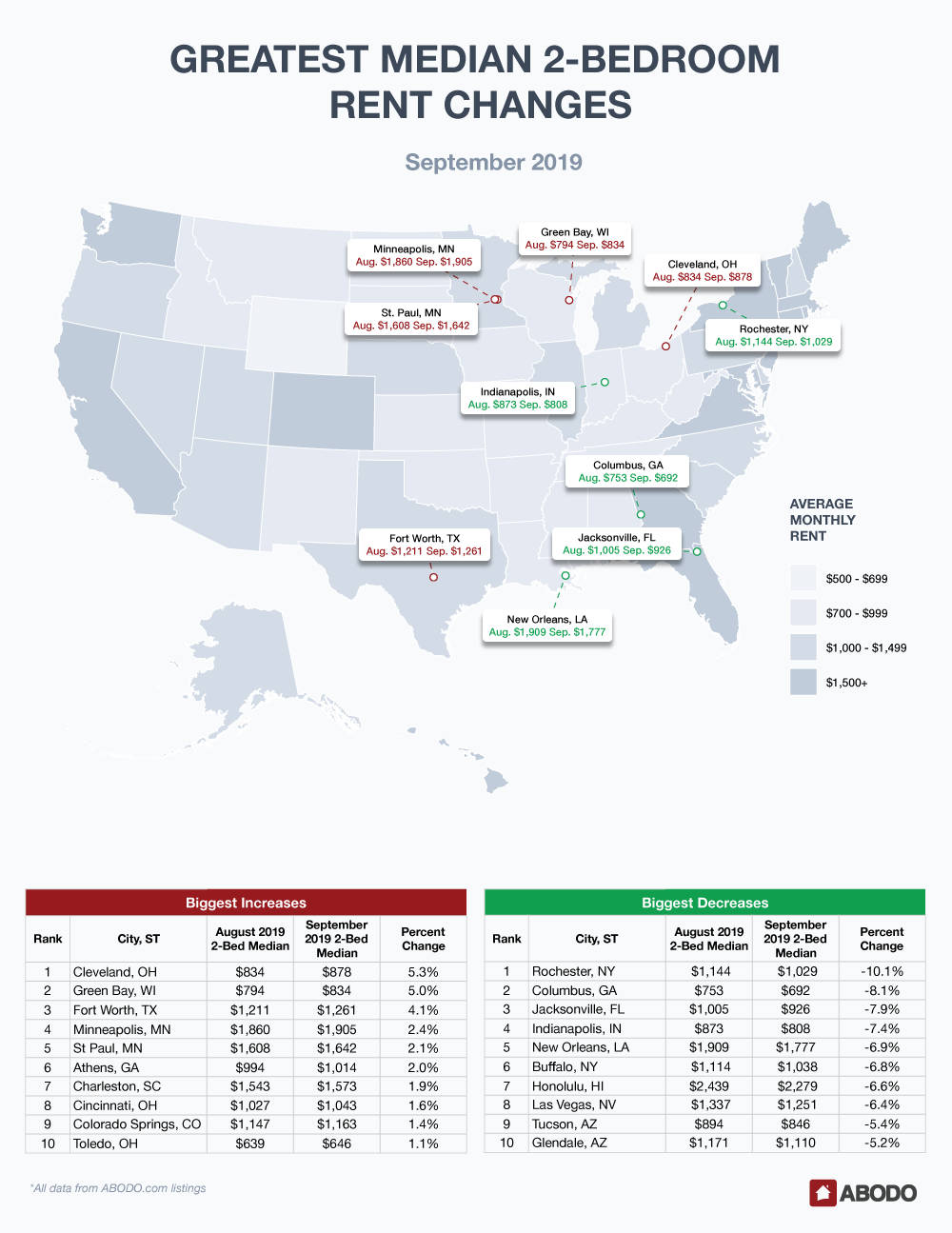 Losers were stout as Rochester, NY fell to a median $1,029, a solid 10.1 percent decrease. Columbus, GA followed with an 8.1 percent loss to a now even more affordable $692. Warm Jacksonville, FL dropped 7.9 percent, and Indianapolis, IN wasn’t far behind with a 7.4 percent decline. The Big Easy–New Orleans, LA, Buffalo, NY, Honolulu, HI and Las Vegas, NV were all tightly packed with losses ranging from 6.6 to 6.9 percent.

The bottom three, Las Vegas, NV, Tucson, AZ and Glendale, AZ fell 6.4, 5.4 and 5.2 percent respectively. Honolulu, HI was by far the most expensive place on our loser’s list to rent a two-bedroom unit with a median rent of $2,279.

Last month we saw no reason to conditionally think that a slow upward tick in both one- and two-bedroom median rents would not continue, and we cautiously predicted an unexciting national rental market. While we are not sounding the alarm, September data does show a marked downward trend.

We are seeing continued stock market weakness, low energy prices, low inflation, and general geopolitical chaos. Recent jobs-created numbers were just adjusted downward, the global economy is slowing, and pundits think the next recession is just around the corner.

None is these factors translate into a robust national rental market, and while we are not throwing in the towel yet, we’re cautious about the near-term.

Are declining rent prices actually predicting the next recession? Be sure to check with us next month.