Last month we reported that one and two-bedroom units showed a leveling-off trend, and in November we are seeing a moderate reversal as: 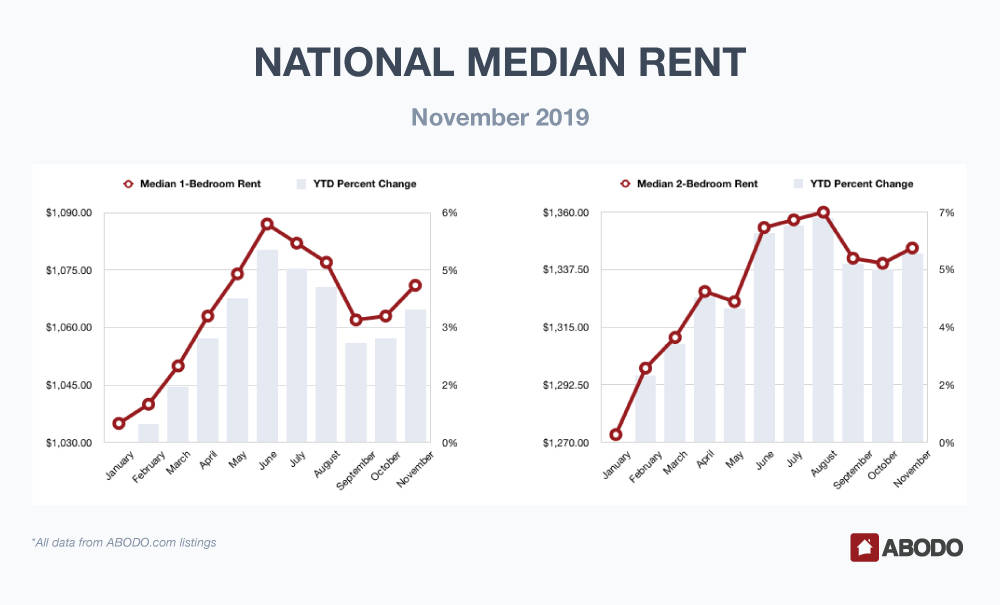 Motor City, Detroit, MI was our top ten winner with a serious 9.6 percent gain to a November median rent of $1145. Baltimore, MD and Oakland, CA followed with each gaining 7.3 percent. Alone in fourth place was warm Gainesville, FL with a 6.3 percent increase. Next, we see affordable Oklahoma City, OK with a 5.5 percent increase to a reasonable $805. Charleston, SC gained 5 percent.

While Colorado Springs, CO, Boulder, CO and Richardson, TX all rose by 4.5 to 4.6 percent. As you might guess, Boulder was the most expensive of these three with a median rent of $1873. In tenth place, we found Greensboro, NC with a tepid 3.9 percent increase to a still cheap $742. Oakland, CA won the prize for the priciest one-bedroom unit on our top ten list, and Greensboro was the least pricey. 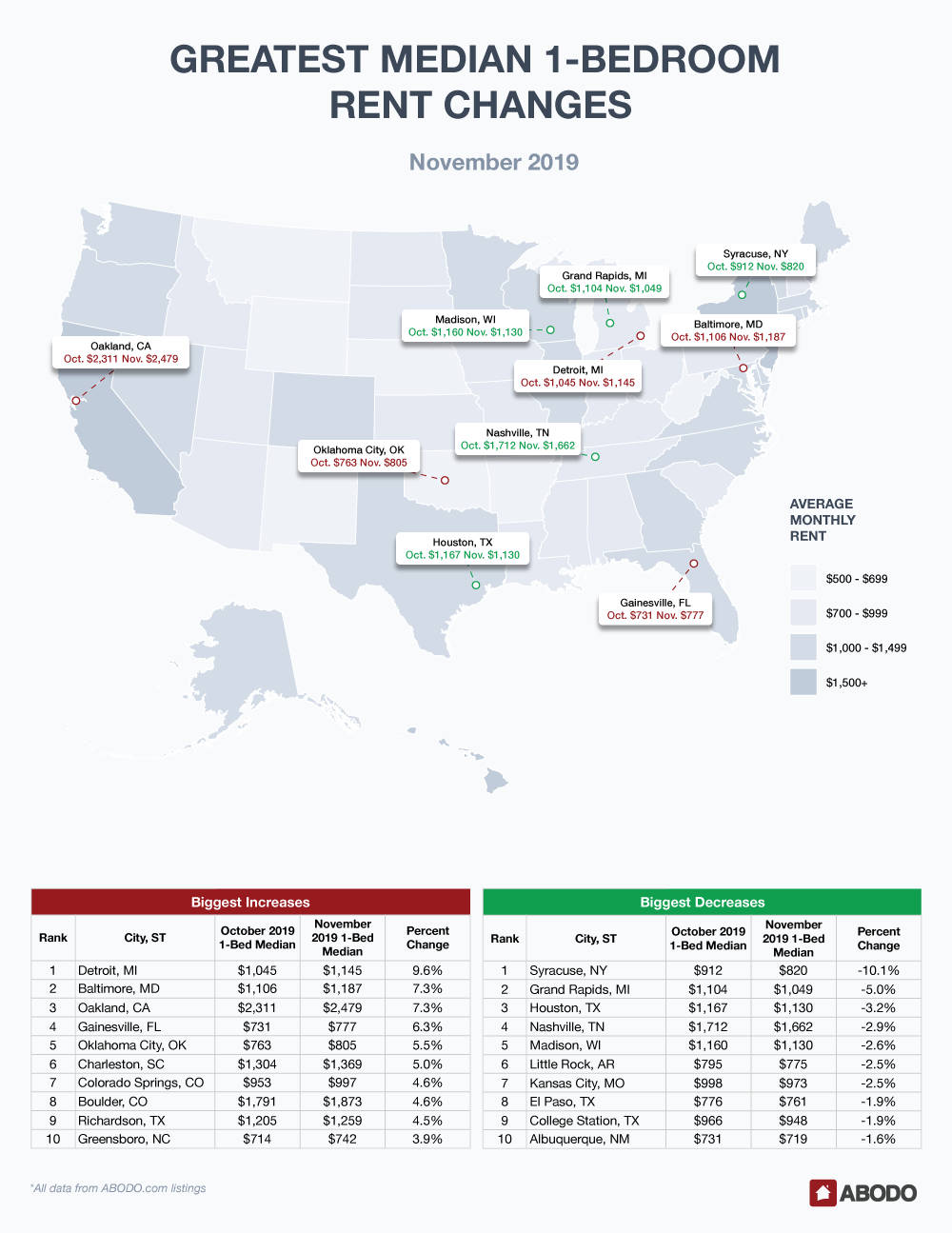 Winter came early to the North and Northeast, and Syracuse NY was even more of a bargain as it led our losers list with a big 10 percent decline to $820. Grand Rapids, MI came in second, but with only a 5 percent decline. Houston, TX—a city not frequently seen on any of our lists—fell 3.2 percent to $1130. Nashville, TN reported a 2.9 percent decrease while Madison, WI fell 2.6 percent with a median rent of $1130.

Little Rock, AK and Kansas City, MO clocked in with identical 2.5 percent decreases, as did El Paso, TX and College Station, TX with identical declines of 1.9 percent. Our number 10 loser was Albuquerque, NM, falling to a very affordable $719—a decrease of 1.6 percent. Albuquerque reported the cheapest rent on our top 10 downward mover list while Nashville, TN was the priciest at $1662.

Again, this month, double-digit increases or decreases were absent, and the downward movers showed a tighter range than the gainers.

Richardson, TX and Jacksonville, FL rose 5.4 and 5.3 percent respectively, and Cincinnati, OH reported an even 5 percent increase to $1139. Cleveland, OH and Knoxville, TN both rose 4.7 to 4.8 percent, and Indianapolis, IN and Toledo Ohio gained between 3.3 and 3.5 percent. The most expensive two-bedroom units on our top ten gainer list were in Oakland, CA, and the easiest rent check to write was in Toledo, OH—a comparatively paltry $684. 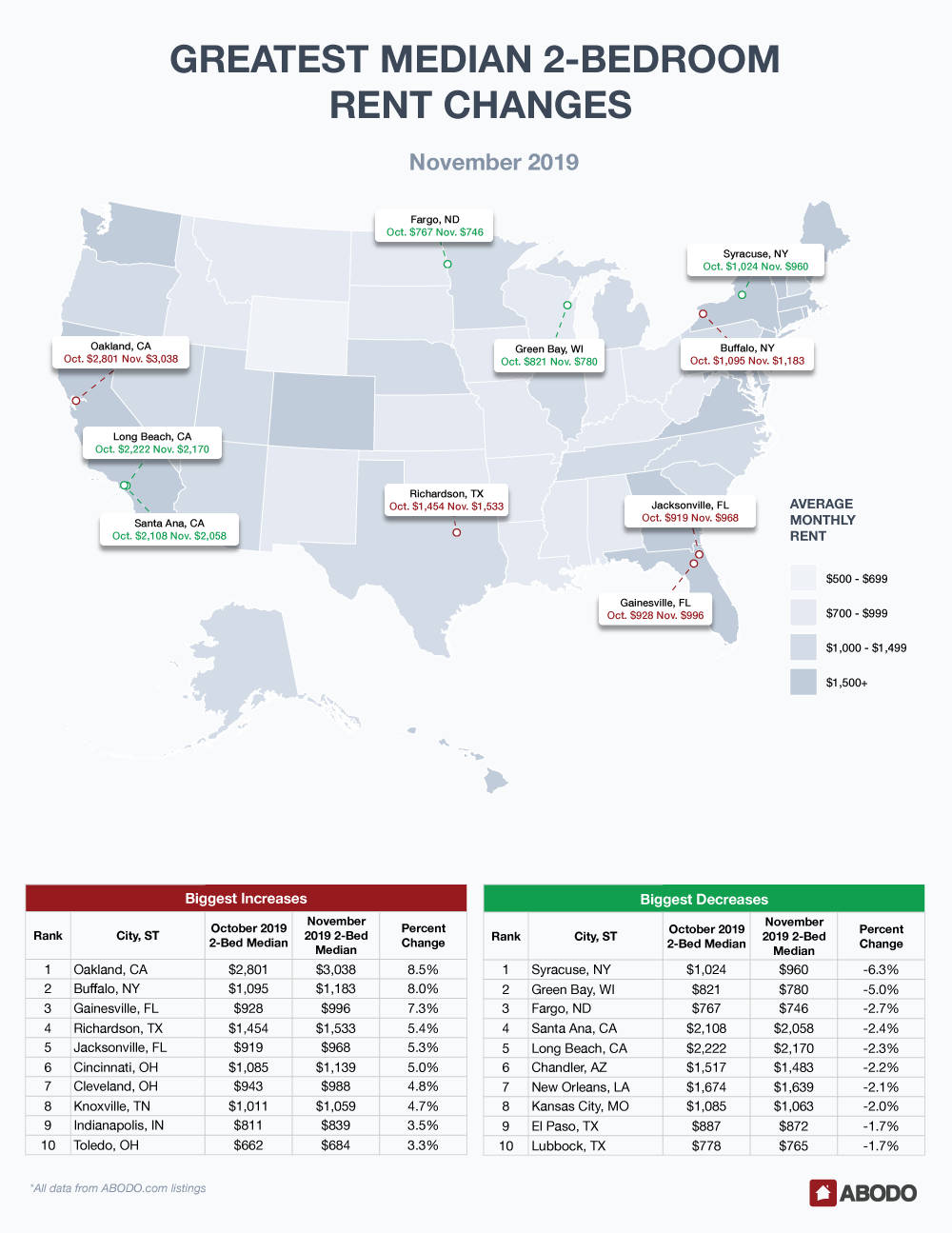 Something was apparently going on in Syracuse because that city also topped our two-bedroom loser list with a fall of 6.3 percent. The Packers ended the halfway point 7 and 1 but two-bedroom Green Bay rents fell 5 percent to $780.

Finally, at the bottom of our list, both El Paso, TX at $872 and Lubbock, TX at $765 reported the same 1.7 percent decrease. Fittingly, Fargo, ND was the most economical at $767 while Long Beach, CA was the most expensive two-bedroom on our losers’ list with a not-that-earthshaking median rent of $2058.

In October we said that “the generally flat and unexciting national median rents will continue,” and so far, we are right. Like the stock market that doesn’t seem to want to go down, both one and two-bedroom national median rents refused to give in and have climbed back to mid-year levels. While still under yearly highs, both one- and two-bedroom units are still firmly in positive territory.

Before national elections, political administrations typically do everything possible to avoid economic recessions, and this time period is no different. With the likelihood of continued Fed-driven interest rate reductions and with cheap oil—and therefore cheap gas—still the norm, consumers may be in a great mood for the holiday buying season, and as we move into winter, we just don’t see a seismic downward rental price shift.