2018 has seen rent prices meander as July showed the beginning of a trend toward higher prices, but October brought a halt to that. Our November report shows that one-bedroom units were basically flat with a statistically insignificant .08 percent fall — a median rent decrease of only one dollar from October to November. 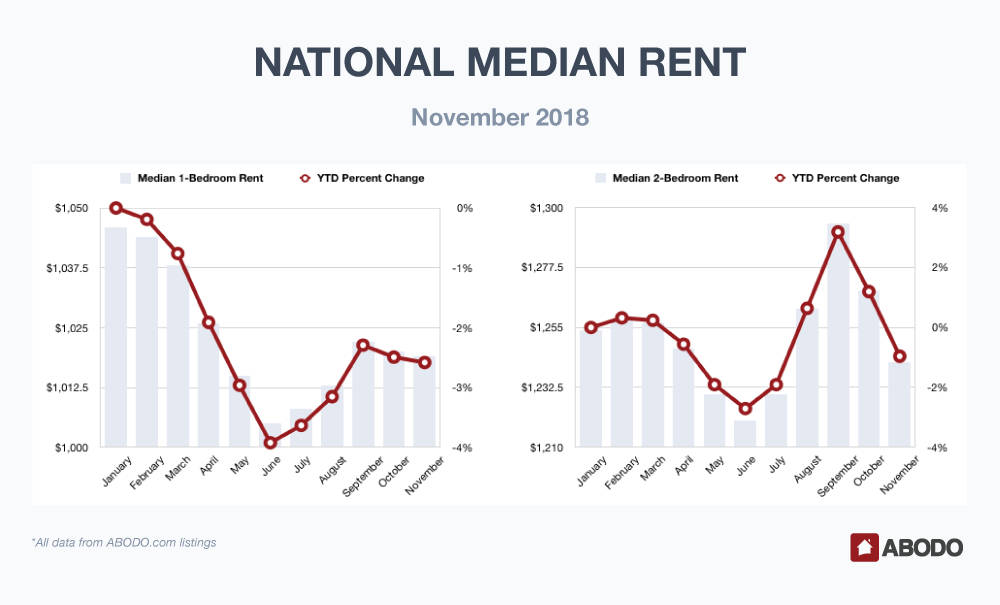 Two-bedroom units posted a similar unexciting decline of .24 percent, so we are calling November data stable.

While October’s top increaser was up by double digits, we see no such activity this month. Boulder, CO took the number one spot with a 7.9 percent increase from $1,641 to $1,771. Music City, a/k/a Nashville, TN and Las Vegas, NV rose 5.9 and 5.8 percent respectively.

Pittsburg, PA was alone with a 4.4 percent increase, While Chicago, IL, and Winston-Salem NC were both close to the 3.4 percent mark.

Grand Rapids, MI, Orlando, FL, Tempe, AZ, St. Louis, MO, and Baltimore, MD all were bunched together as they lost from 4.2 percent to 4.8 percent in November.

Of the top 10 losers, Rochester, NY was the cheapest place to live with a very affordable $634 median rent. Surprisingly, Baltimore, MD was the most expensive on the decliner list with a median rent of $1,241.

Scottsdale, AZ two-bedroom units rose a solid 6.2 percent as the Arizona city easily led the top 10 increasers with a median rent of $2676. Chicago, IL did better than the Cubs with a 6 percent increase, and Nashville, TN posted a 5.2 percent increase, similar to the city’s one-bedroom rise.

Bunched in the 3.5 to 3.0 percent range were Louisville, KY, Boulder, CO, Athens, GA and Tallahassee, FL.

Athens, GA proved to be the most economical two-bedroom median unit price on the top 10 increaser list at an affordable $836. 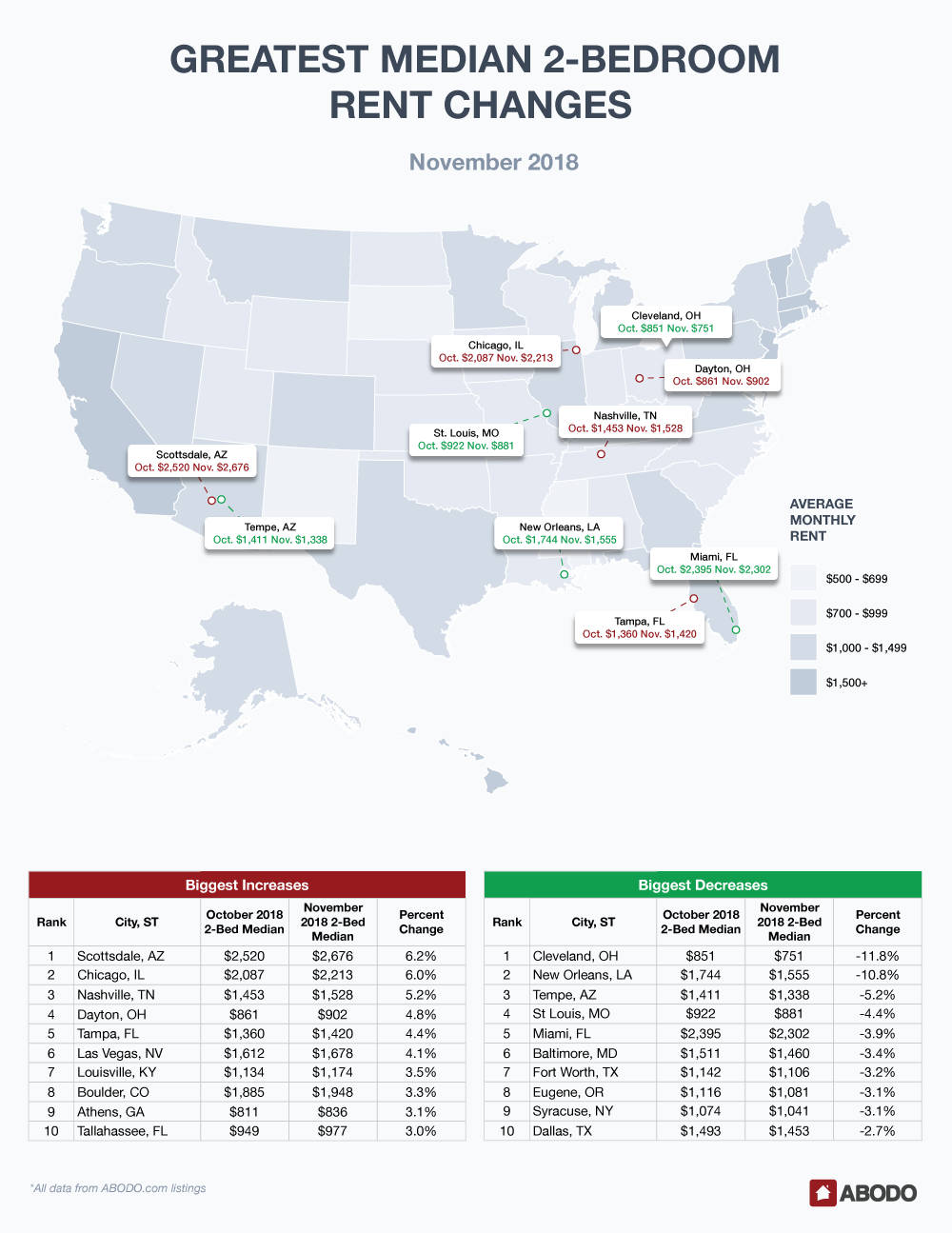 New Orleans, LA, was not far behind with a 10.8 percent decline, but the losses were less pronounced in the number three spot as Tempe, AZ declined a more modest 5.2 percent.

St. Louis, MO was alone in the number four ranking with a 4.4 percent decline, and warm-weather paradise Miami, FL was not that far behind with a reported 3.9 percent decline from a noteworthy $2,395 to $2,302 for a two-bedroom unit. Four municipalities reported similar decreases of 3.1 to 3.4 percent, and these were Baltimore, MD, Fort Worth, TX, Eugene, OR and Syracuse, NY.

Taking a cue from the Cowboys, Dallas, TX finished the top ten losers with a decrease of 2.7 percent to $1,453.

November Recap: What This Means

As we had mentioned last month, we thought that rents, though they might fall, would not drop dramatically in November and this has verified. While a few cities showed significant swings, November was basically flat, and we see that trend continuing into December.

We are concerned that higher interest rates may negatively affect home sales and therefore strengthen the rental market. On the other hand, we have begun to see stock market volatility, and historically a stock market decline predicts a future recession. With competing factors at work, however, we still feel that December will not show broad national average median rent changes.

Be sure to check with us next month.