Have 2018 rent price decreases found the bottom? Has the six-month downward trend finally been stopped?

While one month’s stats don’t define a new rent pricing era, the national median prices of both one-bedroom and two-bedroom units showed modest July increases. Though one-bedroom apartments are still down a substantial 3.63 percent for 2018 thus far, the median July price nudged upward to $1,008, from the previous month’s $1005. 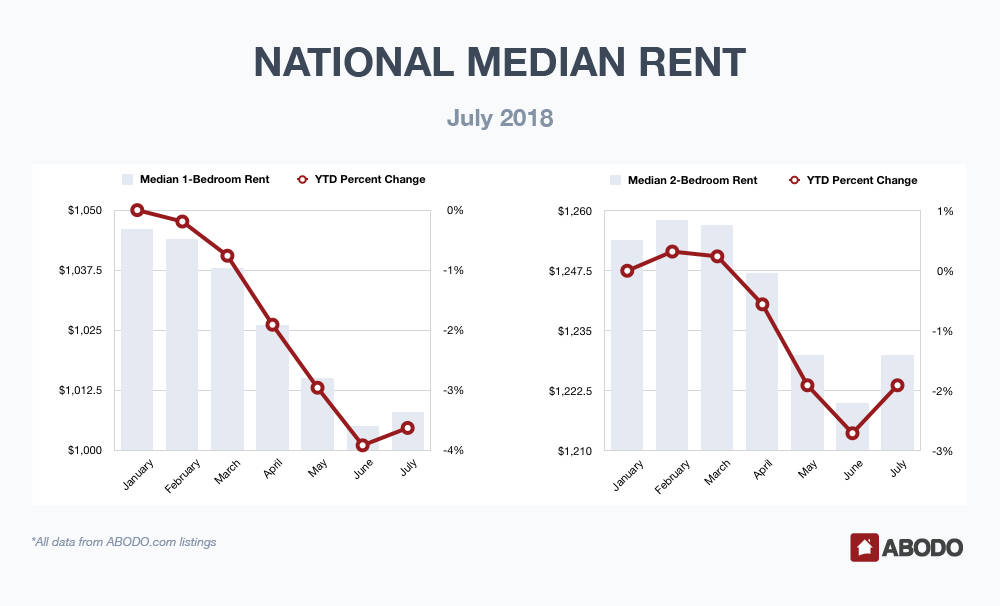 This month 10 cities posted increases of 4.5 percent to 6.4 percent. Baltimore, MD And Orlando, FL led the pack with over 6 percent rises and Columbus, OH and Lexington, KY, two municipalities that rounded out the top ten, both had substantial increases of over 4.5 percent.

This is a significant difference from June where the small number of cities with increases in rent price were considered outliers. 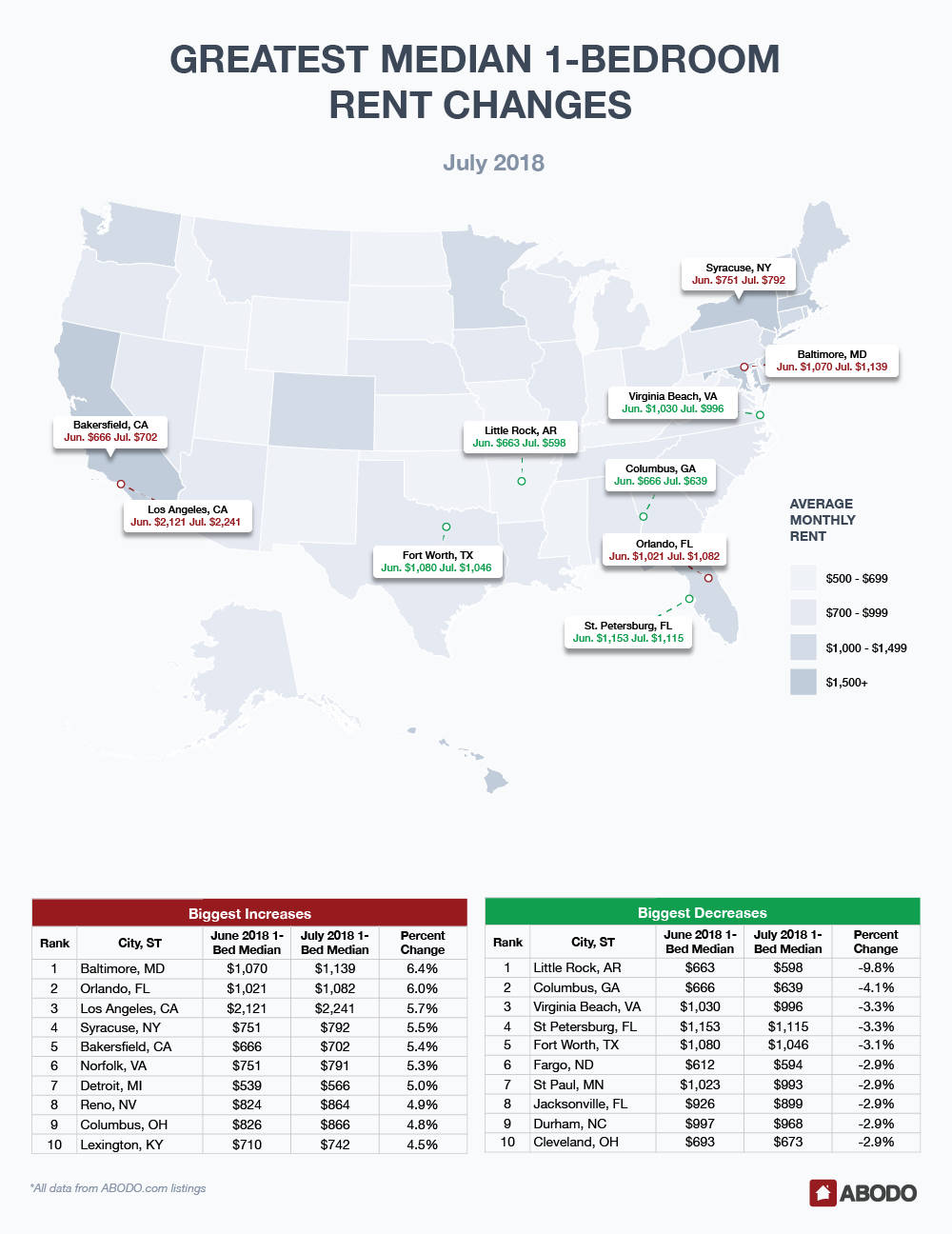 Cities with rent prices on the decline posted a more severe range with Little Rock, AR reporting a huge 9.8 percent decline from June.

The next largest decline in 1-bedroom rent price was seen in Columbus, GA, though that city’s decline was less than half of Little Rock’s at 4.1 percent.

Following the slight upward national trend, the top ten 2-bedroom increasers rose an average of 4.63 percent with Syracuse, NY at the top with a 6.8 percent increase, and Scottsdale, AZ at the bottom posting a more modest but still significant 3.0 percent rise.

Detroit, MI logged a hefty 6.1 percent price increase and even low-priced Green Bay, WI — where a mere $700 could secure a 2-bedroom apartment in June — showed drastic 3.1 percent increase to $722 this July. 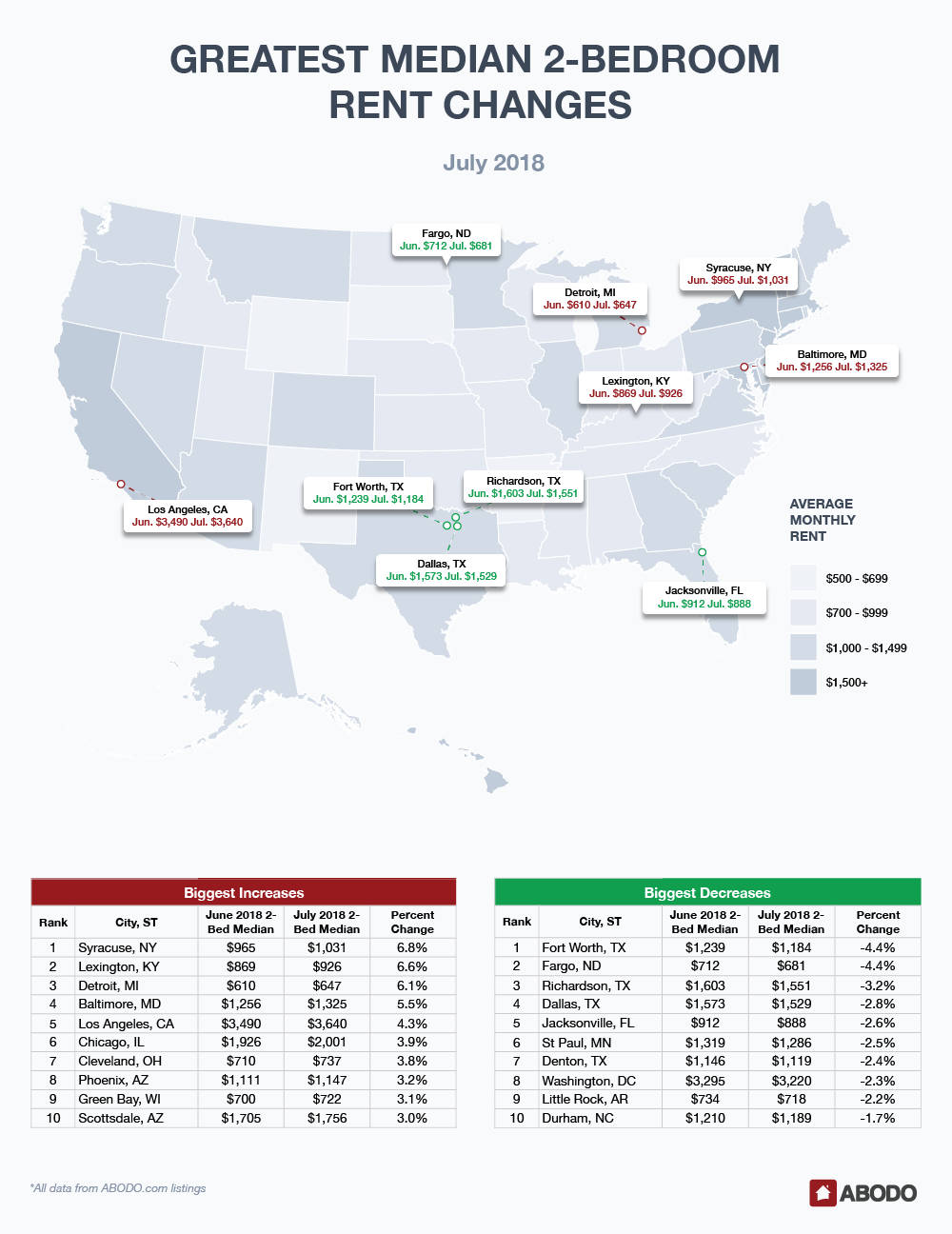 Even cities with prices on the decline showed some stability and tightening as the 10 biggest decreasing cities ranged from both Fort Worth, TX and Fargo, ND with eye-opening 4.4 percent losses, to Durham, NC that clocked in with a 1.7 percent fall from $1,210 in June to $1,189 in July.

The rest of the decliners were tightly grouped, falling 2.2 to 3.2 percent.

Rent Report Recap: Where We Stand

June capped a 6-month slide that looked like it might continue into July. This didn’t exactly happen as both national 1-bedroom and 2-bedroom unit averages stopped the decline and nudged upward.

While there are pockets of both strength and weakness, if inflationary pressures persist and the economy stays afloat, landlords may breathe a sigh of relief, and tenants may start to worry.

It’s clear that August rent figures will be very interesting.