Last month it was noted that 2017 saw substantial one-bedroom apartment rent increases, but 2018 has been quite different with the year’s declines showing few signs of abatement. The median price of one-bedroom units continued to fall in 2018 by a significant 3.9 percent year-to-date with January’s median national rent of $1,046 dropping to $1,005. 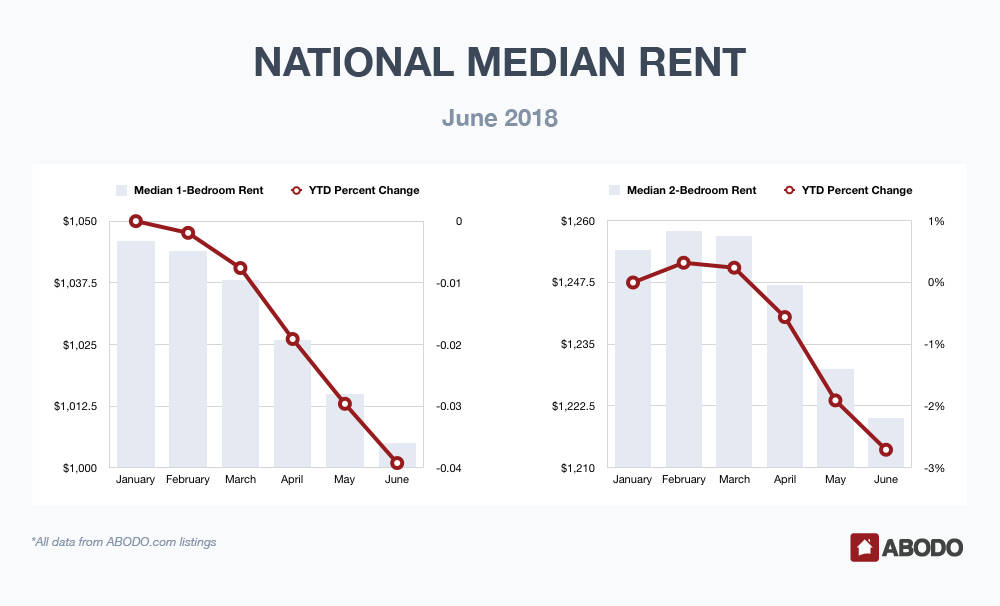 Also strong in 2017, two-bedroom apartments fell again in June 2018, with a year-to-date decrease of 2.7 percent, continuing the slide that began in January 2018.

St. Paul, MN led the pack on the rent declines with a 8.6 percent decrease followed by Fargo, ND as rents decreased there by a substantial 6.8 percent. Other cities with decreases were Minneapolis, MN falling by 5.2 percent and Orlando, FL which experienced a 4.5 percent drop.

There are some local outliers, however. New York City and Norfolk, VA one-bedroom apartments both increased by 5.5 percent followed by New Haven, CT where rents increased by 4.8 percent. Tempe, AZ prices showed an also large 3.5 percent uptick. Detroit, MI was another city with rents on the rise posting a 2.7 percent increase. 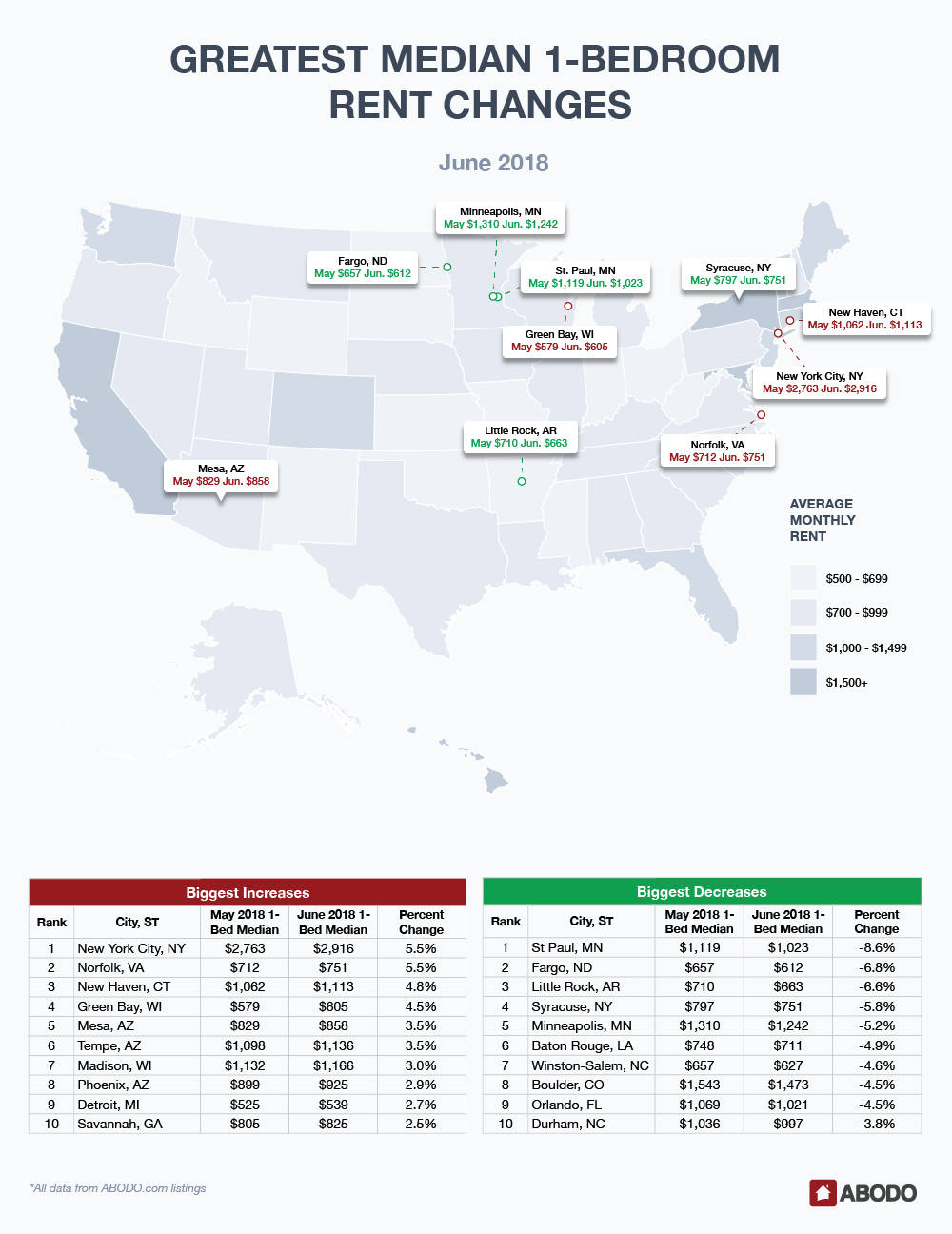 Massachusetts showed stability with both Boston and Cambridge showing no price movement in either direction, and San Francisco had an insignificant 0.1 percent drop.

In Texas, Dallas was down only 0.3 percent, and Houston did even better with only a tiny 0.1 percent fall. Perennial favorite Austin was dead even.

Nationally, two-bedroom units posted their biggest month of decreases of the year with the aforementioned 2.71 percent drop. The unit that cost $1,254 in January now can be had for $1,220.

Buffalo, NY and St. Paul, MN led the decliners with respective decreases of 8.2 and 5.7 percent.

Honolulu, HI may have had a reverse volcano effect as two-bedroom rents contracted by 1.6 percent. 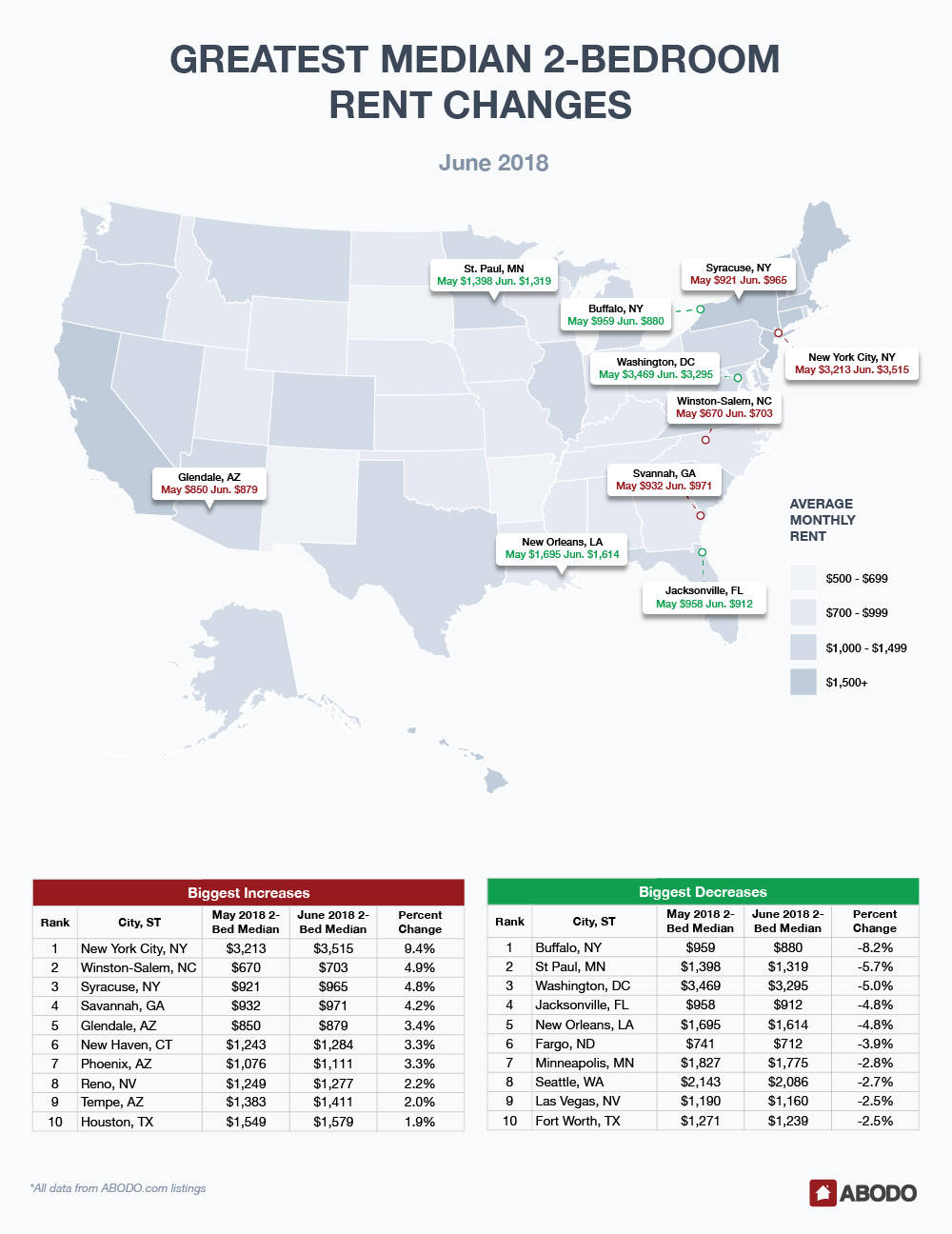 Consistent with its one-bedroom declines, Minneapolis, MN reported a 2.9 percent two-bedroom rent decrease while another noteworthy loser was St. Petersburg, FL logging in at minus 2.2 percent.

Again, while weakness abounds, the decreases are mostly below 3 percent with, of course, the exceptions noted above.

With rising mortgage interest rates, it is possible that rentals will gain in preferability, and next month’s report should let us know if we will begin to see a trend reversal. For now, however, renters are still the winners in most areas.