National Rent Trends For the First Six Months of 2017

Each month, Rentable releases reports aimed at taking the pulse of the American rental market: cities experiencing the greatest increase (and decrease) in rent, cities with the highest rent, and how individual markets compare to the national average. Although those reports measure month-over-month and year-to-date changes, we also think it’s valuable to zoom out and take stock of longer-term trends.

That’s why, back in January, we released our first Annual Report, which examined 12 months of data. And that’s why this month we’re releasing our first Midyear Report, which will look back at the first half of 2017 (as well as the month of July).

How did rent prices change nationally? At the state level? Where did rent increase the most over the past six months, and where did it decline? Where are the 10 most expensive rental markets? Read on to find out. 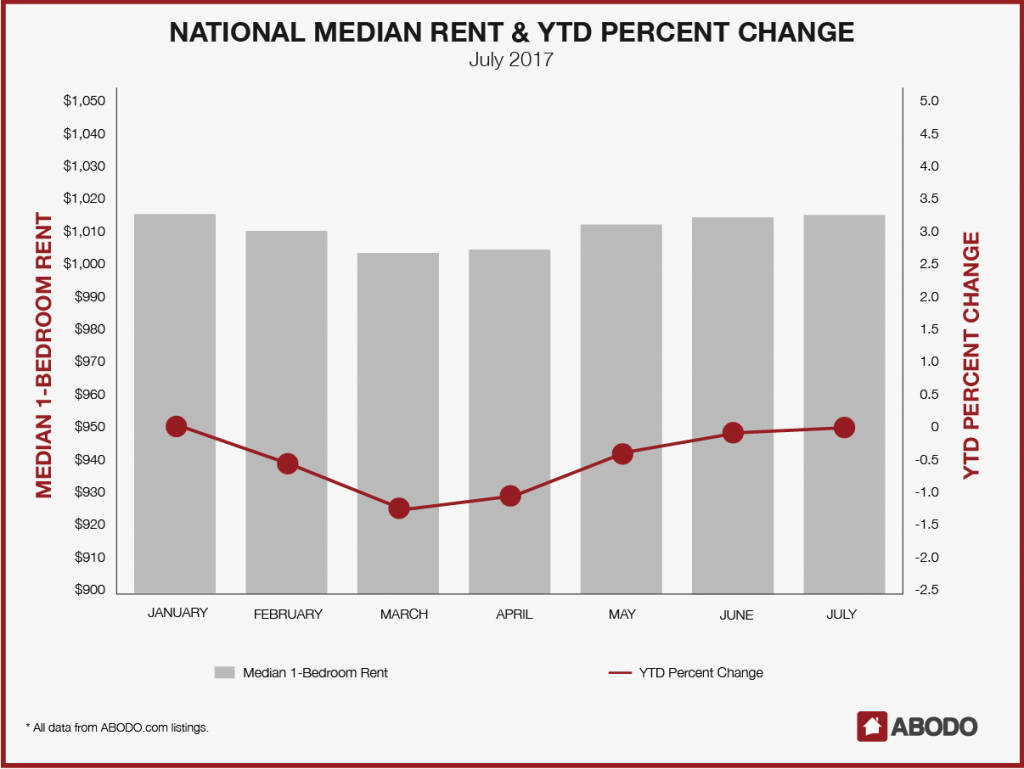 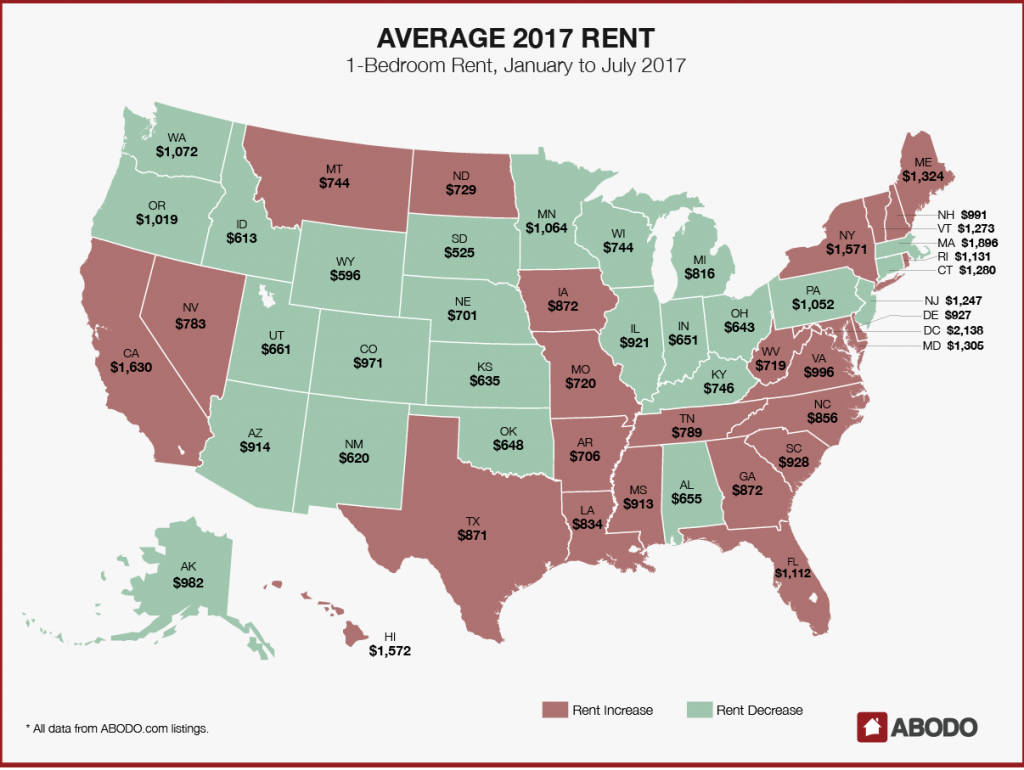 The majority of states, 31, saw average changes in rent price of 1.3% or lower.

JANUARY to JULY CHANGE BY CITY 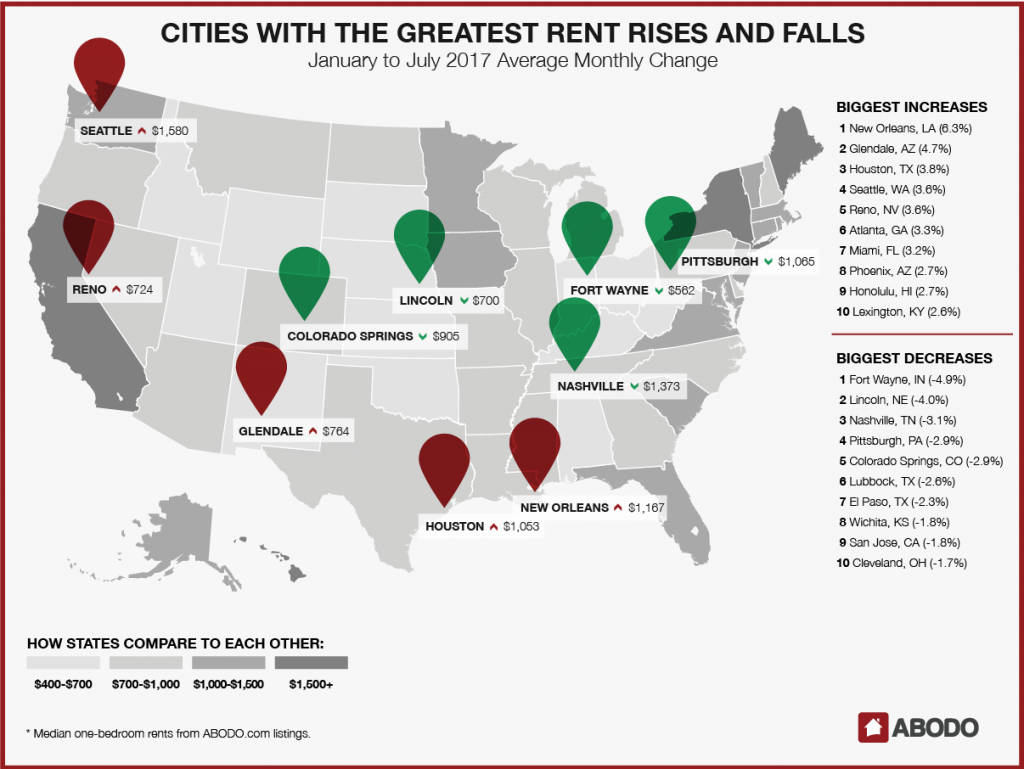 In December, our annual rent report noted that many of the cities with the fastest-growing rents were between the coasts. That trend continued in the first half of 2017: Eight of the top 10 cities for rental hikes were in the South or Southwest. New Orleans, LA, led the way, with an average monthly change of 6.3% and an average rent of $1,167. Glendale, AZ (4.7%, $764), and Houston, TX (3.8%; $1,053), followed closely behind, with Reno, NV; Atlanta, GA; Miami, FL; Phoenix, AZ; and Lexington, KY, also making appearances.

The only geographic outliers were Seattle, WA, which saw rents rise an average of 3.6% over the first half of the year, and Honolulu, HI (2.6%). 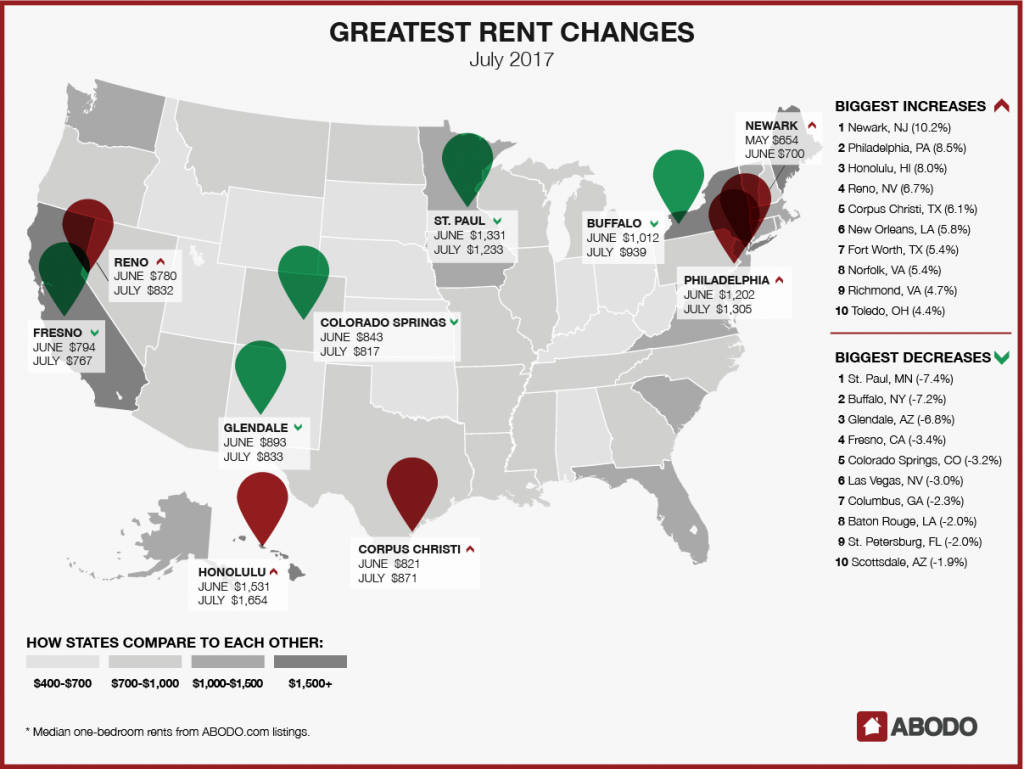 For the second month in a row, Buffalo, NY, and St. Paul, MN, experienced the largest drops in rent in the country. This month, the order was reversed: St. Paul, MN, leads the way, with a 7.4% decrease to $1,233. Buffalo, NY, saw its rent drop 7.2% to $939. Glendale, AZ, which over the first six months of 2017 had the second-highest average monthly increase in rent, saw its median one-bedroom decrease 6.8% over the month of June, bottoming out at $833. 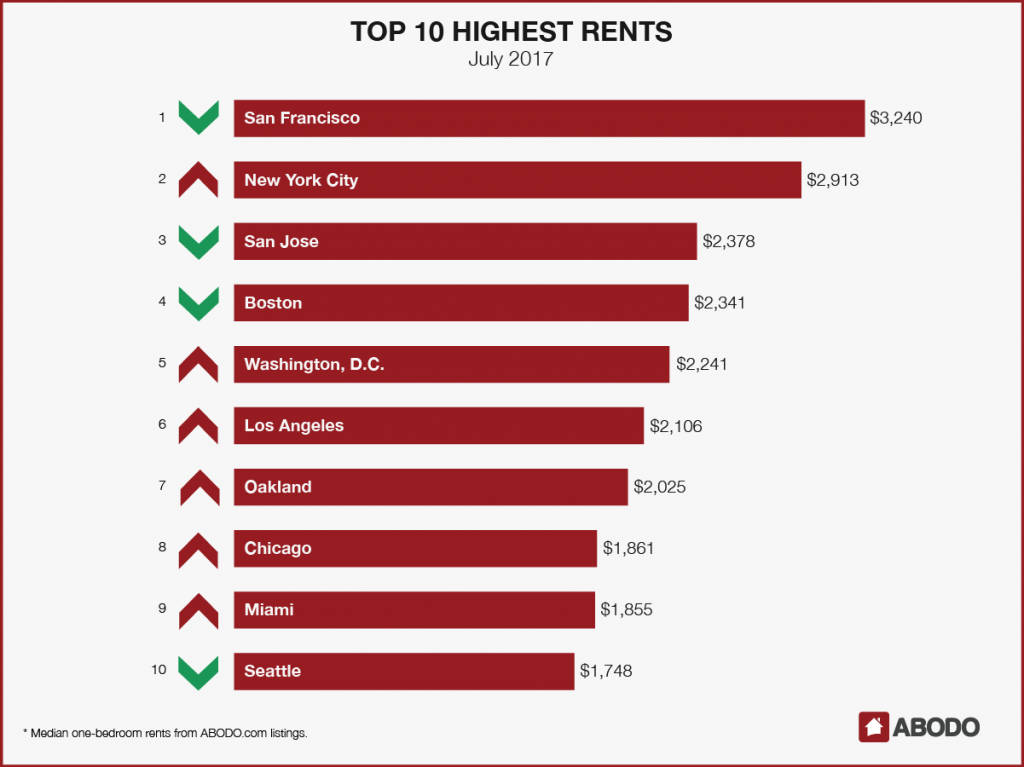 The cities with the highest rents are largely unchanged since last month’s report. San Francisco rents dropped $40 to $3,240, but that wasn’t enough to bump the city from its spot atop the rankings. As usual, New York City ($2,913) and San Jose ($2,378) rounded out the top three. The only real movement in the list of the country’s highest rents was near the bottom: Chicago ($1,861) superseded Miami ($1,855) for eighth place.

Nationally, rental prices were relatively stable through the first six months of 2017. Rent is rising in just over half of the nation’s states, and certain cities are seeing sustained increases in rent month to month. Cities where rent was already high — New York, D.C., Los Angeles — are still high, but the most notable rental increases are in growing markets in the South and Southwest, a continuation of a trend we noticed in our 2016 Annual Report. In the next six months, rental prices in those markets will be a good barometer for how well new development is keeping up with what appears to be continued — and rising — demand for rentals.

Each month, using over 1 million Rentable listings across the United States, we calculate the median 1-bedroom rent price by city, state, and nation and track the month-over-month percent change. For this report, we analyzed data for the first six months of 2017 and found the average of the monthly percent changes in list price separately for each state and city. We also calculated the 2017 average list price in each state by taking the average of all monthly median list prices.