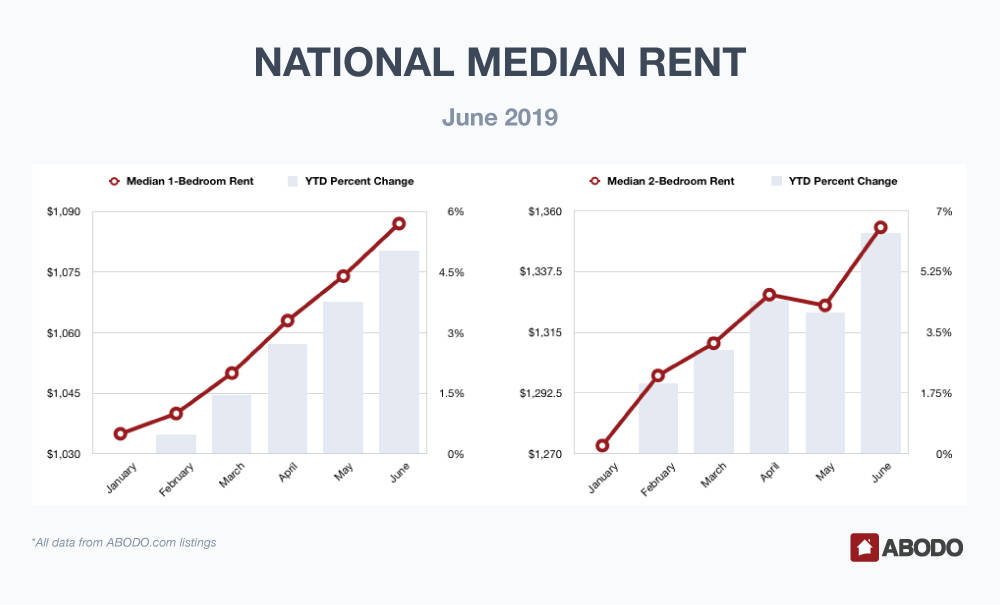 One-bedroom apartments have increased a full 5.02 percent since January, and the median national one-bedroom rent now stands at $1,087, a one and one-quarter percent increase from May.

Cleveland, OH rocked our world and vaulted to the number one spot on our monthly median gainers list moving from a very affordable $692 to a still comfortable but sharply higher $760—an increase of 9.8 percent. Hot and cheap Tucson, AZ moved up 8.9 percent to $651, and Salt Lake City, UT gained 8.3 percent to sit at $1,108. Norfolk, VA was alone in fourth place at $948—an 8 percent increase.

Columbia, SC held the fifth position rising 7.7 percent to $773, and Athens, GA, Columbia, MO, Seattle, WA and Mesa, AZ all increased between 7.0 and 7.3 percent with Seattle the priciest at $1,836. Buck Owen’s home, Bakersfield, CA posted an even $700 median June rent price, up 6.5 percent from May, and that’s it for the top ten gainers. 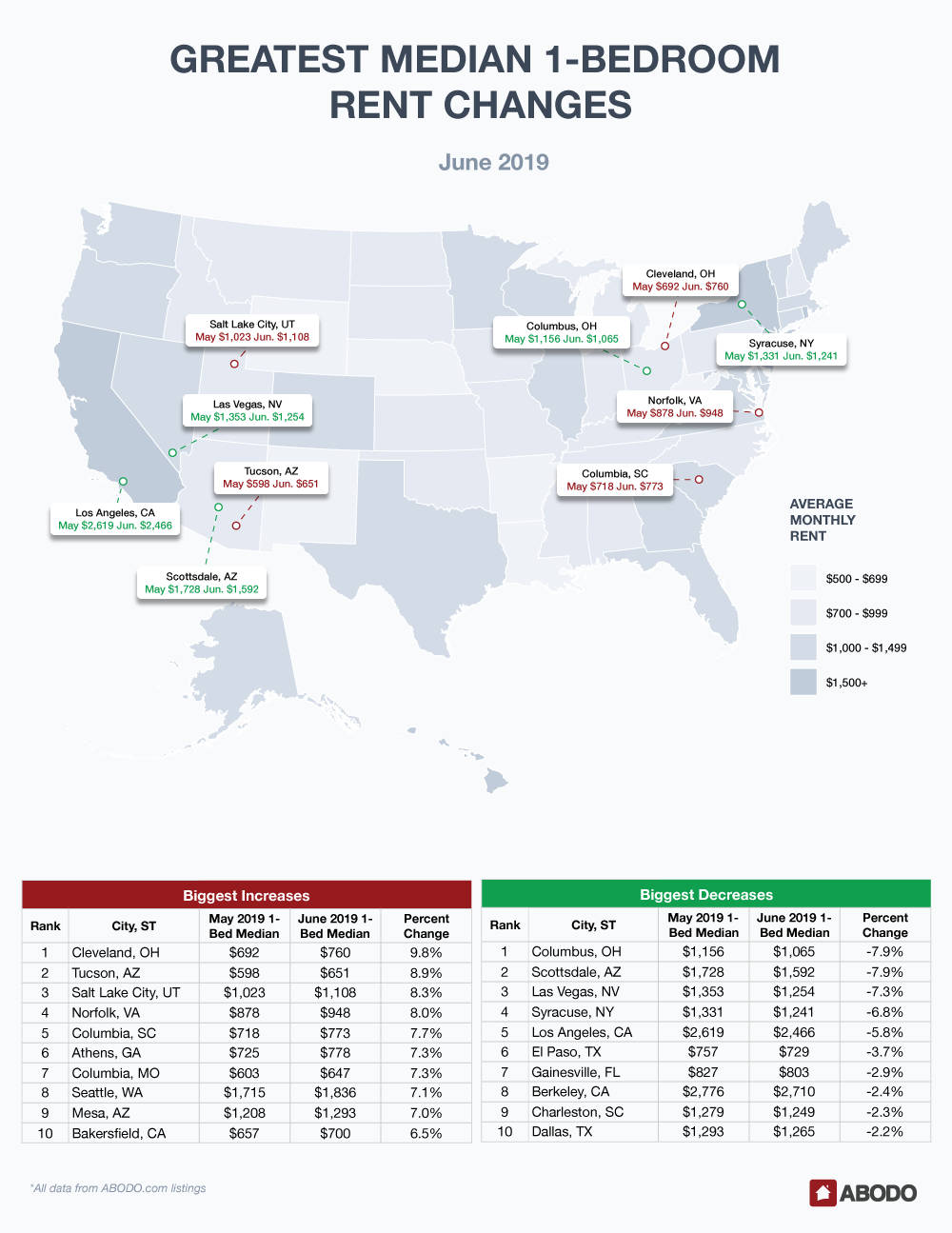 As we sometimes see in a hotter market, the losers posted smaller percentage decreases than the gainers as Columbus, OH led the losers with a still significant 7.9 percent loss to $1,065. Scottsdale, AZ equaled that loss as it fell from $1,728 to $1,592. Las Vegas showed some volatility as it fell to $1254 from May’s $1,353—a 7.3 percent decline. Syracuse NY and Los Angeles, CA fell 6.8 and 5.8 percent respectively, and very affordable El Paso, TX lost 3.7 percent to settle at $729.

The bottom four of our top 10 decliners list all lost from 2.2 to 2.9 percent. Dallas, TX claimed the 10th spot with Gainesville, FL, Berkeley, CA and Charleston, SC in seventh, eighth and ninth place.

The most expensive city on the top ten one-bedroom losers list was Los Angeles, CA with a June median one-bedroom rent at a whopping $2,466.

The cheapest place to live on our top ten two-bedroom gainers list was Cleveland, OH, and the priciest was of course Seattle, WA. 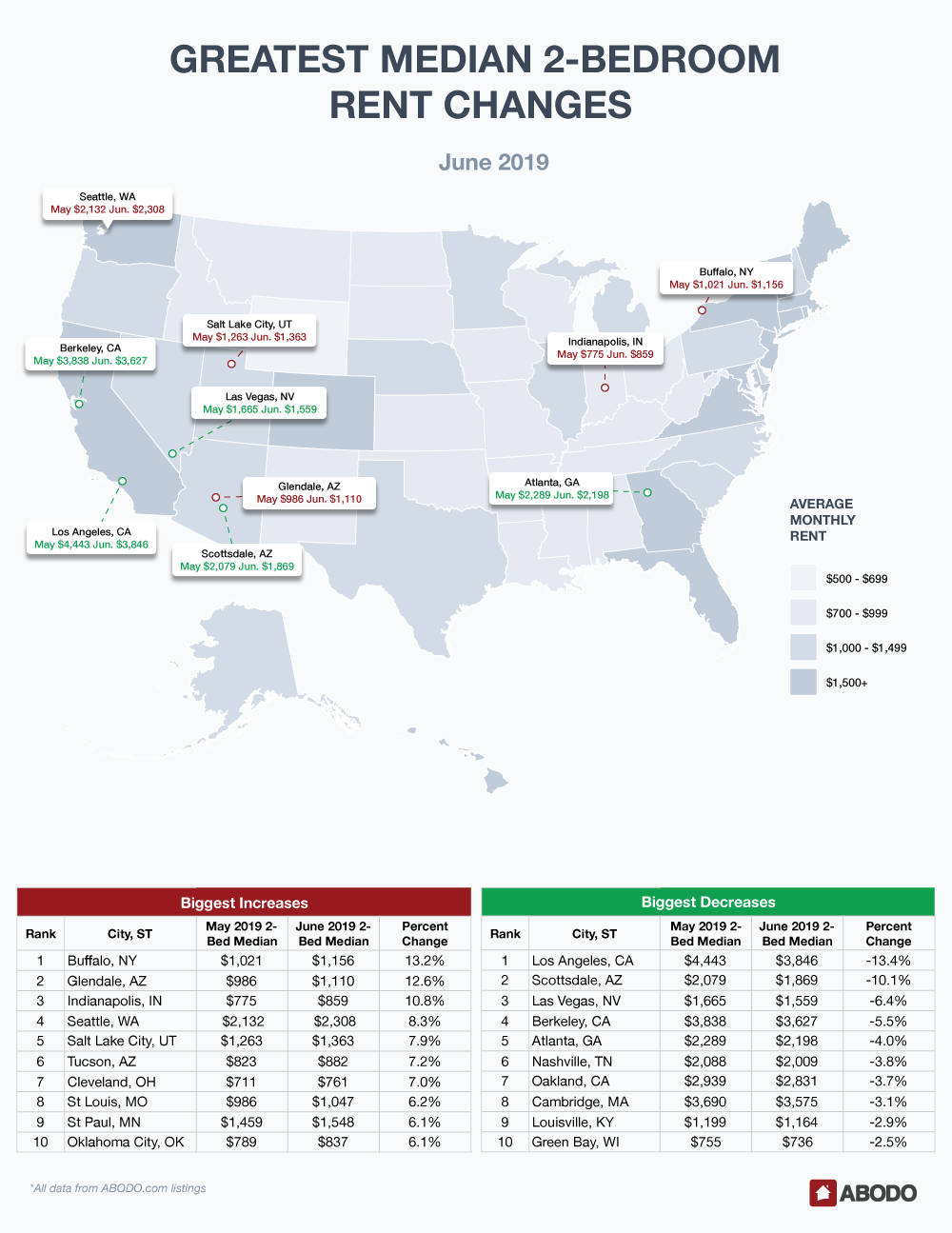 Like its one-bedroom cousin, Los Angeles fell, and led the two-bedroom losers with an eye-opening 13.4 percent decrease. Scottsdale, AZ followed with a hefty 10.1 percent fall from $2,079 to $1,869. Beginning with third place the losers began to report less formidable decreases as Las Vegas, NV lost 6.4 percent, followed by Berkeley, CA with a 5.5 percent loss to a just unreachable-for-some $3,627 monthly median rent. Atlanta, GA held above the $2,100 mark but still fell 4.0 percent.

Nashville, TN, Oakland, CA and Cambridge MA all lost between 3.1 and 3.8 percent. At the bottom of the losers list we found Louisville, KY at $1,164 falling 2.9 percent, and Green Bay, WI almost out of the playoffs with a median two-bedroom rent of only $736.

Los Angeles, CA was the most expensive place to live in two-bedroom land and Green Bay was the most affordable.

We are concerned about stock market developments like the feared inverted yield curve that surfaced on May 29th and we witnessed a weakness in oil prices that while it has steadied, is still worrisome.

Add that to geopolitical tensions like the Iran situation, mix that with domestic issues like Robert Mueller’s take on his Russian interference report and we look to July with some trepidation. On the other hand, we are almost in an election year and most pundits just don’t see a recession occurring until after that election.

Frankly, the solid increases we saw in June were on the higher side of your expectations, and although the upward trend may quickly soften if we see a severe economic downturn, that just does not look likely quite yet. Be sure to check with us next month.