Our predicted modest upward one-bedroom trend is verifying while we see a slight pullback in the previously red hot two-bedroom market. Let’s check out the details and trends for rent prices nationwide.

One-bedroom units have moved from a January median $1,035 to $1,074 in May, and that’s a yearly increase of 3.77 percent. From April to May, one-bedroom rents rose 1.06 percent, and following are details:

Columbia, SC holds the May number one gainer spot with a stellar 10 percent median rent increase from $653 to a still very reasonable $718. Two California cities, Bakersfield and Fresno posted increases of between 8.1 and 8.4 percent with Fresno much more expensive at $1,144. 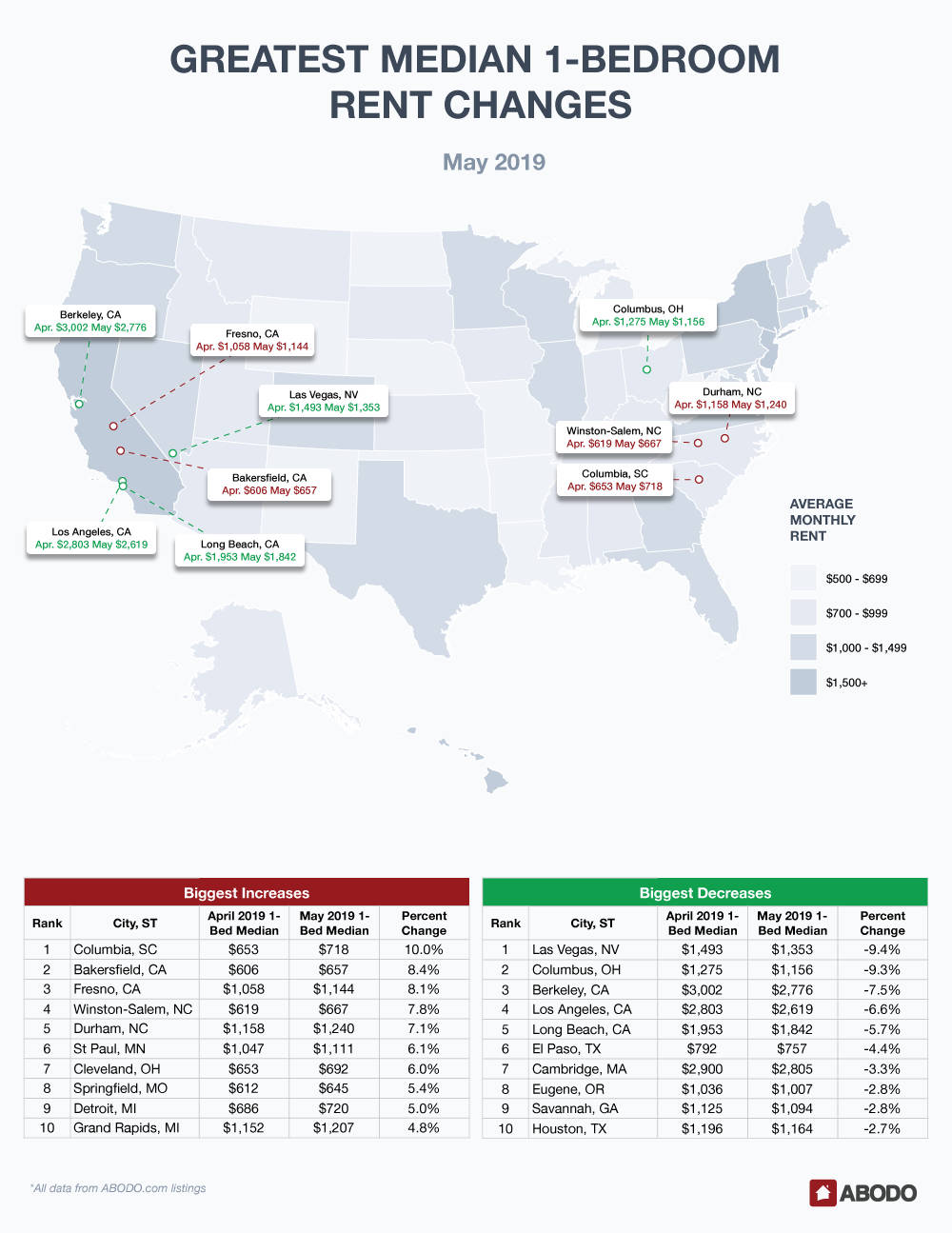 Unlike some previous months where we saw big movement discrepancies between gainers and losers, May’s one-bedroom decliners posted declines similar to the gainers. Las Vegas, NV fell the most from $1,493 to $1,353, a loss of 9.4 percent. Columbus, OH was not far behind declining 9.3 percent, and stratospheric Berkeley, CA dropped 7.5 percent to $2,776. Two more California cities followed with Los Angeles and Long Beach both showing declines of between 5.7 and 6.6 percent.

Reasonable El Paso became even more affordable as it held down decliner spot number six with a 4.4 percent decline to $757. Cambridge, MA was alone in seventh place with a 3.3 percent fall, and rounding out the top ten losers were Eugene, OR, Savannah, GA and trendy Houston, TX all falling close to 2.8 percent.

El Paso was by far the most inexpensive place to live on the top ten losers list.

Two-bedroom unit median national rents decreased slightly from $1,239 in April to $1,325 in May, but still showed a yearly increase of 4.08 percent.

Two-bedroom gaining units showed equal volatility in May as St. Paul, MN increased a full 9 percent to settle at $1,459. Arid Glendale, AZ rose 8.4 percent to pleasantly affordable $986, and cold Buffalo, NY along with Fresno, CA rose from 7.2 to 7.4 percent.

All of the rest of the top ten gainers were tightly bunched with increases from 4.5 percent to 4.9 percent.

Miami, FL was the most expensive of the bottom six gainers at $2178, and Winston-Salem, NC was the most affordable at $768 even with a 4.5 percent gain. 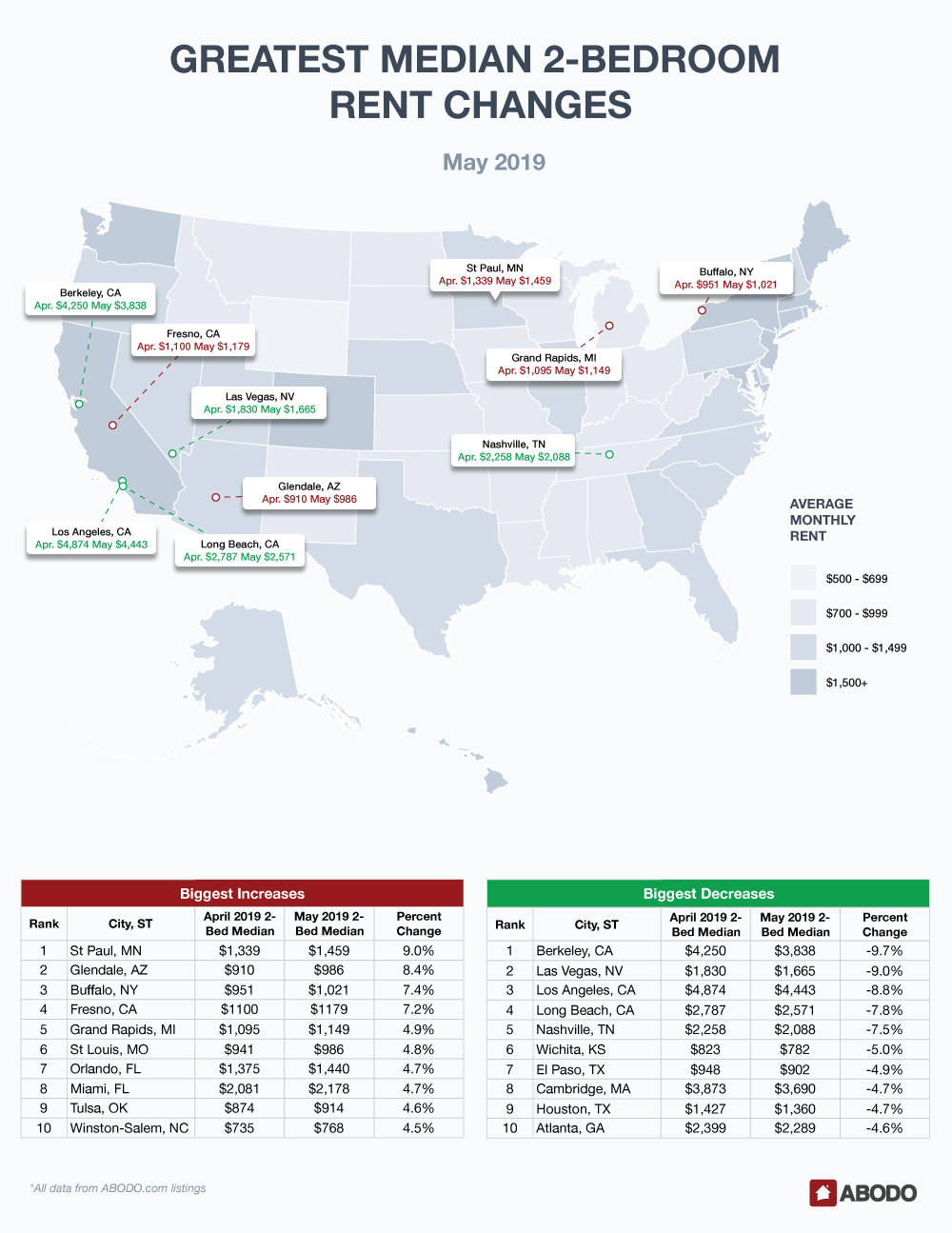 Wichita, KS posted the cheapest two-bedroom rent by far as it lost 5 percent at $782.

We saw more volatility in May as near double-digit rent increases and decreases headlined our report. We contrast this with a steady but upward stock market trend that portends well for a gently expanding economy.

While oil prices had posted a torrid gain from their lows of around $46 per barrel, crude lost almost 5 percent on April 26th, taking some forward pressure off gasoline process and in turn putting more disposable dollars in the hands of consumers.

Therefore, we just don’t think we are going to see a severe economic downturn appear quickly, so we are cautiously predicting a modest continuing increase in apartment rental prices.

Be sure to read the June report to see if this trend verifies.

Each month, using over 2 million Rentable listings across the United States, we calculate the median 1-bedroom and 2-bedroom rent prices by city, state, and nation, and track the month-over-month percent change. To avoid small sample sizes, we restrict the analysis for our reports to cities meeting minimum population and property count thresholds.