What are the best places to live in the US? This is a question we get often.

At Rentable, our focus is usually on destinations: We help people who are moving find apartments in new cities. But what about the places they leave and what about popular cities? We want to answer as many questions as we can to help renters. Yes, even questions like “how much does Marijuana legalization impact the housing market?”

According to the FiveThirtyEight, the average American moves over 11 times in his or her lifetime. That makes the United States’ population one of the world’s most mobile — especially Millennials, who made up 43% of all movers between 2007 and 2012 — even though internal migration has slowed dramatically over the last 40 years.

Which of the best places to live in the US are people leaving the fastest? How much of an impact does internal migration have on popular cities, or domestic migration, have on major U.S. metropolitan areas? We were interested in understanding this aspect of the moving process, to better understand how Americans — renters and homeowners alike — make their way across the 3.8 million square miles of their country.

The results were not always what we expected when looking at popular cities in America.

The 10 Cities People Are Leaving Fastest

If all you look at is the number of people moving out of cities — without considering the number moving in — the results appear staggering. In sheer numbers, huge metropolitan areas like New York City and Chicago steal the show. But if we examine the local percentage of the population on the move, the picture shifts. 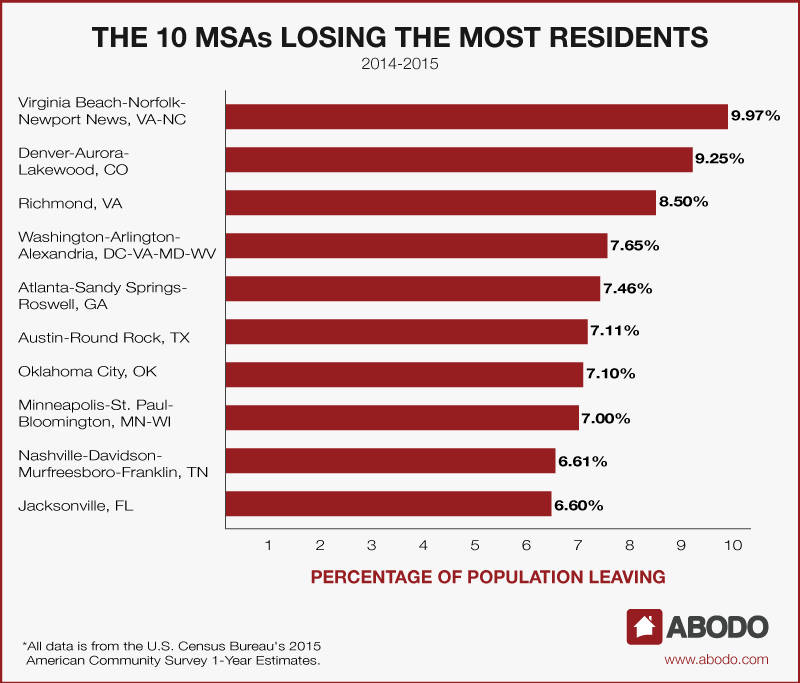 Of the 50 most-populated metropolitan areas in the country, Virginia Beach, VA, tops the list with the largest proportion of people moving out. Between 2014 and 2015, nearly 10% of the population fled the city — an astounding 1 out of every 10 people — for a different U.S. location, whether elsewhere in the state or across the country. Not far behind Virginia Beach, VA, is Denver, which had 9.25% of its residents move out, and Richmond, which saw 8.5% leave. Lower on the list are bustling cities like Atlanta, Austin, Nashville, Minneapolis, and Portland — even Washington D.C.

For comparison, the Detroit area, which previously had a steep population decline in the 1990s and early 2000s, saw just 4.68% of its population move out, Miami 4.12%, Milwaukee 4.97%, and NYC 4.6%. Of the 50 most-populated metropolitan areas in the country, Buffalo and Los Angeles had the lowest rates, at just under 3.5%.

The 10 Popular Cities People Are Moving Into Fastest 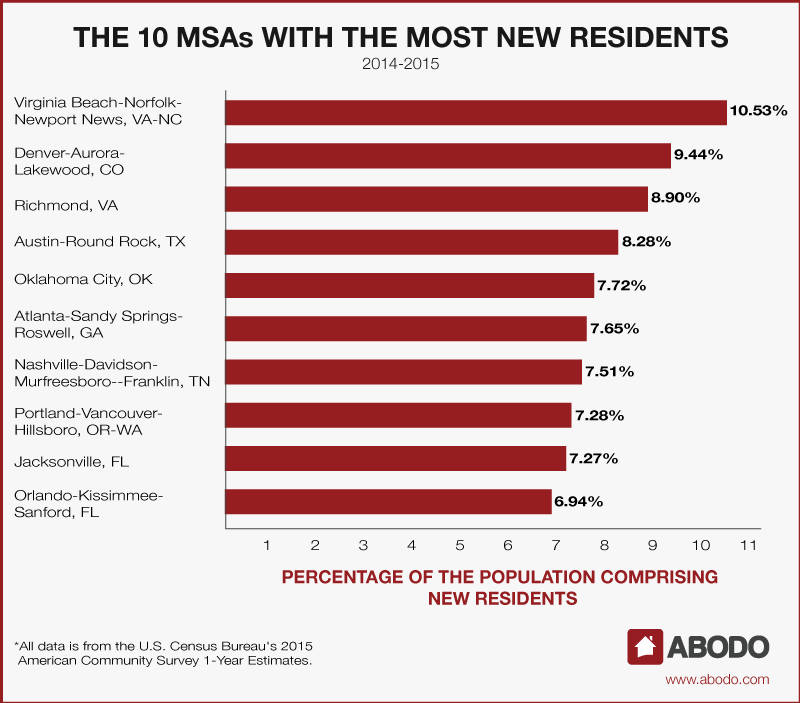 As fast as people are leaving Virginia Beach, they’re coming into the oceanside city even faster. Of the top 50 most-populated metro areas in the country, Virginia Beach takes first place for largest percentage of new residents from elsewhere in the U.S. between 2014 and 2015, with 10.53%.

Also as in the above section, Denver takes second place, with 9.4% of its population comprising new residents. The Denver Post, noting that Colorado has a higher moving rate than any other state, likened Denver to Ellis Island. It’s often the first place people land when they relocate to the state, and is a huge draw for Coloradans from more rural areas as well. (And as we saw above, people leave rapidly as well — adding to the Ellis Island “gateway” effect.)

All in all, the top 10 cities gaining new residents the fastest is remarkably similar to the list of cities people are leaving the fastest — comprising arguably some of the most popular cities in the nation.

Precisely why is unclear; it could be that people chase careers into the city, and continue to chase them out. Many of these cities — including Austin, Portland, Denver, and Atlanta — are some of Millennials’ favorite cities, and Millennials love to be on the move. In the case of Virginia Beach, home to a surprising 10 colleges, the population inflow and outflow could be driven by the changing student population or turnover in oceanside vacation homes.

As you can see, percent change of population in popular cities due to departure doesn’t always tell the whole story. Many large metropolitan areas experience considerable year-to-year churn, with departing residents replaced by newcomers, sometimes in nearly equal numbers.

It’s necessary, then, to also examine net domestic migration: the number of departing residents minus the number of new arrivals, all moving to or from other U.S. cities. The resulting number, when expressed as a percentage of the MSA’s total population, gives a more accurate appraisal of how a city’s overall population is affected. 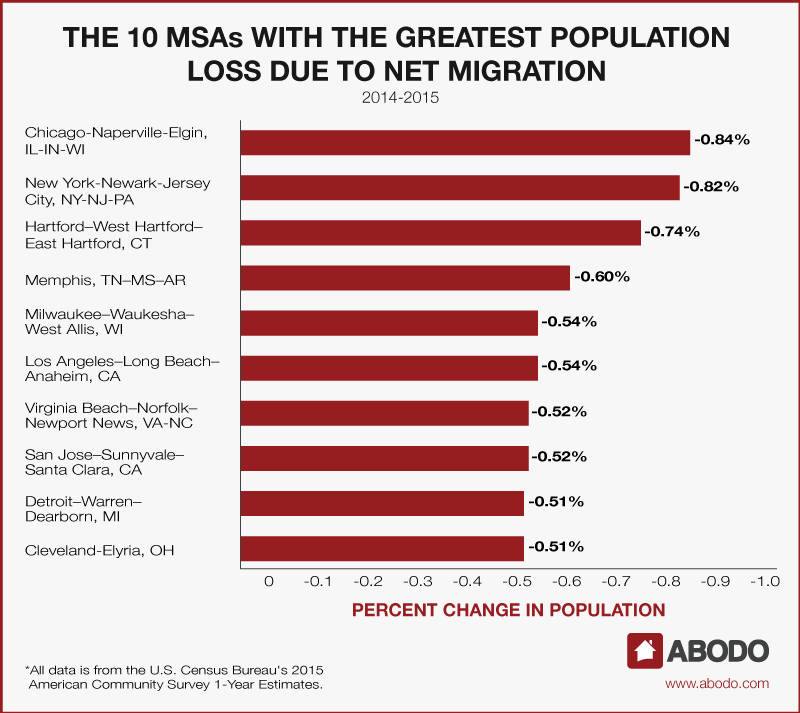 When expressed in this manner, a few new Metropolitan Statistical Areas pop into the list for 2014 to 2015. Chicago-Naperville-Elgin leads the way: Even after accounting for new residents, its population declined by .84% due to domestic migration between 2014 and 2015. New York-Newark-Jersey City isn’t far behind, with an overall decrease of .82%. That might not sound like a lot, but in a population of over 20 million, that comes out to the Big Apple being 168,799 people smaller. Hartford-West Hartford-East Hartford follows closely behind, with a net loss of .74%.

There’s quite a drop-off between Chicago, New York, and Hartford and the next grouping of MSAs on this list. Memphis (-.6%), Milwaukee-Waukesha-West Allis (-.54%), Los Angeles-Long Beach-Anaheim (-.54%), Detroit-Warren-Dearborn (-.51%), and Cleveland (-.51%) all lost more than half of a percent of their populations.

Momentary blip, or long-term trend as a popular city? Expanding the time frame to three years, 2012 to 2015, changes the order a little bit and swaps San Jose-Sunnyvale-Santa Clara for Philadelphia-Camden-Wilmington. 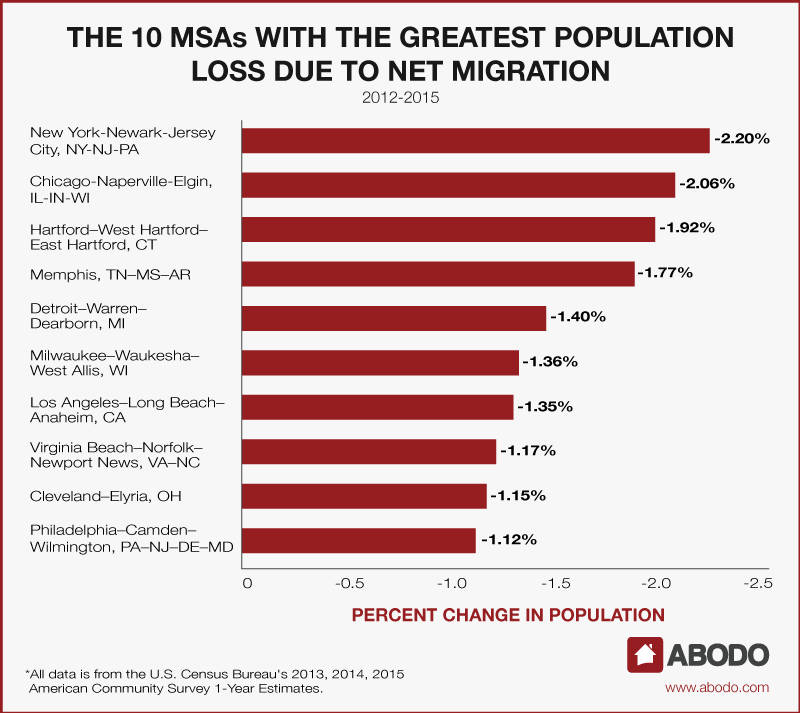 Such a consistent order points to a trend. And though traffic-weary Angelenos might welcome more than a few departures, the exodus isn’t great news for struggling Midwestern cities like Detroit and Cleveland. Detroit, especially, has been losing residents for decades and as a result is facing a massive foreclosure crisis and a bleak economic future. Its three-year loss of 1.4% of its population reflects the ongoing challenge city planners and business owners face as they attempt to revive the struggling city. 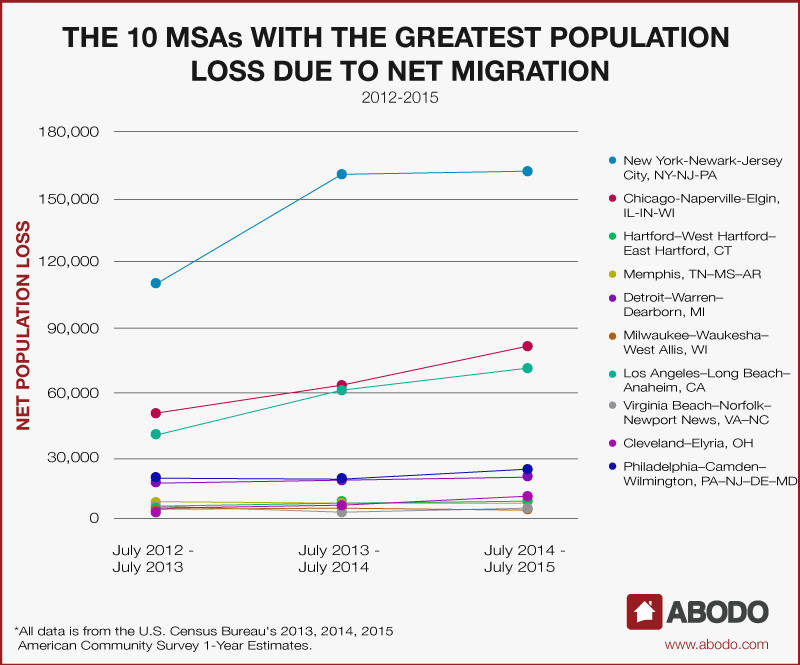 In general, the biggest changes year-over-year were between 2012 and 2014. That’s when the largest MSAs on the list — New York-Newark-Jersey City, Chicago-Naperville-Elgin, and Los Angeles-Long Beach-Anaheim — exhibited the most precipitous drops in population due to domestic migration. (Remember, the numbers on this graph refer to the number of people the city lost due to migration.) The other MSAs on the list show more moderate losses, but the trend is constant: Even if the rate levels off over time, these cities are still losing thousands every year.

Our analysis paints an interesting picture of American moving habits. By every metric, the cities Americans are leaving in the highest numbers are some of the country’s largest: New York, Los Angeles, Chicago. And yet these cities’ size insulates them somewhat from true net population loss: Americans are also moving to those places. The new residents’ numbers might not comprise as high a percentage of the population as other American cities, but that’s a reflection of just how populous some of these metropolitan areas are: It’s harder to make up 3% of the population in New York City than it is in, say, Cleveland.

Indeed, some of the cities most affected by internal migration are mid-size MSAs. And though our data doesn’t allow us to track movement renter-by-renter — unlike migratory birds, we can’t attach radar trackers to the ankles of anyone planning a move — it’s tempting to align strong migration to cities like Denver, Austin, and Oklahoma City with population loss on the coasts. Tempted by drastically lower rents, lower costs of living, and increasingly robust job markets, are Americans searching for the land of opportunity beginning to move inland?

It’s hard to say. But one thing’s for certain: They aren’t shy about moving.

We selected the 50 most populous Metropolitan Statistical Areas in the U.S. and analyzed domestic migration data for each. First, we collected data on geographic mobility by previous residence (residence one year ago) from the U.S. Census Bureau 2015 American Community Survey 1-year Estimates. We added the total number of people who moved from an MSA to another county within the same state and the number who moved to another state to determine the total number of people who moved out of each of the 50 MSAs between July 1, 2014, and July 1, 2015. The number who moved to a foreign country was not included. Dividing these numbers by the July 1, 2014, population estimates gave us the percent of the population that left each MSA for another part of the country from 2014 to 2015.

We similarly analyzed data on geographic mobility by current residence to determine the number of people who moved into each of the 50 MSAs between July 1, 2014, and July 1, 2015. Again, we added the number moving into each MSA from another state or from another county within the same state to get the total number moving into each MSA and converted that number into a percent increase in population.

We then analyzed American Community Survey net domestic migration data from the U.S. Census for each of the 50 MSAs and converted the number of increase or decrease into a percent population change.