What Millennials want — an almost impossible question to answer.

What do you look for in a city? Perhaps you prioritize the millennials in the workplace mindset. Or maybe you care most about abundant parks and hiking trails, a bustling downtown filled with restaurants, or a convenient public transit system to get you where you need to go.

To find out what Millennials want in a city, we surveyed 2,000 people born between 1982 and 1998 to determine just what qualities are important to them, and which city they thought had it all. After ranking the desired qualities, we were able to determine how various cities fulfilled these wishes. 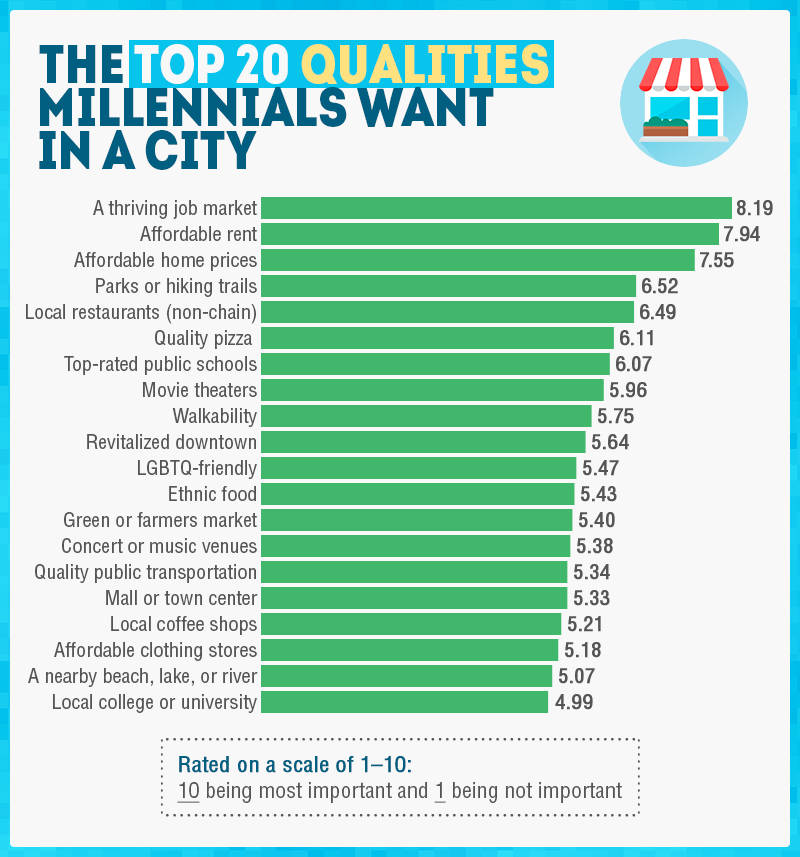 First, we asked Millennials to rank their desired qualities in a city on a scale of 1 to 10 – with 10 being the most important. Their top priority? A thriving job market – the only factor to average a ranking above 8. Affordable rent and affordable home prices were the second- and third-most-coveted features.

Interestingly, outdoor spaces (such as parks and hiking trails) matter slightly more than local restaurants, pizza places, and movie theaters. And top rated public schools matter more than movie theaters. With Millennials becoming parents, these categories are bound to be a priority.

HOW DO MILLENNIALS’ PRIORITIES CHANGE OVER TIME AND BY GENDER? 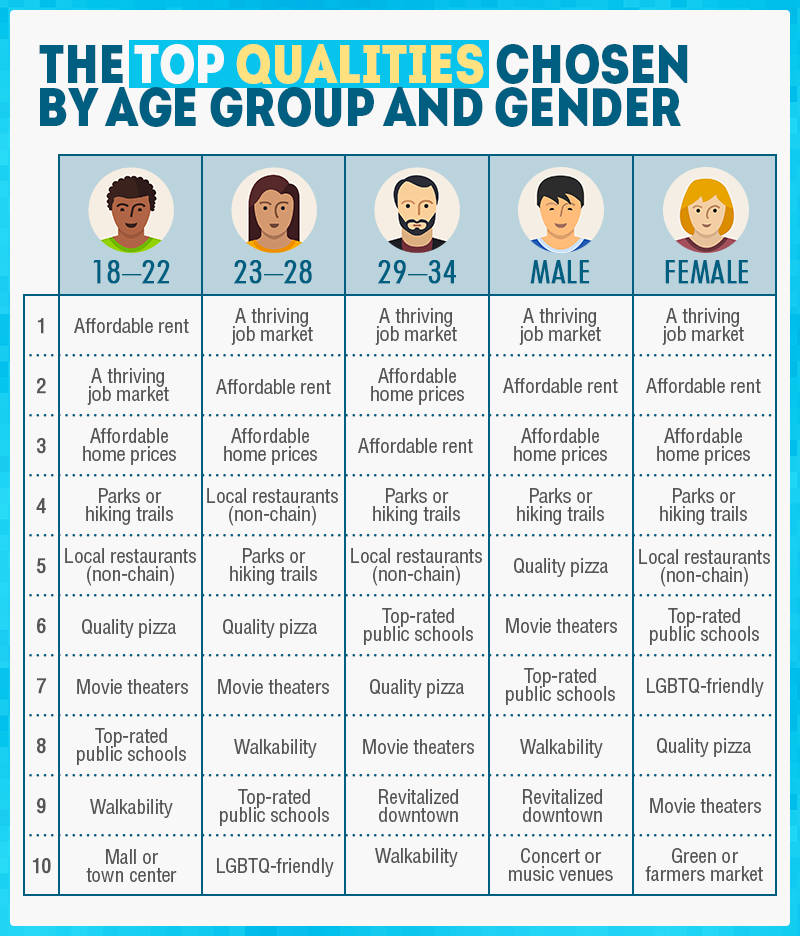 Men and women had identical lists in the top four spots, but differences in priorities reveal themselves at the fifth spot. Men consider good pizza and movie theaters more important, while women opt for local restaurants and top rated public schools. A revitalized downtown and concert or music venues appear only in the male top 10, while a green or farmers market and LGBTQ-friendliness appear only in the female top 10.

WHICH IS MORE IMPORTANT: CHEAP RENT OR AFFORDABLE HOUSES? 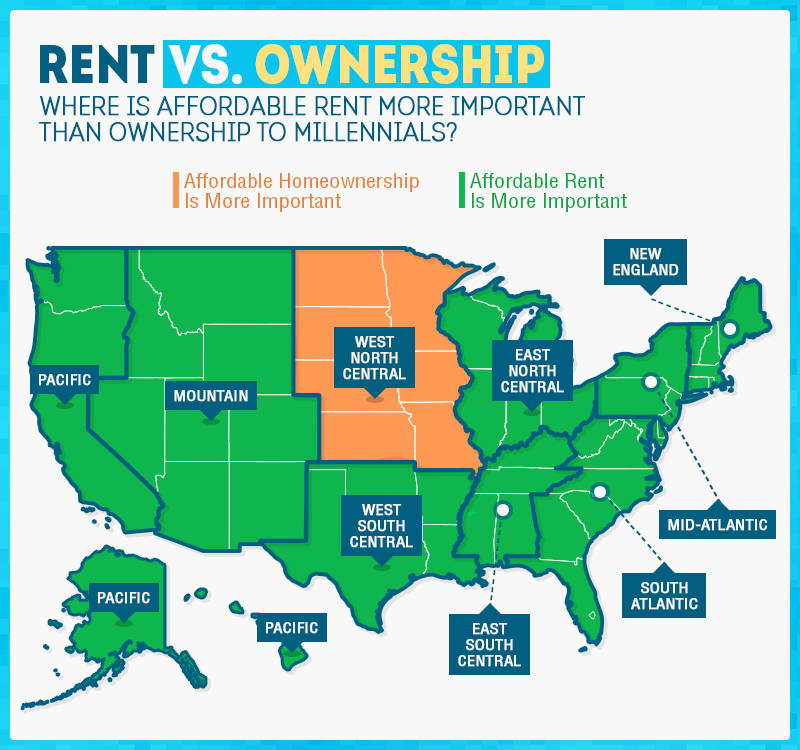 Conversely, only one region believes affordable homes are more important than affordable rent. In West North Central, it seems more Millennials are looking to buy rather than rent. However, their fellow Millennials in the rest of the country are not.

MILLENNIALS IN THE WORKPLACE? 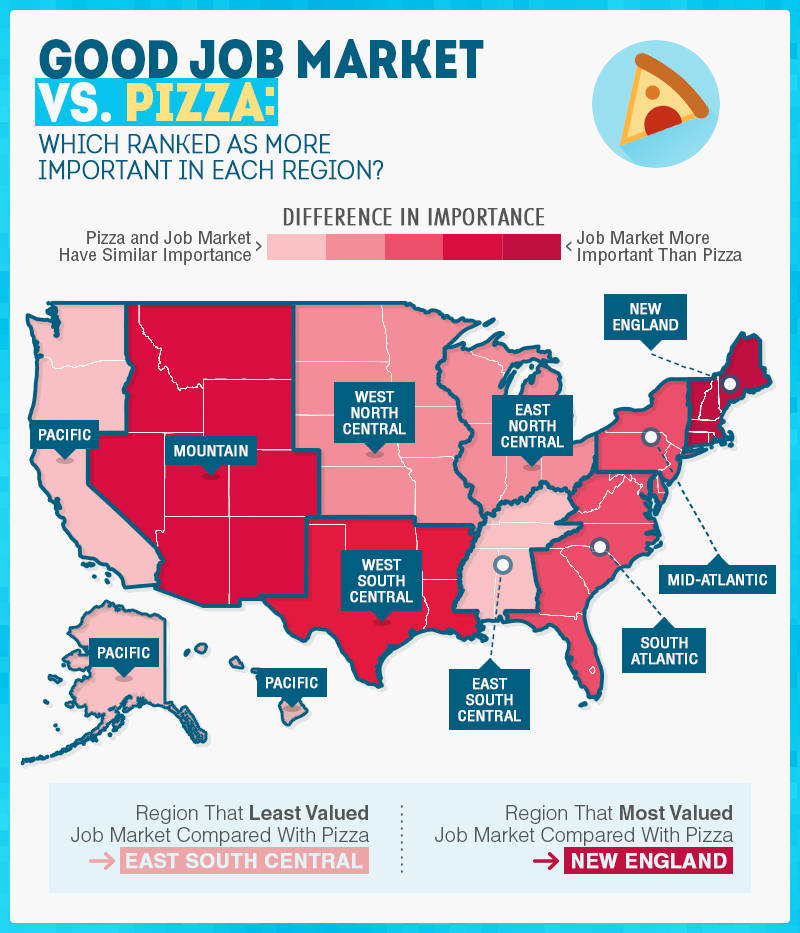 A healthy job market for Millennials in the workplace topped the wish list of Millennials overall – but ample opportunities to eat quality pizza mattered more to some than to others. Respondents from East South Central (Tennessee, Mississippi, Kentucky, and Alabama) ranked good pizza access only a couple of points away from a thriving job market. Pacific region residents were just slightly behind in their pizza prioritizing.

On the other hand, New England seem to crave a strong job market for Millennials in the workplace more than they do pepperoni with extra cheese – and the Mountain and West South Central regions share that sentiment.

WHICH CITIES DO MILLENNIALS LOVE? 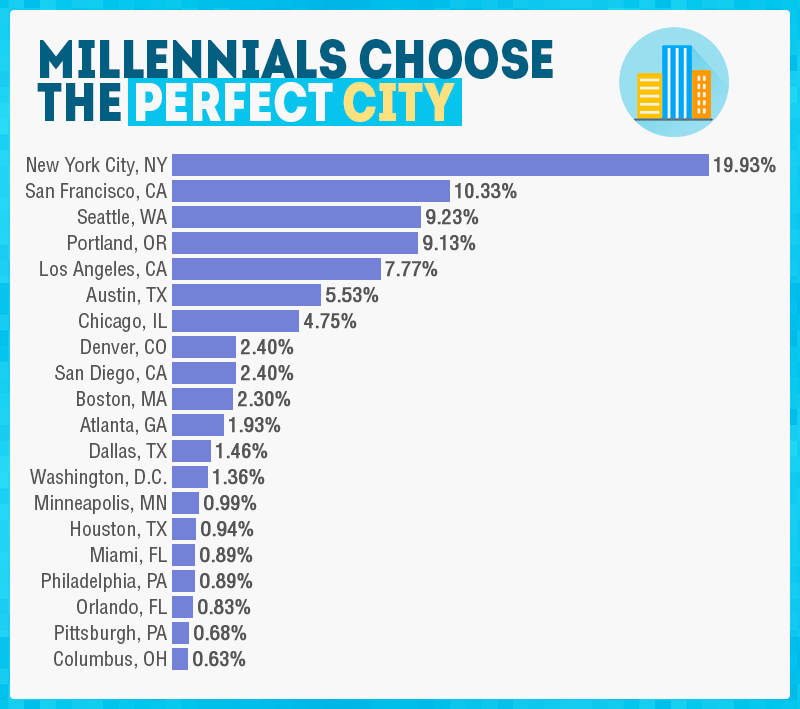 So which cities do Millennials think are the best choice for them? Although 4 of the top 5 cities are located in the West, the clear winner is in the East: Nearly 1 in 5 respondents say New York City is the place to be.

Just over 1 in 10 say San Francisco fits the bill, while nearly 1 in 5 dream of the Pacific Northwest: Seattle is the favorite for 9.2 percent of people and Portland for 9.1 percent. Los Angeles comes next, followed by Austin, Chicago, Denver, and San Diego. 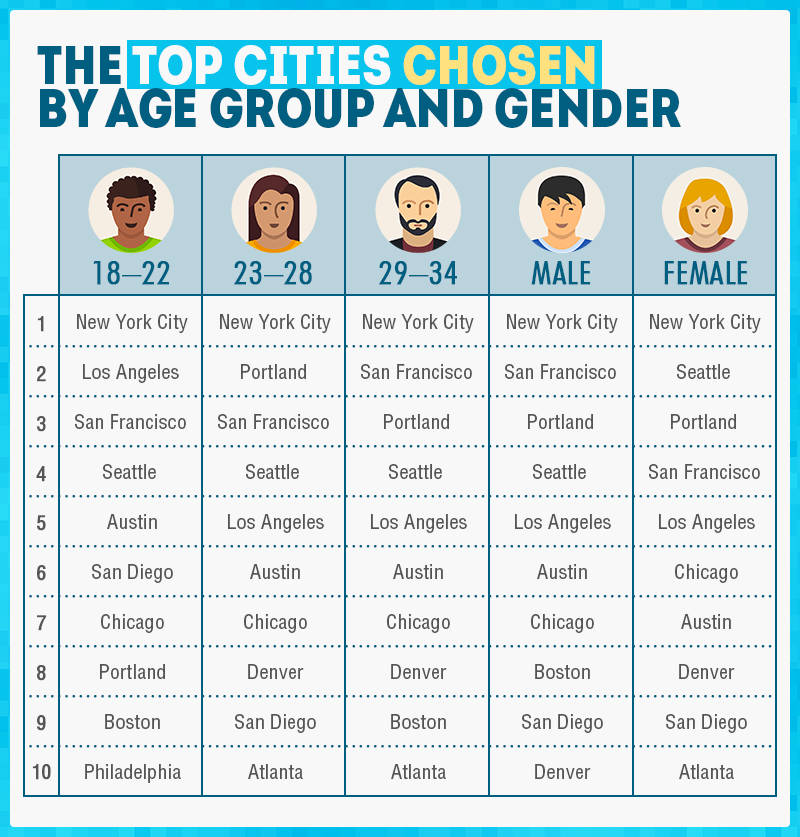 Next, we looked at the cities Millennials of each gender and age group rated as their favorites. Across all ages and both genders, New York City emerged as the leader.

San Francisco also likely attracts millennials due to its pet-friendly vibes, the city could have more canine residents that human residents and this is a traditionally a big plus for millennial when deciding on an area to live,” said Dr. Ros Dench of Gentle Dog Trainers

San Francisco, Portland, Seattle, and L.A. round out the majority of the top 5 for all groups save for one: The youngest Millennials rank Austin as their fifth choice.

WHICH MILLENNIALS PREFER EACH CITY?

Next, we compared respondents’ current city with their dream cities. Atlanta and Chicago residents were most likely to pinpoint NYC as a great place to live. Millennials from Philadelphia would love to live in Seattle. Milwaukee residents think Denver sounds good. People from Pittsburgh? They prefer Portland.

DO THE “PERFECT” CITIES HAVE IT ALL? 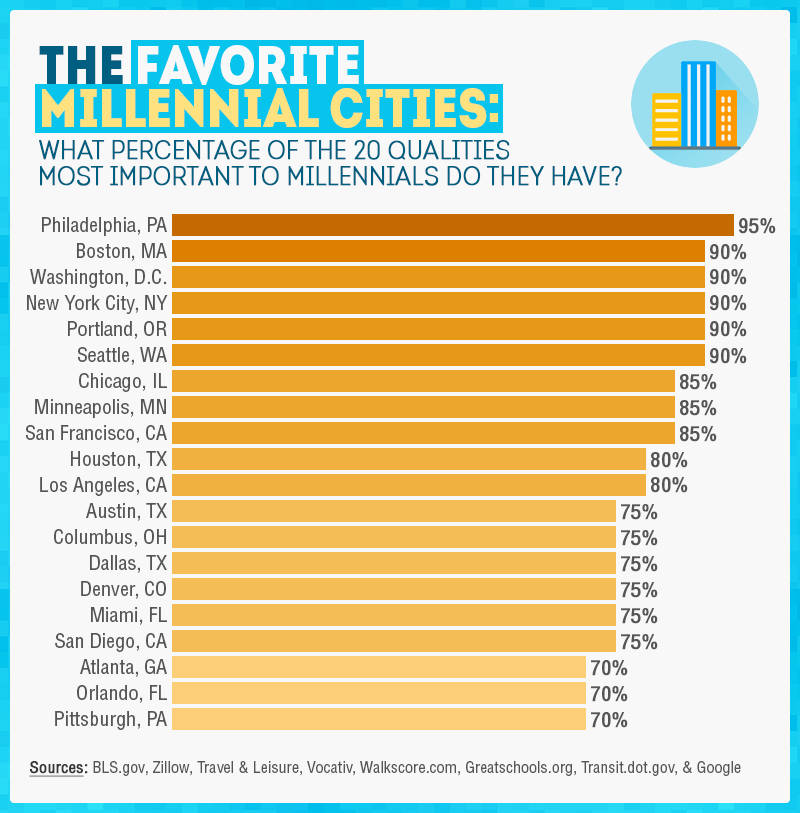 We now know all about Millennials’ desires when it comes to a place to call home – but which cities actually fit Millennial priorities? Philadelphia hit 95 percent of Millennials’ criteria, followed by Boston, Washington, D.C., New York City, Portland, and Seattle at 90 percent apiece.

Which favorite Millennial cities are lacking in important qualities? Orlando, Atlanta, and Pittsburgh fell to the bottom with 70 percent.

WHAT DO THE “PERFECT” CITIES LACK? 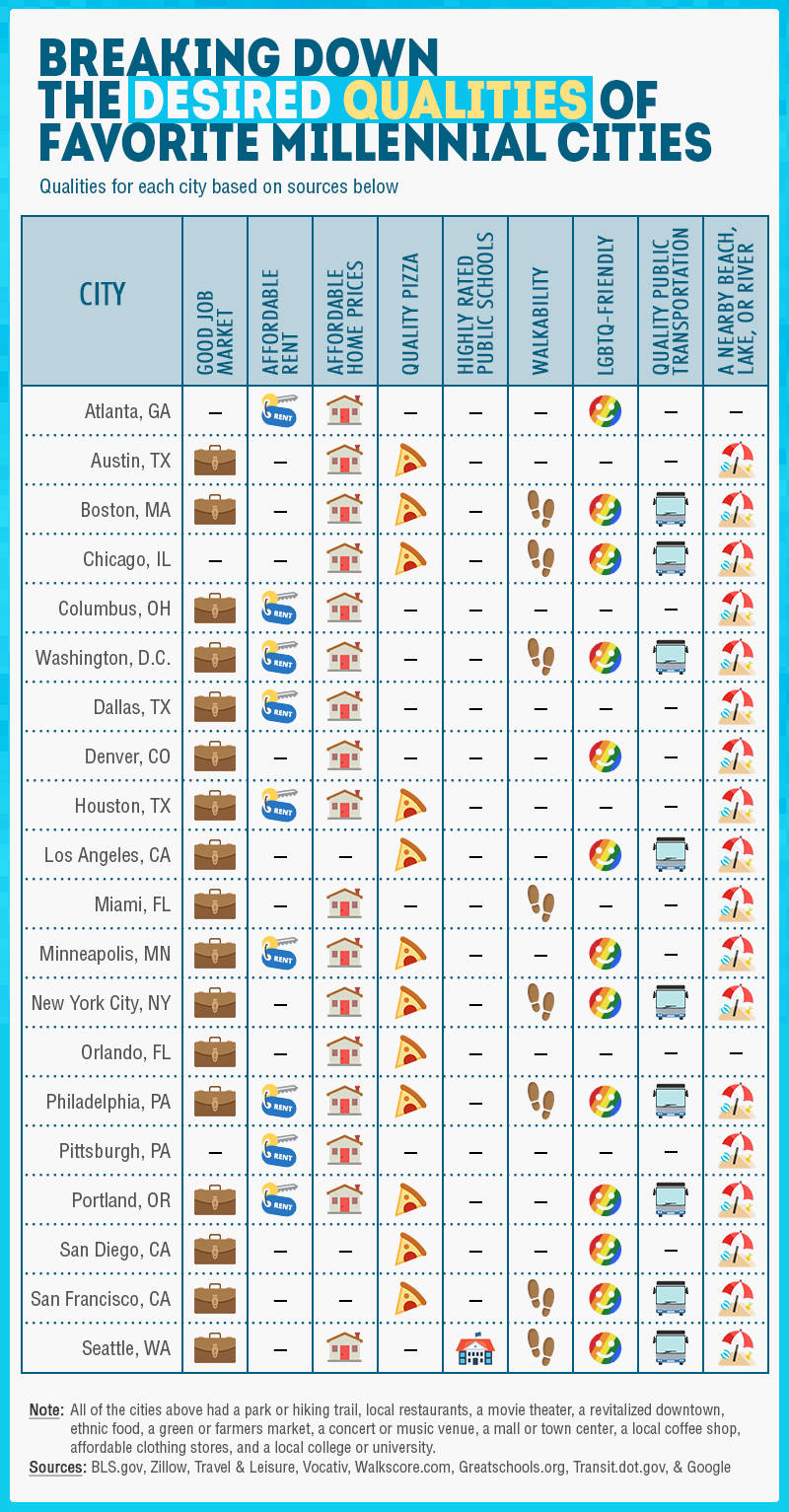 Many cities lost points for lacking affordable rent or home prices, while others, like Atlanta and Orlando, were not close enough to a body of water. Eight cities were not known for having quality pizza, such as Seattle and Miami.

When it comes to finding the right city, Millennials know what they want. While practical factors like housing and jobs come first on their priority lists, Millennials also long for features that will enhance their lifestyles, like nature, great food, and entertainment.

While many Millennials want to live in specific areas like NYC, San Francisco, and Seattle, there are plenty of other cities that fulfill their needs like Philadelphia, Boston, D.C., and Portland.

What’s your ideal city? At Rentable.co, the home you love may only be a few clicks away. You can choose from over a million apartments across the country – whether in your current location or in the city of your dreams.

For the last two assets to ascertain whether the chosen favorite cities had Millennials’ top 20 city qualities, we used the sources listed below. For home and rent affordability, the rent or mortgage could not exceed the 30 percent income standard. For a good job market for millennials in the workplace, a city’s unemployment rate could not surpass the national average of 5.1. A city’s Walk Score rating had to be at least a 70, and its Greatschools.org rating had to be at least an 8.

You’re welcome to share the images found on this page freely. When doing so, please attribute the authors by providing a link back to this page so your readers can learn more about this project and the related research.