We identified a potential rent market bottom in our July apartment report, and September stats continue that upward trend for both one and two-bedroom units.

Median national one-bedroom apartment rents rose .86 percent or $9 as the decrease that peaked in June at 3.92 percent has now been reduced to a YTD decrease of 2.29 percent. 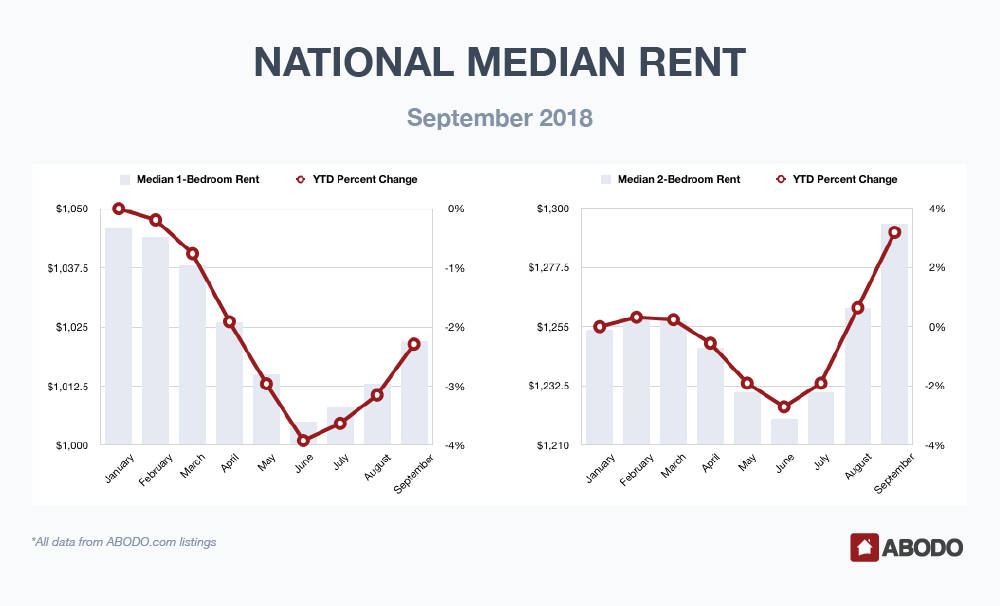 Two-bedroom units rose significantly in September completely erasing any deficit and are now showing a YTD 3.19 percent gain as residences that cost $1,254 in January are now priced at $1,294. 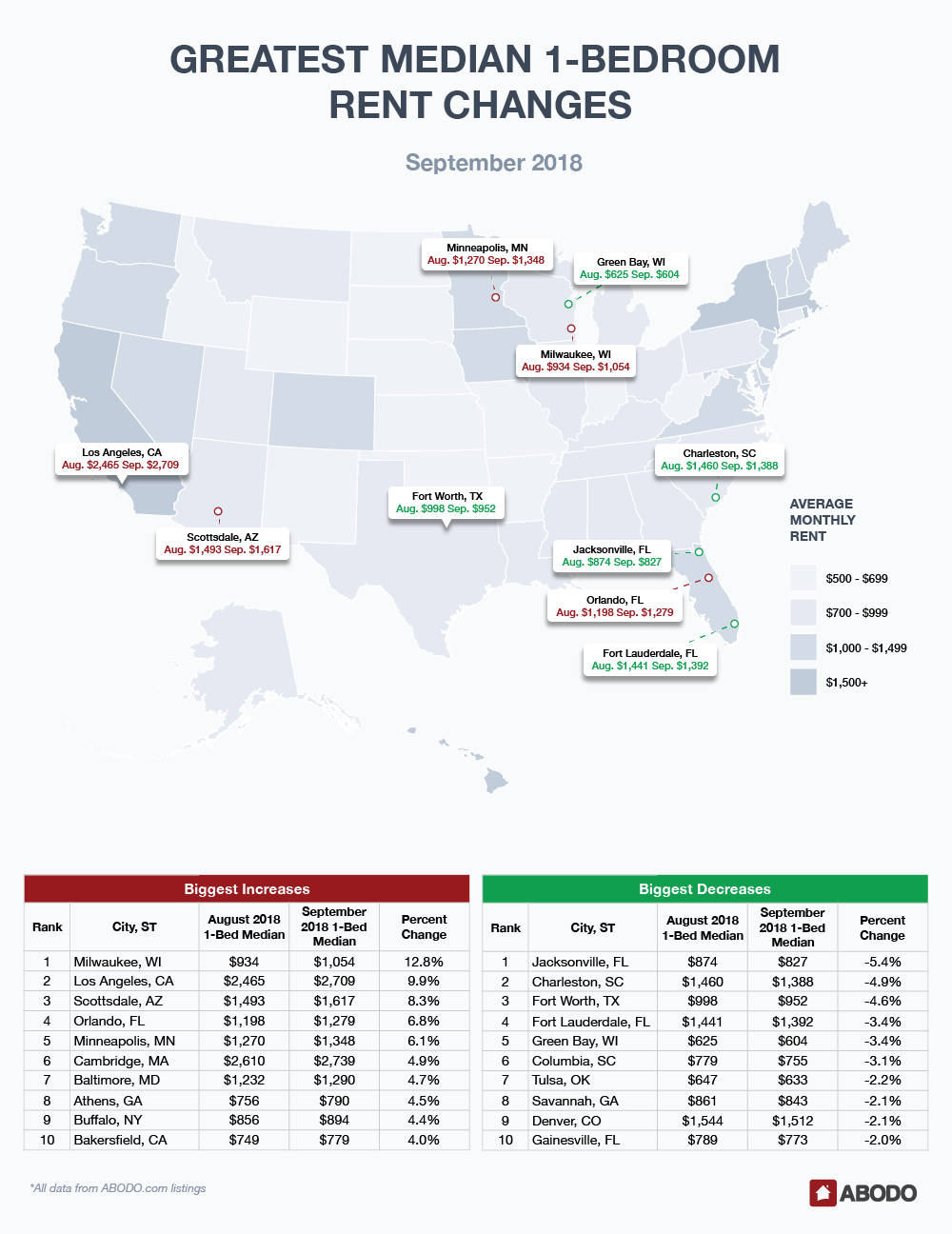 One-bedroom losers were led by Jacksonville, FL. That rental amount, even attractive in August when it clocked in at $874, fell a significant 5.4 percent to $827. Charleston, SC and Fort Worth, TX reported losses of 4.6 percent to 4.9 percent, followed by Fort Lauderdale, FL, Titletown, USA—also known as Green Bay, WI—and Columbia, SC, all posting smallish decreases in the low to mid 3 percent range.

Long Beach, CA was clearly the winner here, showing a 12.0 percent increase. What cost $2,090 in August rocketed to $2,342 in September. Soon to be cold Buffalo, NY and almost always pleasant Los Angeles, CA both rose in the low to mid 7 percent range. Atlanta, GA and Louisville, KY increased 6.5 and 6.1 percent respectively.

The bottom 5 winners were more tightly packed with Baltimore, MD and Milwaukee, WI at around 5.7 percent, Orlando and Tallahassee, FL in the 4 to 4.9 percent range, and San Francisco, CA rounding out the top 10 increasers. Note that the median two-bedroom San Francisco price, expensive at August’s $4,780, is even more formidable now at $4,955. We’ll see next month if San Francisco can pierce the $5,000 mark. 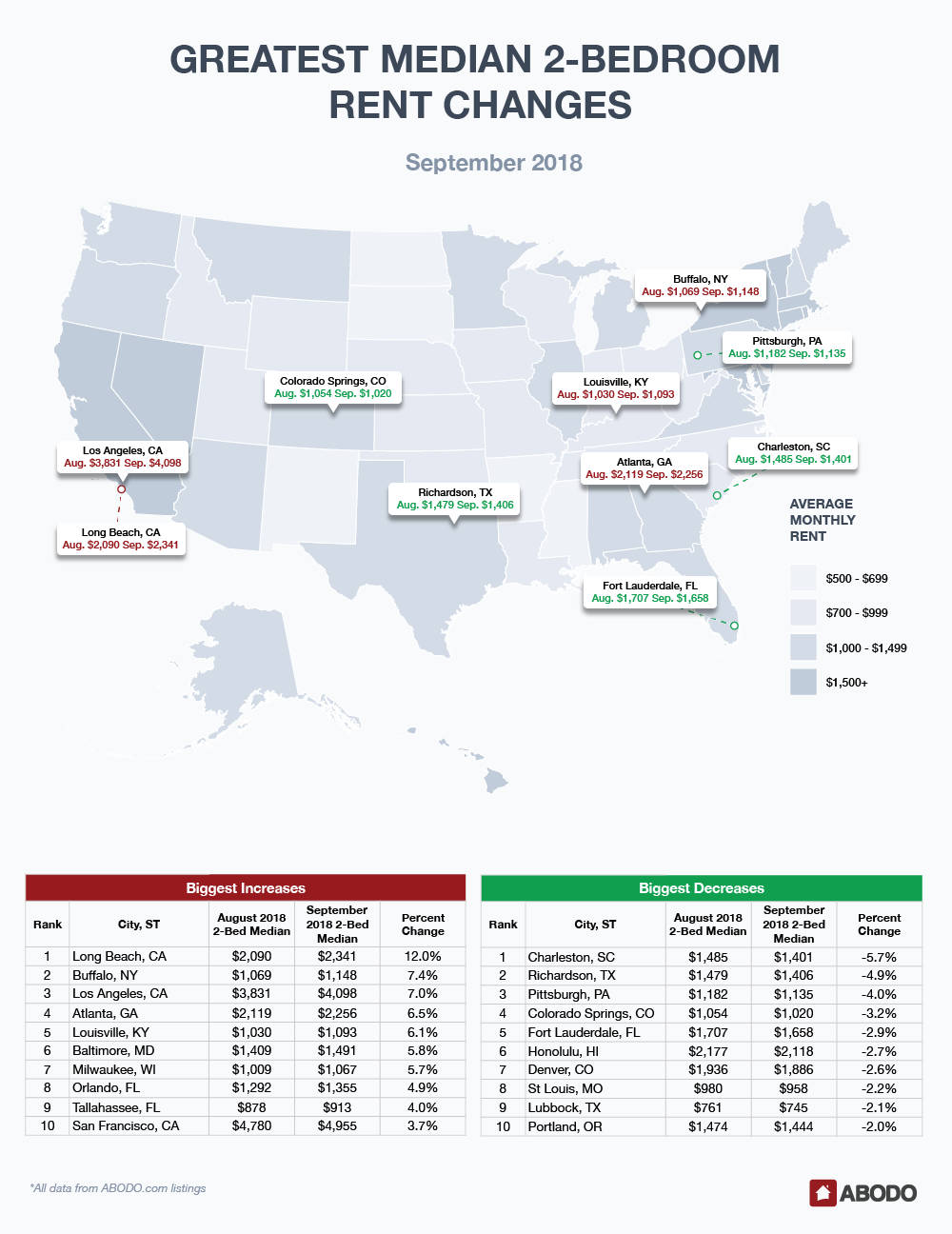 Drops were more tightly packed in September as Charleston, SC fell the most to $1,401, or 5.7 percent. Richardson, TX and Pittsburgh, PA fell 4.9 and 4.0 percent respectively, and the only other municipality reporting a decrease more than 3 percent was Colorado Springs, CO, reporting a 3.2 percent dip.

September Recap: Where We Stand

Many do not remember the ravages of the high inflation that were prevalent in the 1970s when auto loans for the well qualified were as high as 18 percent, but we’re not seeing a return to that climate soon.

As the Fed continues to raise interest rates, however, and the economy continues to heat up; while unemployment is low, and the single-family home shortage shows no signs of abatement, it follows that both one and two-bedroom unit prices will continue, on average, to rise.