In the United States, we pride ourselves on three fundamental ideals described by the Declaration of Independence: life, liberty, and the pursuit of happiness. Those three concepts culminate in what we’ve dubbed the American Dream — the ability of any citizen, regardless birth or net worth, to climb the economic ladder with hard work and dedication.

Among other markers of financial security, homeownership is a cornerstone of the American Dream. Even though many question if they’re ready to buy a house, for a large number of people, the flexibility of renting remains ideal. But for others, becoming a homeowner symbolizes is the pinnacle of adulthood — it’s a rite of passage. As we discovered in an earlier report, many Millennials are finding it a Sisyphean task to save for a down payment, falling well behind previous generations’ ability to purchase a home.

But how are other Americans faring, those that might already be vulnerable to financial insecurity? Minority children, for example, are four times more likely than white children to stay poor if born poor — despite promises of the American Dream.

To investigate further, we examined U.S. Census Bureau information on race, ethnicity, and homeownership to track where in the U.S. minorities are best able to keep pace with their white peers, how ownership rates have changed over time and by ethnicity, and how they’re affording to take the leap as homeowners.

Overall, when it comes to homeownership, minorities — including the Census’ categories of Asians, American Indians, Hispanics, black/African Americans, and other indigenous populations — lag behind the rest of the country: Nationwide, 63.1% of Americans own homes, compared with just 46% of minorities.

Let’s start by taking a look at where in the U.S. homeownership is most accessible for minorities.

Where Minorities are Buying the Most (& Fewest) Homes

The MSAs where the highest percentage of minorities own homes are largely in the South, Southwest, and West. Three are in Texas, three are in Florida, and the rest are in California, New Mexico, Utah, and Hawaii. Minority homeownership rates in each of these states exceeds 45%, and is highest in New Mexico, at 63.1% — which is equal to the national percentage of all Americans, regardless of race or ethnicity, who own homes. 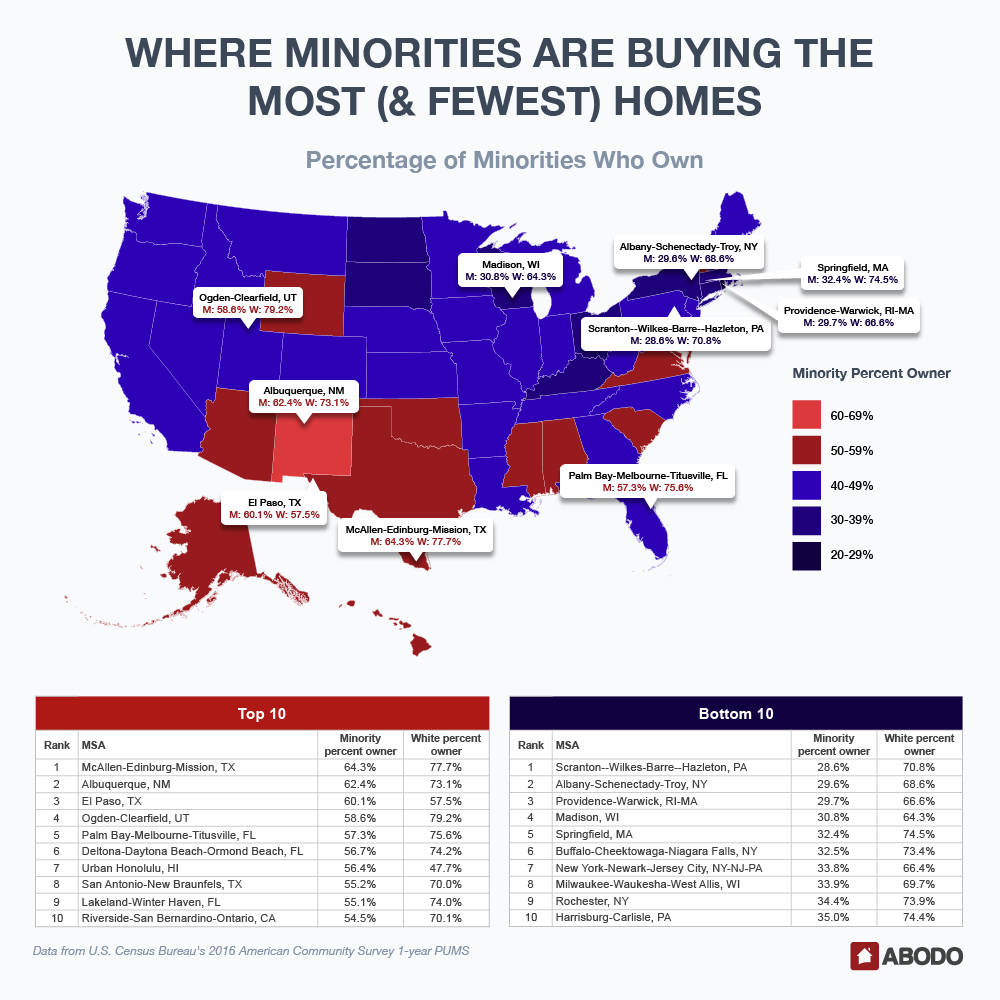 Such low percentages are par for the course in Wisconsin, where only 35.7% of minorities own homes statewide. That’s one of the lowest figures in the country, behind only the Dakotas, New York, and the District of Columbia.

A Closer Look by Race

Population metrics vary across the country, and “minority” encompasses dozens of ethnicities and identities. To get a better idea of homeownership demographics across the country, we identified the U.S.’s three largest minority groups — African American, Asian, and Hispanic — and examined the MSAs in which each group had the highest percentage of homeowners.

(When it came to race and ethnicity, we used the U.S. Census definitions. For more info, please see the methodology section at the end of this piece.) 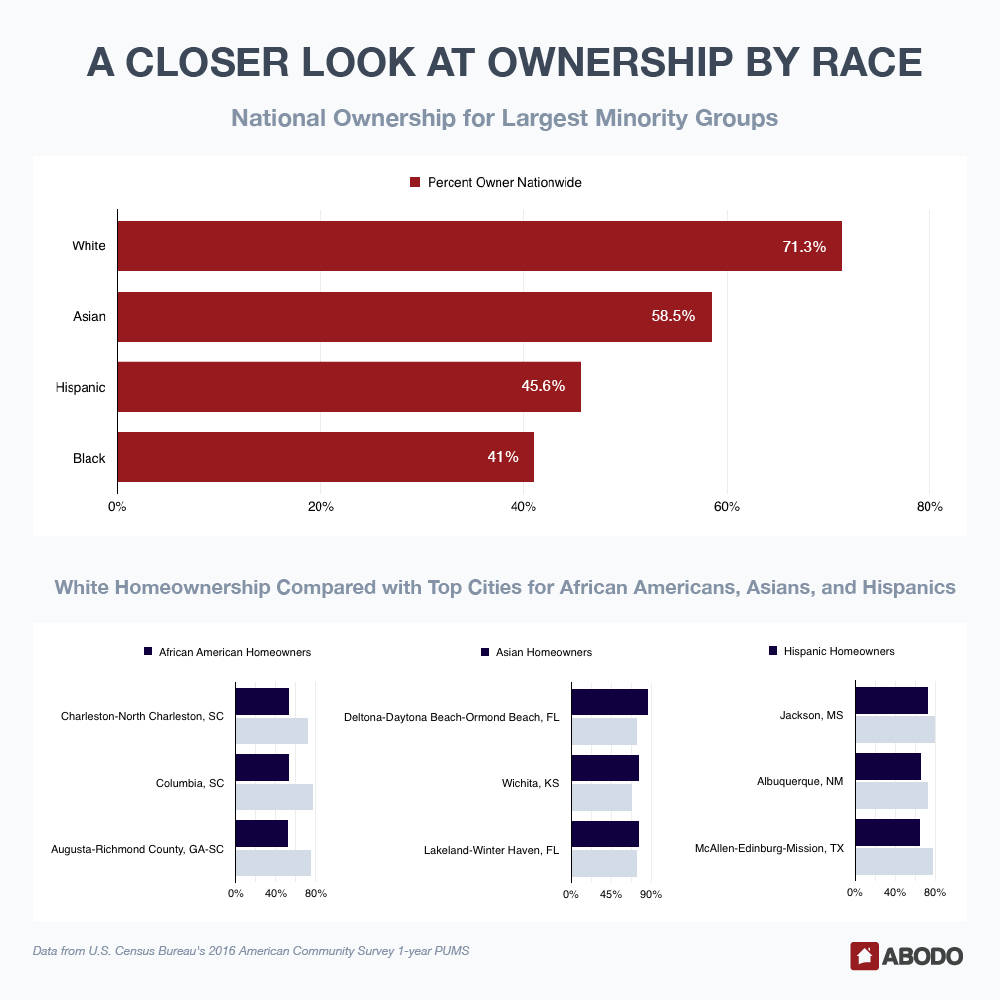 The three MSAs where African Americans are most likely to own homes are all in South Carolina. In Charleston-North Charleston, 53.5% of the black population owns homes. Columbia (53%) and Augusta-Richmond County (52.3%) have similar figures. The cities where African Americans were least likely to own homes were Spokane-Spokane Valley, WA (14.9%), and two MSAs you might recall from the list of MSAs with the highest minority homeownership rates: Urban Honolulu, HI (19%); and McAllen-Edinburg-Mission (19%).

Two familiar MSAs also appear on the list of MSAs where Asians are most likely to own homes. Deltona-Daytona Beach-Ormond Beach, FL, and Lakeland-Winter Haven, FL, were #6 and #9 on the list of cities with the highest percentage of minority homeowners. That can largely be explained by an extremely high prevalence of Asian homeownership: 85.9% of Asians in Deltona-Daytona Beach-Ormond Beach own homes, as do 76.2% in Lakeland-Winter Haven, outpacing white homeownership in both MSAs. Asian homeownership also outpaces white homeownership in Wichita, Kansas, 76.7% to 68.7%.

Our data indicates that even if an MSA has a high incidence of minority homeownership, some minorities might be more active in a particular housing market than others.

How has minority homeownership fared over time? Are more minorities homeowners now than 10 years ago? Are minorities seeking alternative financing methods, perhaps like a contract for deed? Or have minorities been consistently unable to purchase homes? 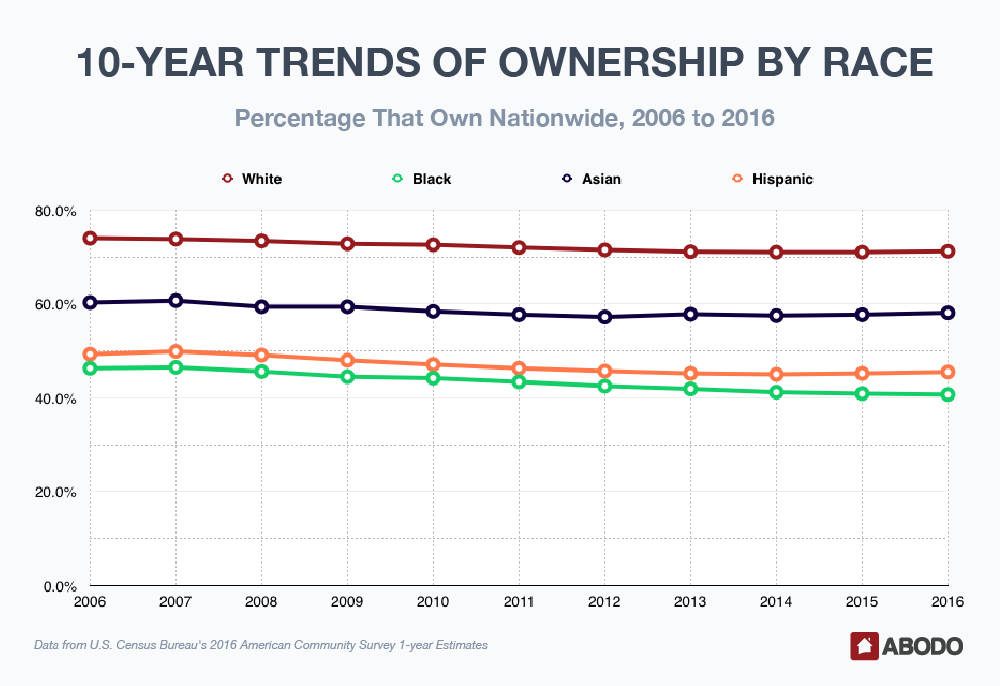 The Down Payment Hurdle

Aside from the down payment, housing payments for owners are pretty similar — occasionally even lower — than those for renters. But saving up 20% of the home purchase price, plus a little extra to keep in savings, can translate into decades of wait time.

Earlier, we discussed that in a few areas, some minority groups fared better than whites in terms of homeownership rates. But that is not the case when it comes to saving up for a down payment.

In our study, we used area median home values as the benchmark for a 20% down payment, and estimated that 15% of annual income would go specifically toward down payment savings. But with persistent income disparities between minorities and Caucasians, we found that even in the MSAs that require the fewest years to save up, it would still take minorities years longer than Caucasians to afford a down payment. 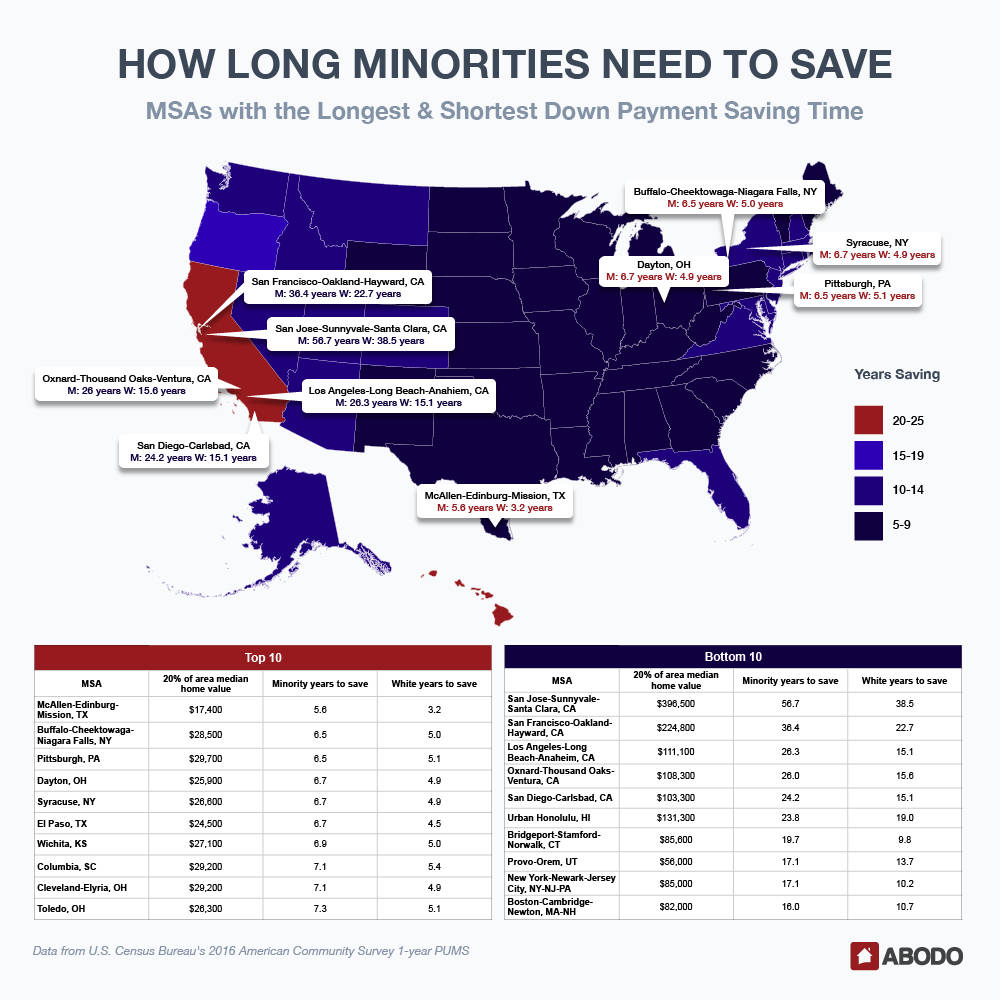 According to our formula, minorities in McAllen-Edinburg-Mission, TX, have the fewest years to save up, at 5.6. But whites in the McAllen area need to save for just 3.2 years. The next-shortest estimated wait is in Buffalo-Cheektowaga-Niagara Falls, NY, and Pittsburgh, PA, where minorities need to save for 6.5 years and Caucasians for about 5.

On the other end of the spectrum, where minorities struggle the most to save up for a down payment, the gap between white and minority saving time manifests in decades, not years. In San Jose-Sunnyvale-Santa Clara, CA, facing a nearly $400,000 down payment, white citizens need to save for an estimated 38.5 years. Minorities, meanwhile, need to save for almost 20 more years: 56.7.

Four other California cities round out our bottom five for estimated saving time — San Francisco-Oakland-Hayward, Los Angeles-Long Beach-Anaheim, Oxnard-Thousand Oaks-Ventura, and San Diego-Carlsbad — with time minorities need to save up ranging from 24.2 years to 36.4. In all of those cities, minorities need to save at least nine years longer than Caucasians.

The smallest gap in our bottom 10 is in Urban Honolulu, HI, where we estimate that minorities need to save for 23.8 years and white homeowners for just 19.

Naturally, the time it takes to save up for a down payment comes down to two factors: purchase price and income. Minority incomes lag behind white incomes in all of the country’s 100 largest MSAs. In Deltona-Daytona Beach-Ormond Beach, FL, the MSA with the smallest difference between median minority incomes and median white incomes, the gap is just $4,700, but in other cities, such as Bridgeport-Stamford-Norwalk, CT, it jumps as high as $29,500.

The above data was calculated based on the median value of homes in MSAs across the country — but, given that minorities face larger financial burdens in every area, we should also look at what types of homes they can actually afford. 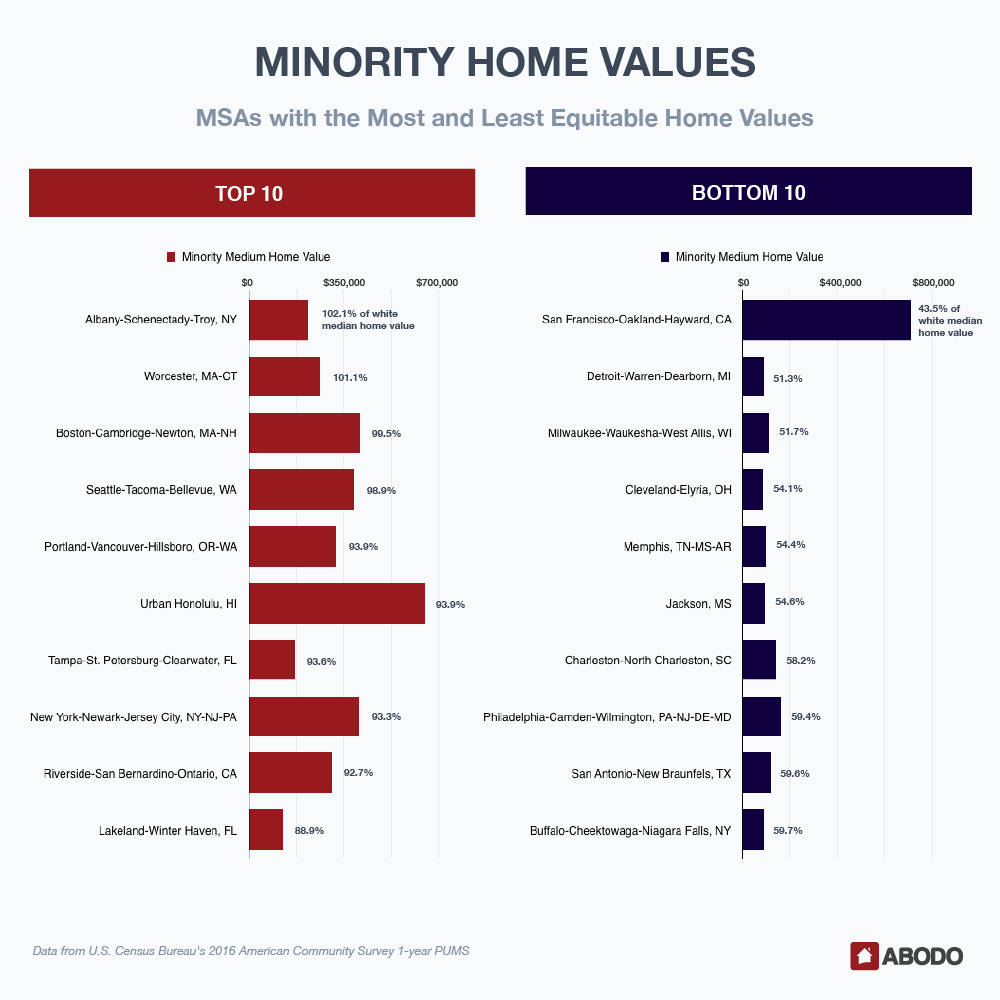 There are two MSAs in the country where minorities’ homes are more valuable than white owners’ homes in the area. In Albany-Schenectady-Troy, NY, minorities’ median home value is 102.1% of whites’ home value. Minorities in Worcester, MA-CT, fare nearly as well — their homes outpace white home values at 101.2%. Minority home values in Boston-Cambridge-Newton, MA-NH, and Seattle-Tacoma-Bellevue, WA, hover around 99%.

The good news is that, of the country’s 100 largest MSAs, two-thirds have minority home values that are at least 80% of local whites’ home values. However, where larger discrepancies exist, the gap is significant.

In San Francisco-Sunnyvale-Santa Clara, CA, where minorities would need to save an estimated 36 years to afford a down payment, minority home values are less than half of white home values — just 43.5%.

The next three cities on the list are also the top three on a recent list of most segregated cities in the U.S. Detroit-Warren-Dearborn, MI, and Milwaukee-Waukesha-West Allis, WI, both have minority home values sitting at 51% of white values, and Cleveland-Elyria, OH, does slightly better, at 54.1%.

All of our bottom 10 cities have median minority home values that are less than 60% of white home values.

Racial disparities in homeownership are the product of a complex web of systemic inequality, and this report touches only on a few shallow indicators, without considering education, occupation, immigration status, and myriad other elements that have known impacts on financial security.

Nonetheless, this data is compelling and, unfortunately, consistent enough to be able to point out a few clear trends. There is a basic income disparity in this country between minority and white citizens. In every MSA we studied, minority median incomes were lower than white median incomes. As a result, minorities (particularly African Americans) are significantly less likely to own homes, and they need to save up years or decades longer than their white peers to accumulate a down payment. When they do purchase, it’s a home that costs substantially less than the median white home value.

This data brings up sobering questions: How level is the playing field? And if minority citizens are so much less likely than their white counterparts to achieve home ownership, how applicable is the American Dream?

We used data from the U.S. Census Bureau’s 2016 ACS 1-year public use microdata sample (PUMS) to determine the percentage of householders who are homeowners for different segments of the population. We restricted our metro-based analysis to the 100 most populous MSAs. Because the PUMS uses only Public Use Microdata Areas (PUMAs) as the geographic identifier for each record, we used the IPUMS MSA-PUMA crosswalk tables to assign each PUMA to the MSA in which it lies. Occasionally a PUMA intersects multiple MSAs, so we only included a PUMA in an MSA if at least 50% of the PUMA population lives within the MSA.

Using these definitions, we calculated the percentage of householders who own their home in each MSA separately for the subset of Hispanics, Caucasians/whites, African Americans, and Asians, as well as all minorities together.

We used the ACS 1-year estimates for each year from 2006 to 2016 to analyze the change in percentage of homeowners for each race nationwide over 10 years.

We used the design factor method provided in the PUMS documentation to calculate the median home value as well as the median income for minorities and whites by MSA. Using these numbers, we estimated the number of years it would take a minority to save up for a down payment in each MSA by dividing 20% of the MSA median home value by 15% of the MSA minority median income.

The bulk of our above study was based on data for the 100 largest MSAs, but minorities are buying homes in cities of all sizes. To reflect those homebuyers, too, we’ve collected and analyzed data about the portion of minority homeowners, home values, and years to save up for more MSAs and grouped them with their peers.