Millennials, as the largest generation of adults, are currently the center of attention for the U.S. housing market and other parts in the world, including the Canadian housing market. The oldest members are now beginning to reach their mid-30s and financial stability — at least, hypothetically. Under scrutiny for poor money mismanagement and lack of cash buying power (see: avocado toast) while dealing with 20% lower earnings than Boomers and historically high student loan debt, Millennials are finally making headlines for increasingly becoming first-time home owners.

Still predominately a generation of renters, Millennial home owners are seeing a slight surge in home purchases (maybe their assessing the market and buying to make money?). According to The 2017 State of the Nation’s Housing report by the Joint Center for Housing Studies at Harvard, 1.4 million recent homebuyers were under age 35 in 2015. Still, the report also notes that this figure is well below pre-boom levels. The number of home owners over age 55 jumped by 13 percentage points to 54%, between 2001 and 2015, while the share of home owners under age 35 shrunk by 5 percentage points over the same period, to about 33%.

In an earlier report, we studied the phenomenon of Millennials living with parents in lieu of finding their own apartments. In this report, we’ll take a look at where Millennials have the best chances of buying a home, what types of homes they can afford, and the dwindling number of 18- to 35-year-olds able to make the investment.

Where Millennial Home Owners are Buying Most 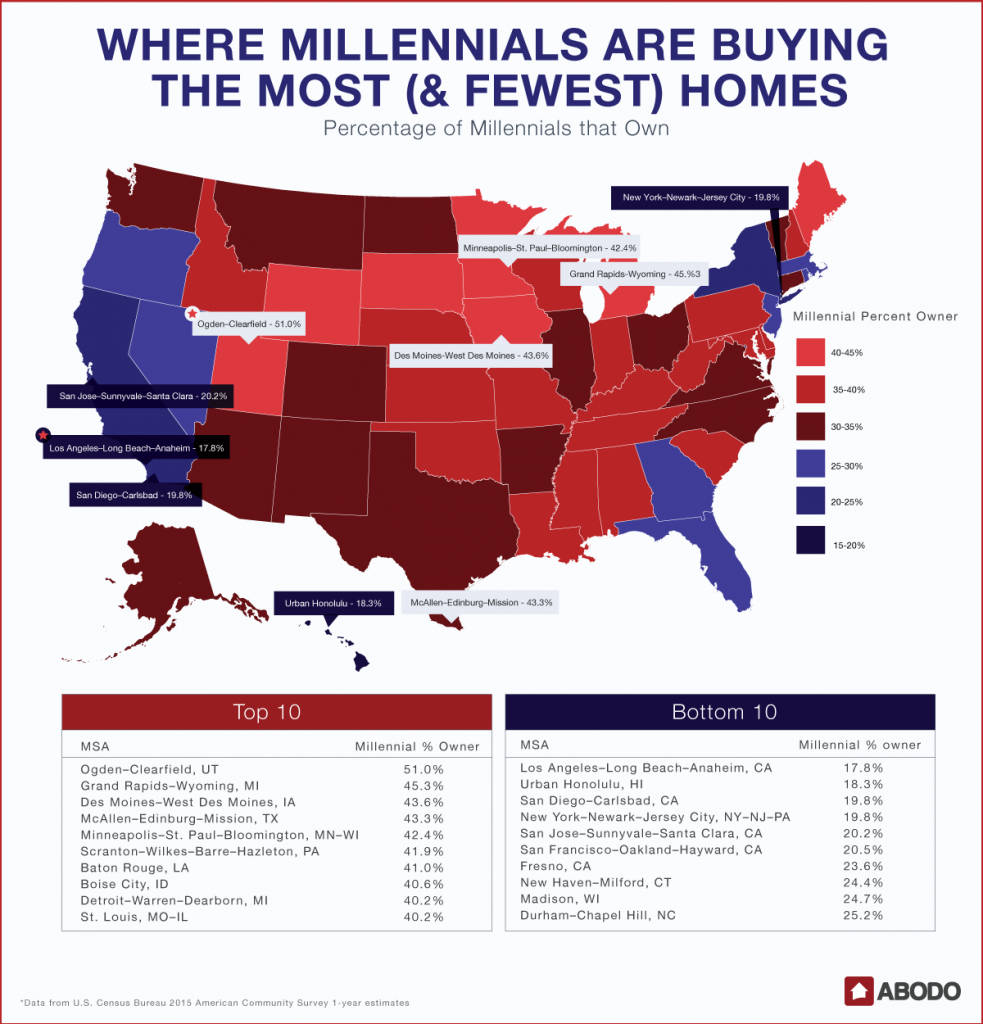 Nationally, 32.1% of Millennials are homeowners. But there are some MSAs that significantly exceed that mark. Leading the pack by a wide margin is Ogden–Clearfield, UT, where 51% of Millennials own homes, which is about 10% higher than the state as a whole. In every other MSA in the country, fewer than half of Millennials own homes, though Grand Rapids–Wyoming, MI (45.3%); Des Moines-West Des Moines, IA (43.6%); and McAllen–Edinburg–Mission (43.3%) come close. These are all small to midsize cities in the Midwest, South, and Southwest.

The MSAs whose Millennial populations are the least likely to own homes, on the other hand, are largely expensive coastal cities or smaller college towns. Los Angeles–Long Beach–Anaheim, CA, has the lowest percentage of Millennial home owners in the country, with only 17.8%. In Urban Honolulu, HI, only 18.3% of Millennials can afford some of the highest property values in the country. San Diego–Carlsbad, CA and New York–Newark–Jersey City, NY-NJ-PA, exhibit identical percentages of Millennial  homeowners: 19.8%.

High-density urban environments such as North Vancouver condos or New York City apartments generally have higher rental rates, as do MSAs with high college student populations. Three of the MSAs with very low percentages of Millennial home owners — New Haven–Milford, CT (24.4%); Madison, WI (24.7%); and Durham–Chapel Hill, NC (25.2%) — are college towns with a disproportionately high percentage of college-age Millennials, for whom renting or dorm life is usually a more feasible possibility than ownership.

Millennials aren’t the first generation to experience slowed home buying. And yes, Millennials are actually capable of figuring out how much home insurance they need. It’s not the little things holding them back. In fact, Generation X might have started the trend. Since 2005, long before many Millennials were old enough to drive, young adults 18 to 35 years old have been buying houses at a slower and slower rate. In 2005, 39.5% of young adults were home owners. In 2015, only 32.1% were.

Certain cities have been harder hit by this trend than others. In the heart of Silicon Valley, San Jose–Sunnyvale–Santa Clara, CA, has seen its young adult homeownership rate decrease 34.8% — the largest decrease in the country New Haven–Milford follows closely behind, with a 34.5% decrease in young adult homeowners over the past 10 years. In 2006, over 40% of adults 18 to 35 in the Elm City owned homes. In 2015, that percentage was a mere 24.4%.

Of all the MSAs we examined, only two exhibited increases in young adult homeownership from 2005 to 2015. Scranton–Wilkes-Barre–Hazleton, PA, saw a 12.1% increase, and Buffalo–Cheektowaga–Niagara Falls, NY, experienced a 3.8% bump. Every other city saw losses.

Are Millennial Homeowners Keeping up with the Boomer and Gen X Joneses? 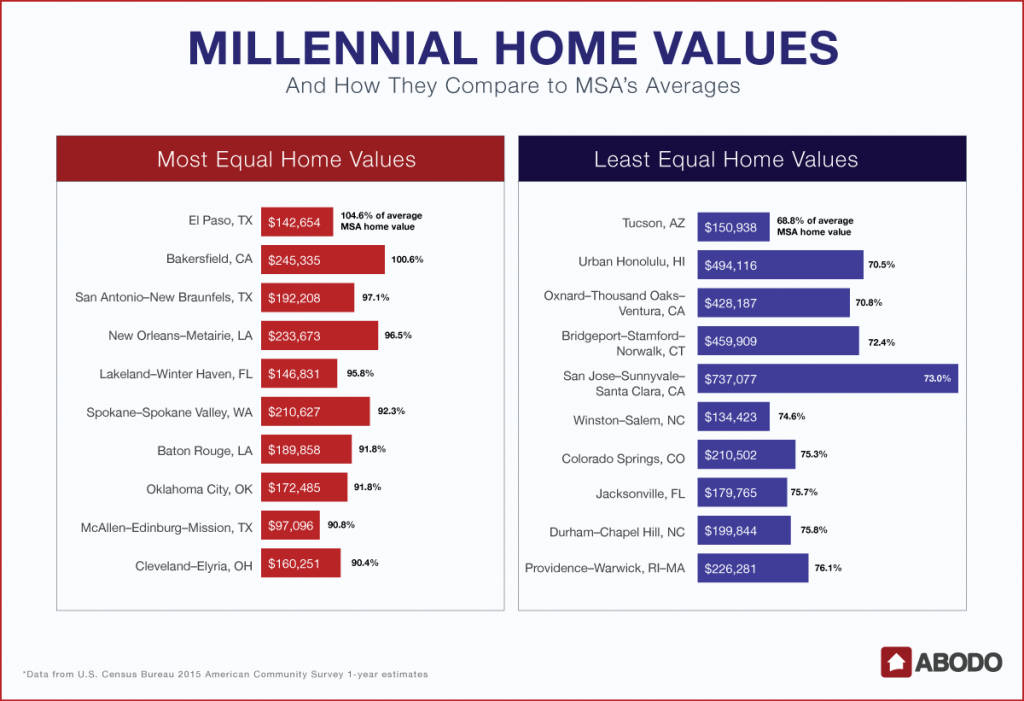 Maybe so many Millennials are buying homes in the South and Midwest because they want bang for their buck: Eight of the 10 MSAs with relatively equitable home values for Millennials are located there. Texas scores particularly well. In El Paso, the Millennial average home value is $142,654, which is 104.6% of the MSA’s average value. San Antonio–New Braunfels (97.1%) and McAllen–Edinburg–Mission (90.8%) also show Millennial home values that are nearly equal to the area average.

The only two cities outside the South and Midwest on the list are Spokane–Spokane Valley, WA (92.3%), and Bakersfield, CA (100.6%), which is the only MSA other than El Paso where Millennial home values actually exceed the area average.

Many of the MSAs with the greatest disparity between Millennial home value and the area average are unsurprising. Only 18.3% of Millennials in Urban Honolulu, HI, own homes, and even though the average value of those homes is $494,116, that’s still only 70.5% of the area average. Oxnard–Thousand Oaks–Ventura, CA (70.8%); Bridgeport–Stamford–Norwalk, CT (72.4%); and San Jose–Sunnyvale–Santa Clara, CA (73%), all have sky-high property values and average home prices that are above $400,000. In San Jose–Sunnyvale–Santa Clara, the average home is valued at just over $1 million. Even high earners in Silicon Valley might have trouble paying $737,077, the average Millennial home value in the area.

It Could Take Millennials Decades to Afford a Down Payment

Buying a house is not a spur-of-the-moment decision. There’s a lot of market research, a lot of tours, and a lot of saving (even small saving adjustments to your Amazon shopping habits can be a huge help). Most Millennial homeowners are first-time buyers, so it makes sense that the homes they purchase are often cheaper — about 78% of the average home price. While that eases the burden somewhat, it can still take many Millennials literal decades to save up for those smaller, cheaper starter homes. With extreme home prices all across the nation, many Millennials may start to seek alternative financing methods, such as a contract for deed in (widely popular in Minnesota) or additional creative home financing methods.

If we imagine that Millennials can squirrel away 15% of their rent-bearing incomes per year, the average save-up time is 15.6 years toward a $278,337 house. But in many places, it’s much longer than that. 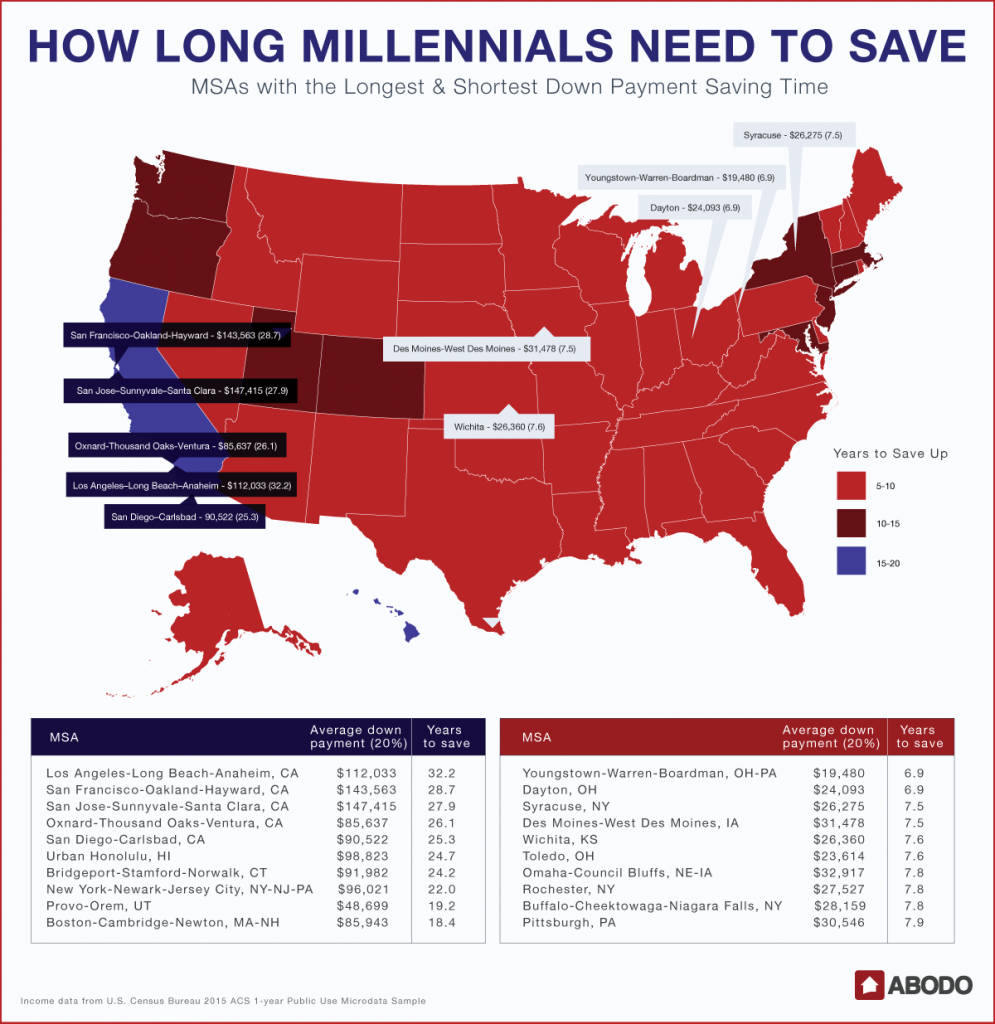 Los Angeles–Long Beach–Anaheim, long deemed one of the most expensive places to live in the country, tops our list: Median-earning Millennials saving 15% there would need to save up for 32.2 years to afford a 20% down payment of $112,033. As tall an order as that is, Los Angeles isn’t even the MSA with the highest down payment. That honor falls to San Jose–Sunnyvale–Santa Clara, with a down payment of $147,415. Somewhat higher salaries in the Bay Area translate to a (negligibly) shorter saving period than Los Angeles, at 27.9 years. San Francisco–Oakland–Hayward barely trails San Jose, at $143,563 and 28.7 years.

You might have noticed a pattern here: Aren’t those all California cities? The Golden State actually accounts for five out of our 10 MSAs with the longest saving time. Oxnard–Thousand Oaks–Ventura ($85,637, 26.1 years) and San Diego–Carlsbad ($90,522, 25.3) also make the list.

Provo-Orem is a bit out of place on our top 10 list, with a down payment that comes in at nearly  half of any other MSA on the list. Still, lower Millennial incomes in the area mean 19.2 years of saving.

For the 80% of Millennials who plan to someday own a home, perhaps foregoing rent payments for faster savings and parental roommates is the better option. Saving more than 15% can speed this process quite a bit.

Young adults used to account for a much larger portion of homeowners than they do today — the prevalence of college, mounting student loan debt, and an increasingly tight housing market are slowly pushing back the age of first-time homebuyers. The percentage of owners between the ages of 18 and 35 has been sloping downward nationally for more than 10 years, and only two MSAs saw a positive change in the number of young adult owners between 2005 and 2015.

Yet, some Millennials — particularly those in areas with low housing costs — manage to save up and take the plunge, though often for less expensive homes and the homeowners insurance coverage that follows. All told, Millennials still account for just 7.5% of the value of all U.S. homes, despite being the largest generation of adults.

Although shy — or financially unable — to begin purchasing homes until recently, Millennials have accounted for the largest share of new home purchases in recent months. Only time will tell whether the trend will hold, but it’s safe to say it will be an expensive endeavor in an already tight housing market with a shortage of affordable starter-homes.

We analyzed data from the U.S. Census Bureau 2015 American Community Survey, 1-year estimates on tenure by age of householder to find the MSAs with the highest and lowest percentage of all householders who are owners. We restricted our analysis to the 100 largest MSAs by population. We then used the ACS 1-year estimates for each year between 2005 and 2015 to calculate the percent change  of Millennial homeowners who own their home in each MSA.

To analyze median income of Millennials for each MSA, we used the 2015 ACS 1-year Public Use Microdata Sample. Because the PUMS uses only Public Use Microdata Areas (PUMAs) as the geographic identifier for each record, we used the IPUMS MSA-PUMA crosswalk tables to assign each PUMA to the MSA in which it lies. Occasionally a PUMA intersects multiple MSAs, so we only included a PUMA in an MSA if at least 50% of the PUMA population lives within the MSA. We then used the design factor method provided in the PUMS documentation to calculate estimates of the median income of all employed Millennials in each MSA.

We estimated the number of years it would take a Millennial to save up for a down payment in each MSA by dividing 20% of the average Millennial-owned home value by 15% of the Millennial median income.

The bulk of our above study was based on data for the 100 largest MSAs, but Millennials are buying homes in cities of all sizes. To reflect those homebuyers, too, we’ve collected and analyzed data about the portion of Millennial homeowners, home values, and years to save up for 37 more MSAs and grouped them with their peers.