Millennials living at home — we’ve heard this before.

Millennials are breaking a lot of records: According a report from the Council of Economic Advisers, Millennials are the largest generation in the U.S., comprising about one-third of the population; the most diverse generation; and the most educated generation, with more than 60% of adult Millennials having attended college.

But Millennials are also setting a less-positive record when it comes to housing: This generation of 18- to 34-year-olds is more likely to be living with their parents than to be in any other living situation — such as cohabitation with a spouse or significant other, or living alone or with roommates — for the first time in more than 130 years.

Rentable’s analysis of U.S. Census data found that 34.1% of Millennials living at home nationwide. But why? To find out, we’ve taken a closer look at the 16 Metropolitan Statistical Areas (with a population of at least 1 million) that exceed the national average — some of which have nearly 45% still living with parents — to see who those Millennials are, and what is keeping them in the nest.

MSAs WITH THE MOST MILLENNIALS LIVING AT HOME 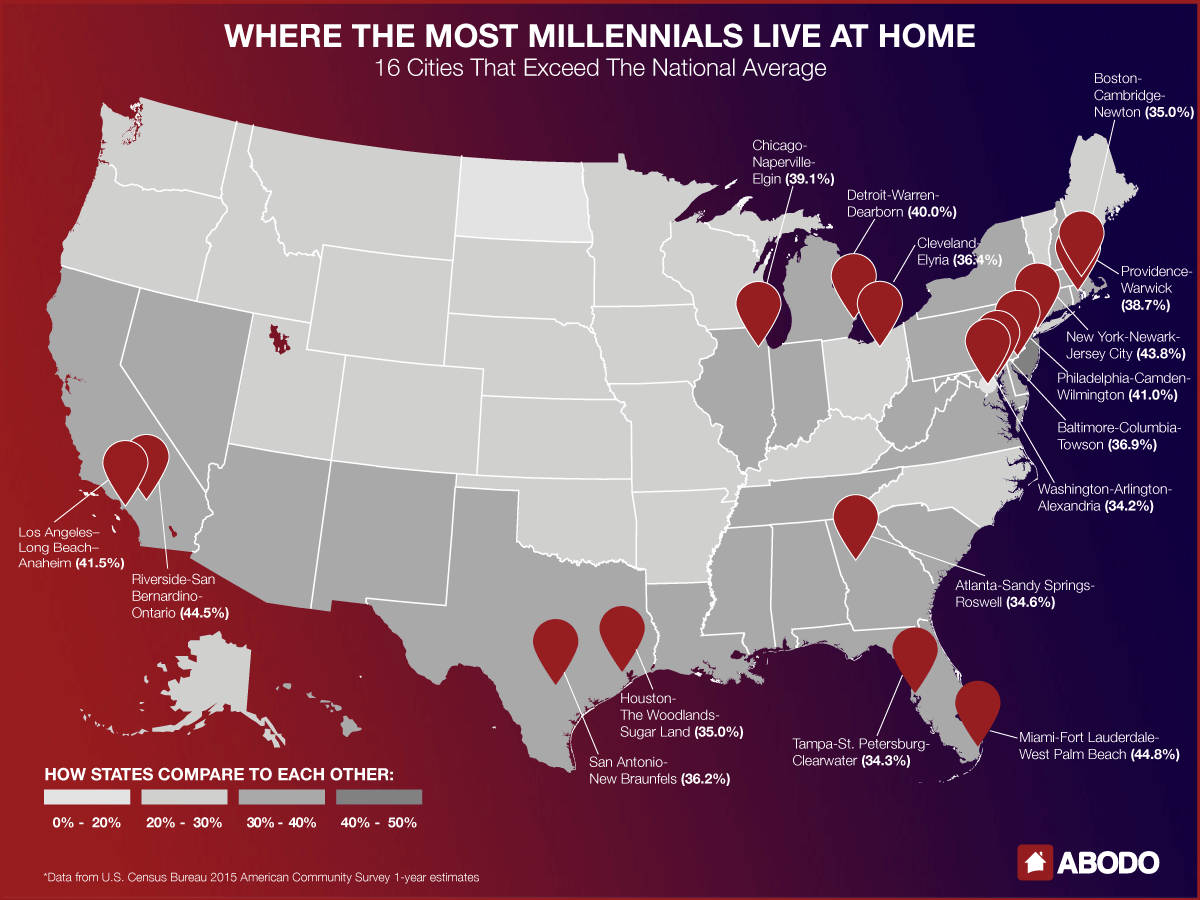 The 16 MSAs with the highest percentage of Millennials living at home are scattered all across the country. Number one is Miami-Fort Lauderdale-West Palm Beach, FL, where a whopping 44.8% of 18- to 34-year-olds live with their parents. Close behind are Riverside-San Bernardino-Ontario, CA, at 44.5%, and New York-Newark-Jersey City, at 43.8%. All three MSAs are located in states with a higher than average percentage of Millennials living at home. Miami-Fort-Lauderdale-West Palm Beach and Riverside-San Bernardino-Ontario each exceed their state’s percentages of 37.9% and 38.4%, respectively. New York-Newark-Jersey City’s percentage exceeds the New York state average (39.6%) but is actually below New Jersey’s state figure of 45.8%, which is the highest state figure by a wide margin of about 6 percentage points.

Several states are represented twice: In addition to Riverside-San-Bernardino, Los Angeles-Long Beach-Anaheim also represents California, with 41.5% of Millennials living at home. Besides Miami-Fort Lauderdale-West Palm Beach, Florida’s Tampa-St. Petersburg-Clearwater comes in with 34.3% of Millennials living at home — lower than the state average, but still higher than the national figure. Texas is represented by San Antonio-New Braunfels — a city with awesome apartments found here — (36.2%) and Houston-The Woodlands-Sugarland (35%).

A number of cities along the I-95 corridor have high percentages, as well. Philadelphia-Camden-Wilmington (41%), Baltimore-Columbia-Towson (36.9%), and Washington-Arlington-Alexandria (34.2%) have higher-than-average percentages. Aside from Washington, DC — which at 15.1% has one of the lowest percentages of Millennials living at home in the country — all of these East Coast MSAs are in line with their state percentages.

Of all Millennials living at home, most (54%) are male, even though men represent just 50% of the Millennial population. And the ages mainly break down as you’d expect: 41% are 18 to 21 years old and haven’t had much time or income to make the move into their own space. 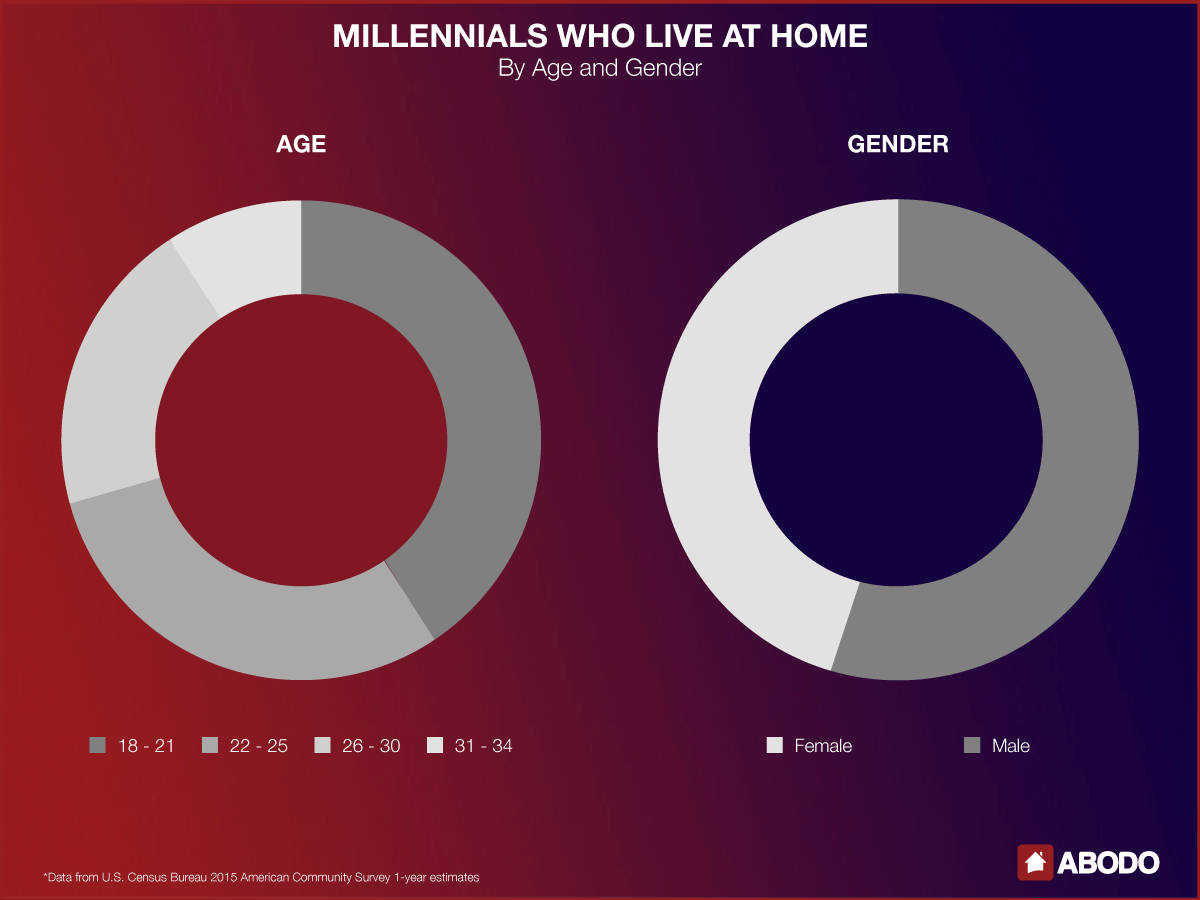 Naturally, the next-youngest group, ages 22 to 25, is the next most likely to be living at home, comprising 29.8% of Millennials living with parents. What’s a bit more surprising is that nearly 30% are Millennials age 26 or older, a third of whom are between ages 31 and 34.

Those age 26 and older would be at least eight years out of high school, but — if they’re among the majority who chose to pursue higher education — would be only about two years beyond a four-year degree, which actually take an average of six years to complete. 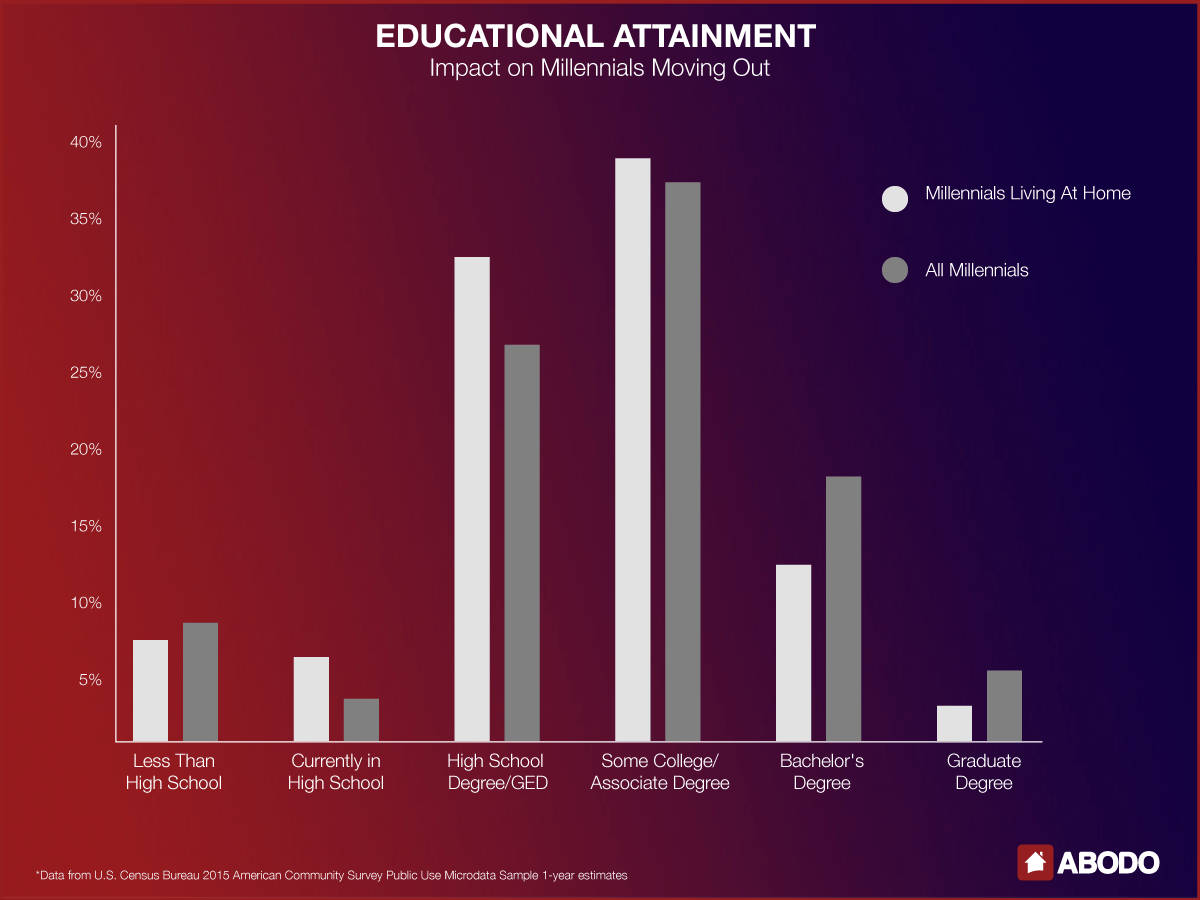 One might expect an inverse relationship between educational attainment and the choice to live at home. But the reality is more complicated.

In fact, the percentage of Millennials living at home who only have a high school degree — 32.4% — is lower than the 38.9% of Millennials living at home who have an associate degree, have attended some college, or are currently in college. And both of those figures exceed the percentage of all Millennials — regardless of home situation — with similar educational credentials. In the case of a high school degree or GED, the difference is notable: almost 6%.

It’s hard to pay rent if you can’t find work. But even if you do have stable employment, is renting a feasible possibility? In the 16 cities we examined, the answer is: not very. 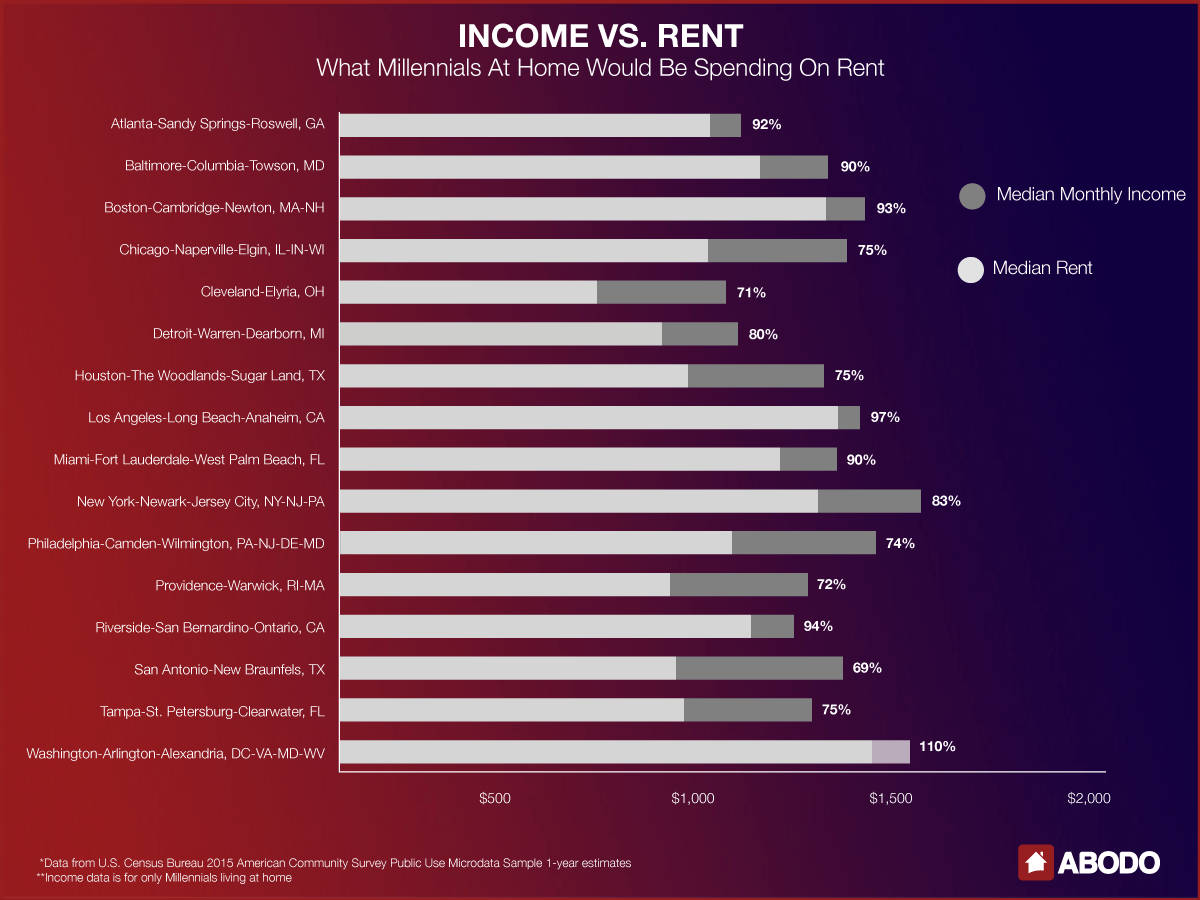 Of the 16 cities where the percentage of Millennials who live at home is higher than the national figure, Cleveland has by far the lowest median rent. Nationally speaking, $746 per month isn’t outlandish. But the unemployment rate for Millennials living at home in Cleveland is 11.9%. And even if that Millennial living at home has a job or an online job, the median rent would account for 71% of his or her income.

Millennials — the largest, most educated generation in history — are increasingly living with parents in lieu of striking out on their own. They already account for the majority of the workforce, they’re expected to comprise 75% of it by 2030. So why is this economically powerful generation choosing to stay home?

The problem isn’t just high rent, or just lack of education, or just unemployment, or just low pay. Often, it’s a combination. Millennials are not only earning less than their parents did as young adults, but the majority of Millennials who pursue post-secondary education also graduate saddled with an average student loan debt hovering around $30,000.

Additionally, wages aren’t increasing at the same rate as rents. In all of the cities we examined — MSAs with more than 1 million residents — Millennials living at home earned a median monthly income of $1,121 — nearly $1,000 less than the median monthly income of all Millennials, which was $2,023. Do they earn less because they don’t need to be paying rent? Or are they staying with parents because median rents account for nearly their entire paycheck?

For many of these 18- to 34-year-olds, living with parents isn’t simply a lifestyle choice, but a necessity brought on by high rent prices and relatively low incomes. It’s not hard to see why moving out isn’t an attractive possibility.

We used the U.S. Census Bureau’s American Community Survey (ACS) 2015 1-year estimates to find the percentage of 18- to 34-year-olds living with their parents in the United States as well as in each Metropolitan Statistical Area (MSA) with a population of at least 1 million.

We analyzed the gender, age breakdown, and educational attainment of Millennials on a national level using the ACS 2015 1-year Public Use Microdata Sample (PUMS). Each record in the PUMS carries a person weight and a household weight indicating the number of people the record represents. More information on how the weights are assigned can be found in the PUMS documentation.

To analyze median income and unemployment rate of Millennials living at home for each MSA, we again used the 2015 PUMS. Since the PUMS uses only Public Use Microdata Areas (PUMAs) as the geographic identifier for each record, we used the IPUMS MSA-PUMA crosswalk tables to assign each PUMA to the MSA within which it lies. Occasionally a PUMA intersects multiple MSAs, so we only included a PUMA in an MSA if at least 50% of the PUMA population lives within the MSA. The 16 MSAs we profiled in our article comprise 736 PUMAs in total. This elimination process dropped 20 PUMAs from the analysis and retained 13 PUMAs that do not have 100% of their population within a single MSA.

After the subset of records corresponding to each MSA had been defined, we calculated unemployment percentages for each MSA in the same way we calculated nationwide percentages. To calculate median income, we created weighted frequency distributions for the inflation-adjusted wage of employed Millennials living at home in each MSA. We then used the design factor method provided in the PUMS documentation to calculate estimates of the medians. We repeated this process using the subset of all employed Millennials. Median rent prices are for the MSA as a whole and are taken from the ACS 2015 1-year estimates.