In February we reported insignificant apartment rent gains and that tepid trend reversed in March — at least in one-bedroom units.

Median one-bedroom apartment rents fell one dollar to $1,089 in March taking the yearly increase down to a paltry 0.28 percent. Two-bedroom units were up to five bucks to $1,353, moving the two-bedroom yearly increase to 0.52 percent.

Indicative of a contracting rental landscape, both one-bedroom and two-bedroom top-ten winners and losers reported increases or decreases in a very narrow range.

No city claimed an increase or decrease of greater than 5.5 percent. This is significant because the double-digit moves we usually see were absent in March.

The most expensive place to live on this list was Houston, TX at $1,149. The least expensive was previously mentioned Toledo, OH at a median $583. 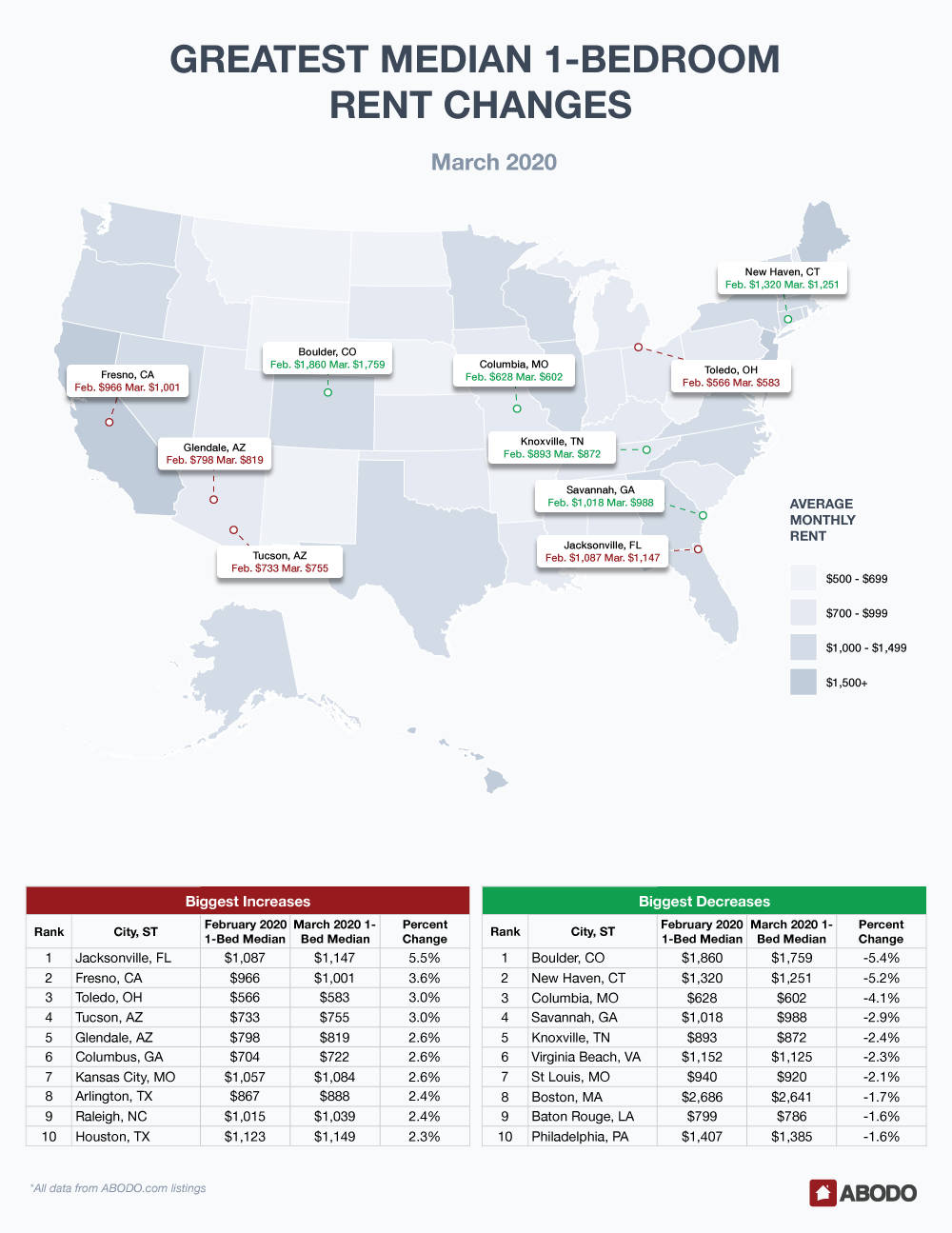 Boston, MA — not often seen on our charts — fell a non-exciting 1.7 percent to a formidable median $2,641 rent. Baton Rouge, LA and Philadelphia, PA both reported a loss of 1.6 percent as they rounded out our top ten downward movers.

Expensive Boston, MA was the priciest place to live, and Columbus, MO was the cheapest at the previously mentioned median rent of $602.

Like our one-bedroom cousins, double-digit March moves were conspicuously absent and no city on either two-bedroom list moved more than 5.6 percent in either direction.

Jacksonville, FL topped the winners with a 5.6 percent gain to a median $1,273. Rock n’ Roll Hall of Fame home Cleveland, OH rose 5.4 percent to take second place on our list. Syracuse, NY came in third at $944 — a rise of 4.9 percent, and Bakersfield, CA reported a 4.7 percent gain.

Santa Ana boasts nice weather but also the highest median rent on our top ten gainer list at $2,324. Columbus, GA was the most affordable at a very reasonable $812. 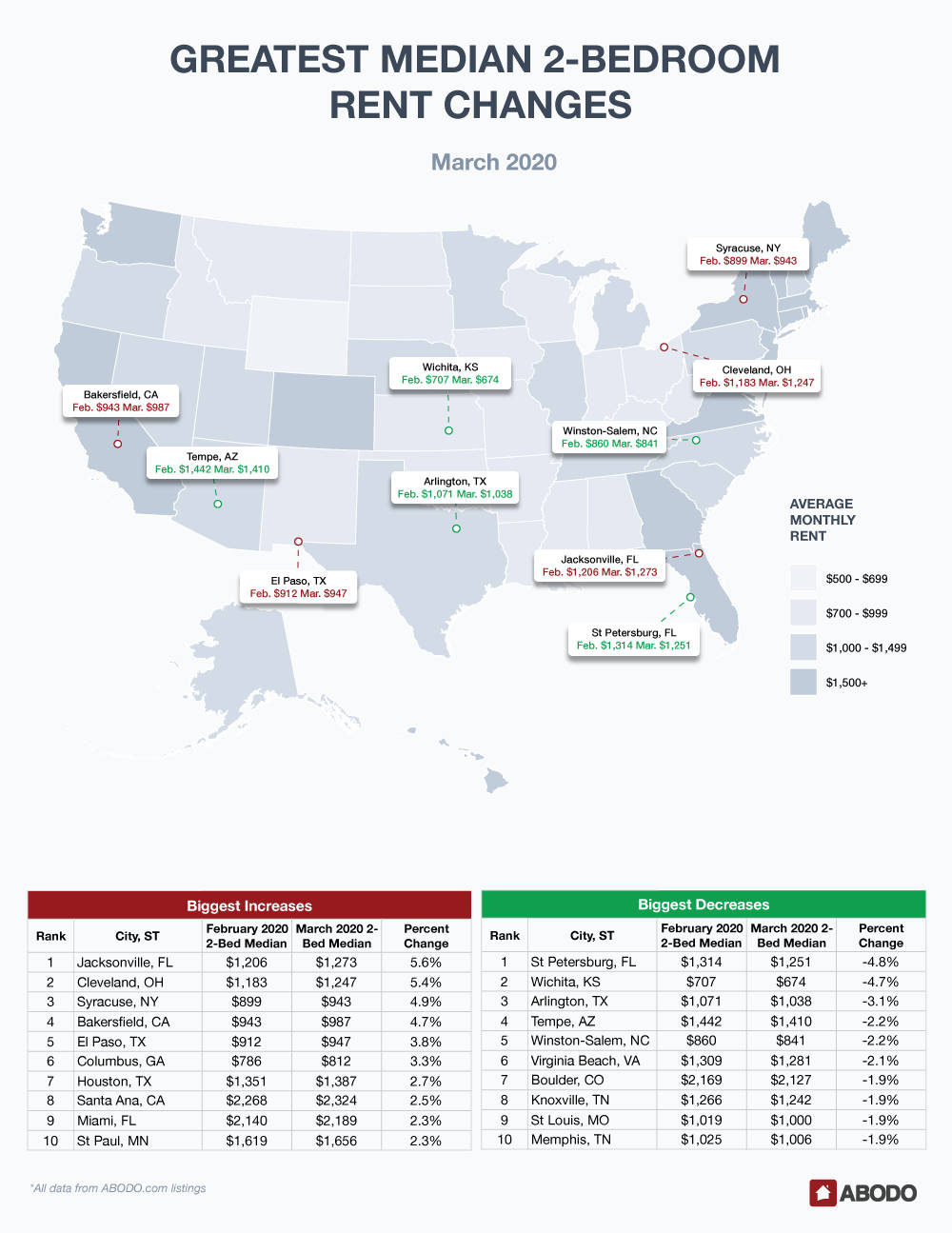 Our biggest decreasers were very tightly packed in a range form 4.8 to 1.9 percent. Leading the list was St. Petersburg, FL falling 4.8 percent to a median rent of $1,251. Wichita, KS was right behind losing 4.7 percent to $674. Arlington, TX was alone in third place as it fell 3.1 percent.

Then, Tempe, AZ, Winston-Salem, NC and Virginia Beach, VA all fell by either 2.1 or 2.2 percent. Finally, in stats we haven’t seen in over a year, Boulder, CO, Knoxville, TN, St Louis, MO and Memphis, TN all fell an identical 1.9 percent. Of these, St Louis, MO was the least expensive at $1,000.

Overall, Wichita, KS won the prize for the cheapest rent on our top ten two-bedroom losers list at a median $674 while Boulder, CO was unsurprisingly the priciest at $2,127.

As of February 29, 2020, some experts are frankly concerned about a global recession.

The coronavirus seems to be rapidly moving to the pandemic stage. Stock markets have been historically roiled, and the price of West Texas Crude is heading to the $45 per bbl. mark or below.

Supply chain shortages, panic buying and the specter of vast segments of the population in either mandated or voluntary quarantine could quickly throw the economy into the recession that many have feared. A true and prolonged recession could halt new apartment projects and that could actually stabilize rent prices.

On the other hand, historically low mortgage interest rates could drive some persons into home purchases and out of leased units. We’re living in interesting times, to say the least, so be sure to look for next month’s report.

Be sure to tune in next month.