We left last month expecting moderate increases, and our March statistics show that we are in the upper ranges of what we would call a moderate upward median rent trend. Let’s get into the details. 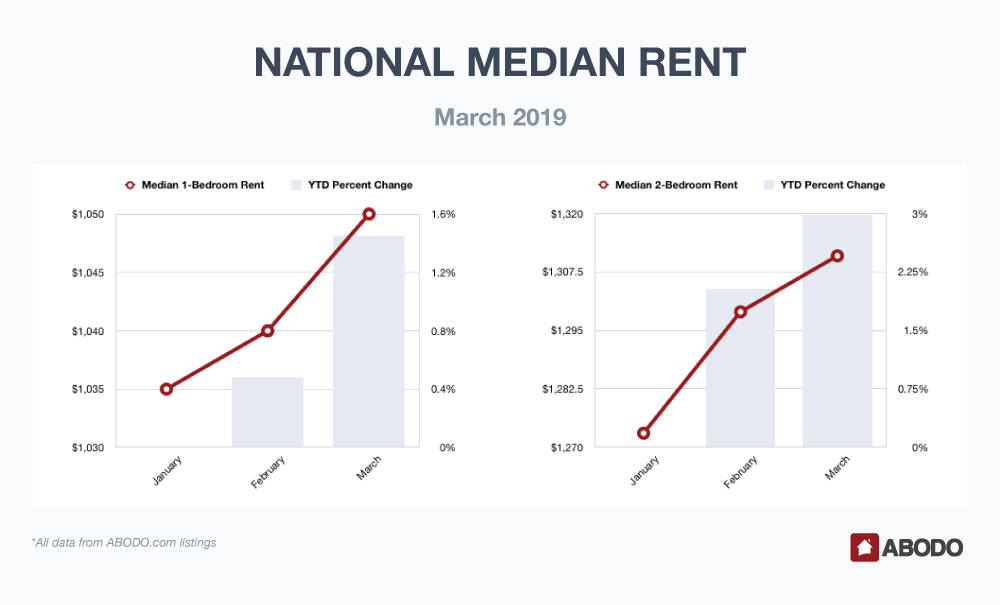 Little Rock, AK was the big winner in March with a significant 13.6 percent gain to a median price of $685. Grand Rapids, MI and Columbus, OH placed second and third on our top ten gainer list with increases of 9.6 and 9.0 percent respectively.

Mesa AZ, and Columbus, GA ranked fourth and fifth with 7.3 to 7.7 percent increases. Detroit, MI and Dallas, TX were tied for sixth position with 6.2 percent increases. Note, however, that the median one- bedroom rent in Detroit is about half of Dallas’ $1,192.

In the 5.2 to 5.7 percent range were Wilmington, NC, Charlotte, NC and Oakland, CA. Wilmington is the most affordable of these three cities with a median one bedroom rent of $947. 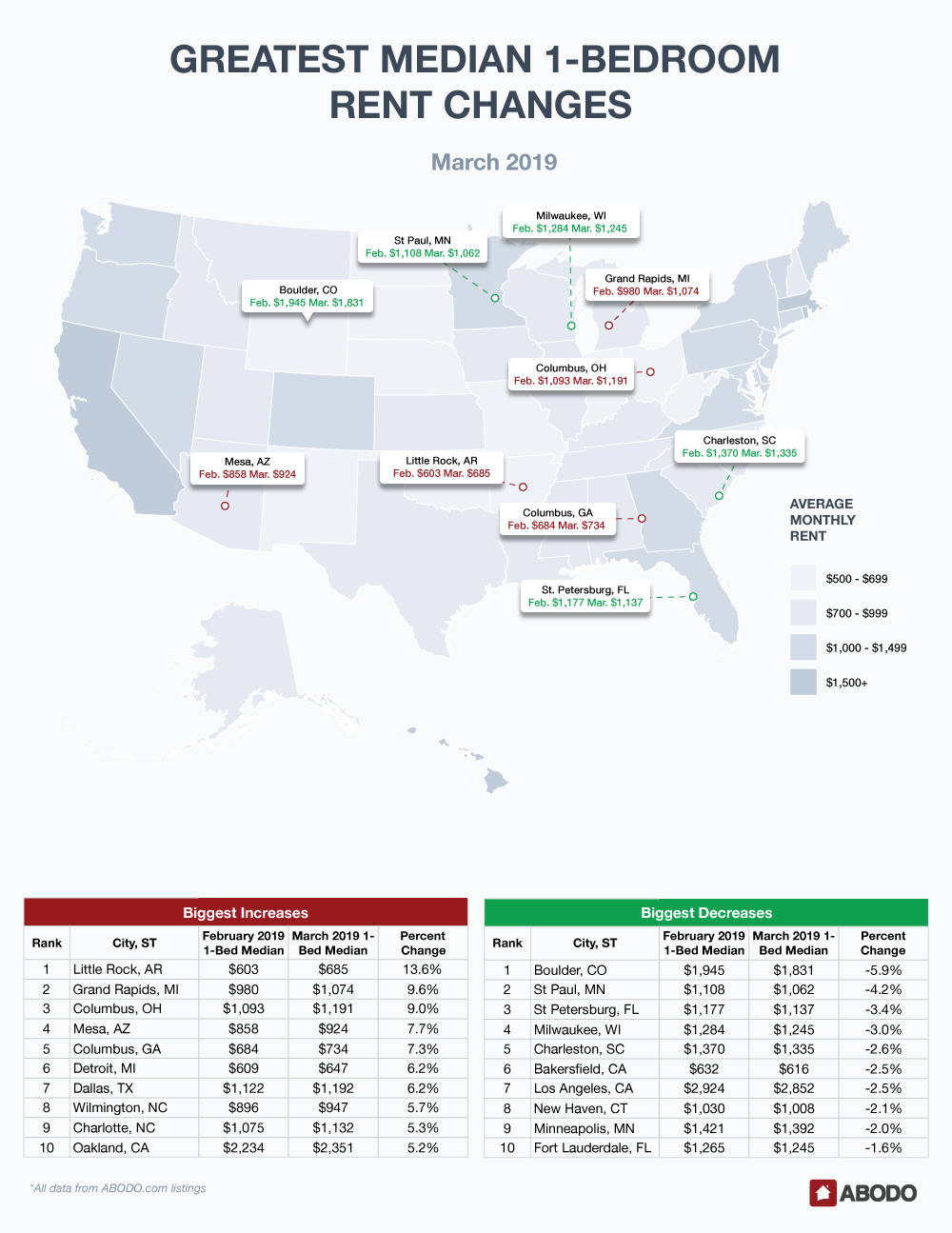 As we sometimes see, the losers were much more tightly bunched than the gainers. Boulder, CO lost 5.9 percent to lead the decreasers, and frigid St. Paul, MN was second with a 4.2 percent decline.

St. Petersburg FL lost 3.4 percent, and recent gainer Milwaukee, WI appeared on our loser list for March with a 3.0 percent decrease to a median $1,245.

Charleston SC, Bakersfield, CA and Los Angeles, CA all reported similar decreases of 2.5 to 2.6 percent. Of these, Buck Owen’s Bakersfield, CA was definitely the cheapest one-bedroom on the decliner list with a low median rent of only $616.

In the number ten spot, Fort Lauderdale, FL reported a small 1.6 percent decline to a median $1,245.

Mesa, AZ led the increasers with an 8.4 percent median gain to $1,146. Not far behind was Wilmington, NC with a 7.2 percent gain to $1,154. Jacksonville, FL was still hot with a rise of 6.9 percent, and number four on our gainers list, Springfield, MO rose 5.9 percent. Note that Springfield’s extremely modest $660 two-bedroom median rent, however, is amazingly low. 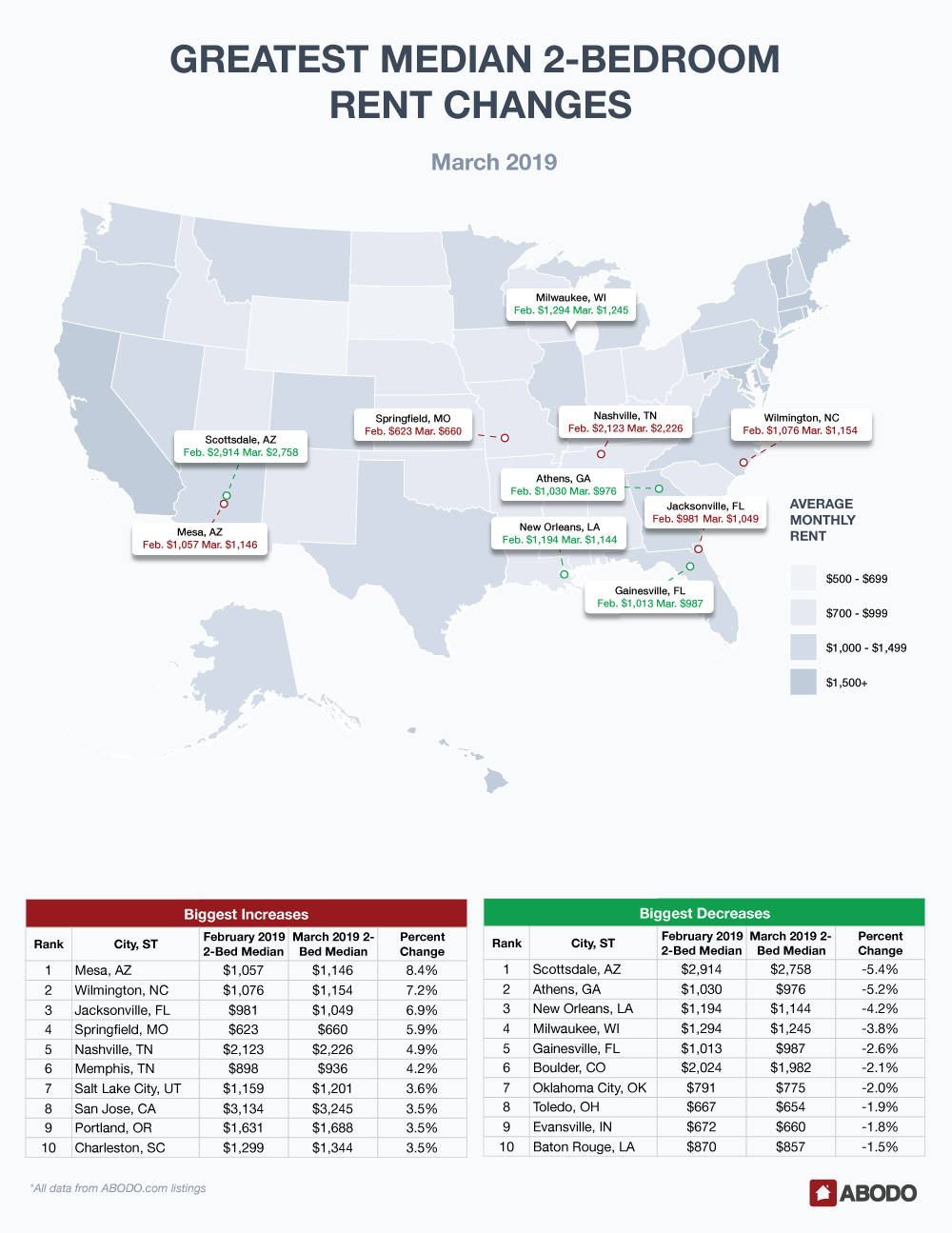 Like our one-bedrooms, losers posted less exciting results with Scottsdale, AZ and Athens, GA declining 5.4 and 5.2 percent respectively. New Orleans, LA took third place in the loser’s column with a decrease of 4.2 percent to a nationally affordable $1,144, and Milwaukee, WI two -bedrooms, like the one-bedrooms, reversed their upward trend of late as they lost 3.8 percent.

Balmy Gainesville FL lost 2.6 percent to $987 and Boulder, CO, Oklahoma City, OK, Toledo, OH and Evansville, IN lost from 1.8 to 2.1 percent. Of these cities, Evansville is the best bargain at a median $660.

We still cautiously predict only moderate rent increases for the first half of 2019. We were a bit more pessimistic about the economy in December as we watched oil prices crash and the stock market correct. Then we saw the Fed slow interest rate increases this first quarter, and that seems to have calmed the stock market.

With oil prices off their lows but still relatively cheap at around $56 per barrel, that translates to $2.00 per gallon gas in some parts of the country, and that means more expendable income left in consumers’ pockets.

With a stable and consumer-friendly economy taking shape in early 2019, we think that translates into only moderate apartment rental price increases. Stay tuned as things can change rapidly and be sure to check out our April report next month.