As we wrapped up 2018, we concluded that we had seen a less than exciting year with basically flat rent prices. We’ve received fresh February 2019 rent stats, so let’s look at what’s happening now. 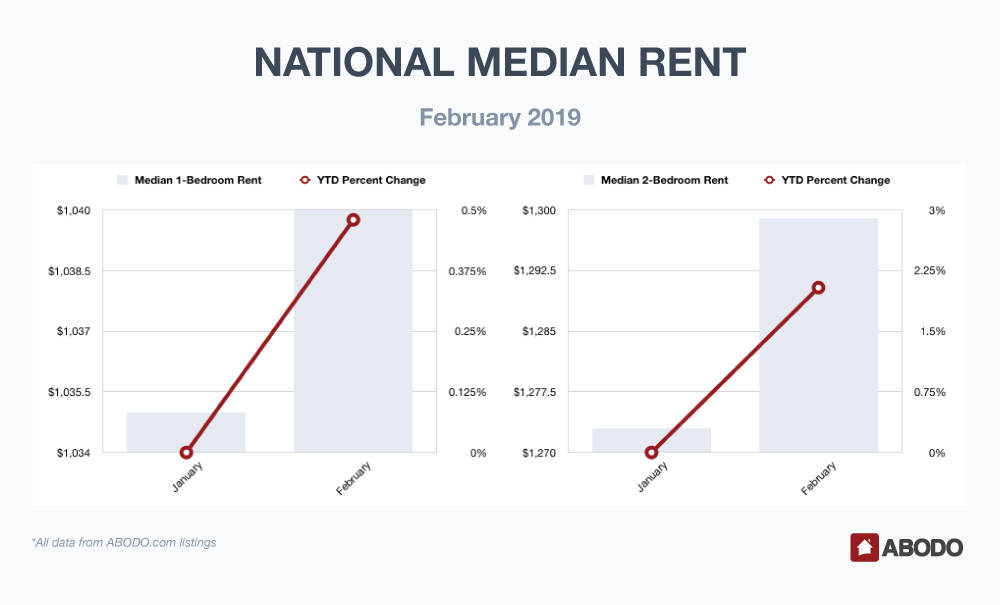 In February, both median one-bedroom and two-bedroom units posted increases. One-bedrooms rose from January’s $1,035 median to $1,040 in February, a .48 percent change.

February showed some healthy gains as Columbus, OH moved 11.9 percent to a still affordable $1093. Savannah, GA was not far behind with a similar 10.8 percent increase to $1,079. Long Beach, CA, Eugene, OR and Oakland, CA reported rises of 9.9, 9.4, and 8.8 percent respectively, and pricey San Jose, CA took the seventh spot with a stout 7.7 percent increase. 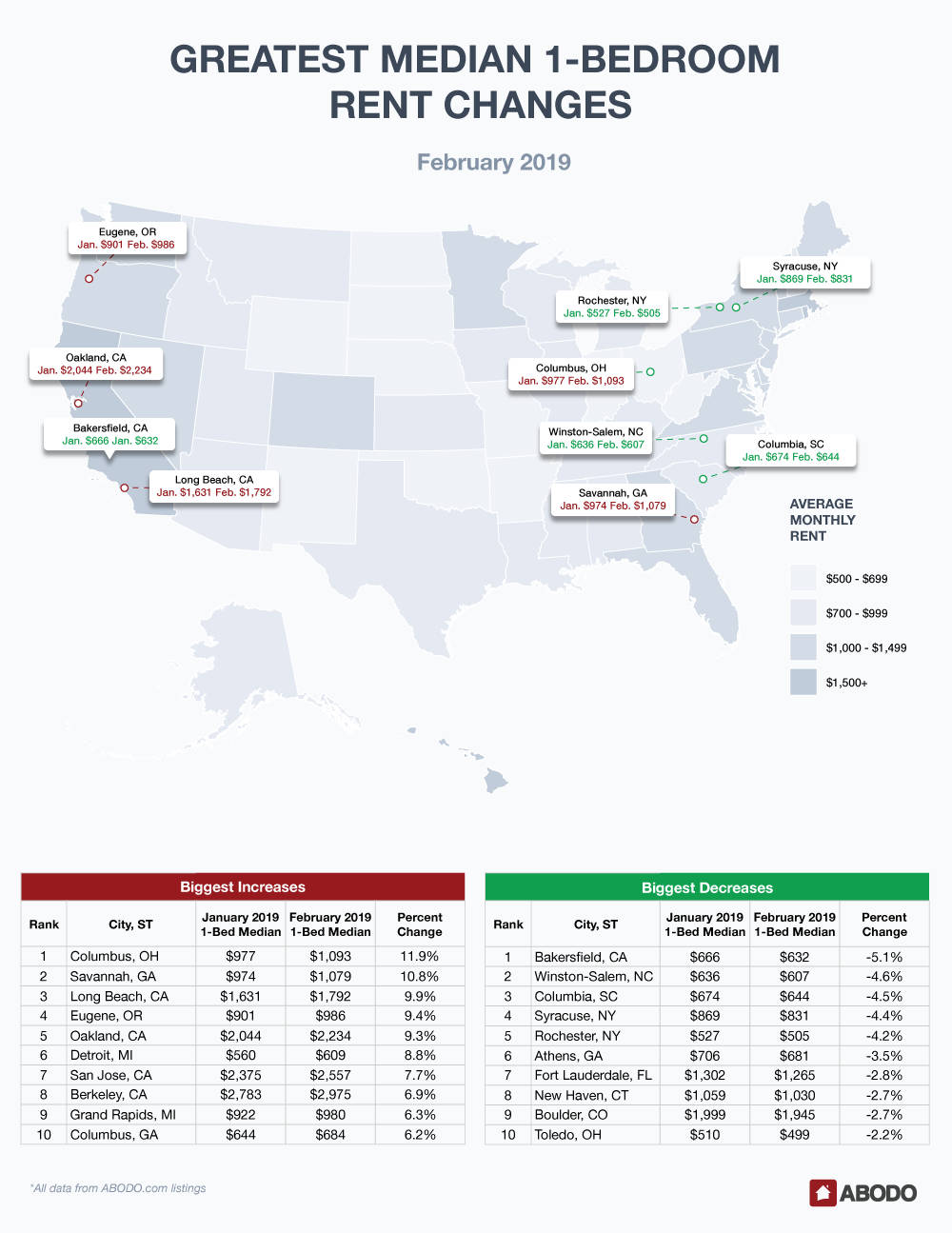 The one-bedroom top ten losers showed a much narrower range as Bakersfield, CA, the home of Buck Owens, reported a loss of 5.1 percent to $632. A one-bedroom can be rented in Winston-Salem, NC for only $607, down 4.6 percent from January’s $636, and Columbia, SC, Syracuse, NY, and Rochester, NY fell between 4.2 and 4.5 percent.

Toledo OH won the prize for the lowest rent on the one-bedroom losers list as that city posted a 2.2 percent loss that took it under $500 to $499. 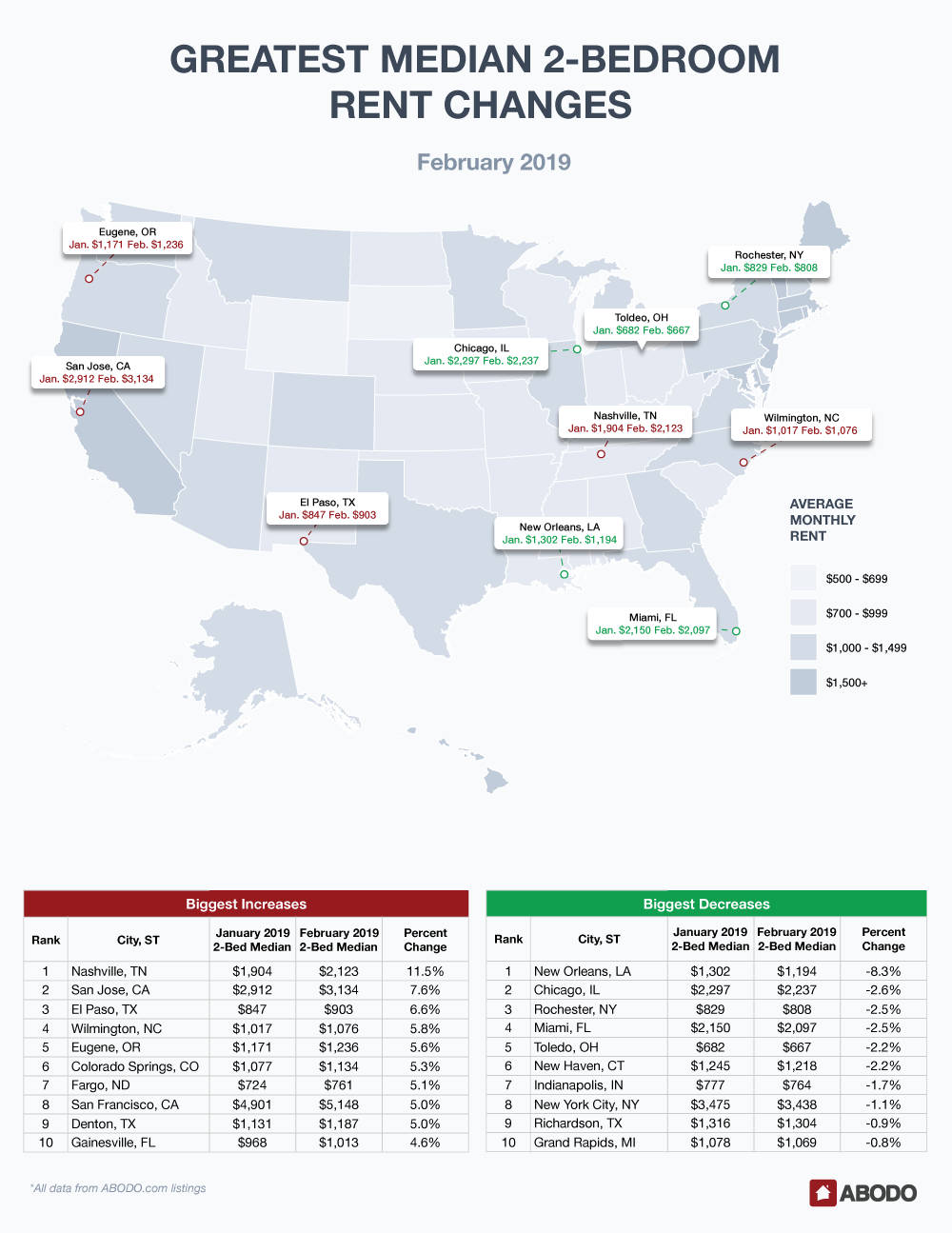 It looks like the NFC Championship game’s bad luck affected the Big Easy’s apartment market as New Orleans, LA led the loser list with a significant two-bedroom median apartment decline of 8.3 percent, down to $1,194 from January’s $1,302.

Providing more evidence that February decreases were generally mild was Richardson, TX, making the top ten list but only falling by .9 percent to $1,304. Grand Rapids MI took the number 10 loser spot, but that city only fell .8 percent to $1,069.

FYI, the most expensive state average rent prices for both one- and two-bedroom units were both claimed by Massachusetts, at $2,525 for a one-bedroom unit, and $2,960 for a two-bedroom apartment.

We still believe that both one- and two-bedroom units will post only modest increases in 2019. Since the stock market has recently recovered somewhat, and mortgage interest rates look steady as they hold around the five percent mark, we feel that if the government can avoid another shutdown and oil prices continue to stabilize, these factors will keep the economy chugging along and therefore produce rent price stability.

In our chaotic political times, however, we know that a ramped-up trade war, an oil price spike or increased geopolitical tensions can all contribute to a recession that many pundits are calling inevitable. We know that economic slowing will arrive one day, but we think it may wait until 2020. Therefore, we again cautiously predict very moderate apartment rent increases for at least the first half of 2019.

Be sure to read our March report next month.