In our February rent report, we brought you news that the five-month streak of rent raises for one-bedroom apartments had finally broken. Going into March, that trend is continued, with median one-bedroom rents around the country down another .8%, to $1,038. Looking back to 2017 rent trends, one-bedroom rents followed the same downward slope in the first three months of the year, before picking up in April as temperatures — and the market — heat up. 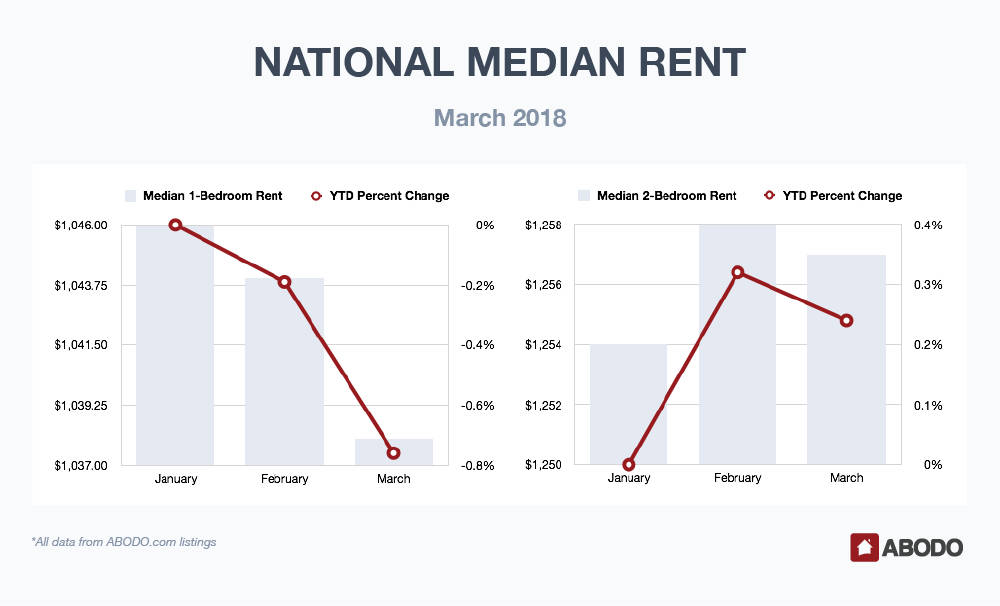 Renters of two-bedroom apartments, however, haven’t fared as well. March marks the seventh consecutive month of higher rents, which are up .2% to a national median of $1,257.

Overall, median one-bedroom rents went down across the country, but Syracuse, NY, saw the greatest decrease nationwide for the second month in a row. Rents in Syracuse dropped 10.6%, from $1,155 to $1,033, between February and March, following a 10.8% drop going into February.

The next highest drop is nearly 5 percentage points behind: Rents in Boulder, CO, are down 5.8% going into March, followed closely by St. Louis, MO, at 5.7%. Eugene, OR, and Reno, NV, both saw one-bedroom rents decline 5%. Minneapolis, MN, which saw the seventh-largest decrease in February, climbs to the #6 spot in March with a decrease of 4.7%. 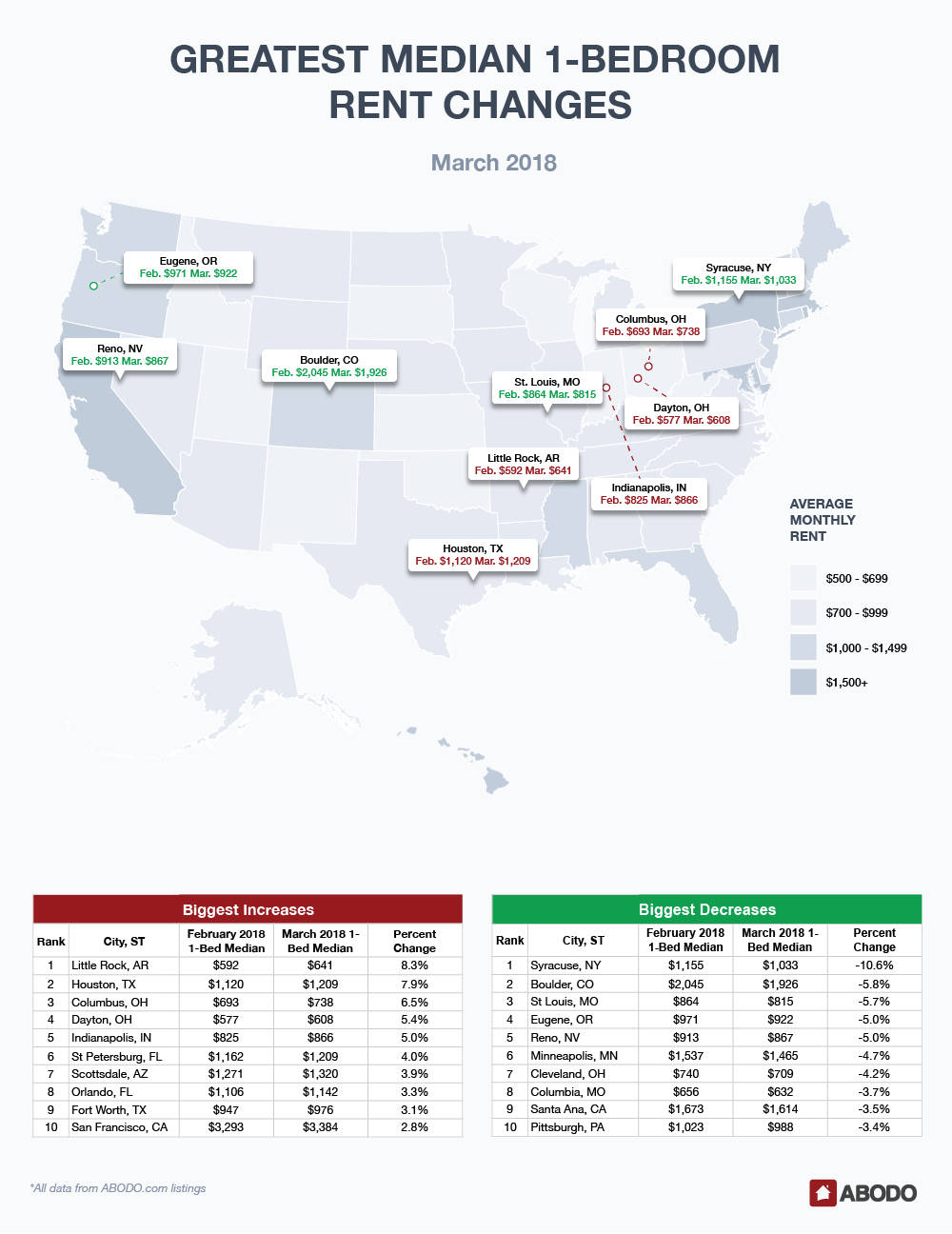 Although one-bedroom decreases won out over increases across the country, many areas still saw significant jumps in rent price. Little Rock, AR, saw the largest, with one-bedroom rents up 8.3%, from $592 to $641. Houston, TX, continuing its recovery from Hurricane Harvey, saw rents rise 7.9%, following a 6% increase in February and 2.2% in January. Fort Worth, TX, also saw rents climb, up just 3.1%, from $947 to $976.

Aside from Columbus, OH; Dayton, OH; and Indianapolis, IN, the top 10 largest one-bedroom rent decreases are mainly in the South and West.

While decreases led the charge for one-bedroom apartments, two-bedrooms had much more significant increases than decreases going into March.

Buffalo, NY, with prices up 10.2%, had the highest two-bedroom rent increase in the country, followed by Houston, TX, at 8.8%. New Orleans, LA; Washington, D.C.; and Berkeley, CA, also saw increases of more than 5%. 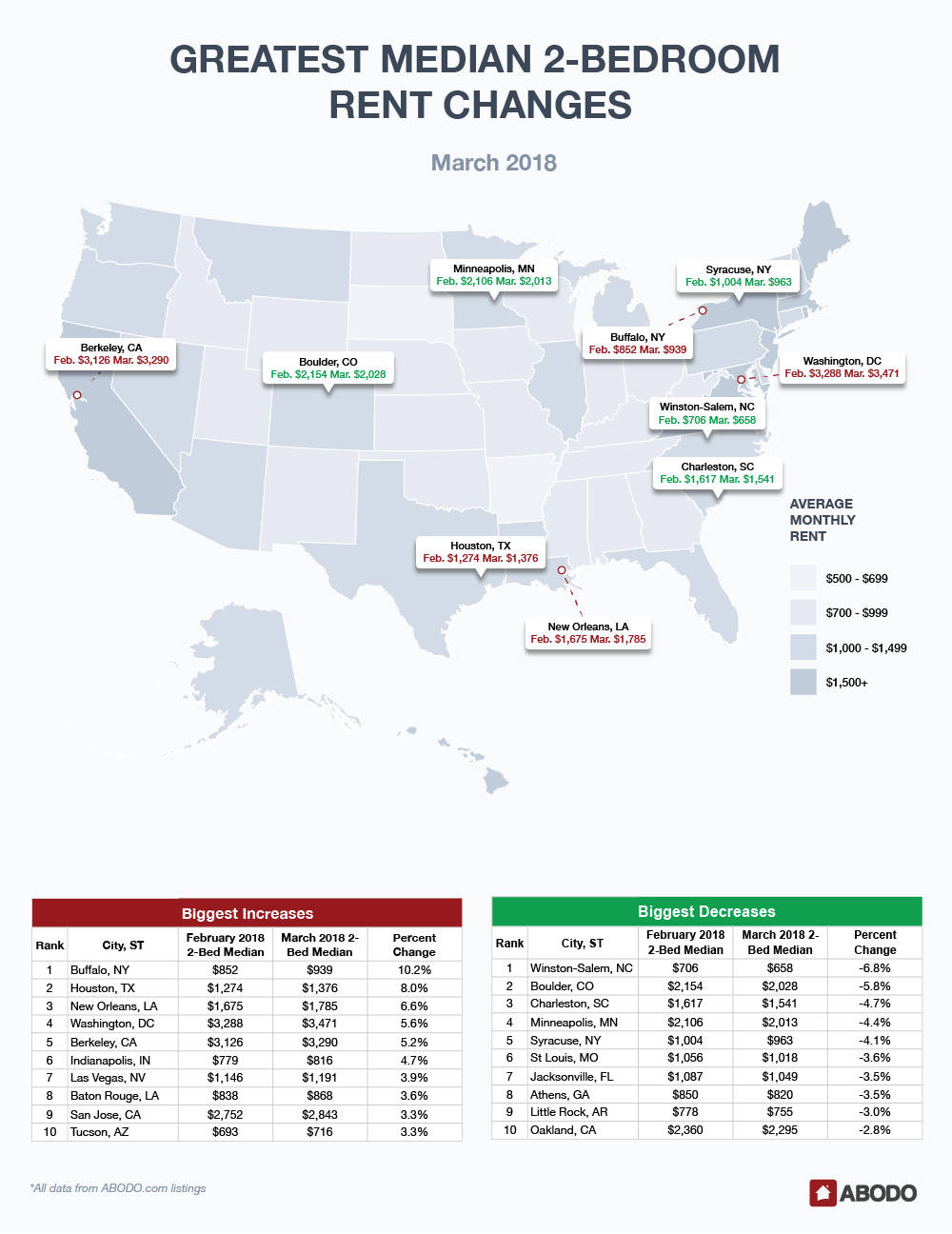 For decreases, Winston-Salem, NC, leads the way for two-bedrooms, with rents down 6.8%. Two-bedrooms in Boulder, CO; Minneapolis, MN; Syracuse, NY; and St. Louis, MO, followed the lead of their one-bedroom rent decreases, earning top 10 spots on both lists.

With the exception of Minneapolis, the Midwest largely flies under the radar for notable rent changes going into March. Two-bedroom apartments in Milwaukee, WI, saw rents increase just .4%, and those in nearby Madison, WI, increased even less, at .3%. Even Chicago, IL, saw relatively stable prices, with two-bedroom rents down a mild 1.2%.

Last year, April kicked off rent increases for both one- and two-bedroom apartments that persisted for the majority of the year. In a few more weeks, we will see if 2018 is lining up more of the same.