In November we reported that one-bedroom units showed a healthy increase and that two-bedroom units followed that trend. In December we saw that: 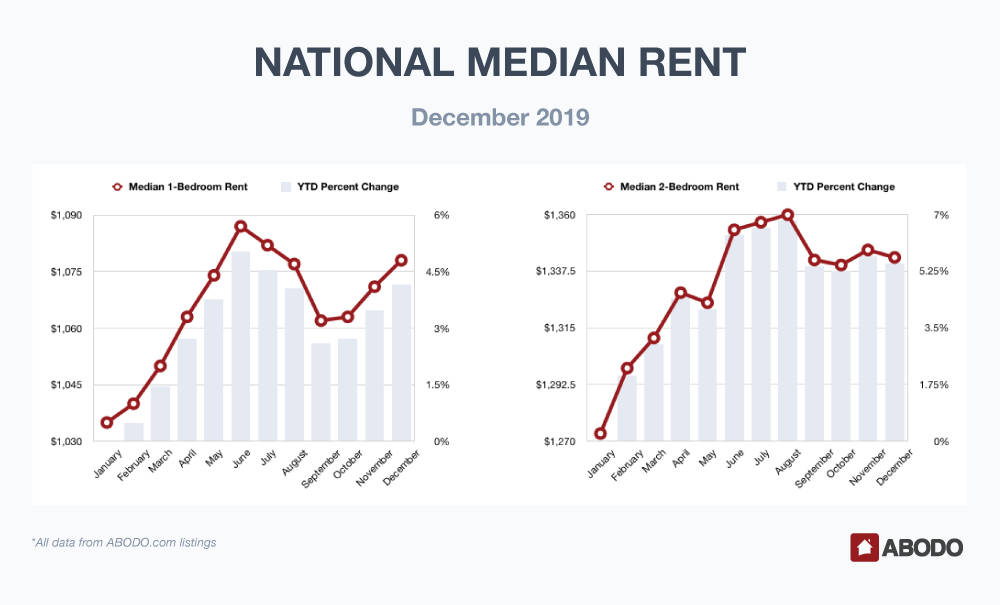 Median one-bedroom apartments added another .67 percent increase in December, settling with a 4.15 percent gain for the year. National median rent increased $7 to $1078, from a January low of $1035.

Something’s happening in Detroit as the Motor City added yet another 12.2 percent increase to its 9.6 percent November gain making its combined two-month rise over 20 percent. A one-bedroom apartment there costs a median $1285—almost doubling Tucson, AZ’s $667, and put Detroit on the top of our gainers’ list.

New Haven, CT came in second place this month with a healthy 11.1 percent rise to a median rent of $1185. Charleston, SC rose 8.5 percent to take the third spot.

Baltimore, MD and Gainesville, FL increased between 7.5 and 7.7 percent, and the aforementioned Tucson, AZ reported a 5.9 percent increase to a still extremely affordable $667.

Two California cities, Oakland and Santa Ana, rose between 5.4 and 5.8 percent with Oakland the pricier location settling at a median $2622. Knoxville, and Cleveland, OH gained 4.9 and 4.7 percent respectively, both staying below the $1000 mark. 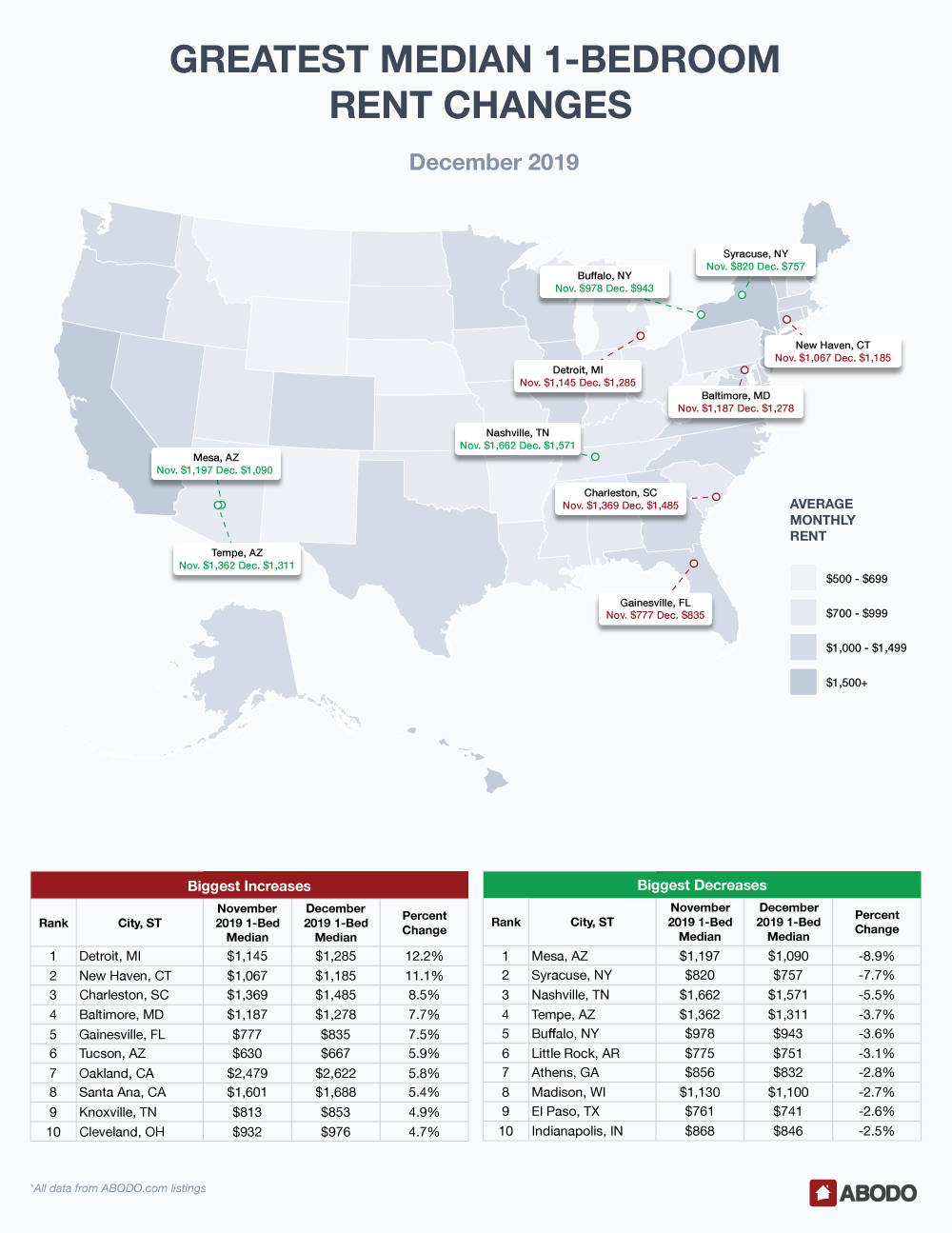 Our top ten losers were somewhat tamer than the top ten winners, as there were no double-digit decreases. That said, Mesa AZ led the losers’ list with an 8.9 percent decline and Syracuse, NY followed with a 7.7 percent loss falling to $757.

Music City, Nashville, TN lost 5.5 percent, and the rest of the December decliners were tightly bunched as Tempe, AZ and Buffalo, NY fell 3.7 and 3.6 percent respectively, and Little Rock, AR declined by 3.1 percent.

Athens, GA, Madison, WI, El Paso, TX and Indianapolis, IN all lost between 2.5 and 2.0. The most expensive city on our top 10 one-bedroom losers’ list was Nashville at a median $1571, and the most reasonably priced was El Paso at $741.

A double-digit median rent increase appeared in December, but losers were tightly bunched in a 2.5 to 6.4 percent range.

Gainesville seemed to be aptly named this month as the median two-bedroom rent there rose a whopping 12.3 percent to $1119. Knoxville, TN came in second on our list with a significant 8.4 percent rise. Oakland, CA followed closely as that city reported an 8.3 percent gain to a lofty $3291. Jacksonville FL, and Richardson, TX both gained 7.0 percent although Richardson’s $1640 median rent dwarfed Jacksonville’s $1036.  Still cheap Tucson, AZ rose 5.0 percent to $896, and cold Buffalo, NY matched that percentage gain albeit with a higher median rent of $1242. 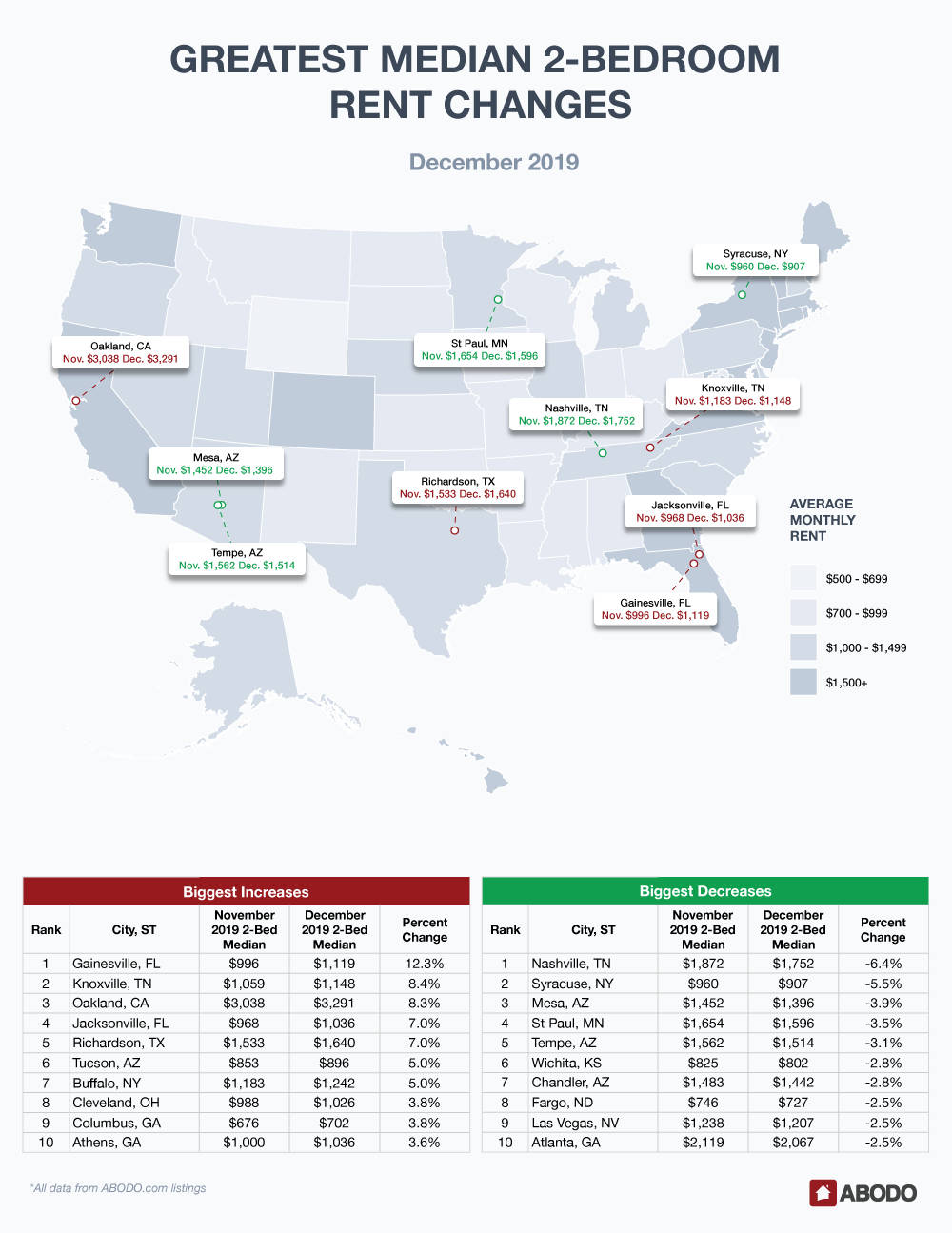 Like its one-bedroom cousin, Nashville, TN fell in December, and claimed the top spot on our two-bedroom losers’ list with a decline of 6.4 percent. Syracuse, NY followed in second place with a 5.5 percent loss to a very affordable $907.

Mesa, AZ was alone in third place reporting a 3.9 percent drop and St Paul, MN was not far behind with a loss of 3.5 percent. Warm Tempe, AZ fell 3.1 percent to a median $1514, and tornado alley inhabitant Wichita, KS and spring training haven Chandler, AZ both fell 2.8 percent. The last three cities on our top ten losers’ list all reported 2.5 percent declines. These cities were Fargo, ND at $727, Las Vegas, NV at $1207, and Atlanta, GA reporting a healthy $2607 median rent.

Most affordable two-bedroom unit on our losers list? That would be Fargo, ND at $727. The priciest was Atlanta, GA at $2067.

Last month we said, “We just don’t see a seismic downward rental price shift,” and we were correct. While two-bedroom units did fall slightly, they are still 5.5 percent higher for the year, and one-bedroom units are close to their yearly highs.

As you know, we look at oil prices as an inflation harbinger, and crude seems locked in a trading range. President Trump is continuing to try to force interest rates lower, and therefore mortgage rates have decreased. More people are staying in their homes longer, unemployment is still low, and until the 2020 election results are in, we just don’t see a recession beginning.

Therefore, it’s status quo for us, and we think rents will continue their mild increase. Again, we just don’t foresee a rental price crash in the next few months, and if increases don’t materialize, we think we may begin a period of mild leveling-off at best.

Tune in next month for our annual review.