The trend we identified last month where decliners were moving more sharply downward than gainers has become less pronounced in both one and two-bedrooms. 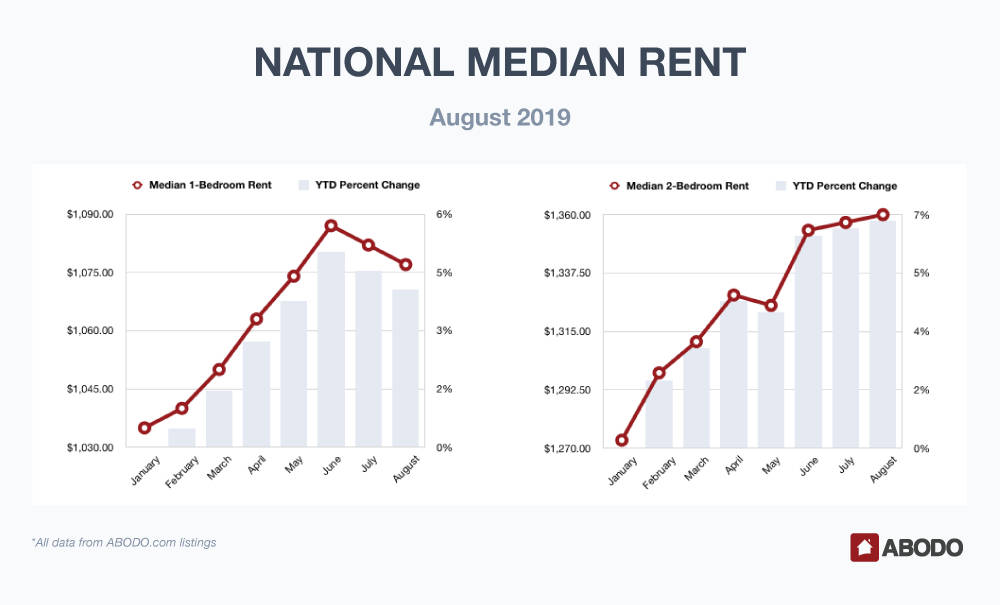 One-bedroom apartments still showed a 4.06 percent YTD rise, but this was down again from 4.54 percent in July and significantly down from June’s 5.02 percent.

August’s top ten gainers chart looked moderate this month with no double-digit increases. Inexpensive Cleveland, OH led the list with an 8.1 percent increase from $802 to $867, followed by Fort Worth TX reporting a 6.6 percent gain to median rent of $1,061. Two very affordable cities on opposite sides of the climate spectrum, El Paso, TX and Green Bay, WI both rose 5.2 percent with Green Bay at $611. Similarly priced Fargo, ND came in fifth with a 4.6 percent rise. Richmond, VA and Salt Lake City, UT gained between 4.1 and 4.4 percent while Athens, GA rose from $832 to $861 — a 3.5 percent gain. Tempe, AZ and Charleston, SC showed median rent increases of 3.0 and 2.9 percent respectively.

Green Bay, WI was the most affordable one-bedroom location and Salt Lake City, UT was the priciest with its $1,205 median rent almost doubling Title Town’s $611. 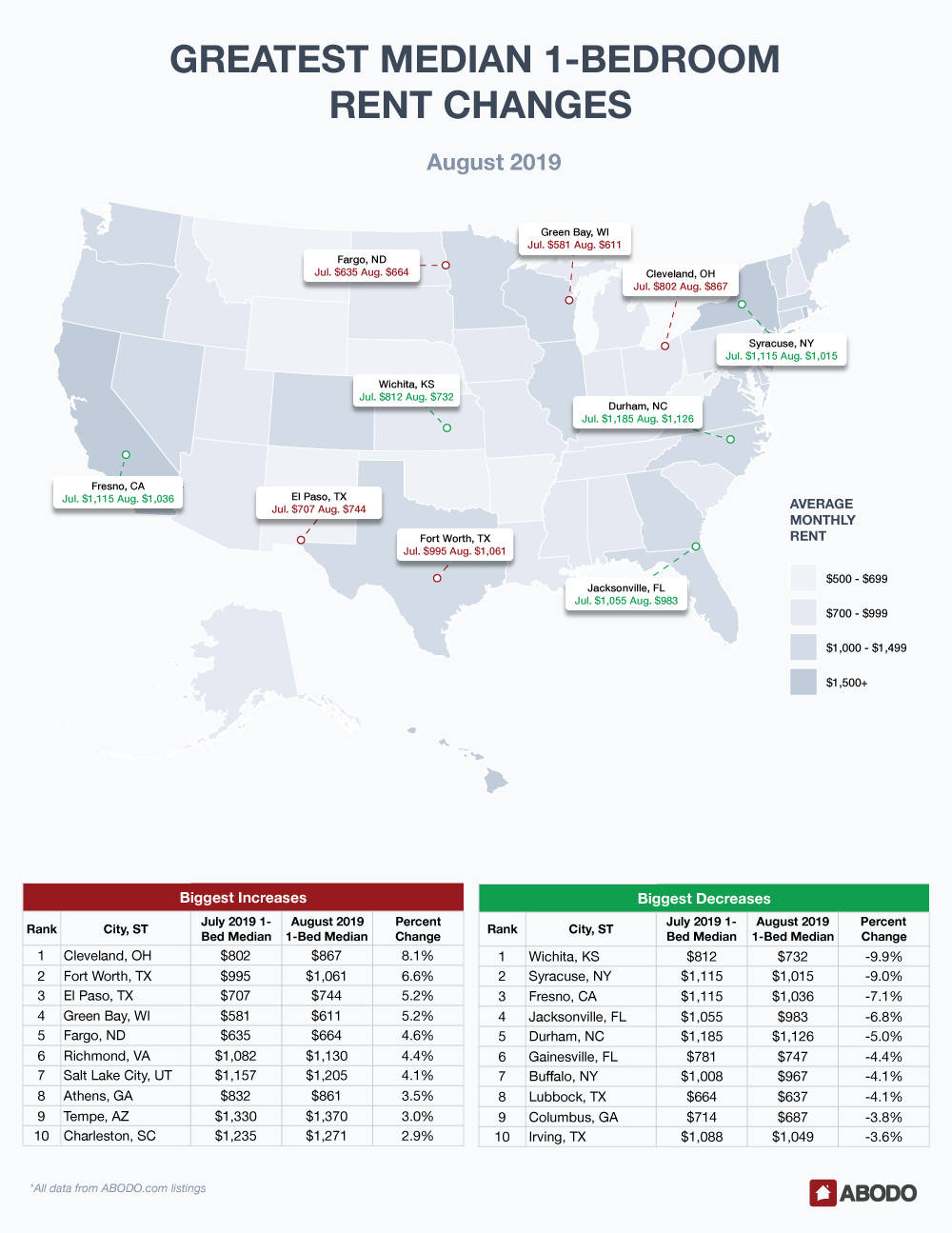 Like the gainers, we saw no double-digit losers in August. Wichita, KS did lead the list with a 9.9 percent decrease to a very reasonable $732 and Syracuse, NY followed with an even 9 percent loss to a median rent of $1015. In third place on the loser’s list we found Fresno, CA with a significant 7.1 percent loss to $1,036. Jacksonville, FL held the fourth spot with a loss of 5 percent. Alone in sixth place was Gainesville, FL, falling 4.4 percent from a median $781 to $747. Buffalo, NY and Lubbock, TX both lost 4.1 percent although Buffalo’s median rent stood at $967 compared to Lubbock’s $637. Finally, Columbus, GA and Irving, TX were the smallest losers with falling rent at rates of 3.8 percent and 3.6 percent respectively.

Durham, NC was the priciest one-bedroom on the decreaser list at $1,126, while Lubbock, TX was the most affordable at $637.

In a stark contrast to one-bedroom apartments, two-bedroom units continued their climb seen since May with a YTD increase of 6.83 percent to a median August cost of $1,360 compared to July’s $1,357.

August individual city top 10 movers reported a narrow range as only 3.6 percentage points separated first place and last place cities. Like its one-bedroom cousin, Cleveland, OH took the top spot with a 5.6 percent increase to $834. Again, we also saw Green Bay, WI on the top ten list tied for second place along with Athens, GA, both posting a 4.9 percent increase. Familiar Fort Worth, TX came in fourth with a 4.2 percent increase, and El Paso, TX appeared in fifth place with an increase from $893 to $929—or 4.0 percent. Santa Ana, CA, Charleston, SC and Colorado Springs, CO rose between 3.0 and 3.9 percent, and cold Syracuse NY—and colder yet Grand Rapids, MI—lost 2.4 and 2.0 percent respectively. 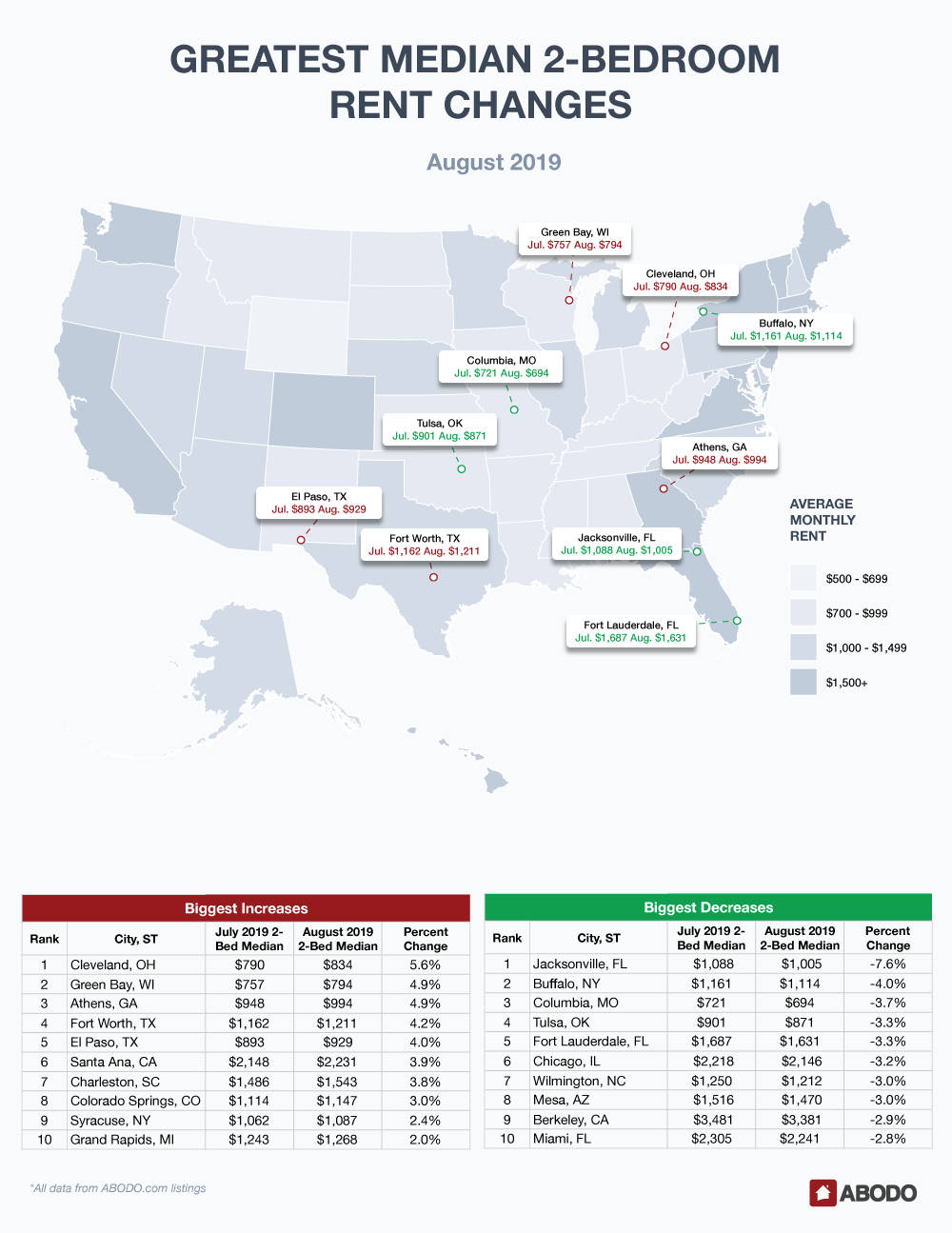 Jacksonville, FL fell 7.6 percent to a median $1005. The second-place loser, Buffalo, NY only lost an even 4 percent and was closely followed by Columbia, MO reporting a 3.7 percent decline to $694. After that, the list was tightly packed with Tulsa, OK, Fort Lauderdale, FL and Chicago, IL showing very similar 3.2 to 3.3 percent declines. In fact, the last four cities on our top 10 loser list, Wilmington, NC, Mesa, AZ, Berkeley, CA and Miami, FL all fell between 2.8 and 3.0 percent.

Renters won’t mind a cheaper Berkeley rent since, as we have mentioned before, its $3381 two-bedroom price tag is steep. Compare that to Columbia, MO with an amazingly low two-bedroom median rent of only $694.

Last month we said, “we are comfortable with our feeling that rental prices will stay steady or increase slightly barring any major geo-political events.” Even though one-bedroom units showed us a little continued weakness, that was balanced by the two-bedroom steady gains we saw in August.

Inflation is still tame; oil prices, while a little volatile, still sit under $60 per barrel. Yes, we have seen some geo-political instability, but nothing pops out at this point to change our view that a steady or slightly increasing rental market is the norm.

Recessions are inevitable, but the next one may wait until after the 2020 election. Until then, again, we are cautiously predicting an unexciting but slightly increasing national rental market.