In our July report we asked if the 2018 rent price increase had finally found the bottom, and according to August stats, both one-bedroom and two-bedroom prices are indeed on the rise.

Continuing the new upward trend, median national one-bedroom rents increased slightly by $5 to $1,013 while nudging closer to levels not seen since May. One-bedroom units are still down 3.15 percent YTD, however. 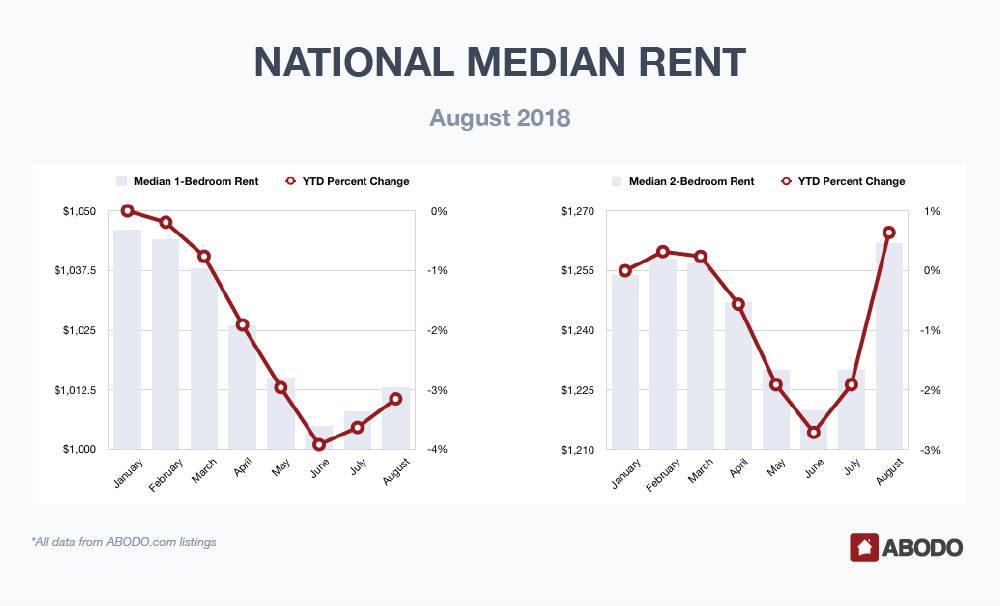 Two-bedroom apartments posted a large $32 gain to an median of $1,262 while cutting the yearly deficit by almost two-thirds to a mere 0.64 percent. This represents a significant move.

Big changes here as July’s number one increaser wouldn’t even make it onto August’s chart.

In August, Columbus, OH led the leaders with a hefty 14.2 percent increase, followed by Syracuse, NY with an 11.7 percent rise. 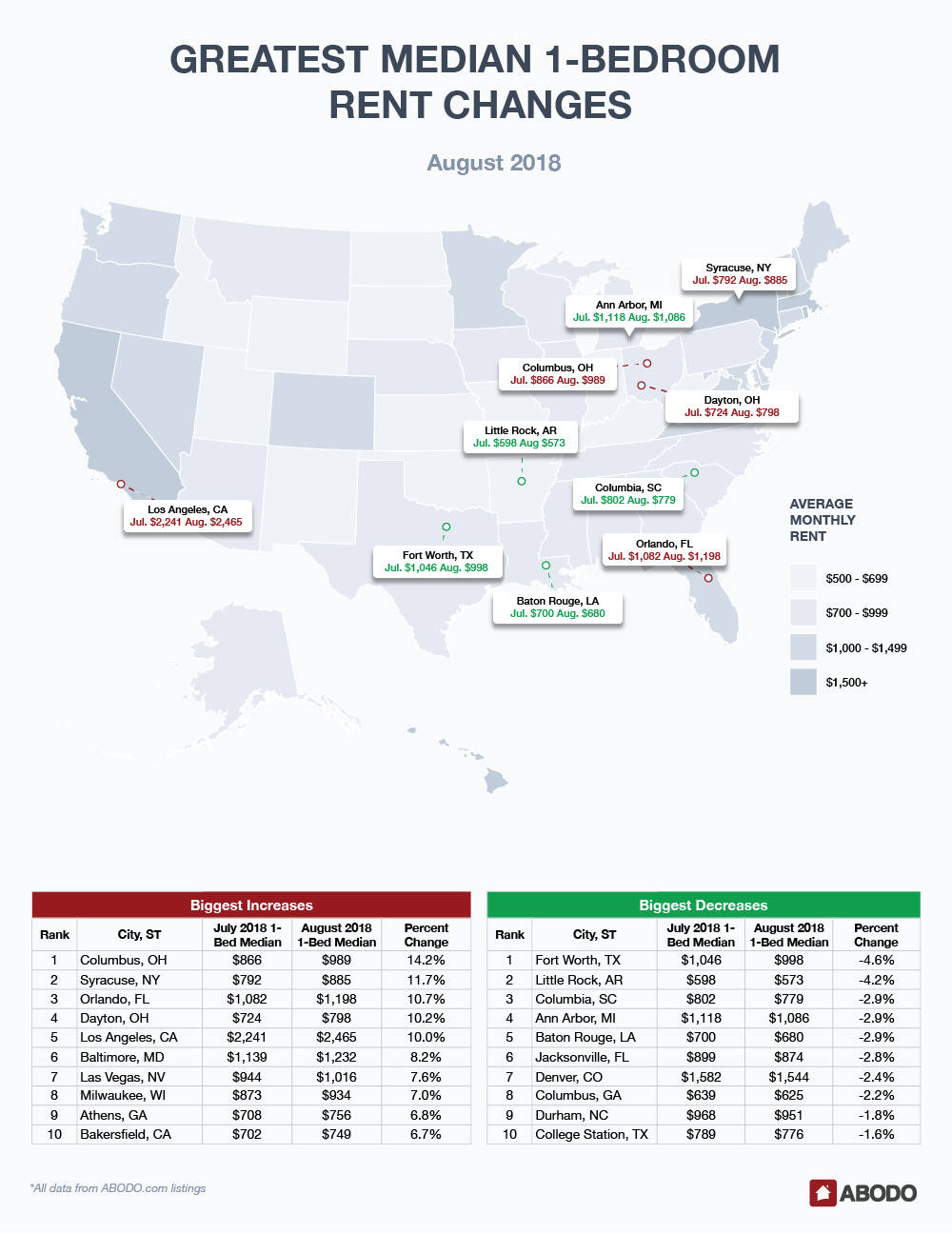 Interestingly, the August range of decreases mirrored the July stats as the top ten reported decreases of 4.6 percent to 1.6 percent.

Fort Worth, TX and Little Rock, AK saw the biggest drops at -4.6 percent and -4.2 percent respectively.

Rock and Roll Hall of Fame host Cleveland, OH showed the biggest two-bedroom increase at 12.9 percent moving from a very affordable $737 to $832. Pricey Scottsdale, AZ followed with an massive 11 percent rise to $1,950 from July’s $1,756. Las Vegas, NV, Long Beach, CA, and New Orleans, LA were not far behind with increases in the 8.0 to 9.6 percent range.

The second half of the top 10 increasers all posted monthly gains of over 5 percent with Baltimore, MD leading at 6.3 percent, and San Francisco, CA, Orlando, FL, and Los Angeles, CA moving by 5.2 to 6.3 percent. 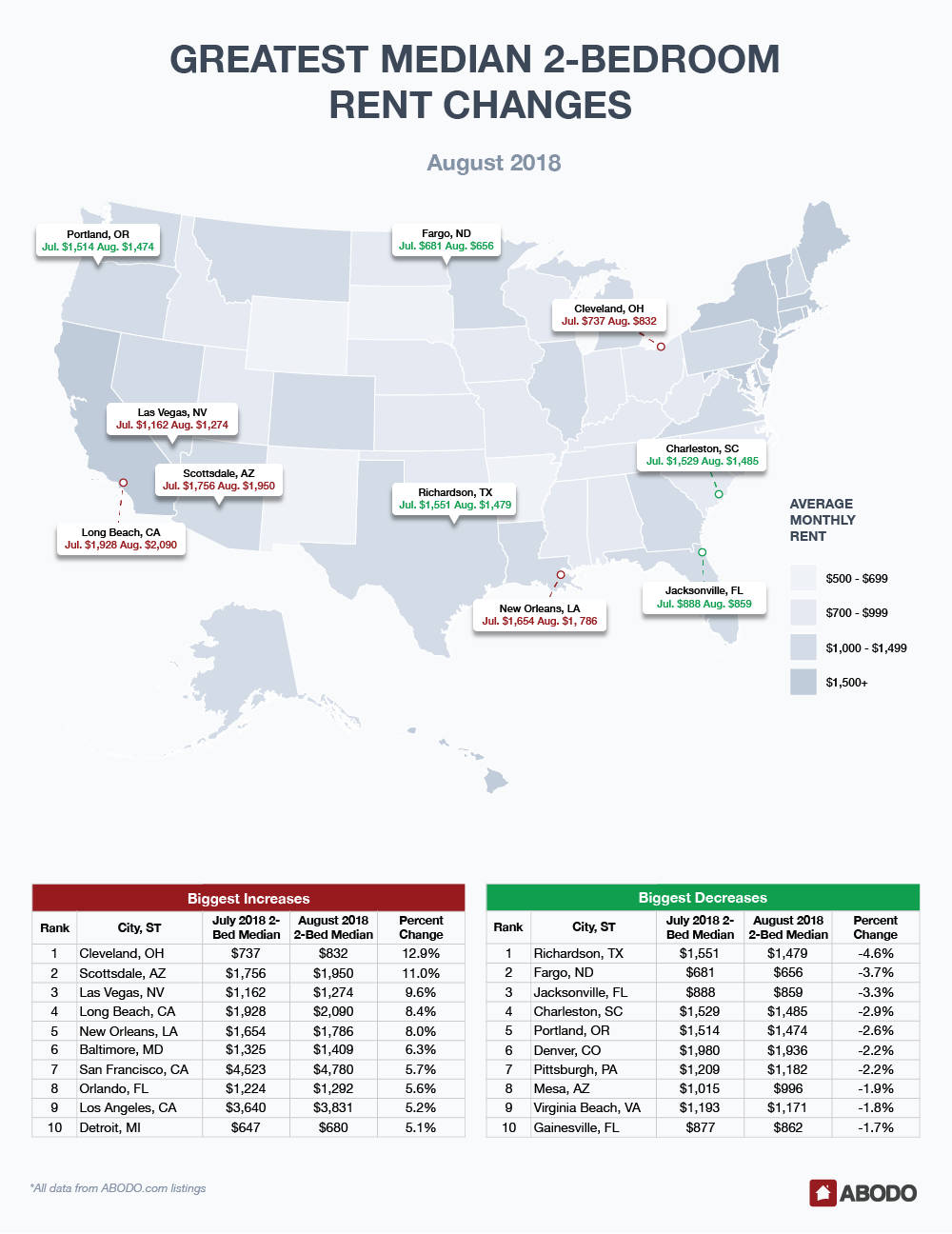 Like one-bedroom units, August drops were much tamer than August rises as Richardson, TX led the list with a 4.6 percent decrease to $1,479. Cold Fargo, ND and warm Jacksonville, FL shared decreases of 3.7 to 3.3 percent while Charleston, SC, Portland, OR, mile-high Denver, CO and Pittsburgh, PA all fell by 2.2 to 2.9 percent.

Rounding out the top ten two-bedroom declines were Mesa, AZ and Gainesville, FL with less than 2 percent decreases each.

Rent Report Recap: Where We Stand

July saw an end to consistent 2018 decreases, and August continued the modest up-trend.

As the Fed continues to raise interest rates while unemployment remains low, the fires of inflation look to be rekindled, and this will add to upward apartment rent momentum.

Locally, as in cities like Austin, TX where thousands of new apartment units have recently come online, increases may be muted for a while, but as of now, the national trend is up. Let’s see what September brings.