Where are the best places to live?

We spend a lot of time thinking about what makes a renter choose to live in one location instead of another. We’ve studied the cities most attractive to immigrants, examined the most (and least) tolerant cities and states, and found the most active counties in each state. We’ve tracked rent prices across the country. We’ve even pinpointed the best cities for renters across eight employment categories.

But there’s one basic question that’s a bit harder to quantify: Where do renters most enjoy… well, renting?

What We Mean By ‘Satisfaction’

What does it mean to be a “satisfied” renter, exactly? Being pleased (or displeased) with your living arrangement is typically the result of a melange of details ranging from hard facts, like location and price, to softer sentiments, such as whether you feel like your neighborhood is safe.

For our renter satisfaction scoring, we looked at a range of indicators in two categories: neighborhood and home.

For neighborhood satisfaction, we drew from the U.S. Census’ American Housing Survey of 25 metro areas and considered renters’ own opinions on their area’s crime, schools, public transportation, and litter, as well as their overall rating of their neighborhood.

For their own rented units, whether they’re apartments or single-family homes, we considered issues ranging from rodents and roaches, to heating issues, mold, water leaks, and more significant structural problems, like missing walls and holes in the roof. (For more details on these rankings, read our methodology.)

We’ll tackle each of those categories in turn, but first, let’s combine them with rent affordability for an overall look at which metro areas have the most satisfied renters. 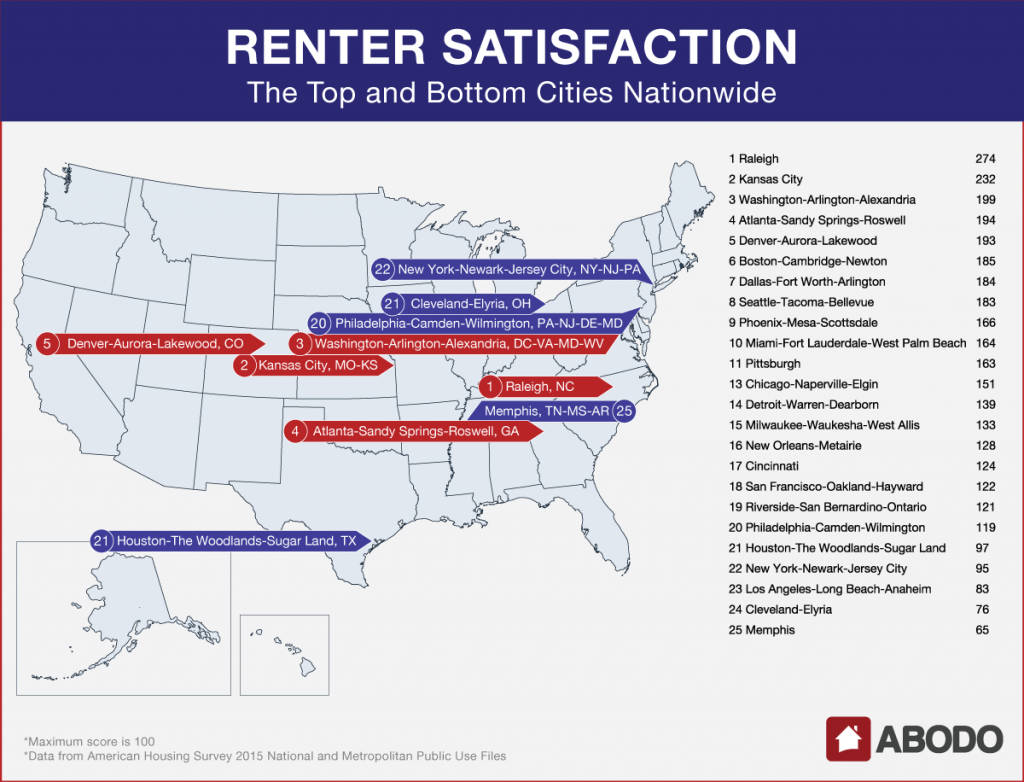 Way down in 11th place is Pittsburgh, PA, with a score of 163, despite having the highest affordability score of all 25 metro areas. The next two most affordable cities are our overall top two cities — Kansas City and Raleigh — followed by Houston-The Woodlands-Sugar Land, TX; and Cincinnati, OH-KY-IN.

Bringing up the rear, renters in Memphis, TN-MS-AR, are the least satisfied overall, with a total score of 65 out of a possible 300. Cleveland-Elyria, OH (76); Los Angeles-Long Beach-Anaheim, CA (83); New York-Newark-Jersey City, NY-NJ-PA (95); and Houston-The Woodlands-Sugar Land (97), are the only other five areas to score less than 100 total points.

New York-Newark-Jersey City and Los Angeles-Long Beach-Anaheim were undoubtedly dinged for their low affordability scores (of just 8 and 4 out of 100, respectively), but our least affordable city on our list is Miami-Fort Lauderdale-West Palm Beach, FL

Cities Where Renters Love Their Apartments

High rent aside, Miami renters love their apartments, earning the highest home satisfaction score (and there’s tons to do in Miami, so that’s never a bad thing). It’s no surprise that our overall satisfaction first-place city of Raleigh also scores highly with an 83 out of 100, earning the #2 spot. Washington-Arlington-Alexandria (81), Riverside-San Bernardino-Ontario, CA (73); and San Francisco-Oakland-Hayward, CA (70) round out the top five.

The above cities reported the fewest structural and cosmetic problems, and their renters gave their homes high marks. 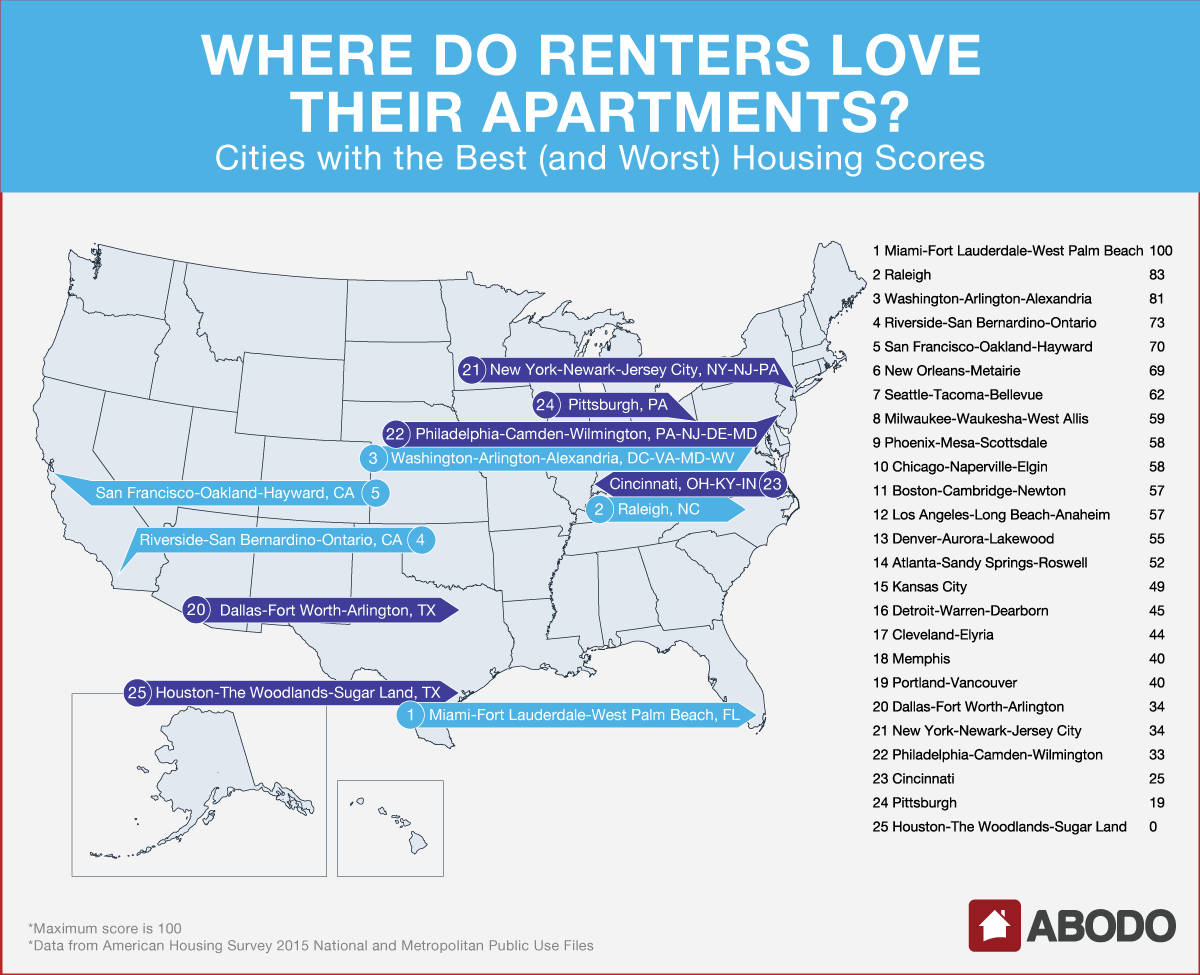 Earlier, we noted that Houston-The Woodlands-Sugar Land had one of the best affordability scores in the country — and that’s a good thing, considering that the metro falls in last place for renter home satisfaction. Among other unpleasantries, renters in Houston gave their dwelling the lowest average rating (7.3 out of 10) and reported the most broken or boarded up windows (which 11.3% of surveyed Houston renters reported), as well as some of the most reports of missing wall material (6%) and mold (6.5%).

Pittsburgh (19); Cincinnati (25); Philadelphia-Camden-Wilmington, PA-NJ-DE-MD (33); Dallas-Fort Worth-Arlington, TX, and New York-Newark-Jersey City (both tied with 34) also scored poorly. The New York area scored the worst in two categories: being uncomfortably cold for 24 hours or more (19.4%), and not having a working toilet at some point in the last three months (5.7%).

Of course, these experiences aren’t unanimous, and even in cities with the most reports of a problem, the numbers still aren’t overwhelming. For example, rainy Seattle-Tacoma-Bellevue, WA, had the most renter reports of mold — but it’s just 8.7% of renting households. If you’re a renter, many properties and management agencies have reviews online (and on Rentable) that can help ensure that you’ll be in good hands.

Cities Where Renters Love Their Neighborhoods

Raleigh comes out on top again for neighborhood satisfaction. The only category that gave Raleigh real trouble was public transportation. Just 40.7% of renters in Raleigh think their neighborhood has a good bus, subway, or commuter bus service, which is the worst score of all 25 cities. The only other factor for which Raleigh didn’t get top marks was for its schools:  76.7% think their neighborhood has good schools, the fourth-best school score, while Kansas City was the most confident, with 79.6%.

The Washington D.C. (89) and Kansas City (87) areas, as always, follow closely behind Raleigh, in second and third places. In fourth place, Boston-Cambridge-Newton, MA-NH (86), makes its first appearance in the top five. Dallas-area renters might not love their apartments, but, as it turns out, they do love their neighborhoods: Dallas-Fort Worth-Arlington comes in fifth place, with a score of 75. Atlanta and Denver tie for sixth with 71. 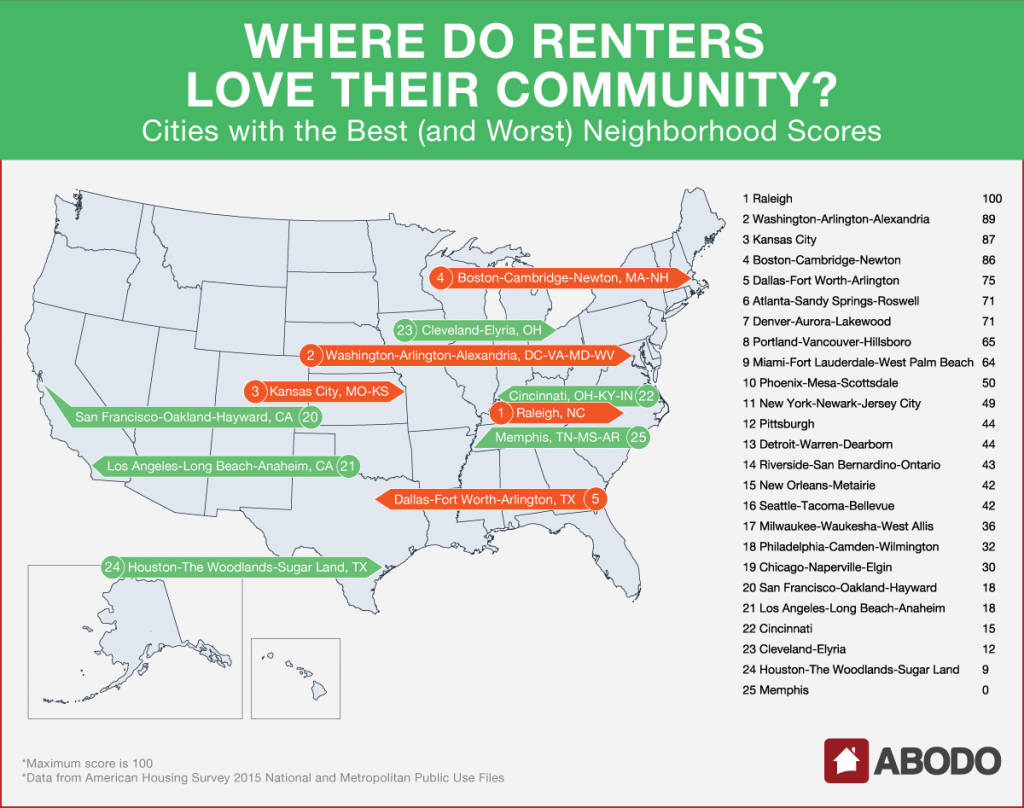 Memphis is firmly in last place for neighborhood satisfaction among renters, with the most reports of petty crime (40%) and serious crime (23.1%), and the second-most reports of vandalized/abandoned buildings within a half-block (18.5%).

Houston-The Woodlands-Sugar Land isn’t far behind, with just 9 out of 100 points. The area ranks relatively poorly for each neighborhood factor, but doesn’t take the cake on any of them. Cincinnati was rated the most poorly by its renters, who scored it 7.3 out of 10 — for reference, our winner, Raleigh, was given a neighborhood rating of 8.1 by its renters. San Francisco-Oakland-Hayward was the hardest on its schools, with only 66.1% believing they have a good school nearby.

The Los Angeles area, which landed in the bottom five, is the trashiest city in our ranking: 20.2% of renters report a small or large amount of trash, litter, or junk laying around within a half-block.

A great neighborhood might make up for a dingy kitchen. You might be OK with the occasional leaky pipe if your bathroom is palatial.

But even the most beautiful bedroom in the world can’t save an apartment with rats or roaches in it. 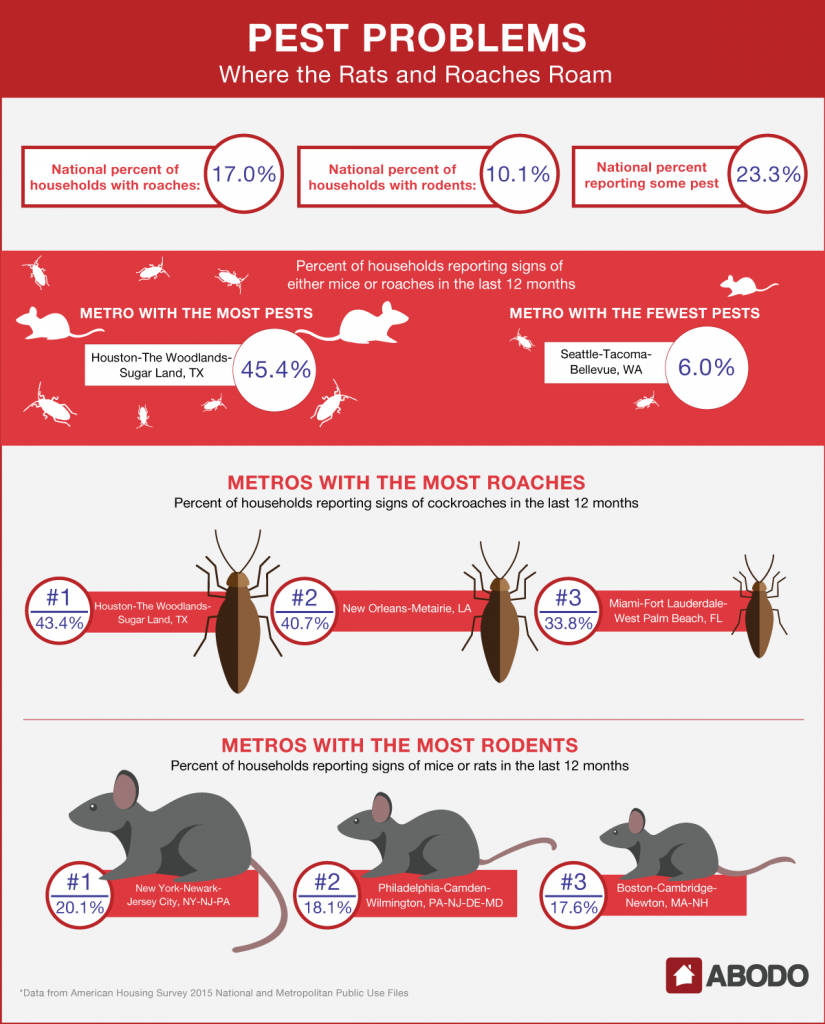 Almost a quarter of the country’s renters report pests of some kind in their apartments. It’s worse in some cities than in others. In Houston-The Woodlands-Sugar Land, 45.4% of renters report having seen evidence of rats, mice, or cockroaches in the previous 12 months. That’s almost double the national figure, and the highest in the country. (The metro area with the fewest pest incidents is Seattle-Tacoma-Bellevue, where only 6% of renters reported signs of pests.)

The American Housing Survey tracks pests by type: rats/mice and cockroaches. Nationally, 17% of American renters report cockroaches in their apartments, while 10.1% say they’ve seen mice or rats in the previous 12 months.

The worst cities for roaches are in the wet and humid South. Houston-The Woodlands-Sugar Land was the worst in the country, with 43.4% of renters reporting roaches in their apartment. New Orleans-Metairie, LA (40.7%), and Miami-Fort Lauderdale-West Palm Beach (33.8%) followed closely behind.

When it comes to rats and mice, the East Coast takes the lead. In New York-Newark-Jersey City, 20.1% of renters say they’ve seen evidence of mice or rats in the past 12 months. In Philadelphia-Camden-Wilmington, that figure is 18.1%, and in Boston-Cambridge-Newton, it’s 17.6%.

Why do renters love their apartments? Why do they want to move on from them?

A lot of what makes a home a home is personal and unquantifiable. It’s difficult to assign a number to a neighborhood’s strong sense of community, or to explain why some cities just “feel right” for certain people.

But if our data has shown us anything, it’s that certain cities are more favorable renting environments than others. And it turns out that price isn’t the only factor — renters, like homeowners, care about quality. They care about local schools and public transportation; they want safe streets and clean sidewalks. The cities that best address such renters — like Raleigh, near the top in every category — provide high-quality, affordable housing within an urban environment where renters feel served by local city infrastructure.

Nearly 37% of Americans rent, and their numbers are growing. As American cities continue to expand, city planners and developers would do well to follow Raleigh’s example, and heed the concerns of a growing renter base comprising Americans from a variety of backgrounds, ages, and income levels

We analyzed data from the U.S. Census Bureau’s 2015 American Housing Survey Public Use Files about housing quality, neighborhood features, and cost for renter-occupied households in the 25 metro areas included in the survey. We calculated a subscore for each of these three categories then totaled them to calculate a final renter satisfaction score for each metro.

To calculate the neighborhood satisfaction subscore we considered eight factors, listed below. We ranked the metros for each factor, awarded them between 1 and 25 points based on their ranking, and calculated a weighted sum of the points for each factor.

We calculated a home satisfaction subscore in the same manner, considering the following 10 factors:

We gave each metro a cost subscore based on how it ranked for the median household percent of income spent on rent.

After calculating each subscore, we scaled each to range from 0 to 100. The final renter satisfaction score is the total of these scaled subscores and ranges from 0 to 300 possible points.