Rent vs. buy: that is the question that many Americans consider each year. You might take for granted that cities are renter hubs while more rural areas are where the homeowners reside. Considering cities’ limited space and transient career-chasers not looking for the long-term commitment of a home, that’s a fair guess. Yet, of more than 400 urbanized areas around the country with a population greater than 100,000, just 21 are composed of at least 50% renters, according to data from the U.S. Census’ 2015 American Community Survey.

And that number appears to be poised to grow. As the Pew Research Center reports, the number of homeowners swapping deeds for leases in the rent vs. buy argument continues to increase, with 3 million making the switch in 2011, compared with 2.5 million in 2001.

Taking a look back at the 2012 ACS data for rent vs. buy, we can see evidence of the trend toward renting. In 2012, there were just 14 predominantly renter cities. In 2013, there were 18. The current number of 21 has been holding steady for two years, and six cities are currently barely missing the majority-renter cut, with more than 49% of the population renting. Among them, Durham, NC; Lubbock, TX; and San Diego, CA, seem most likely to move into renter-majority status, with renter numbers rising each year. Some cities, however, are on the downslide. Macon, GA, for example, just dipped below 50% renters for the first time in years in 2015. Fresno, CA; Las Vegas, NV; and Stockton, CA, also bounce around the border a bit.

So what makes a renter-dominated city? What makes someone want to decide within the rent vs. buy debate? In this study, we’ll look at where the renter-majority cities are, who makes up their renter population, and what could be driving the uptick. 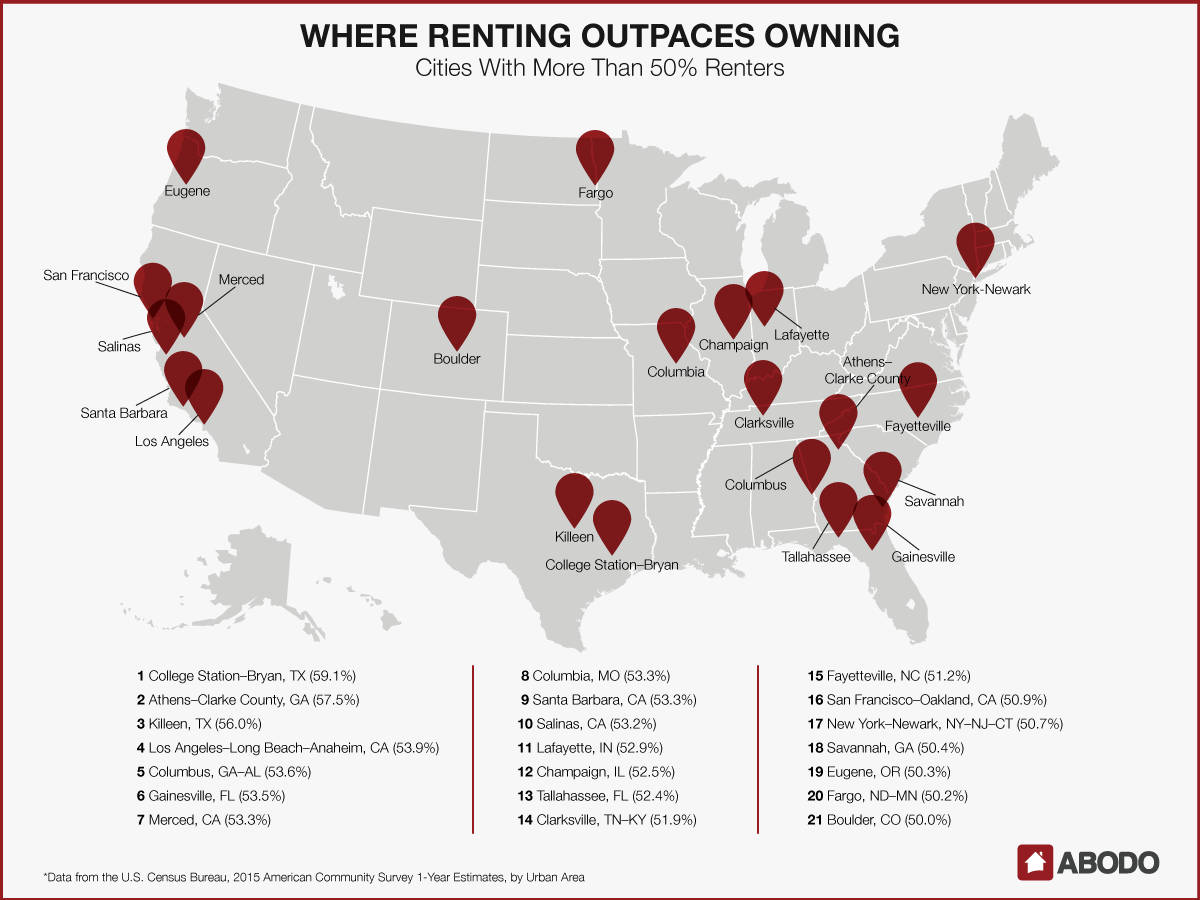 Some of the cities on this list are no great surprise. It will raise no eyebrows, for example, that most housing units (53.9%) in the Los Angeles area are rented, not owned. The same goes for New York (50.7%) and San Francisco (50.9%) — in fact, five California cities make the list, more than any other state.

However, going down the list of the nation’s largest cities — ostensibly where the most people are trying to live — you’ll find that many are unexpectedly absent from this list. Chicago, IL; Dallas, TX; Houston, TX; Washington, D.C.; Philadelphia, PA; even Miami, FL, are still dominated by homeowners. Both Dallas and Houston are hovering around the 43% renters mark, while Miami is 41.49%; Washington, D.C. is 40.42%; Chicago is 36.1%; and Philadelphia is just 33.8% renters.

RENT VS. BUY: WHO ARE THEY?

Who are these renters who’ve chosen rent in the rent vs. buy debate? A cursory glance at their ages hews to conventional wisdom. The majority of renters in our list of 21 renter-dominated cities are under 44 years old, with the highest percentage (24.29%) falling between the ages of 25 and 34. Owners tend to be older — a whopping 77.16% of them are over 45. 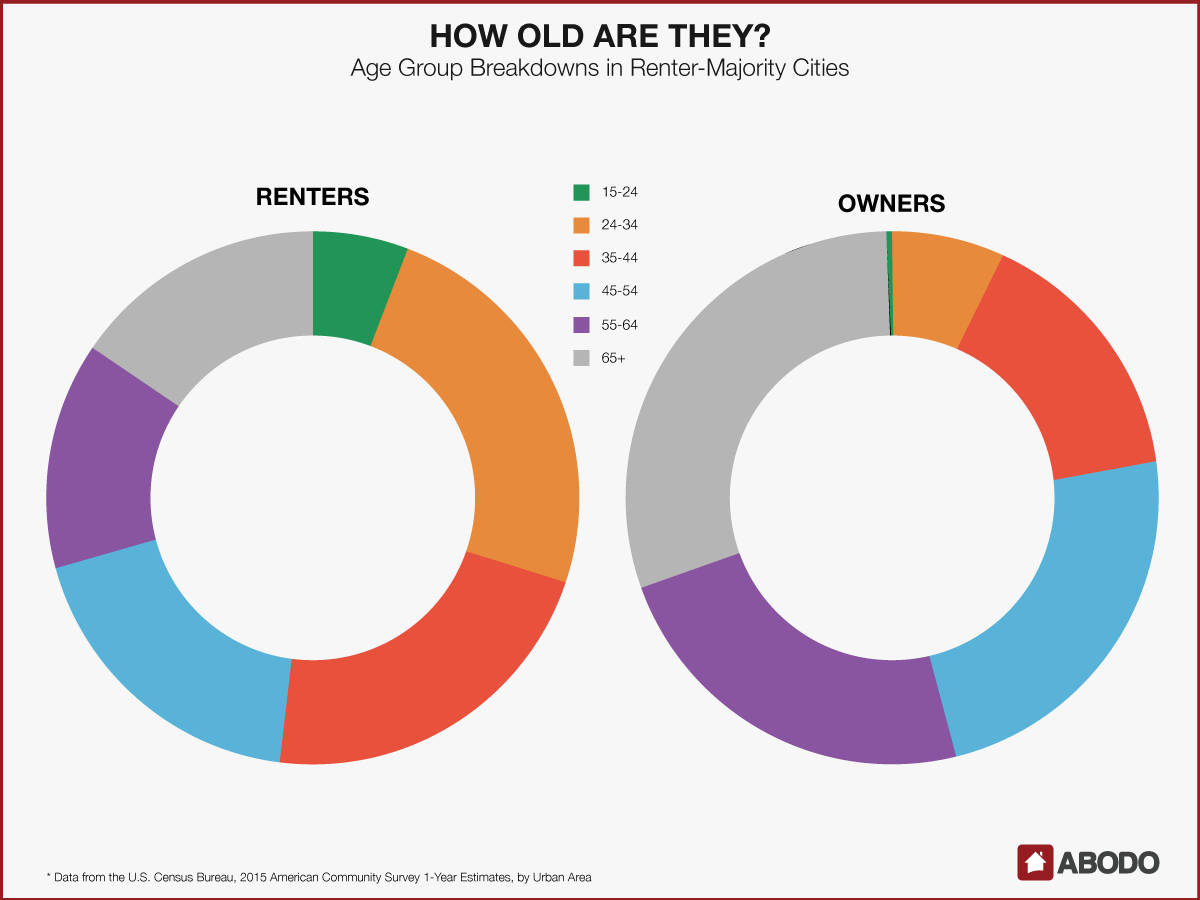 Renting, clearly, is not only for the young in renter-dominated cities. It’s also not only for the single and unattached. When we examined the percentages of renters whom the ACS identified as “families” vs. “non-families,” we saw a wide range from city to city. In Salinas, CA, 76.3% of renter households were families, while in Boulder, CO, only 20.92% were. 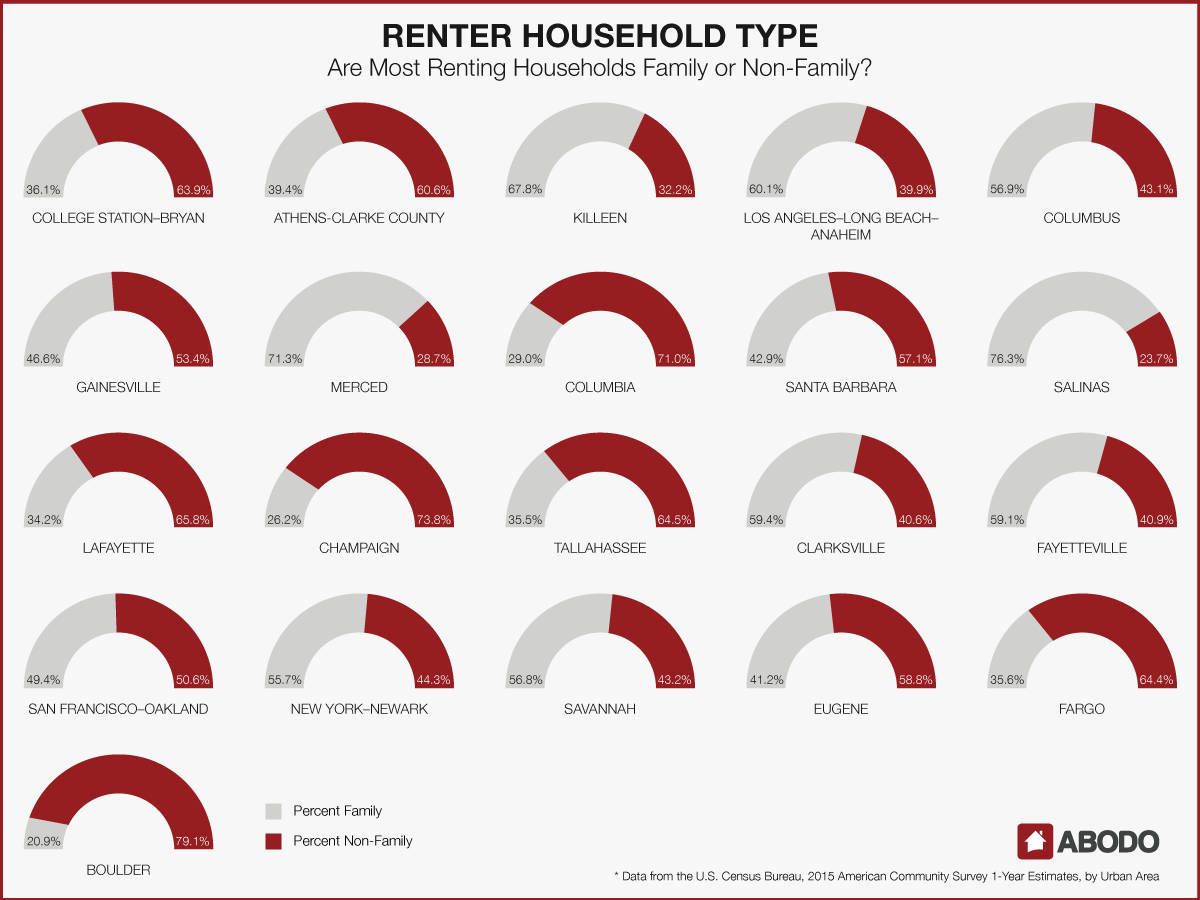 In 11 of the 21 renter-dominated cities, over 50% of renter households were occupied by non-families. Those cities — Boulder, CO; Champaign, IL; Columbia, MO; Lafayette, IN; Tallahassee, FL; Fargo, ND; College Station, TX; Athens, GA; Eugene, OR; Santa Barbara, CA; Gainesville, FL — share a common identity: They’re all college towns, home to major public state universities. It’s unsurprising, then, that their local economies would be flooded with renters, and that the (sometimes vast) majority of renters would be young students who hadn’t yet started families.

The other 10 cities are a more mixed bag. In a few — San Francisco-Oakland, New York-Newark, and Los Angeles-Long Beach-Anaheim — extremely high housing costs go a long way to explain why families are choosing to rent. In the San Francisco-Oakland urbanized area, for example, the 2015 monthly cost for homeowners with mortgages was $2,754 — the highest in the country, and over $1,000 more than the area median rent of $1,603. And in New York-Newark and Los Angeles-Long-Beach-Anaheim, monthly homeownership costs exceeded the area median rent by $1,326 and $965, respectively.

Four more of these family-dominated renting cities are located near major military bases: Killeen,TX (Fort Hood); Clarksville, TN (Fort Campbell); Fayetteville, NC (Fort Bragg); and Columbus, GA (Fort Benning). Active military servicepeople (and their families) receive a Basic Allowance for Housing, which they can put toward accommodations off- or on-base. Given the high mobility of military families — the U.S. Department of Defense estimates that the average child in a military family moves six to nine times during a school career — it makes sense that renting (and not owning) would be a popular option off-base. 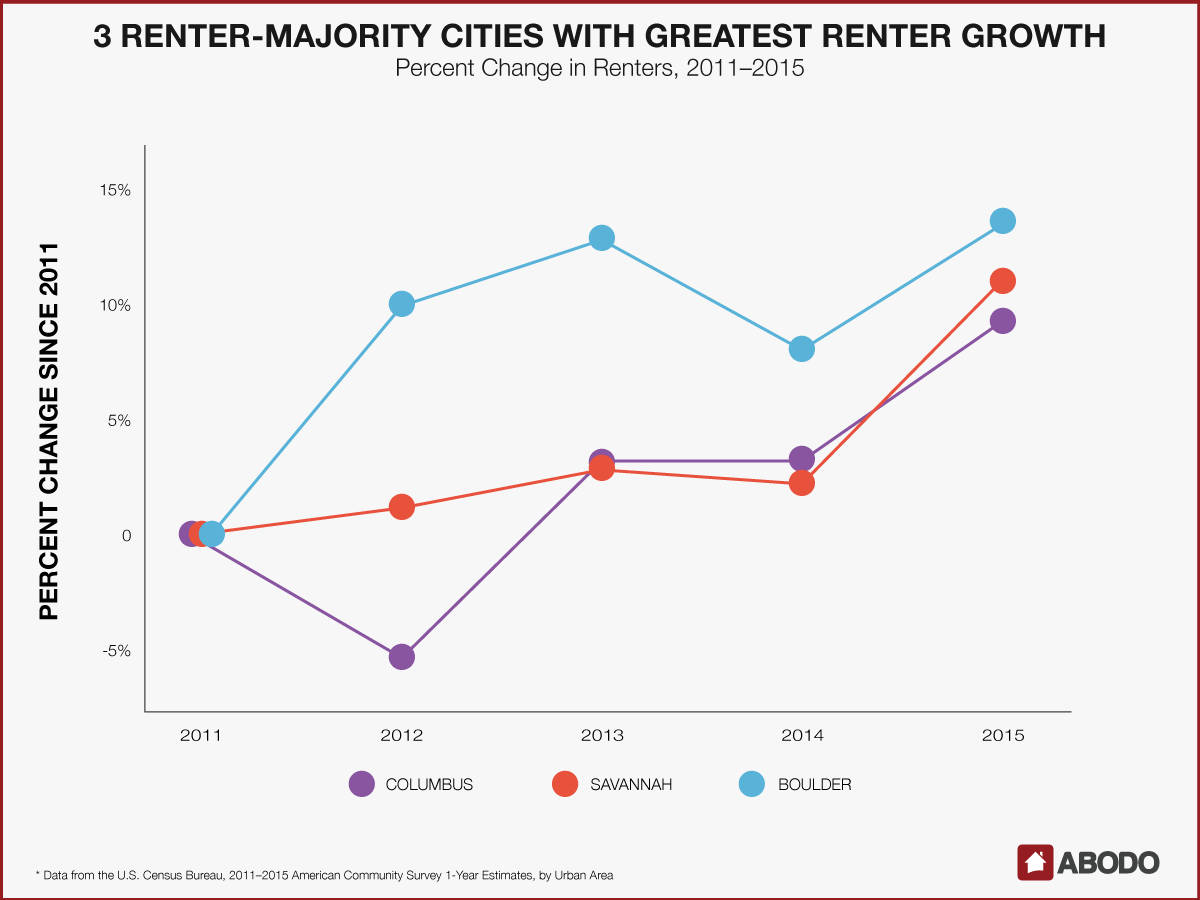 Boulder, home to The University of Colorado and over 37,000 undergraduate and graduate students, is an obvious rental hotspot. But it’s also a growing city, just 25 miles north of the booming Denver Metropolitan Statistical Area. According to The City of Boulder and the Colorado State Demographer’s Office, the city added over 10,000 new residents between 2010 and 2015, and over 13,000 jobs.

Savannah, GA, doesn’t support a major state university, but it is the home of four colleges: Armstrong State University, Savannah State University, South University, and Savannah College of Art and Design. It’s a historic waterfront city with high housing costs, and from 2010 its population growth mirrored Boulder’s. According to the U.S. Census, the population grew 6.9% between 2010 and 2015, adding 9,339 new residents.

Columbus, GA, is the third-largest city in Georgia, with a population of over 250,000. It’s home to Fort Benning, the largest Army base in the country, which supports (but does not necessarily house) over 120,000 active-duty military, reserves, retirees, civilian employees, and family members. 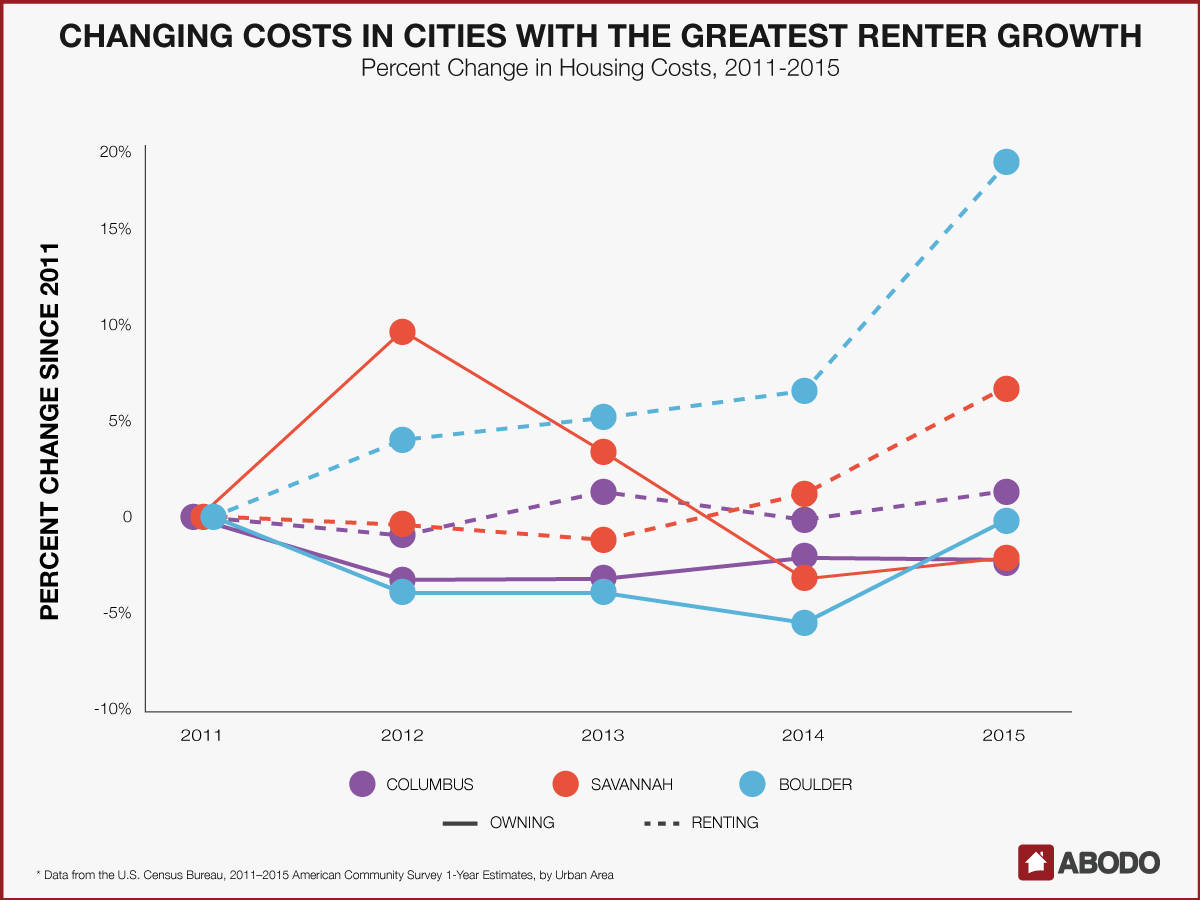 One might expect that as renter demand increases, so too would renting costs. That was definitely true for Boulder, which saw a 19.43% increase in renting cost from 2011 to 2015. One reason for this might be limited supply. Boulder sits at the base of the Rocky Mountains, and its expansion plans restrict development above elevations of 5,750 feet by limiting water and sewer service. That curtails large-scale residential development, pushing it east into an already crowded urban area.

Interestingly enough, Boulder ownership costs decreased steadily over much of this time period, and looked to continue on their downward trajectory until 2014 — precisely when renting costs also skyrocketed.

Do rising home-ownership costs affect the decision to rent? Maybe. But it’s only one factor among many. If a rental market is dominated by young professionals and college students — as is the case in Boulder — falling homeownership costs won’t affect the rental market that much. But in Savannah and Columbus, where families account for about 58% of renters, changes in the cost of homeownership might have more noticeable effects.

Columbus, for example, experienced a 5.91% decrease in renter population from 2011 to 2012, a period of time in which rental costs decreased 1.48% and homeownership costs decreased 3.4%. The rental population rebounded sharply the next year, gaining back all the ground it lost and then some, for a percentage 3.67% greater than it had been before the downturn. In that same period of time, homeowner costs stayed approximately level, while rent increased to 1.6% above the 2011 benchmark.

It’s worth noting that the last convoy of American troops left Iraq in late 2011, and the United States Army Armor School — which includes over 7,500 soldiers — moved from Fort Knox to Fort Benning in 2011. Such an influx of residents — some new and some returning, some with families and some single, some renters and some homeowners — makes for a volatile housing dynamic. Perhaps returning service members wanted to put down roots as homeowners, and new residents, unsure of their permanent plans, felt they would rather rent. Short of an extensive study of the housing supply in Columbus, it’s hard to say just how much ownership costs affect the decision to rent or own.

Nationwide, analysis of rent vs. buy shows that renters are on the rise. In fact, 2015 saw 1.4 million new renter households, creating the largest percentage of renter households the nation has seen since the 1960s — 36.4%. Thanks to this rental boom, renting became the majority in 21 U.S. cities in 2015, up from just 14 three years prior. This renting surge is also leading to an influx of new property management companies who are competing to manage the new rentals on the market. “As investors buy homes and apartments to lease, they are hiring property managers who will find renters and deal with the day-to-day management of these rental properties”, says Landon Murie of Goodjuju Property Management Marketing.

The demographics of these 21 renter-majority cities are varied, but almost unsurprising: Some are college towns, with young, temporary residents; others are near military bases, where many residents are transient; and yet others are large cities with extremely high housing costs, making ownership less than feasible.

The U.S. housing market crash of 2007 — with accompanying home price plunge — opened the door to many to finally afford a home. But at the same time, as the Joint Center for Housing Studies at Harvard notes, the crash also revealed what a risky investment home ownership can be, which continues to contribute to the trend toward renting.

As we’ve seen in our study of housing costs in the three cities where the renting population grew the fastest between 2012 and 2015, monthly cost, is not the sole factor at play in people’s decisions to rent or own. Decreasing home-ownership costs don’t always translate to more homeowners, just as increasing rental costs don’t always limit the number of people who want to rent. However, as was the case with Boulder, Columbus, and Savannah, as more cities fill with renters and vacancy rates decline, we can expect demand to drive prices up.

We analyzed data from The U.S. Census Bureau’s 2015 American Community Survey about occupied housing units in Urbanized Areas with a population of at least 100,000. We calculated the percentage of occupied housing units which were renter-occupied in order to identity our list of 21 cities where renting outpaces owning.

Once selected in rent vs. buy, we analyzed the age breakdowns of owners and renters by aggregating data for all 21 cities. We divided the total number of renters in all 21 cities by the number of renters in a given age range to find the percentage of renters falling in each age range. The same was done for owner-occupied units in the 21 cities. We also calculated the percentage of renter units occupied by families and by non-families for our selected cities using the American Community Survey’s data on household types.

We then analyzed rent vs. buy trends over five years’ time using the American Community Survey’s table of comparative housing characteristics for 2011-2015. We identified the three cities on our list of 21 that had the greatest percent increase in renters from 2011 to 2015, then tracked the percent change since 2011 for each year. Finally, we tracked median ownership costs and median gross rent costs over five years for these same three cities. Ownership costs include payments for mortgages, debts on the property, insurance, and utilities (a comprehensive list of payments included in this estimate can be found on the ACS website). Gross rent includes rent price and an estimate of average monthly cost of utilities. We calculated the percent change in median ownership and median rent costs since 2011 for each year.