At one point in time, the majority of our ancestors were immigrants. Some sought shelter from oppression while others came seeking fortune and success. Some just wanted a better life for their families, and others simply wanted to practice their religion in peace. The U.S. continues to be a beacon of light and freedom for the millions of people in Syria and elsewhere currently seeking refuge.

To truly understand American sentiment toward refugees and to see where they are most welcome in the U.S., we decided to explore dialogue on Twitter. We conducted this research with the help of our friends at International Rescue Committee so that we could better understand the response to the refugee crisis across the country. Which states are talking about refugees the most? And where do the most positive tweets come from? Do positive tweets about refugees fluctuate according to world events?

By analyzing tweets with related hashtags (such as #openborders, #refugeeswelcome, and #(in)humane) in the U.S. since January 2015, we are able to tell a story that is not often covered in the news — that many Americans are sympathetic toward refugees and do want to help. Continue reading to see which states and cities are tweeting their support.

STATES WITH THE MOST REFUGEE-RELATED TWEETS 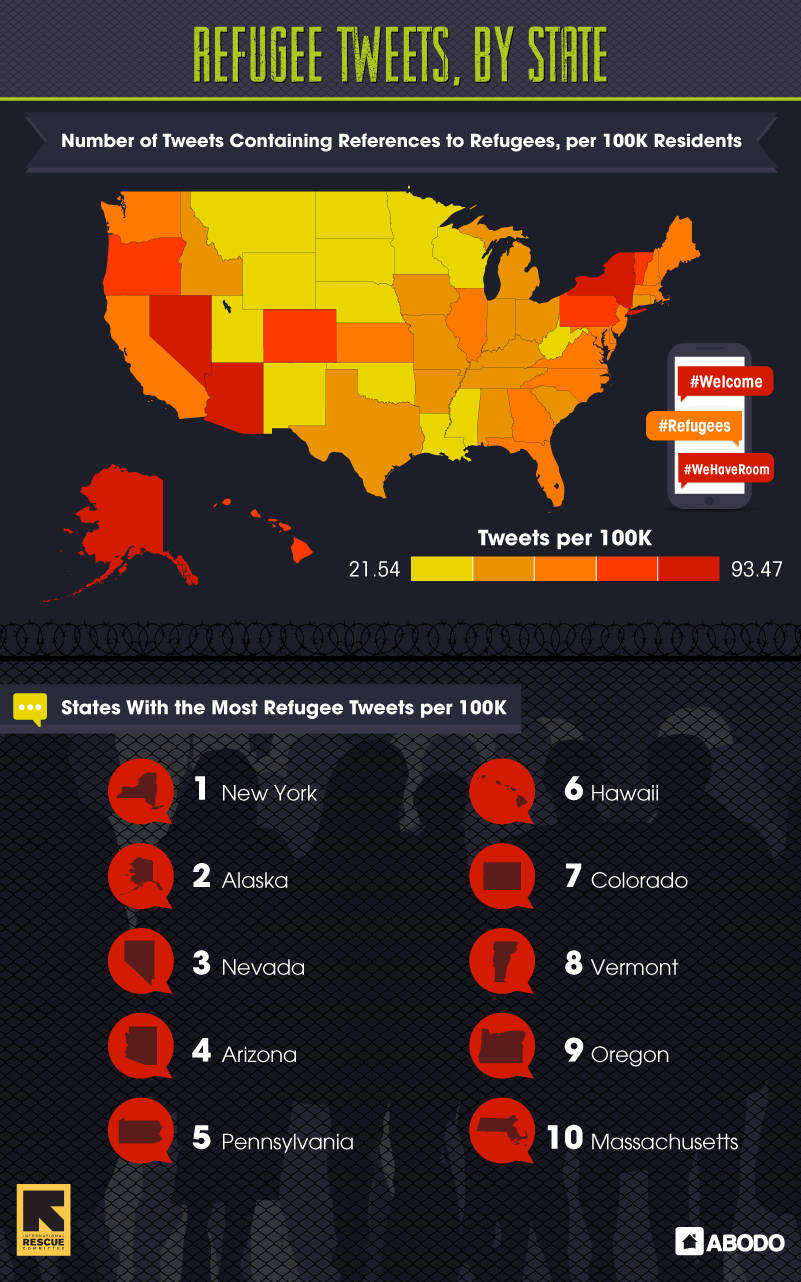 The Syrian refugee crisis has been going on since the outbreak of civil war in March 2011. But in recent months, migration and refugee movements have gained unprecedented momentum. As a result, people everywhere have been debating where refugees should go, and how many of them should go there. Before delving into the states with the most positive refugee tweets, it’s important to look at the states with the most refugee-related tweets overall.

Although the crisis might be happening overseas, Americans are extremely cognizant of what is happening. This conversation is taking place all over the country, not just in one region.

STATES WITH THE MOST-POSITIVE REFUGEE-RELATED TWEETS

As of September 2015, three-quarters of Americans supported Obama’s proposition to accept 10,000 refugees into the U.S., according to the Brookings Institution. At the same time, 44% felt the U.S. should be doing more to deal with the refugee crisis. This humanitarian sympathy is reflected in our findings.

We measured the positivity or negativity of refugee-related tweets around the country, assigning each a ”score” based on a list of positive and negative terms, and then calculating the state average. A positive term, like “#Refugeeswelcome,” earned each tweet one point, and a negative (“#NoMuslims”) took one point away. (For a list of terms, see our methodology at the end of this piece.)

Even Kansas, a Midwestern state, was extremely supportive of refugees — its score was 0.47. Making the list with a 0.36, Colorado’s governor also agrees with Obama’s refugee policy and believes it is possible to protect U.S. security while offering safety to the world’s most vulnerable.

STATES WITH THE LEAST-POSITIVE REFUGEE-RELATED TWEETS 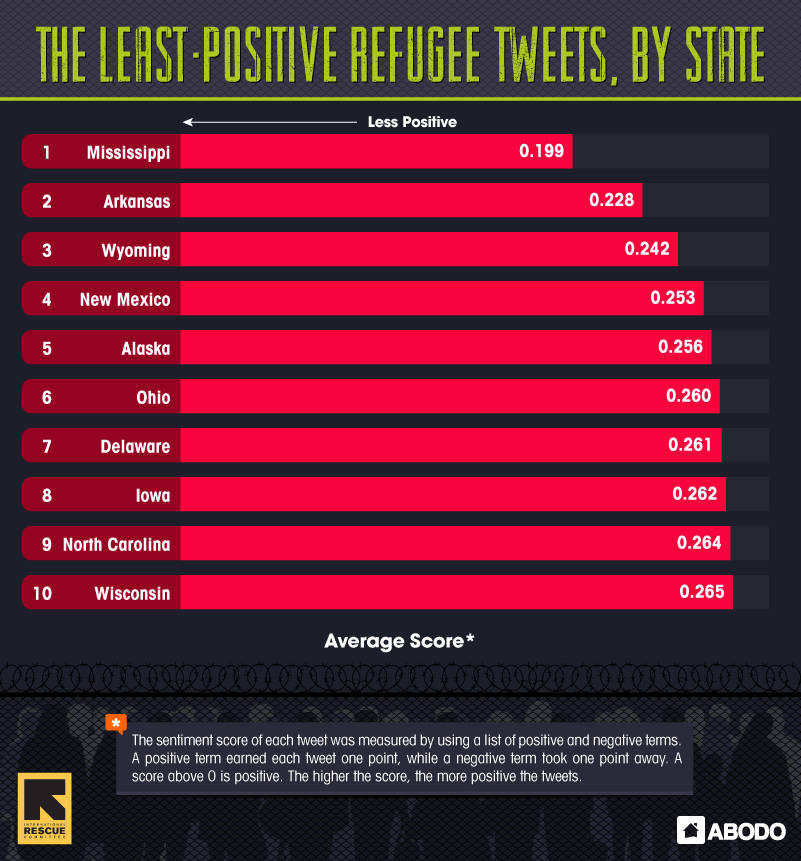 Next, we looked at states with the least-positive refugee tweets. Although these states showed some support for refugees as well, they weren’t as positive as the previous graph. These states are scattered across the U.S. as well.

A low score doesn’t necessarily mean that the state as a whole is opposed to harboring refugees. During our search on Twitter, we found that Mississippi had an average score of about 0.20. In November 2015, residents of Louise, MS, ended up calling a meeting to discuss opening the town’s doors to refugees. The mayor believed it was the right thing to do. Similarly, Arkansas had the second-lowest score (0.23). Although the state only took about one out of every million refugees worldwide last year — for a total of 13 — a local group called Canopy NWA is looking to bring 100 refugees to Arkansas yearly.

In third place and fourth place are Wyoming and New Mexico, with average scores of 0.24 and 0.25 respectively. Finally, last on the list is Wisconsin, which had an average score of about 0.27.

AVERAGE POSITIVE SENTIMENT ACROSS THE U.S. 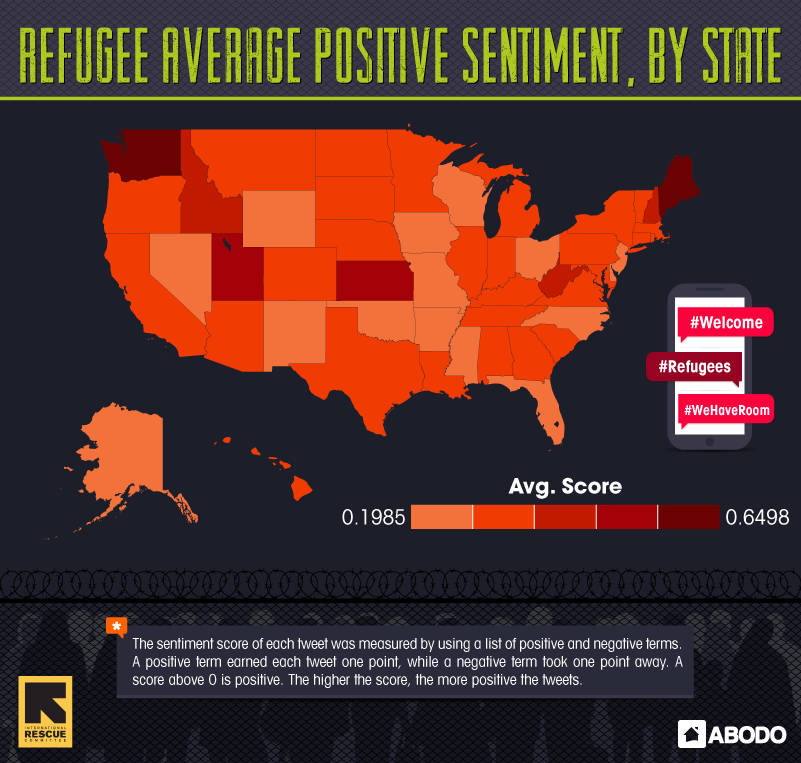 To visualize support for refugees across the U.S., we decided to paint a different picture. As previously mentioned, Washington, Maine, Utah, and Kansas had the most-positive refugee-related tweets. But what about other states? While it can be easy to assume that the rest of the country doesn’t necessarily feel the same way, that is far from the truth.

New Hampshire was not afraid to openly tweet its support of refugees. It had an average score of about 0.45. Recently, Concord accepted its first Syrian refugees. At the same time, West Virginia is making strides to connect with those seeking asylum — with an average score of 0.42, some West Virginians were still eager to welcome refugees even after the terrorist attacks in Paris. 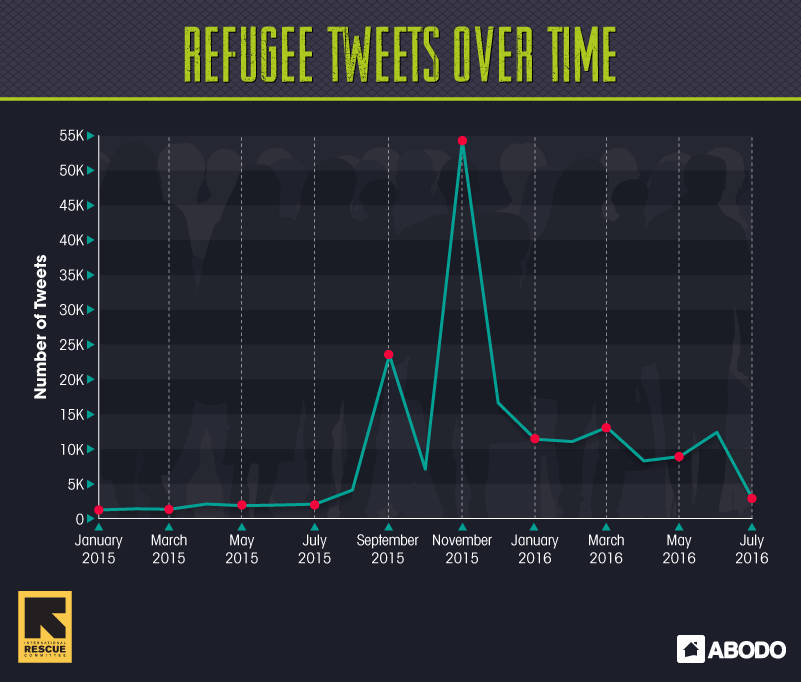 When we look at refugee tweets over time, a fascinating story emerges. Up until July 2015, there was not much discussion about refugees over Twitter. However, from August 2015 to September 2015, there was a substantial spike in tweets — about a 471% increase. Even more incredible, from October 2015 to November 2015, there was a roughly 663% increase in tweets. Most likely, these tweets were in response to the peak of the Syrian crisis. According to the Human Rights Watch, over 800,000 immigrants and asylum seekers had reached Italy and Greece by mid-November 2015. At the time, America found itself having to decide whether it would take in some of these refugees.

And as quickly as those tweets increased, they decreased just as rapidly. From November 2015 to December 2015, there was a 69% decrease in refugee-related tweets. Since then, refugee tweets have continued to decrease for the most part.

TIMELINE OF POSITIVE-SENTIMENT TWEETS ABOUT REFUGEES 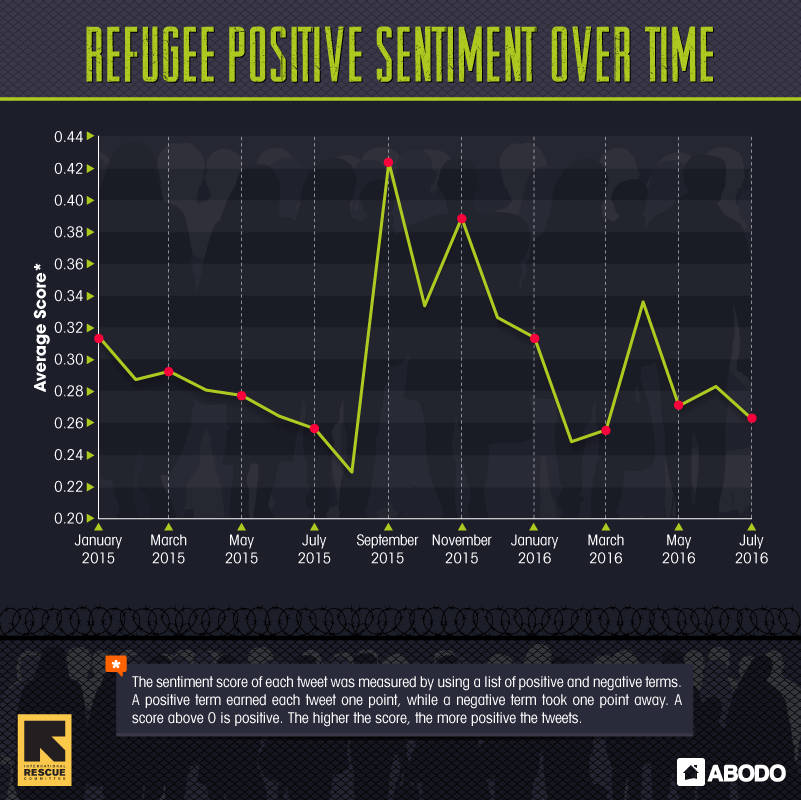 Finally, we looked at just positive sentiment toward refugees on Twitter over time. At first glance, it’s apparent the timeline looks much different. From January 2015 to August 2015, the average score decreased 27%. Then it jumped again from August 2015 to September 2015 (about 85%).

A possible reason for this increase in positive sentiment might have to do with the tragic death of Alan Kurdi, a three-year-old Syrian boy who drowned while trying to reach his family in Canada. The widely publicized images of his body washed up on a Turkish beach might have evoked strong emotions in Americans — it could have been anybody’s child.

Although refugee-related tweets steeply declined after September in the preceding chart, positive sentiment didn’t necessarily fade away. There was another spike between October 2015 and November 2015, and again between March 2016 and April 2016.

GIVING A HOME TO THOSE IN NEED OF A HOME

It’s a comforting thing to know that despite so much bad in the world, people still care. When it comes to refugees, Americans are paying attention. And while they can’t change policies themselves, they are taking to Twitter to let the world know of their support.

States like Washington and Maine were shown to have the most positive refugee-related tweets, while cities like San Diego and San Francisco tweeted their support as well. Over time, positive sentiment increased dramatically in September 2015 and has spiked a couple of times since. All in all, many Americans remember why this country was founded in the first place and are extending this virtue to those who currently need it the most.

We encourage you to share the images on this page freely. If you choose to do so, please give credit to the authors by linking back to this page. We would love for readers to be able to learn more and find related research.