Rentable’s Cost and Opportunity series has so far helped you weigh the best cities for tech and health care jobs. This month, we turn to one of the most visible industries: arts, media, and entertainment. According to the Bureau of Labor Statistics’ occupation breakdown, these workers are your TV news anchors, photographers, sound engineers, film editors, musicians, dancers, designers, journalists, actors, athletes, and everything in between, including public relations and communications specialists.

The areas with the most opportunities in this category are typically large metropolitan areas, largely due to existing industry ties and infrastructure. Hollywood, for example, is inextricably linked to the film industry, so it’s no surprise that the Los Angeles-Long Beach-Glendale, CA, area has the highest concentration of arts, media, and entertainment jobs, with nearly 36 out of every 1,000 jobs in that industry.

New York-Jersey City-White Plains, NY-NJ; San Francisco-Redwood City-South San Francisco, CA; and Washington-Arlington-Alexandria, DC-VA-MD-WV — rich in PR specialists and journalists following the District’s politicians — aren’t far behind, with 24 to 26 out of every 1,000 jobs in the arts and media field.

But access to job opportunities isn’t the only factor to consider when you’re relocating for a career — you also need to balance your potential earnings with your potential housing costs. To make this easier, we’ve created our own formula to score 76 MSAs nationwide on a weighted balance of median one-bedroom rent, median arts and media worker salary, and job density. 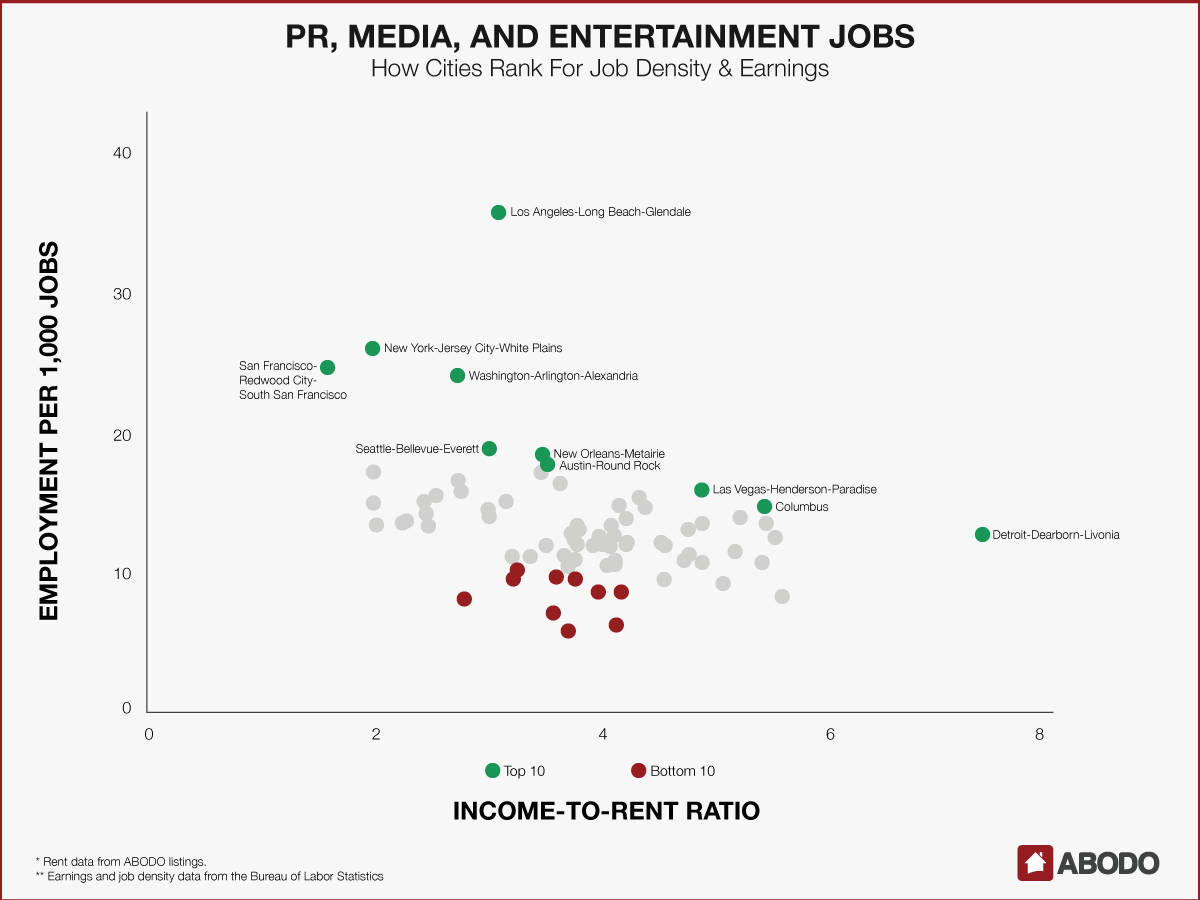 As it turns out, the Los Angeles area is still the entertainment job-seeker’s best bet. The City of Angels’ score of 8.2 is the highest in the country by a margin of nearly three points, largely due to extraordinary arts and media job density. Entertainment and media workers in LA earn a median salary of nearly $63,000 and pay about $1,690 in monthly rent, which earns the MSA an income-to-rent ratio of 3.1. The runner-up, the New York area, has a ratio of 1.99, meaning those professionals are just short of earning twice as much in a year as they’re potentially spending on rent.

Washington, D.C and San Francisco also hold their spots near the top of the list, with Detroit-Dearborn-Livonia, MI, right on their heels, with a total score of 4.7 and a phenomenal income-to-rent ratio of 7.4. New Orleans-Metairie, LA (4.2); Las Vegas-Henderson-Paradise, NV (3.9); Columbus, OH (3.9); and Seattle-Bellevue-Everett, WA (3.9) round out the top 10, with Austin-Round Rock, TX (3.8), and Madison, WI (3.6) narrowly missing the top spots.

Another Texas city, Corpus Christi, didn’t quite fare as well, landing in last place with a total score of .9. Riverside-San Bernardino-Ontario and Bakersfield, CA, also linger near the bottom, barely breaking a score of 1.

We used 2015 data from the U.S. Bureau of Labor Statistics on employment per 1,000 jobs and median annual wages for all arts, median and entertainment occupations by metropolitan statistical area and paired it with Rentable data on median 1-bedroom rent prices. To calculate the income-to-rent ratio for each MSA, we divided the median annual wages by 12 to get a median monthly wage, then divided the result by the current median 1-bedroom rent price for the area. We then scaled both the employment per 1,000 jobs and the income-to-rent ratio to give each a relative value between 0 and 10. The final score is a weighted sum of the scaled values, with employment per 1,000 jobs carrying a 75% weight and income-to-rent ratio 25%.