Better safe than sorry. Your mom probably yelled those words as she chased you down the street, bicycle helmet in hand. But the phrase becomes less playful when you consider this: A violent crime occurs once every 26 seconds in America. Maybe it’s time to get serious about safety after all?

Would you be worried if you knew that people tweeted about rape three times as often in your town than in the neighboring one? What if terms like “meth lab” or “drive-by” appeared more commonly in your city than anywhere else in the country? Whether you see infractions or not, they’re happening – and people are talking about them.

To find out where people were talking about crime the most, we scoured 18 months’ worth of geotagged Twitter posts for crime-related words. We collated these findings into maps and charts showing the cities and states with the most (and least) mentions of misdeeds. Where does your region rank? Keep reading to find out. 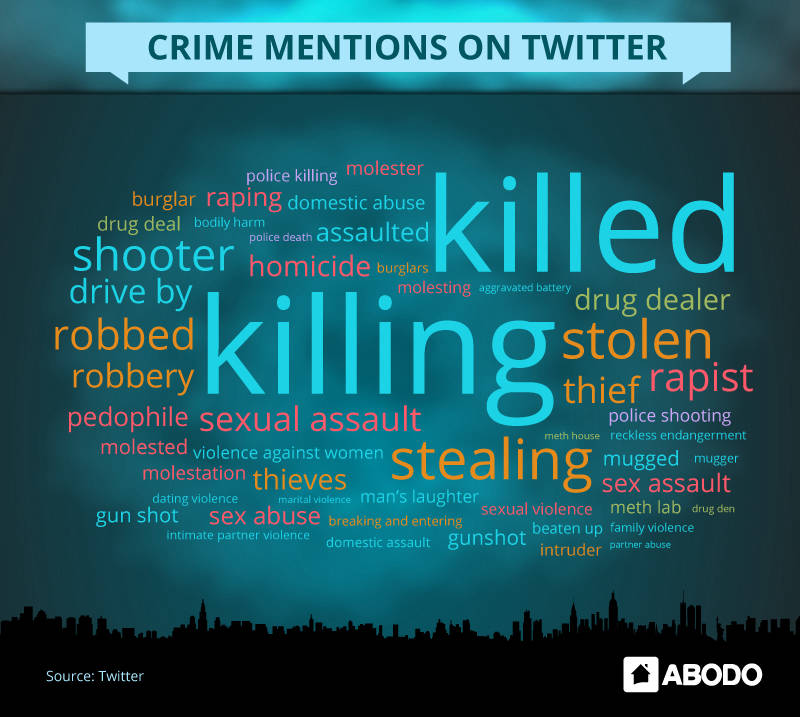 We searched tweets for over 50 crime-related words and phrases ranging from the broad, like “assaulted,” to the more specific, like “violence against women”. Overall, the words “killing” and “killed” were by far the most common crime-related terms on Twitter. They occurred about six times more often than the next contenders, “stealing” and “stolen” – possibly because the term “kill” is used so often in a slang or non-literal sense.

No one wants to hear that their neighborhood is awash with tweets about homicide, but you can rest assured that the actual statistics on crime show almost the exact opposite picture from Twitter. In actuality, it’s property crimes like theft and burglary that are occurring approximately six times more often than violent crime in the United States. 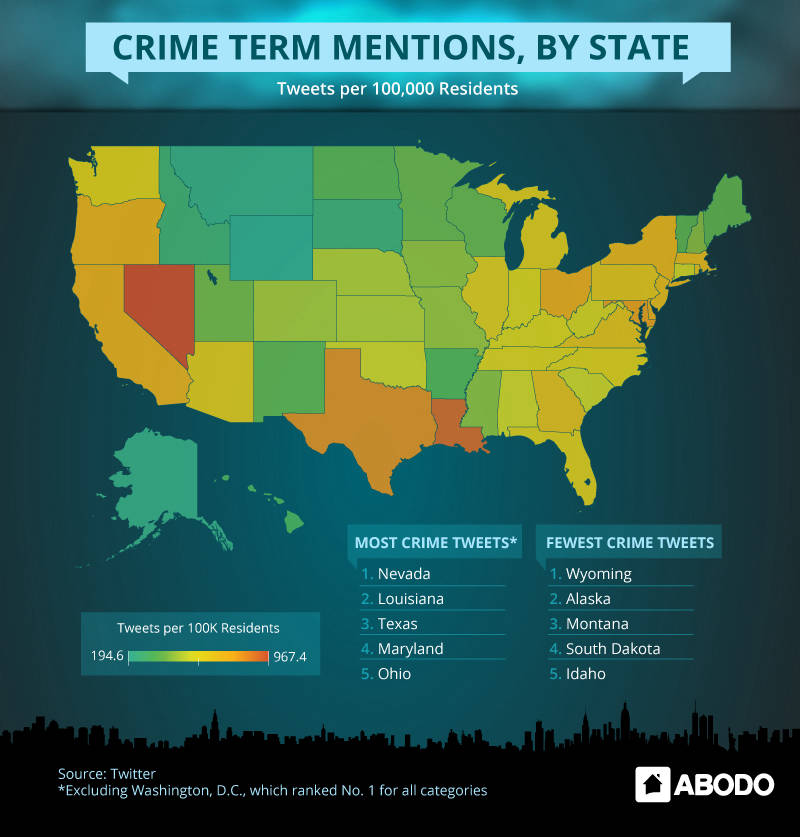 Crime tweets revealed that the top state, Nevada, posted crime terms at nearly five times the rate of bottom-ranking Wyoming. And, at 967 crime-related tweets per 100,000 residents, that’s nearly 1 crime tweet for every 100 people in Nevada. If you’re wondering whether drug- and alcohol-fueled Sin City has anything to do with Nevada’s ranking, it’s likely. Las Vegas has a violent crime rate that is 59% higher than the national average.

It’s important to note mentions on Twitter don’t necessarily correlate with actual crimes being committed – and may actually refer to crimes occurring in other cities, states, or countries. However, Nevada does in fact rank No. 2 in the nation for violent crimes. You’ll have to take that with a grain of salt, however, because Alaska, which ranks in the bottom five for tweeting about crime, is in fact the nation’s No. 1 most violent state, with 635 violent crimes per 100,000 people per year. 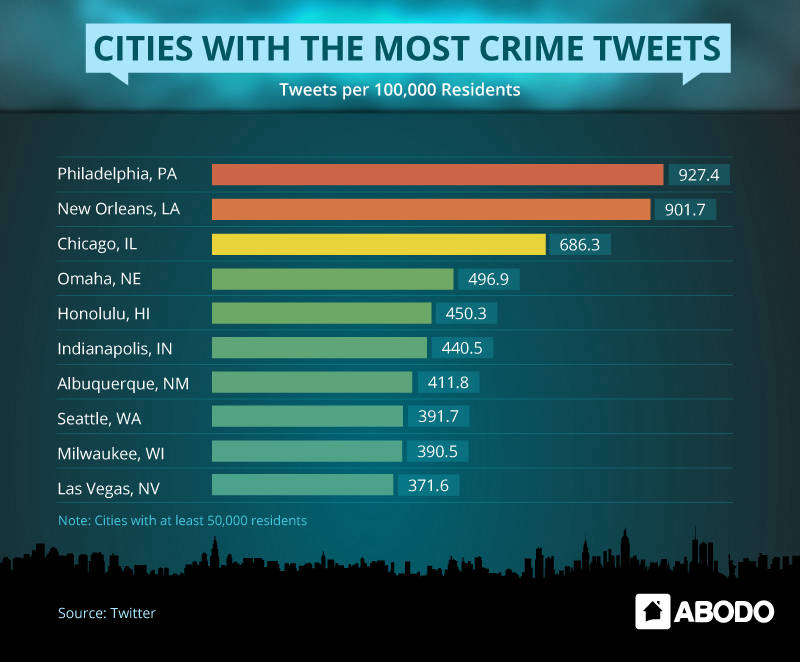 Interestingly, crime-tweeting cities don’t overlap with crime-tweeting states except in one instance: Like Louisiana, New Orleans takes second place for Twitter crime mentions. Philadelphia claims the top spot. Although crime tweets don’t necessarily reflect actual crimes committed (or may reference crimes occurring in other areas), the two cities have something in common: Both Philly and New Orleans have seen unfortunate increases in their homicide rates in recent years. For example, the City of Brotherly Love recorded 277 murders in 2015 (a 12% increase year over year); the same statistic jumped to 15% for the Big Easy. 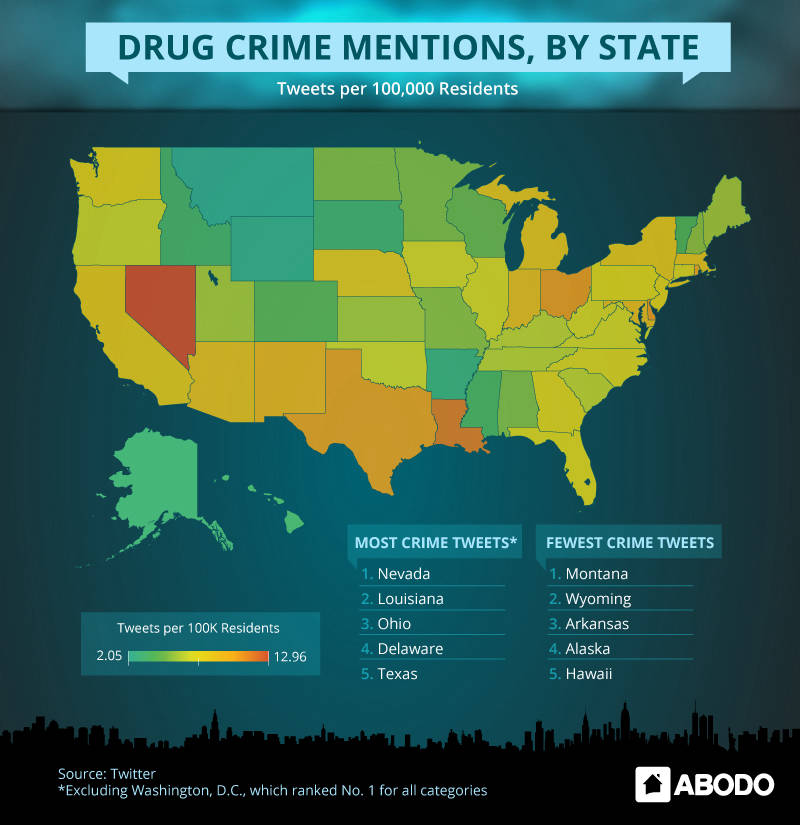 Here’s a breakdown of only those that are breaking bad (with drugs, that is). Four of the top 5 states from the overall crime mentions map (Nevada, Louisiana, Ohio, and Texas) remained when the focus shifted to drugs. Delaware replaced its neighbor, Maryland, at No. 4.

Montana, Wyoming, and many other Northern states recorded significantly fewer substance posts. Nevada tweeted about drugs more than six times as often as Montana when adjusted for population. Looking at the map as a whole, it’s clear that many of the top drug-tweet tallies occur in the Southwest. This is in line with the National Drug Intelligence Center’s (NDIC) findings as well: A vast majority of illicit substances enter the United States on land through the Mexican border.

Recreational marijuana is legal in four states (Washington, Oregon, Colorado, and Alaska) and Washington, D.C. None of these spots ranked in the top 5 for tweets mentioning drug crime terms such as “drug deal” and “drug dealer.” Alaska actually ranked in the bottom 5. And along with fewer drug tweets, marijuana legalization can lead to a decrease in violent crime and a massive drop in marijuana arrests. 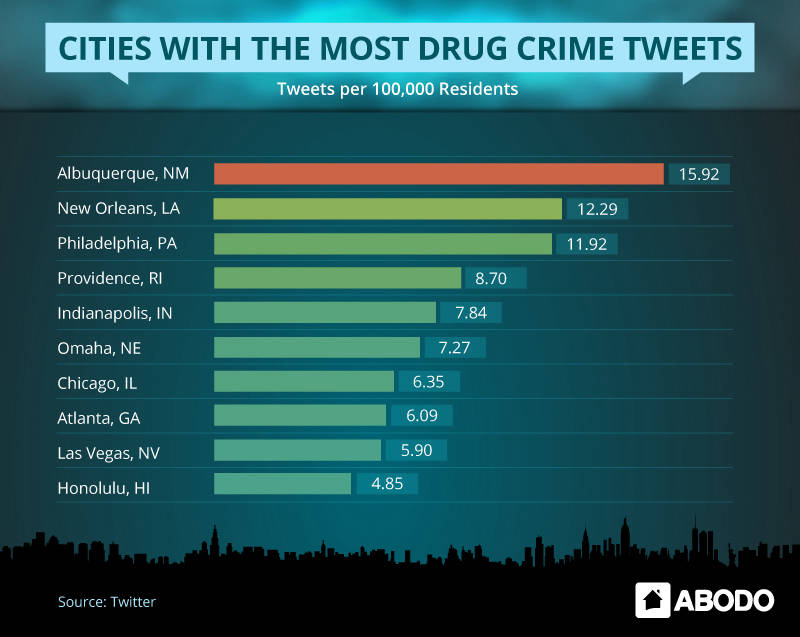 Albuquerque, NM, holds the dubious distinction of being the city that most frequently tweets about substance crime. The NDIC declared New Mexico a high-intensity drug trafficking area – and in 2014 more New Mexico residents died from drug overdoses than during any other year on record. Following close behind in terms of drug crime tweets is New Orleans, where officials are grappling with a major heroin epidemic they say has led to an increase in violent crime and gun violence. 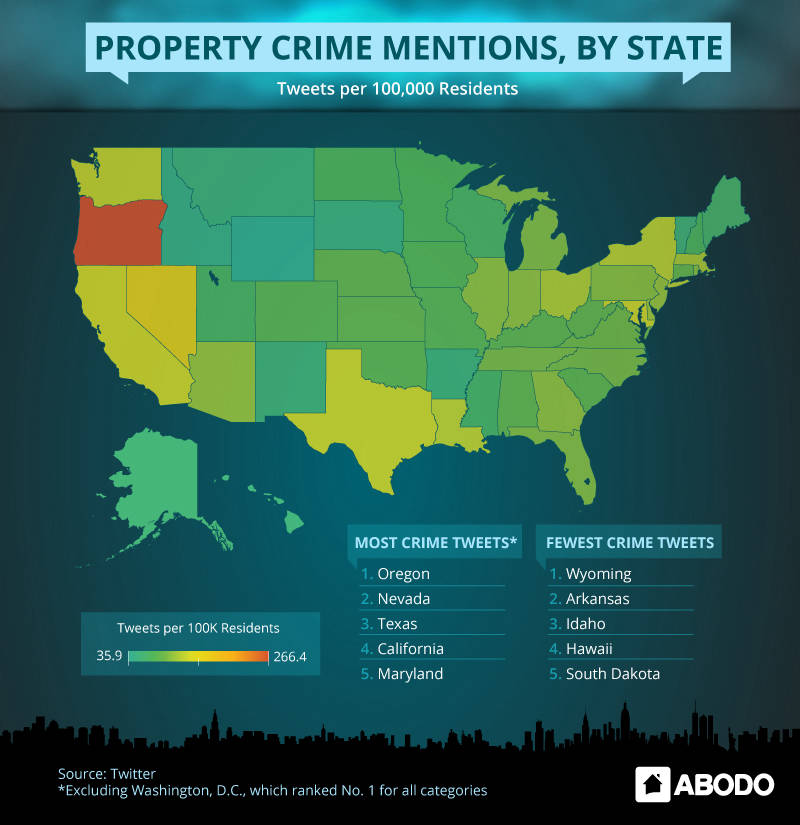 Property crime is a broad category that can include burglary, larceny, theft, motor vehicle theft, arson, shoplifting, and vandalism. (These crimes are only considered as such if the victim was not harmed or threatened in the process.) Looking at the map above, one thing is clear: Oregon may not actually suffer from greater rates of property crime compared with other states, but it sure does talk about it more. In fact, the West as a whole appears to post the most about these types of crimes despite the fact that the South actually suffers from the highest property crime rate as a region, with a little over 3,000 crimes committed per 100,000 residents, or 1 for every 33 people. 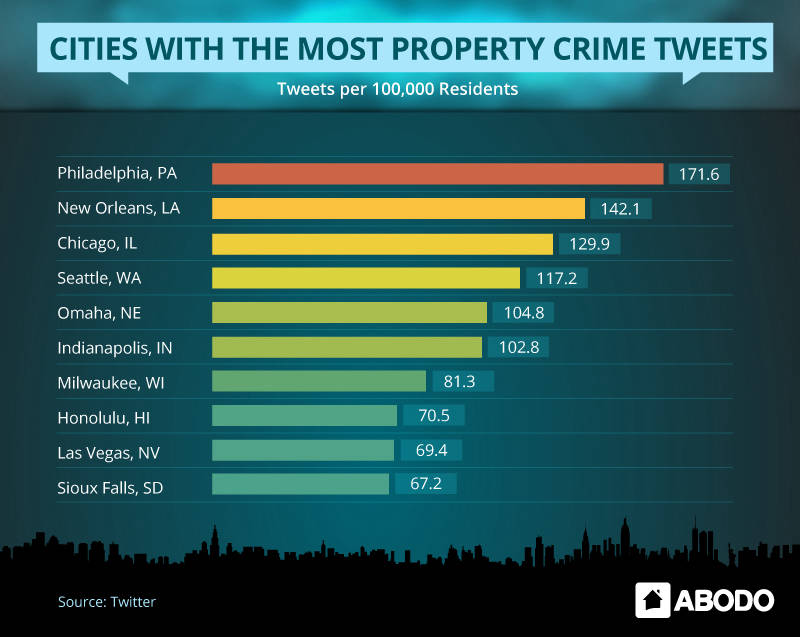 Pennsylvania didn’t make the list of states that tweet about property crimes, but citywise Philadelphia took top billing. Though property crime has reportedly decreased in the city recently (in part thanks to increased awareness and surveillance), people in Philly still tweet about the topic more than any other city. Seattle and New Orleans make sense in the top 10, given that, according to the FBI, Washington State has the highest rate of property crime per 100,000 residents; Louisiana has the fourth-highest. 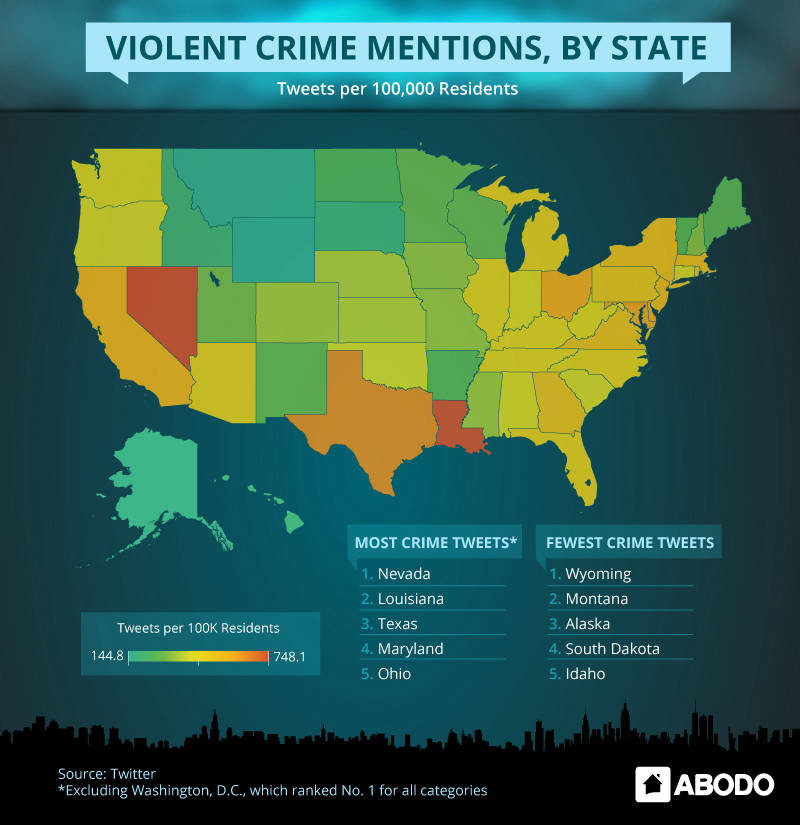 Violent crime includes murder and non-negligent manslaughter, rape, robbery, and aggravated assault – some pretty heavy stuff. Nevada and Louisiana were top tweeters about those topics, which wasn’t surprising given our other results. When looking at the other end of the spectrum, however, we wondered why the bottom states weren’t posting about them.

What is it about Wyoming, Montana, and South Dakota that keeps them in the green? It turns out that these areas may indeed have lower violent crime rates, as evidenced by a study that found that rural regions sustain lower crime rates in nearly all categories as compared with metropolitan areas. And with violent crime specifically, rural areas report almost 3.5 times fewer incidents than their city-dwelling counterparts. 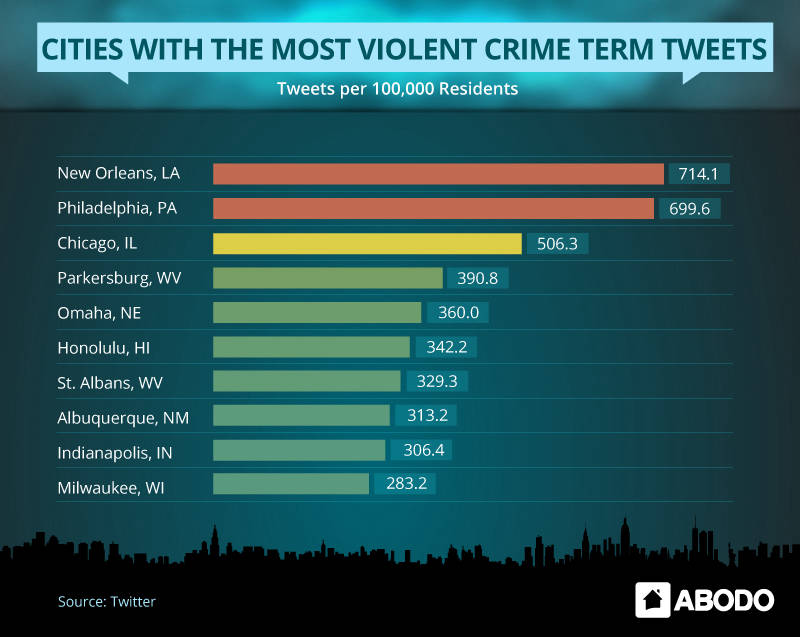 Since we’ve already discussed the high homicide rates in New Orleans and Philadelphia, let’s dig into the data for a few other repeat offenders. Albuquerque, which ranks eighth on the list of cities tweeting about violent crimes, is dragged down even further by its home state, New Mexico, which ranks fourth in the nation when it comes to actually committing them.

Omaha, in otherwise fairly crime-neutral Nebraska, has the highest rate of homicides among black people in the entire country; the related homicide rate is double that of the national average.

And Chicago, which had been making significant strides toward crime rate reduction in recent years, saw a sudden increase in murders in 2015.

When it comes to sex crimes, things are still not looking great for Oregon. This time, the opinion on Twitter may reflect reality: Oregon has the second-highest number of registered sex offenders of any state, and at present only about 2.5% of them have been uploaded and recorded on the state’s website for public viewing. New York, too, has seen more than its fair share of sex crimes recently. New York City alone recorded 540 rapes in the first half of 2015, an 8% increase from the year before. The silver lining? Some experts say that an increase in the reporting of rapes doesn’t necessarily signify an increase in rapes; it could be that more women are simply coming forward to tell their stories.

Zooming in on cities and sex crimes reveals Oklahoma City in first place for tweets mentioning rape, molestation, pedophilia, and other crimes in the category. This is consistent with FBI statistics from recent years, which show the state as one of the highest: the sixth-most for rapes in America.

Eugene is a new addition to the list, though it’s not a surprising one; Oregon topped the list of sex crime mentions by state as well. Furthermore, in 2013 (the last year for which city data were available) Eugene recorded 68 rapes – which was second only to Oregon’s most populous city, Portland.

In addition to searching for mentions of misdeeds on Twitter, we also tracked where people were talking about police shootings, police deaths, and police killings in the same 140 characters.

Our results seem to be consistent with recent incidents. In addition to the deadly shooting of Laquan McDonald by a police officer in Illinois, several Maryland policemen were recently charged with reckless endangerment over the death of Freddie Gray. Another officer, in Ferguson, MO, was also famously not indicted by a grand jury after the shooting of unarmed black teenager Michael Brown. 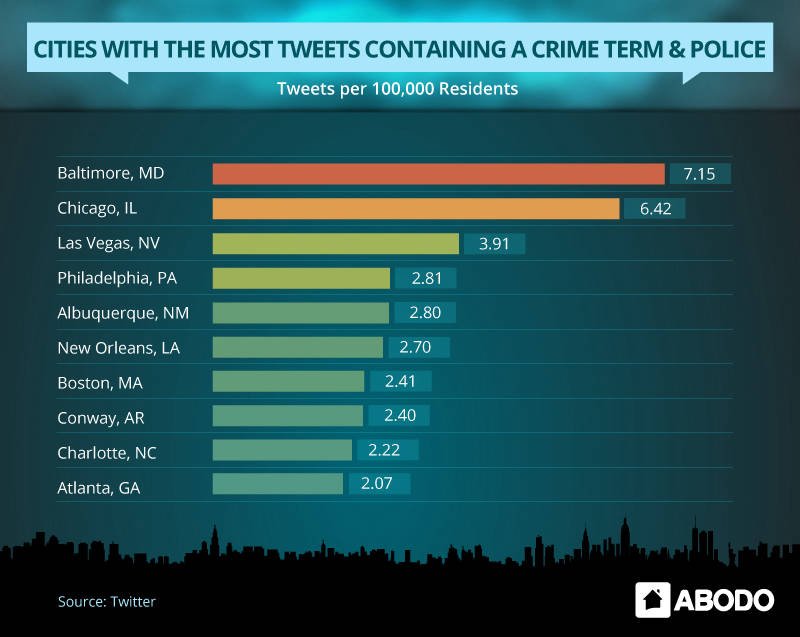 Unsurprisingly, Baltimore and Chicago make the list of cities where cops are most tweeted about with a crime. But it’s more than just killer-cop drama that the cities on this list have in common. Police officers per capita are a noteworthy stat too.

Baltimore, Philadelphia, and Boston all fell well below the national average of number of residents per officer, meaning that there are more cops to go around in those cities. Baltimore, for instance, has 1 police officer for every 220 citizens, making it one of the most heavily policed major cities in the union.

If safety is your No. 1 concern when looking for a new place to live, this should certainly have given you some food for thought. But more than anything, it’s important to remember: Only about a quarter of murders and 38% of assaults are perpetrated by strangers; the vast majority of violent crimes are committed by people associated with the victim. So in the end, it’s not so much about where you are, but rather who you know, that makes the biggest difference to your safety.

We scraped Twitter for tweets in the United States from June 2014 to December 2015, which contained at least one of several crime-related keywords. We then grouped certain terms as they related to crime categories. The search terms used for each category in our analysis were as follows:

For the purposes of this project, Washington D.C. was considered a state. It was excluded from the Most Tweets/Fewest Tweets lists since it had the most tweets in every category.