It’s no secret that Americans love their pets. Pet owners scoop poop, share their beds, and share their money. In the last year alone, Americans spent more than $60 billion on their furry friends. But just how far would pet owners go to keep their four-legged friends safe and happy? Would they save their pooches first in a fire? Would they dress them up in Halloween costumes? Choose their Siamese cats over a significant other?

We surveyed 2,000 dog and cat owners on these topics (and many others) to see how seriously pet owners take their roles as fur parents. Curious about where — and whether — people draw the line in their devotion to their pets? Keep reading!

When it comes down to it, most pet owners value their animals more than they value material possessions. Nearly 9 out of 10 respondents said that they would save their pet from a fire before saving a family heirloom, and 58% said they would pick their pet over their dream home. Most pet owners even value their pets more than they do people — nearly two-thirds admitted that they would choose a pet over a significant other, and more than half would rather resort to cannibalism than eat their own pet. Bon appétit!

Fur moms and dads were more reluctant, however, to put their own health and safety on the line. Although owners were happy to go without food for a day to feed their pet and more than half would lose a finger for their hairy babies, the numbers drop drastically as the stakes get higher.

Just 25% would lose a limb for their dog or cat, and 23% responded that they would give up their own life to save their animal (compare that with the 32% who said they would take someone else’s life, if necessary). Priorities, priorities.

Women may be slightly more likely than men to own pets in the first place, and they consistently spend more money on their four-legged friends than men do. But does that also mean women love their pets more?

Maybe. Women were more willing to part with property, body parts, and romantic partners for the sake of their pets than men were, and women outscored men in nearly every display of devotion. The biggest discrepancies between the sexes came in the areas of money, fame, and internet connectivity, all of which men were about 20% less likely to give up than women. One thing men would be more willing to do? Kill another person to save their pet’s life.

WHICH GENERATION WOULD DO THE MOST FOR PETS?

In days gone by, the stereotypical pet owner may have been a little old lady with a house full of cats or a middle-class family with 2.5 kids and a golden retriever. However, Millennials are shaking up the way we think about fur parents. Today, more Millennials own pets than Baby Boomers do.

But it’s not just about owning pets; it’s about loving them — and Millennials definitely do, perhaps to a fault. Baby Boomers were the most likely to spurn money and fame for their pets, but the younger generation claimed the top spot in many of the extreme categories, including a willingness to kill, die, and sever relationships for them. Just don’t ask them to give up the internet.

DOG AND CAT OWNERS: WHO RULES AND WHO DROOLS?

Dogs may be known for their loyalty and cats for their ambivalence, but where do their owners stack up in the devotion debate? Dog owners claimed more categories overall; they tended to top the charts when it came to losing life and limb for their pets. Cat owners, however, were more comfortable forsaking (and eating) other people if it meant keeping their feline friends around a little longer.

Cat lovers were also more likely to shy away from the limelight, preferring for their pets to claim the fame. (They apparently weren’t particularly concerned, though, about what their cat became famous for — they were also more willing to have their pet dubbed the “World’s Ugliest” in exchange for cash.)

FORFEITING YOUR LIFE FOR FIDO’S, BY REGION 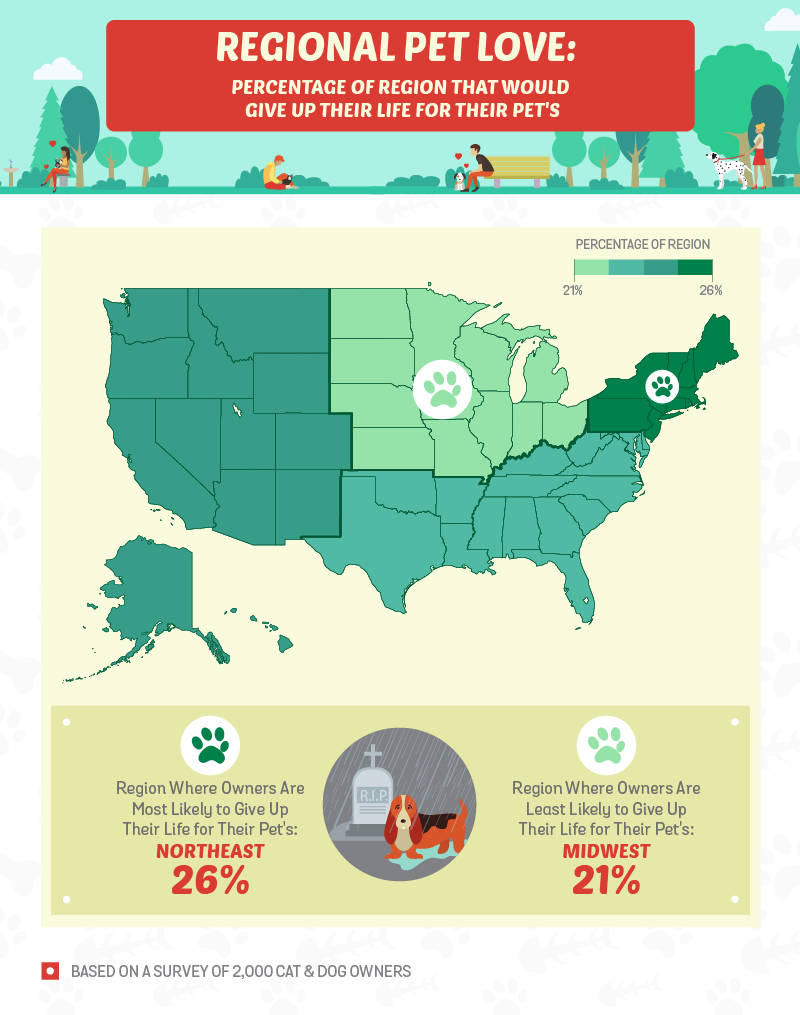 Perhaps no single question can gauge an owner’s devotion better than whether they would die for their pet. In that regard, not all areas of the country are created equal. The Northeast won the pet affection  contest, with 26% of respondents from that region saying they would give their lives for their animals.

The Midwest showed a little less fervor, with only 21% saying their love for their pet was worth sacrificing their life. 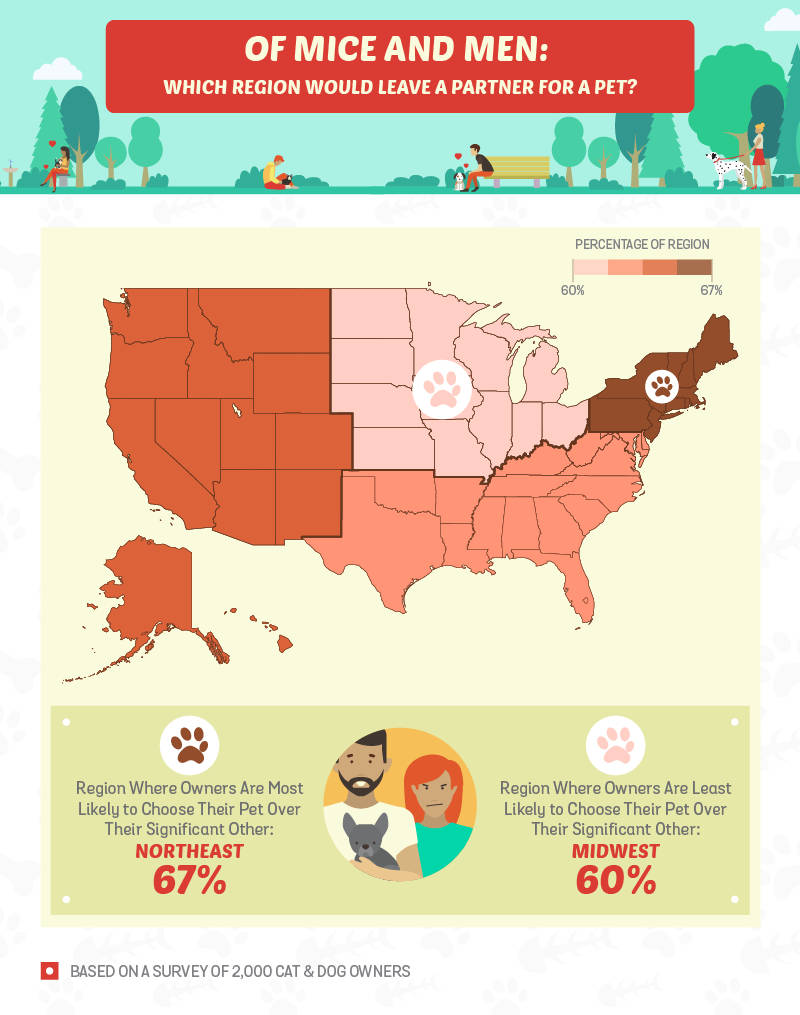 What if it’s your love life that’s on the line? When asked whether people would choose their pet over their significant other, 67% of Northeastern pet owners responded that they would, compared with 60% of those in the Midwest. The rest of the country remained somewhere in the middle.

Although, thankfully, most people will never be asked to choose between a person and a pet, many pets these days find themselves torn between two people. Recent estimates say that close to half of today’s divorces involve the issue of pet custody, and about 1 in 10 disputes turn ugly over the issue.

WHY DO WE LOVE OUR PETS SO MUCH? 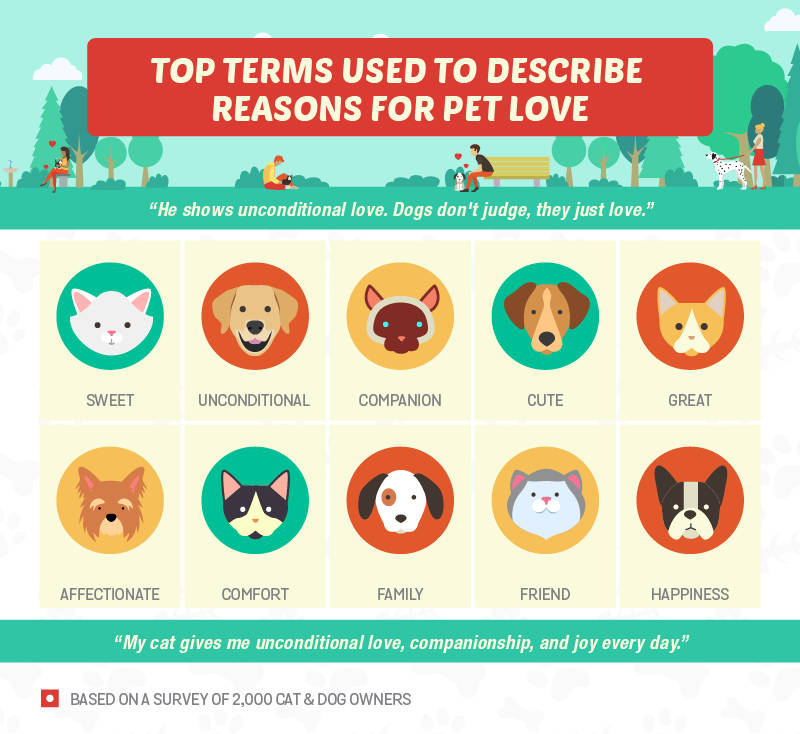 So what is it about our animal companions that makes us so willing to jump into boiling water, shun fame and fortune, and even give up our lives for them? We asked pet owners exactly that question, and their answers were as unique as their four-legged friends. And according to Pet Bibles, “animal companions are more likely to hold a special place in our hearts than even very close human friends.” This is something that cannot be overlooked.

Our affection will probably never be tested in the ways that our survey respondents were, most of us would do just about anything for our favorite furball. Our pets hold a special place in our hearts and homes, which is why it’s important to treat them well and always keep an eye on them. (Lost pet apps like PawMay can help with this.)

At Rentable.co, the perfect home for you and your pet is just a few clicks away. You can choose from over a million apartments across the country, and with our search filters, you’ll never have to choose between your place and your pet.

You’re welcome to share the images found on this page freely. When doing so, please attribute the authors by providing a link back to this page so your readers can learn more about this project and the related research.