Last month we said, “In our view, loads of stimulus money and a quickly recovering economy equal inflation danger, and that alone will put upward pressure on one- and two-bedroom rental prices,” and that’s exactly what we saw in May.

National median one- and two-bedroom apartment rent prices both rose in May as one-bedroom units gained 0.62 percent to a median $1,131 while two-bedroom spaces gained 0.36 percent to $1,387. We also saw more pronounced movement—especially in our two-bedroom increasers. 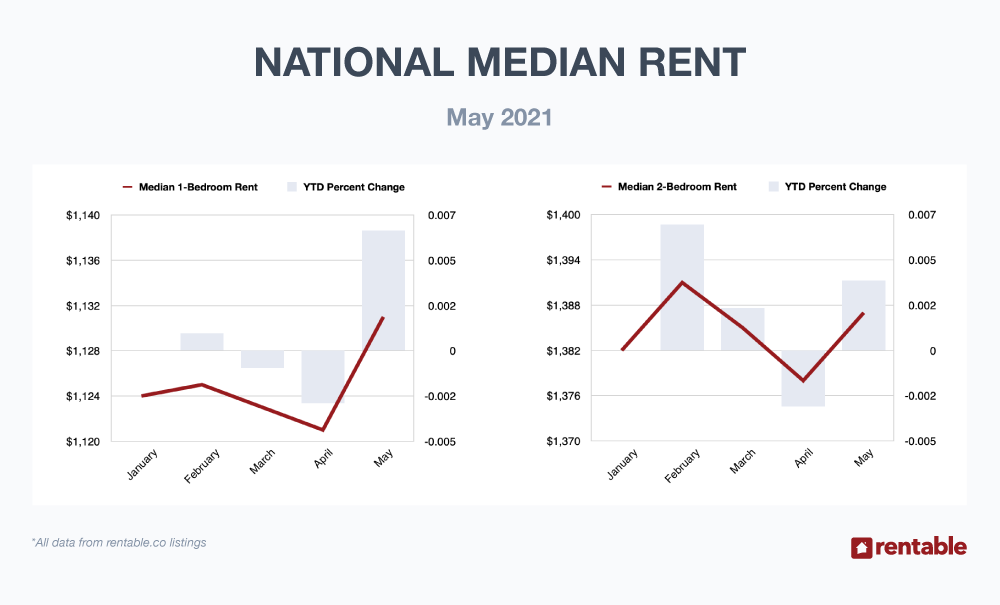 Our top-ten gainers did remain in a tight range as less than 4 percent separated the first-place city from the last, but the losers list was more active as greater than 5 percent divided the first locale from the tenth.

As in April, Norfolk, VA led our one-bedroom gainers list with a 6.87 percent gain to a median $1,166. Dayton, OH followed with a 5.65 percent gain, but price gains on our list after those two cities were more subdued.

The most expensive one-bedroom on our gainers list was Richardson, TX at $1,352 while the most affordable was Dayton, OH at $711. 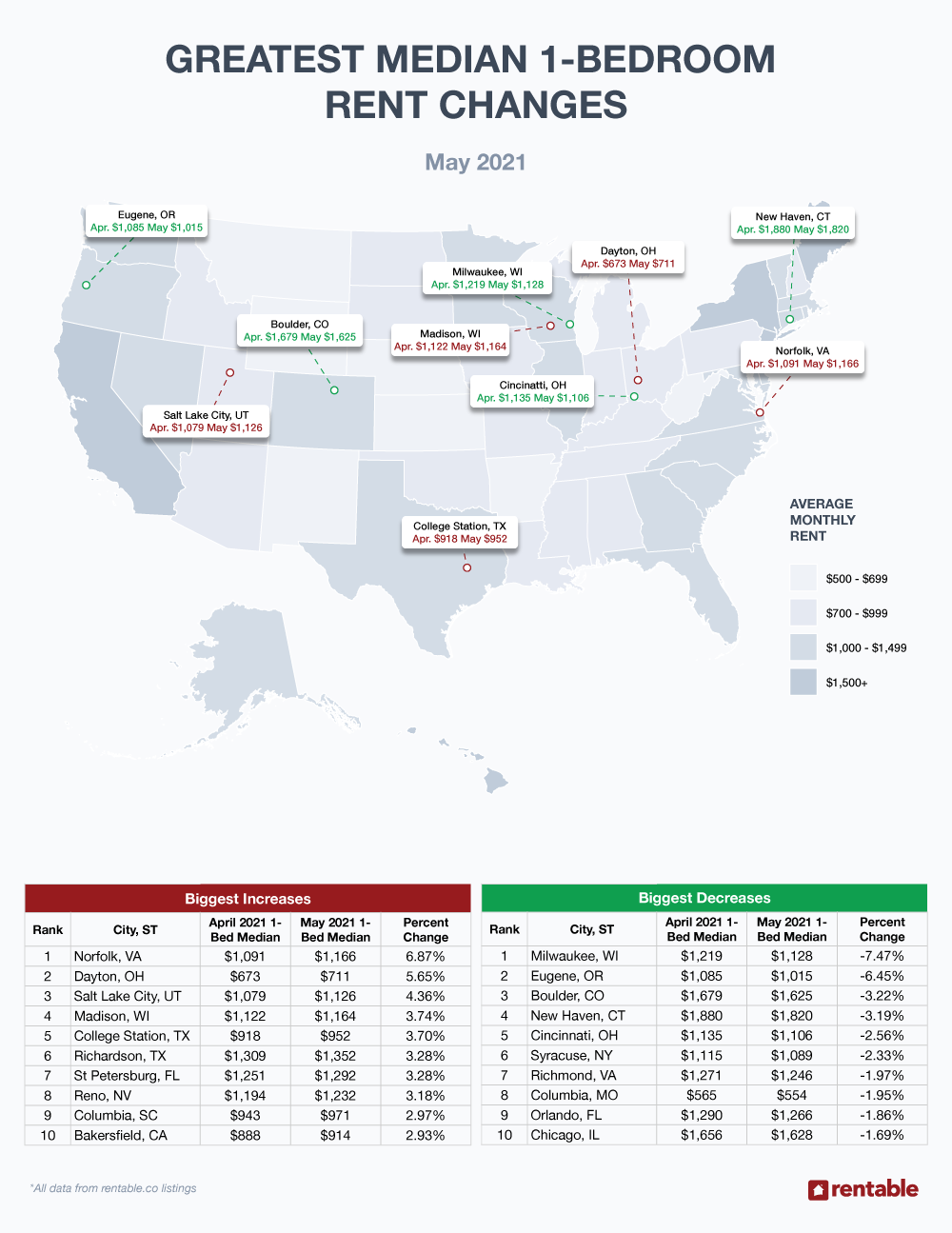 Midwestern gem Milwaukee, WI topped our top ten one-bedroom median rent decreasers list with a loss of 7.47 percent to $1,128, Eugene, OR fell again in May with a loss of 6.45 percent, and Boulder, CO took third place with a 3.22 percent loss. New Haven, CT was close behind with a 3.19 percent drop to $1,219.

Again, of note, San Francisco, CA was absent from our top ten losers as that city continued to experience post-pandemic rent consolidation.

Those looking for pure value should head to Columbia, MO where a one-bedroom apartment rented for an amazingly low $554—less than a May weekend rental car in some cities. Boulder, CO was the priciest one-bedroom on our losers list at $1,625.

In May we saw big price spreads in our top ten gainers, while we noticed that the top ten losers’ ranges were more compact. Almost 7 percent separated the first and last place cities on our gainers list, but our decreasers reported a gap of a little more than 3 percent.

Syracuse, NY led the gainers with a big upward move of 10.26 percent to $1,462 while New Haven, CT placed second on our list rising 6.76 percent. That means New Haven was up over 10 percent if April and May moves are combined. Rochester, NY added a healthy 5.89 percent and Glendale, AZ gained 5.68 percent at a median $1,320.

Springfield, MO was the cheapest two-bedroom median rent on our losers list at $913, while Sacramento, CA took the prize for the priciest at $1,870. 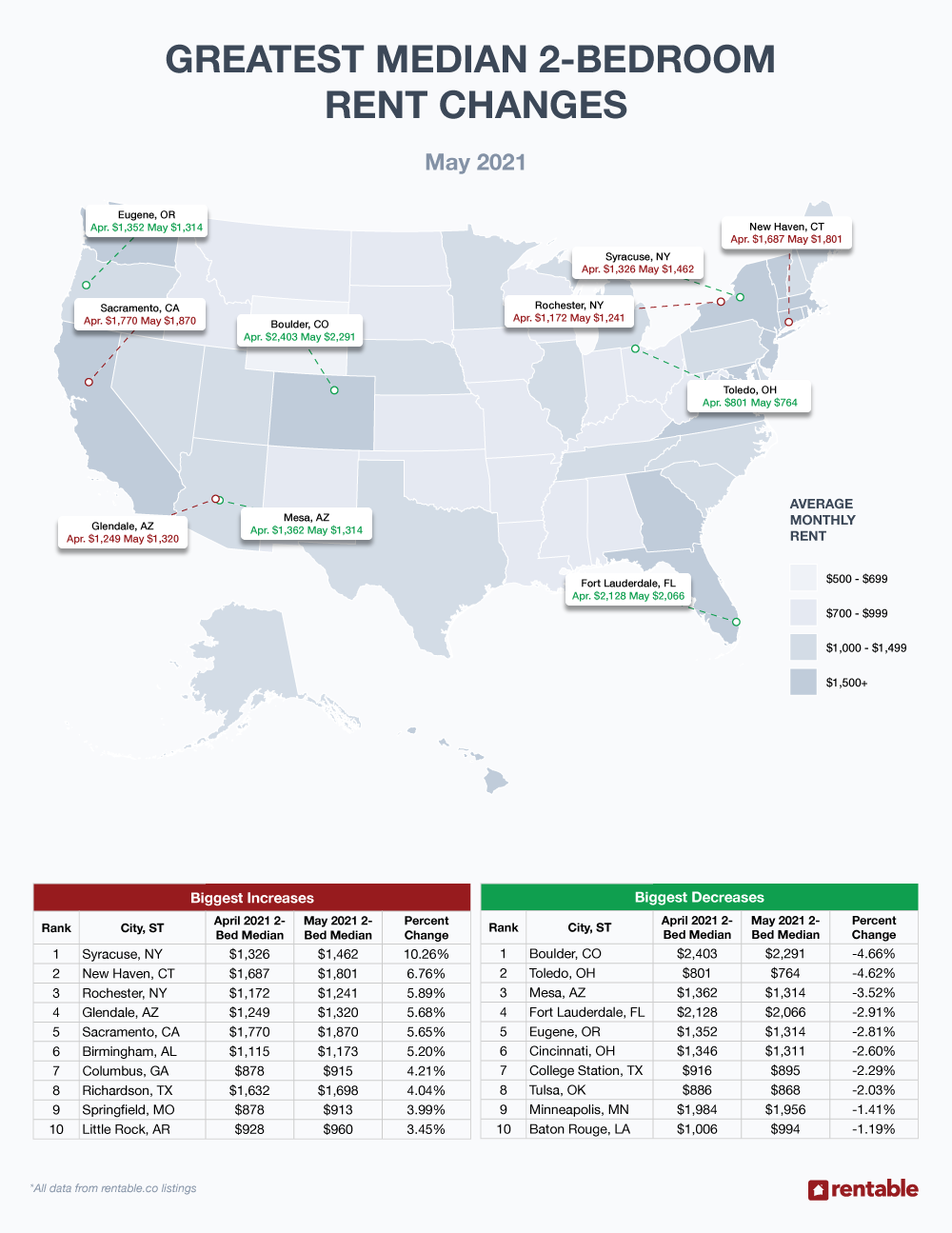 Toledo, OH was a great two-bedroom value at only $764, and Fort Lauderdale looked very expensive at $2,066.

Only a month ago, Covid-19 vaccinations could be difficult to obtain. Now, as if signaling the end of the pandemic, vaccination supply is greater than the demand—at least in the U.S.

Stock indices hover at record highs and the price of oil—given up for dead not long ago—is comfortably above $60, a spot where almost all U.S. producers can make money.

Businesses, like car rental companies, that were struggling to survive just a few months ago are now battling to meet demand. This situation has resulted in price imbalances as commodities like lumber have posted huge increases.

Retail investors have added a shot in the arm to stocks, and they seem fearless about market volatility and corrections.

The current economic scenario looks a little iffy to us, however, and when we see the inevitable crash, apartment rental price increases may come to a quick halt. For now, though, we look for near-term apartment rental prices to trudge upward. Check back with us next month as we check out June rent price trends.