National median one-bedroom apartment rents actually fell 0.09 percent in March to a median $1,123 and two-bedroom units gained a tiny 0.22 percent to a median $1,385 No city moved more than 9 percent in any of our top ten loser and gainer lists—a strong indication of a lackluster market as double-digit gainers and/or losers were not apparent.

Notably, for the first time in seven months, we did not see San Francisco, CA on any of our lists.

Let’s look at March in detail: 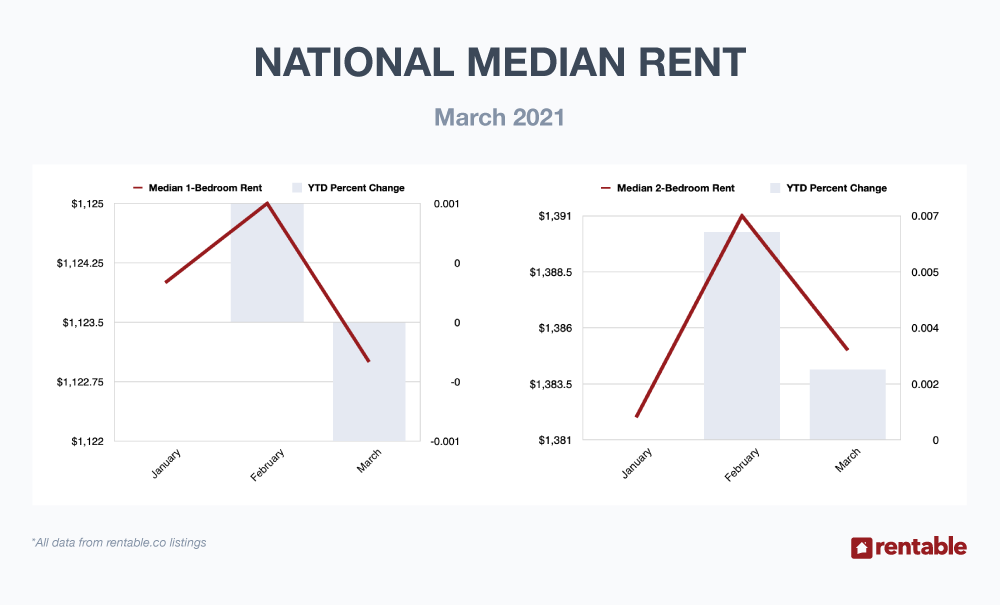 Our top-ten gainers stayed in a tight range as less than 3 percent separated the first-place city from the last. The losers list range was also muted as just a little more than 4 percent separated our first and last place cities.

Bakersfield, CA led our one-bedroom gainers list with a solid 8.51 percent gain to a median $842. College Station, TX followed with a 7.83 percent gain on top of last month’s 6.34 percent gain.

The most expensive one-bedroom on our gainers list was surprisingly Detroit, MI at $1,553 while the most affordable was again Toledo, OH at $638. 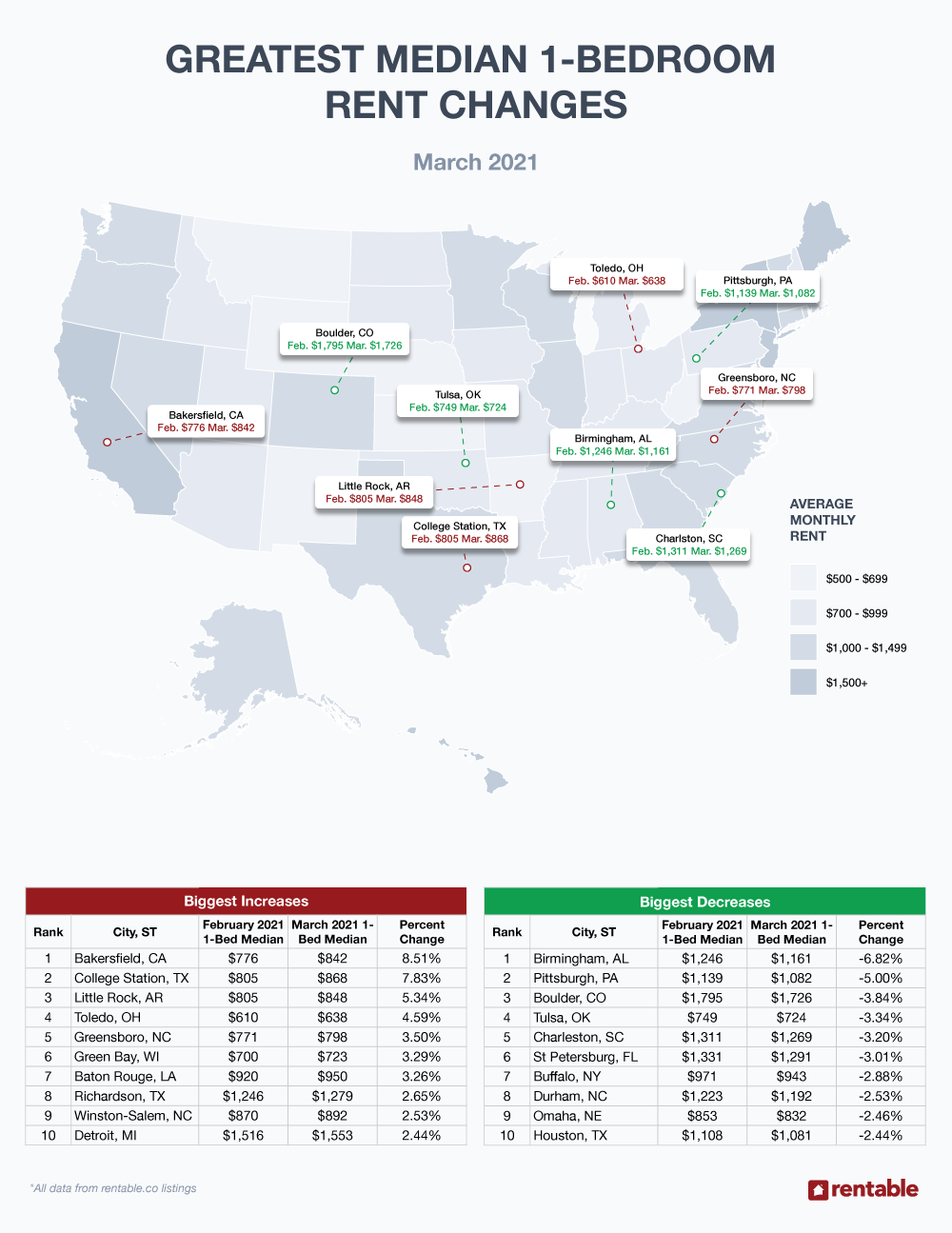 Those looking for pure value should head to Tulsa, OK where a one-bedroom apartment rented for an affordable $724. With San Francisco, CA off of this list, St. Petersburg, FL became march’s most expensive one-bedroom median unit at $1,291.

We saw tight ranges in both our 2-bedroom gainers and losers lists. Just over 3.5 percent separated the first and last place cities on our gainers list, and our decreasers reported a record low spread of less than 1.42 percent. Again, this means that the market is not moving with any strength in either direction.

Springfield, MO was the cheapest two-bedroom median rent on our losers list at $853; Detroit, MI took the prize for the priciest at $1,745. 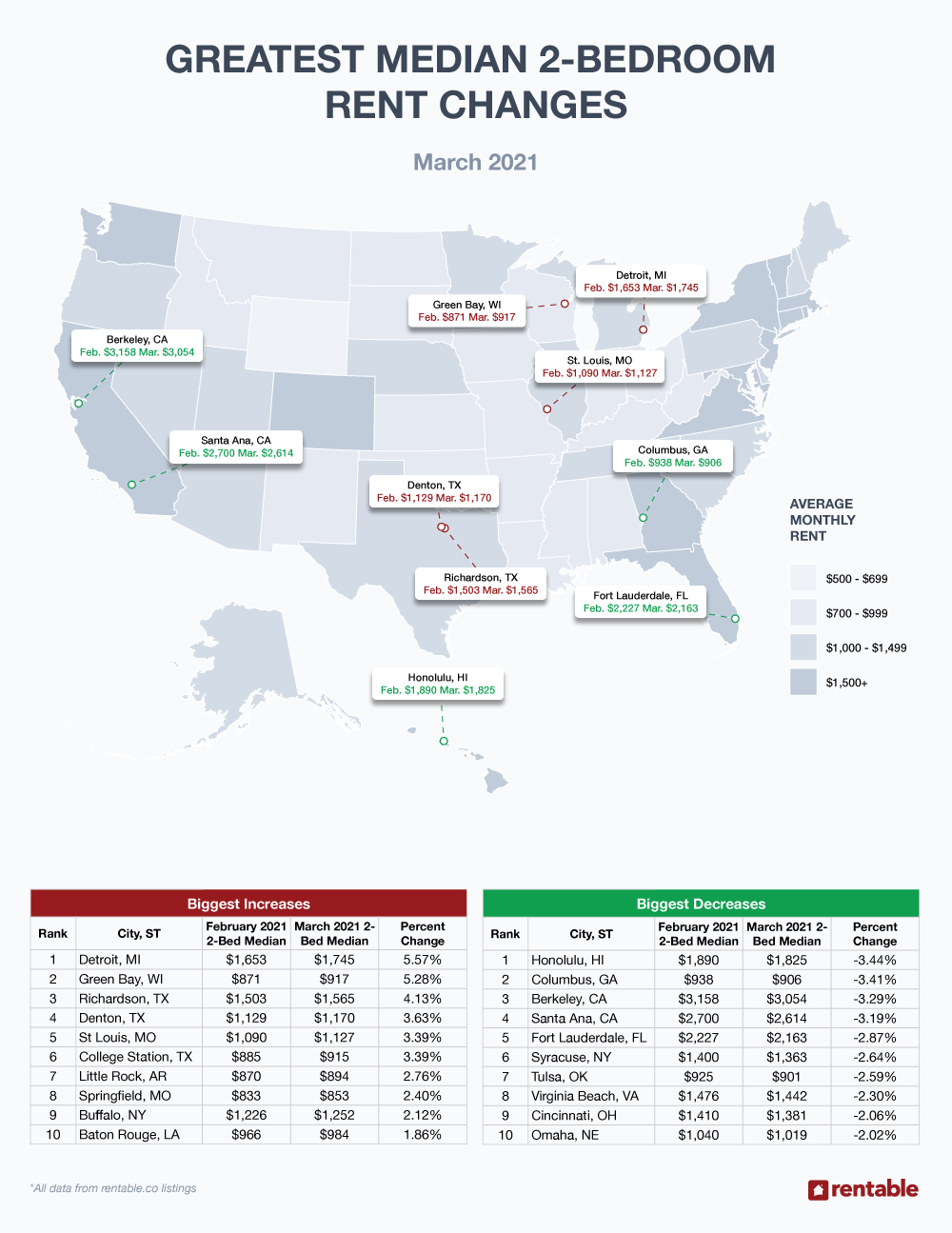 The stock market showed signs of both frothiness and weakness while the long-suffering bond market attempted to rally. Oil prices remained over $60 per barrel, and energy-rich Texas ran out of gas (natural, that is), as a late seasonal Arctic air intrusion lunged the state into darkness as the power grid came perilously close to complete failure. COVID-19 vaccine production was on the rise and as of this writing, almost 10 percent of Americans had been vaccinated.

What does all of the above mean for apartment rentals in the coming months? Consider these facts:

While we may not see the trend in earnest next month, we now look for higher rent prices as 2021 moves forward as we feel the factors of inflation paired with better news on the COVID-19 front will put pressure on apartment rents. We’re also paying close attention to homebuying trends, specifically within the Millennial age group, and how sales and prices may impact rentals going forward.

Be sure to tune in next month for our April update.