Last month our prediction was, “If the expanding economy and the concurrent supply-shortage driven price increases continue, we see July rents continuing the upward trend,” and that scenario strongly verified. July one-bedroom units were up a little over 1.4 percent while two-bedroom rose 1.23 percent.

One-bedrooms are now up 3.38 percent for the year and two-bedrooms have gained 2.82 percent. 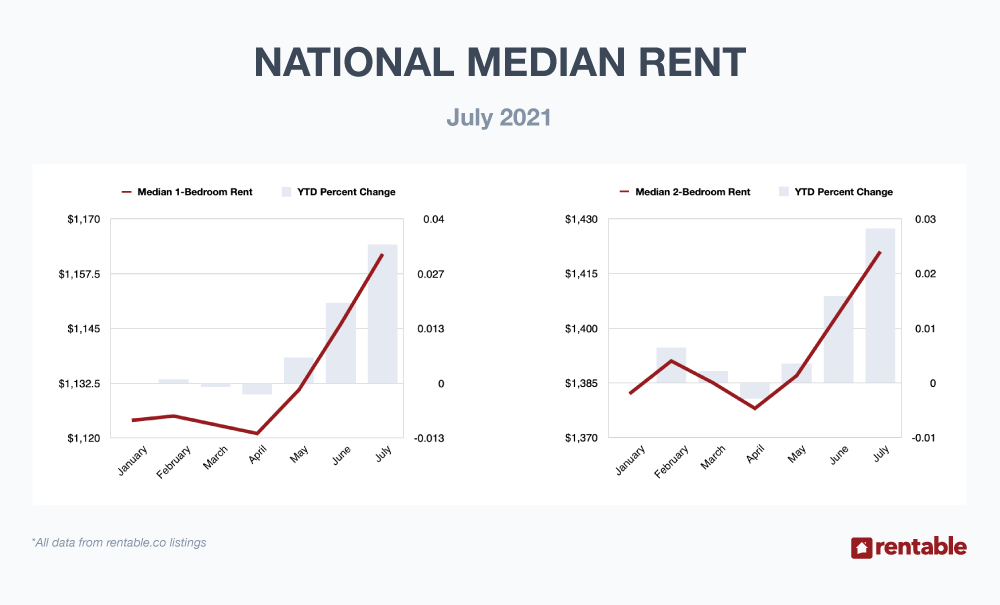 Our top-ten gainers broke out of their tight range as just over 7 percent separated the first-place city from the last, and the losers list was also relatively active as greater than 5 percent divided the first locale from the tenth.

Price gains on our list after those five cities were also more substantial than we have seen in months.

The most expensive one-bedroom on our gainers list was Santa Ana, CA at a median $2,028 while the most affordable was Memphis, TN, barely under the $1,000 mark at $999. 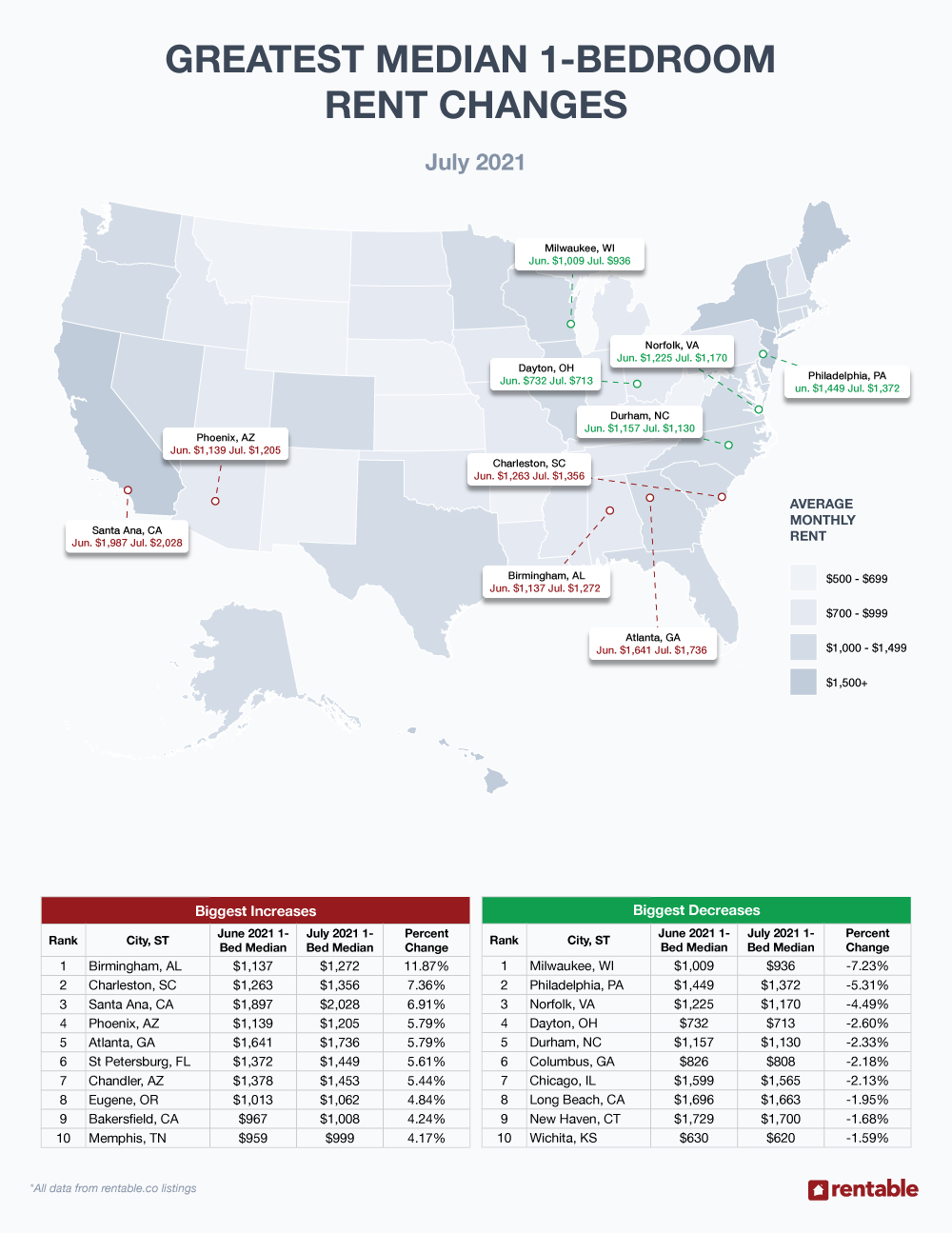 Beery and dreary Milwaukee, WI saw its one-bedroom median rent fall again with a significant loss of 7.23 percent to $936. Philadelphia, PA fell 5.31 percent, and Norfolk, VA took third place with a 4.49 percent loss. Dayton, OH was next, but with a smaller 2.60 percent drop to $713.

Interestingly, San Francisco, CA was again absent from our top ten losers list, continuing to hold its ground after months of serious declines.

Those looking for pure value should head to Toledo, OH where a one-bedroom apartment rented for a pleasantly low $620. New Haven, CT was the priciest one-bedroom on our losers list at $1,700.

In June we saw bigger spreads between the top ten two-bedroom gainers versus the top 10 losers. While more than 4.5 percent separated the gainers from top to bottom, the losers were more consolidated with less than 2 percent separating the worst from the first. Remember, understanding these numbers will be hugely helpful in knowing what you can afford each month.

Half of our top ten two-bedroom gainers were in Arizona, and we’ve never seen a single state dominate one of ours lists in this manner.

Memphis, TN posted the cheapest two-bedroom median rent on our losers list at $1,084, while Santa Ana, CA took the prize for the priciest at $2,820. 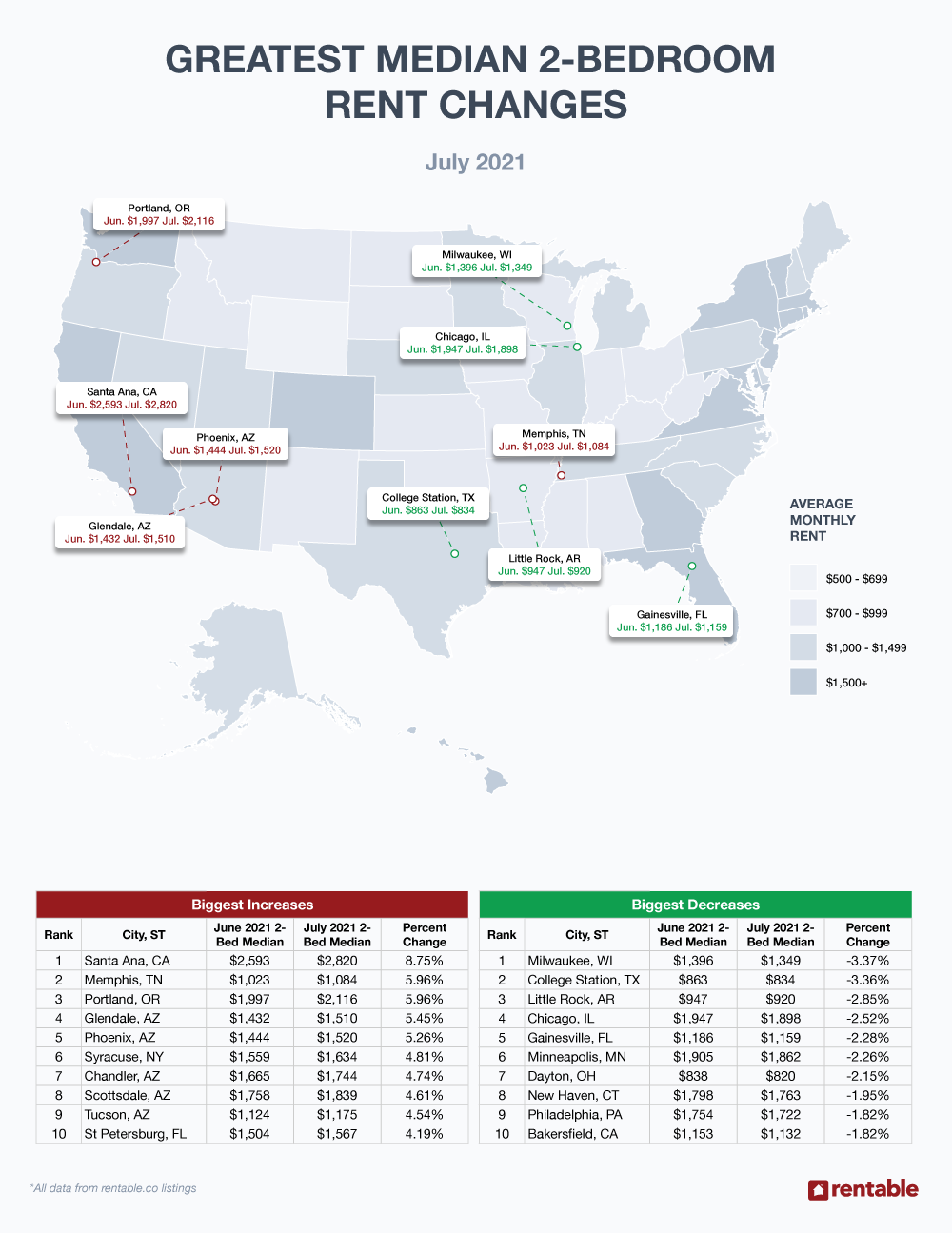 Variants aside, the Covid-19 pandemic seems to be losing its grip in the United States even though vaccination rates continue to lag behind what is considered optimal.

Last month we mentioned that “Inflation has reared its ugly head as consumers experience sticker shock at the grocery store, car dealerships, and big box home supply stores. On top of that indignity, shortages of many products continue to plague the retail landscape. Computer chips are hard to find, and subsequently, partly finished autos are being stockpiled as they wait for component parts that will energize their computers.”

Unfortunately, nothing has changed in the inflation department, and if anything, prices are continuing to quickly move upward. For example, a box of plastic contractor trash bags that cost around $15.00 a couple of years ago are now priced just below $30.00, and examples like that abound.

The laws of supply and demand rule, and with immense post-pandemic consumer demand, prices just keep rising, and this upward pressure continues to spill into apartment rental arena. While the supply and demand issue will eventually balance itself, until we see interest rate increases that may result in a weakening economy, look for summer one and two-bedroom rent prices to escalate.