For the first time this year, we are seeing a bit of July weakness in one-bedroom apartment units while two-bedroom units continued their steady increase.

As we will analyze later in greater detail, our top ten decreasers in both one and two-bedrooms are showing a decelerating trend at sometimes almost twice the accelerating rate of our top ten increasers. In other words, decliners are moving downward more sharply than gainers are trending upward. 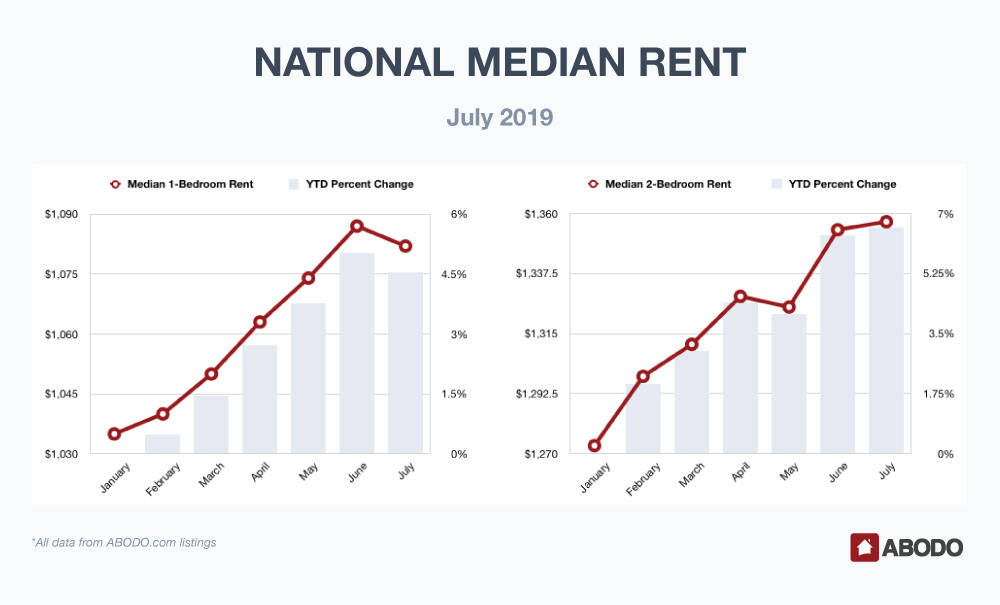 While one-bedroom apartments still show a 4.54 percent yearly increase, they are off the June highs by more than one-half percent, down from a median $1,087 to $1,082.

We sometimes see a wide range of rent increasers with the number one position usually claimed by a city with double-digit increases, but this is not true in July as Athens, GA was the weak winner with only a 6.9 percent gain. Richmond, VA, Cleveland, OH, San Jose, CA and Fort Worth, TX were tightly packed in second through fifth place with increases ranging from 5 to 5.9 percent. In sixth, seventh and eighth place were Salt Lake City, UT, Bakersfield, CA and Columbia, SC with almost identical gains of 4.3 to 4.4 percent. Hot weather favorite Tempe, AZ gained 3.7 percent, and hip Seattle, WA squeaked into the top ten gainer list at number 10 with a 3.4 percent increase.

Only 6.5 percentage points separated the top and bottom cities on our list of rent gainers, and the most expensive place to live on this list was San Jose, CA, at a July median rent of $2,741. 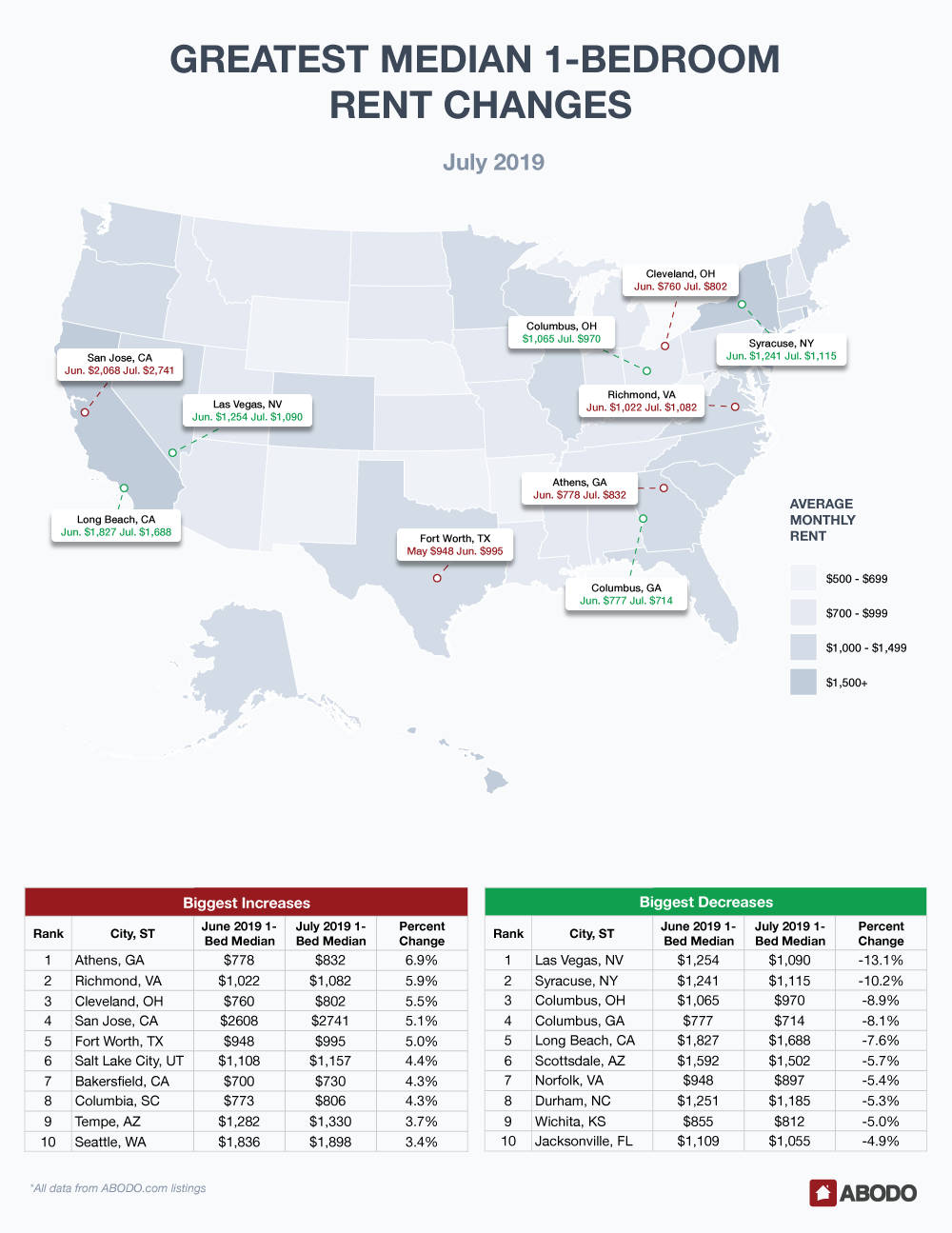 While out top gainer rose by 6.9 percent, our top decreaser fell by almost twice that amount as Las Vegas, NV lost a huge 13.1 percent to $1,090 from $1,254. Syracuse, NY also posted a double-digit loss falling 10.2 percent, and a pair of cities named Columbus—one in OH and the other in GA posted respective 8.9 and 8.2 percent declines. Long Beach, CA was alone in fifth place on the loser’s list with a 7.6 percent drop, and Scottsdale, AZ, Norfolk, VA, Durham, NC and tornado alley champion Wichita, KS saw decreases from 5 to 5.7 percent. Jacksonville, FL moved into tenth place on our list of rent losers with a fall of 4.9 percent to $1,055.

The best bargain on our rent decliner list was Columbus, GA sinking to $714.

Fresno, CA led our top ten gainer list with a 7 percent increase of $1,366. Athens, GA frequently appears on our top ten lists and did not disappoint in July as the city gained 6.8 percent but still stayed under the magic $1,000 mark at $948. Glendale, AZ and Colorado Springs, CO reported similar increases of 5.8 to 5.9 percent while Richardson, TX was alone in fifth place with a 4.7 percent gain. 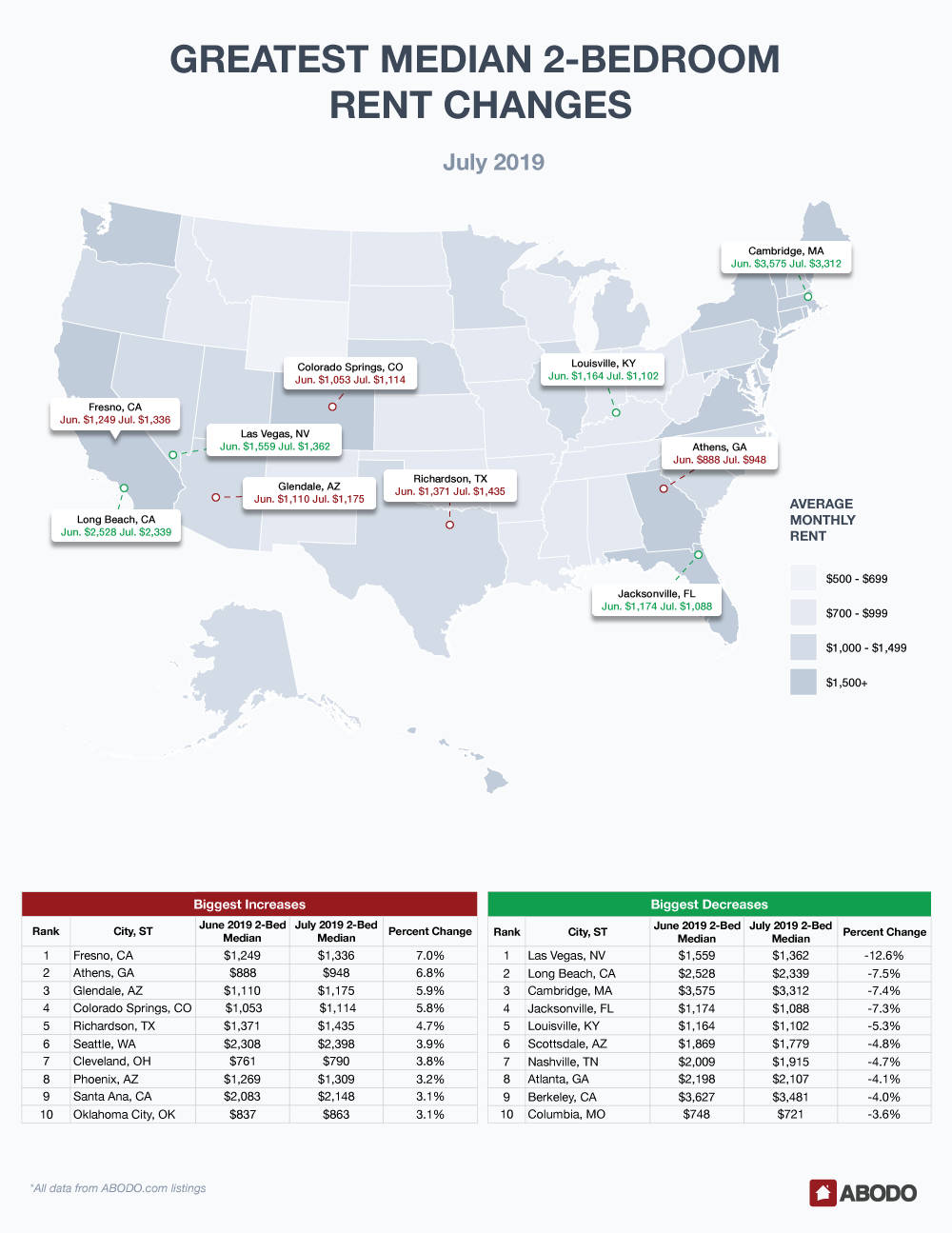 Similar to the trend we saw in July one-bedroom median rents, the percentage declines on our top ten losers list were significantly greater than the gains on the top 10 winners list. Las Vegas, NV posted a big 12.6 percent decline to $1,362, down from $1,559 in June. Long Beach, CA, Cambridge, MA and Jacksonville, FL lost between 7.3 and 7.5 percent. Louisville, KY sat alone in fifth place with a 5.3 percent fall to $1,102.

Rounding out the top two-bedroom losers were Scottsdale, AZ with a 4.8 percent loss, and Music City Nashville, TN with a 4.7 percent decrease. Atlanta, GA lost 4.1 percent to $2,107, expensive Berkeley, CA fell a full 4 percent, and at the bottom of the decreaser list was Columbia, MO with a 3.6 percent loss to a nicely affordable $721.

We mentioned last month that the “solid increases we saw in June were on the higher side of our expectations,” and the one-bedroom weakness and the unexciting two-bedroom gains along with the fact that losers fell more than the gainers rose, points to a steadier national rental market.

Inflation is tame, and the Fed has backed off from interest rate increases for a while. This bodes well for the stock market and the general economy. In addition, lower interest rates will translate to lower mortgage rates and that should help home sales and in turn take some pressure off rental prices.

We are seeing increasing Middle East tensions and that has caused a pop in oil prices. We’ll have to see how that affects general economic conditions.

To recap, we are comfortable with our feeling that rental prices will stay steady or increase slightly barring any major geo-political events. Check back with us in about a month for our August report.