We’ve heard it a million times: “the rent prices are too damn high.”

Renters always get the same advice: Don’t spend more than 30% of your income on housing otherwise you’ll have a tough time affording an apartment. That’s not just an anecdotal recommendation. According to the Department of Housing and Urban Development, households that spend more than 30% of their income on rent are “housing-cost burdened.” And the heavier that burden gets, the more difficult it is to afford food, utilities, and other necessary living expenses. But how feasible is the 30% rule?

Depending on your city and your occupation, it can be exceedingly difficult getting to a point where affording an apartment isn’t a burden. And it’s not just a concern for low-income households: The Joint Center for Housing Studies at Harvard estimates that nearly half of all U.S. renters face a cost burden.

Some of these renters are facing exorbitantly high housing costs and rent prices making affording an apartment too tough, and some might simply be living beyond their means, so we’ll dig into the incomes of burdened renters later on. But we’ll start by taking a look at the 19 U.S. cities that have the highest percent of cost-burdened renters in the country.

AFFORDING AN APARTMENT: 19 MOST COST-BURDENED CITIES 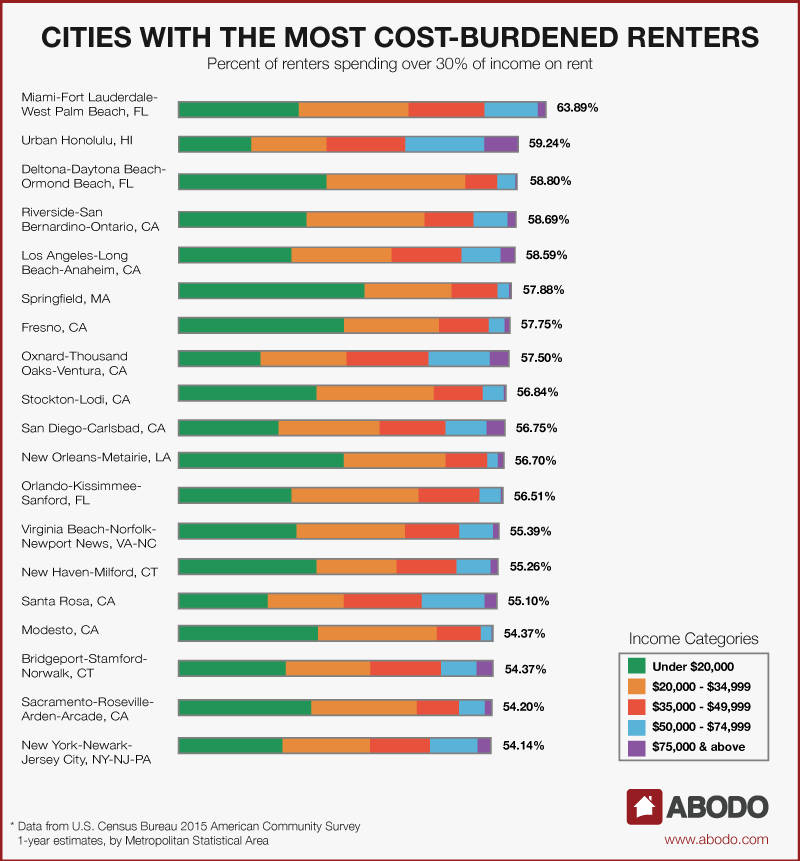 Of the 100 Metropolitan Statistical Areas with the most renters, these 19 have the highest proportions of renters facing a cost burden. All of these cities had at least 54% of their renters spending more than 30% of their income on rent, but Miami-Fort Lauderdale-West Palm Beach took the lead by a wide margin. Almost 64% of its renters — the vast majority of whom earn less than $35,000 per year — are cost-burdened. (If we remove our population limits, however, and consider all metropolitan areas, Atlantic City rises to the top with an incredible 65.54% of its renters cost-burdened.)

Almost half the cities on this list — including Los Angeles, San Bernardino, San Diego, and Sacramento — are in California, a state whose rental costs are projected to keep rising through 2018. Aside from the Miami area, Florida also contributed two more MSAs to the list: Deltona-Daytona Beach-Ormond Beach and Orlando-Kissimmee-Sanford. New York City-Newark-Jersey City, to no surprise, makes the list, despite a recent slowing in rental rate climbs.

But there are a few exceptions to affording an apartment that show that lower incomes aren’t the only factor in housing cost burdens. Urban Honolulu, despite having the second-highest total proportion of cost-burdened renters, has a lower portion of the cost-burdened who fall in the under-$20,000 income category (20.99%) than the three categories between $20,000 and $74,999. Oxnard-Thousand Oaks-Ventura and Orlando-Kissimmee-Sanford are the only other two MSAs without the highest portion of cost-burdened renters making less than $20,000.

THE INCOME FACTOR FOR AFFORDING AN APARTMENT 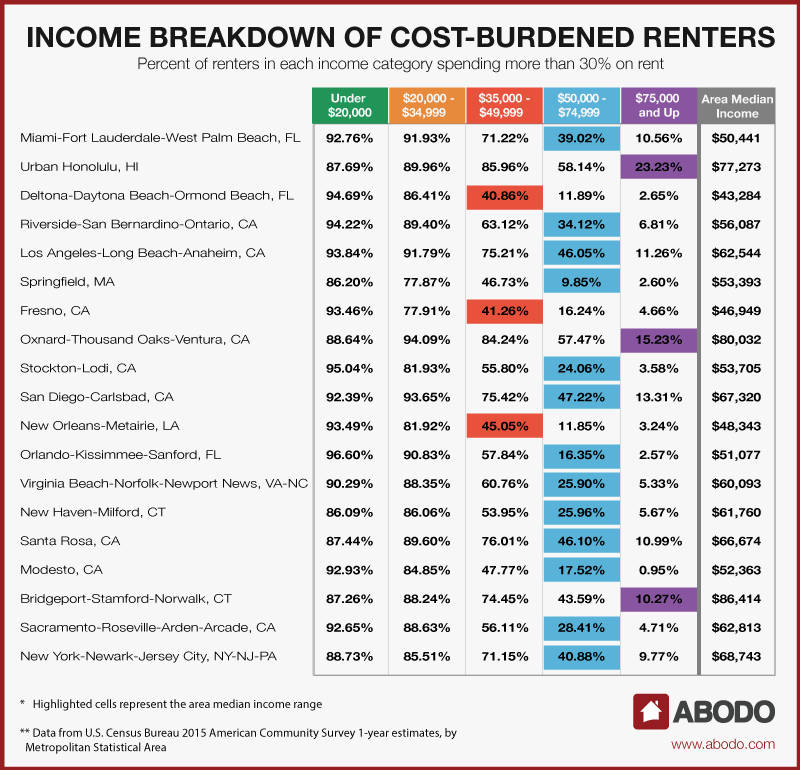 An examination of rental spending by income category yields striking results. In every case, those who make under $20,000 a year are particularly cost-burdened. In Orlando-Kissimmee-Sanford, for example, 96.60% of renters who earn less than $20,000 are cost-burdened. In Los Angeles, the figure is 93.84%; in Miami, 92.76%. The percentages are in the 90s and high 80s for every city on our list in the under-$20,000 category.

It’s enough to make you wonder what those top earners are doing, exactly, with their money. Are they even trying to find low commission real estate agents? Are they living beyond their means, or simply subject to exorbitantly high rents when affording an apartment is on the line? The three MSAs with the highest area median incomes — Bridgeport-Stamford-Norwalk, Oxnard-Thousand Oaks-Ventura, and Urban Honolulu — still have a substantial number of people who qualify as cost-burdened. In Bridgeport-Stamford-Norwalk, where the area median income is $86,414, 10.27% of the population making over $75,000 spends more than 30% of their salary on rent. In Oxnard-Thousand Oaks-Ventura, the AMI is similar, but the percentage is even higher, at 15.23%. And in Urban Honolulu, where the area median income is $77,273, a staggering 23.23% of the $75,000-plus bracket still spends over 30% of their salary on rent. 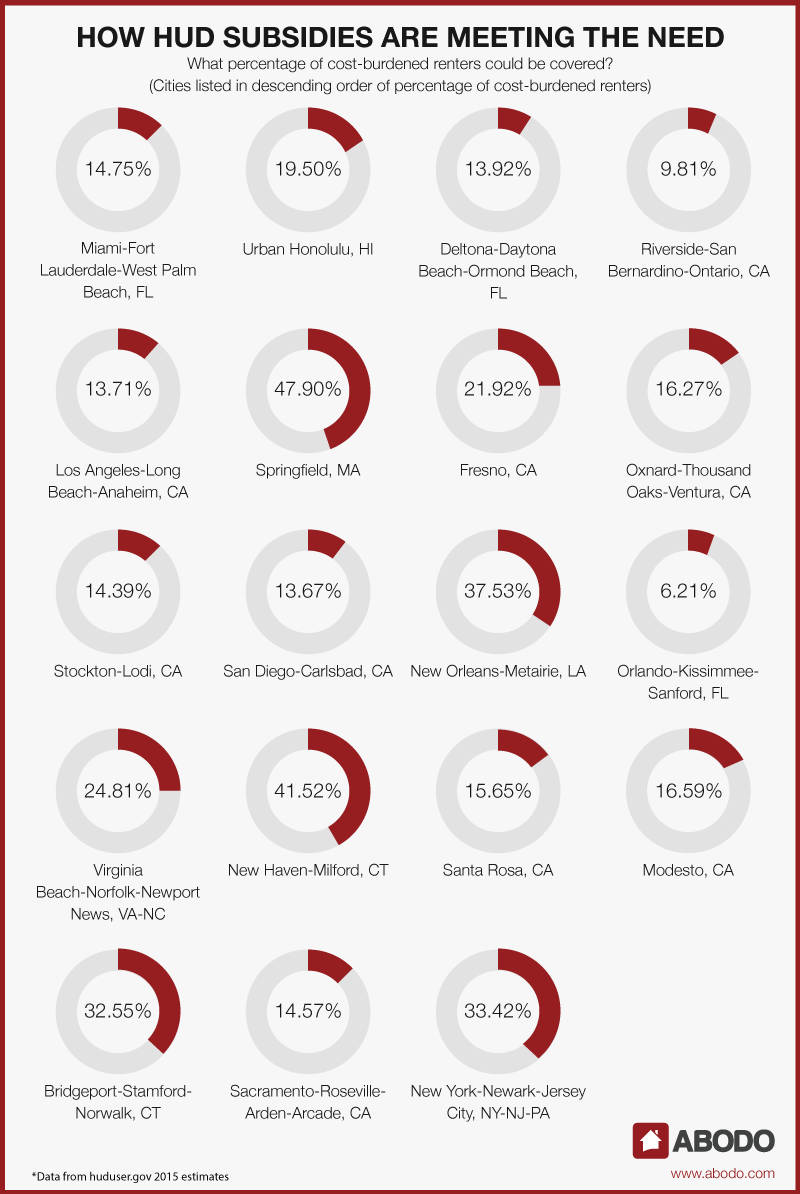 To help people secure safe housing, the Department of Housing and Urban Development provides subsidies to those who struggle to pay rent. However, HUD subsidies are generally determined by how much the renter makes — not how much they pay for rent — compared to the area median income (AMI). The limits vary depending on the location, but, for example, the HUD’s low-income ceiling guideline is 80% of the AMI.

In the above chart, we can see that the bulk of cost-burdened renters earn incomes well below the AMI, and by comparing that data with active HUD subsidies in each of those cities, we can see how well HUD programs are serving those who need them. The pie charts show the percent of a city’s cost-burdened renters that could be aided by an HUD subsidy, given current HUD disbursements.

By a landslide, Springfield, MA, has the highest percentage, with enough HUD-subsidized units to provide help to 47.9% of its cost-burdened renters. The next closest contender is New Haven-Milford, with 41.52%, followed by New Orleans-Metairie, with 37.53%.

By contrast, Orlando-Kissimmee-Sanford has enough HUD units for just 6.21% of cost-burdened renters. Riverside-San Bernardino-Ontario does a bit better, but still could serve only 9.81%, well below the majority of the cities.

The issue of affordable housing has myriad factors, with considerations for location and income being especially key. An income that would be extraordinary in some cities is in other cities barely enough to make ends meet.

Through this study, we’ve measured how renters in different cities and with different incomes are dealing with the high demands of housing costs. The HUD uses the measure of income compared to an area’s median income to assess need for housing subsidies — meaning not all cost-burdened renters qualify for subsidies, and not all those benefitting from subsidies are technically cost-burdened. But by using the measure of housing-cost burdens, we can still see in which areas renters are struggling the most. And the answers are a bit surprising.

Some of the largest U.S. cities, with generally the highest rents, have fewer burdened renters than, say, Springfield, MA — Chicago, Philadelphia, Boston, Houston, etc., didn’t even make an appearance on this list (though Chicago would have landed at #40, Philadelphia #25, Boston #39, and Houston #58). And even in the cities bearing the heaviest housing-cost burdens for renters, HUD subsidy benefits are limited to just a fraction of the burdened.

We used data from the U.S. Census Bureau 2015 American Community Survey to select the 100 Metropolitan Statistical Areas with the most total renter units in the country. Once selected, we calculated the total percentage for each MSA of renter units who spent 30% or more of their 2015 income on rent. Those renters falling into the categories “zero or negative income” and “no cash rent” were excluded from this calculation. After ranking the MSAs by this percentage, we chose the top 19 for further analysis.

For each MSA, we calculated the number of renters spending over 30% of their income on rent. We used the Census’s income categories as well as its area median income figures in our analysis of cost burdens across salary ranges.