For the next topic in our Best Places to Live series, we’re granting you front-row access to the states’ debate on politics. What does Twitter reveal about the home of the free?

Political topics are hot — especially on social media. Citizens are sounding off on social media, and what they tweet contains some of our country’s most controversial thoughts.

To find out where people were voicing support or angst for presidential candidates, we combed 772,000 tweets for hashtags related to controversial political issues and politically incorrect slurs. We also examined emotionally charged terms related to gun laws, the Black Lives Matter movement, women’s rights, and climate change. Does your home state reflect your political beliefs? Read on to find out. 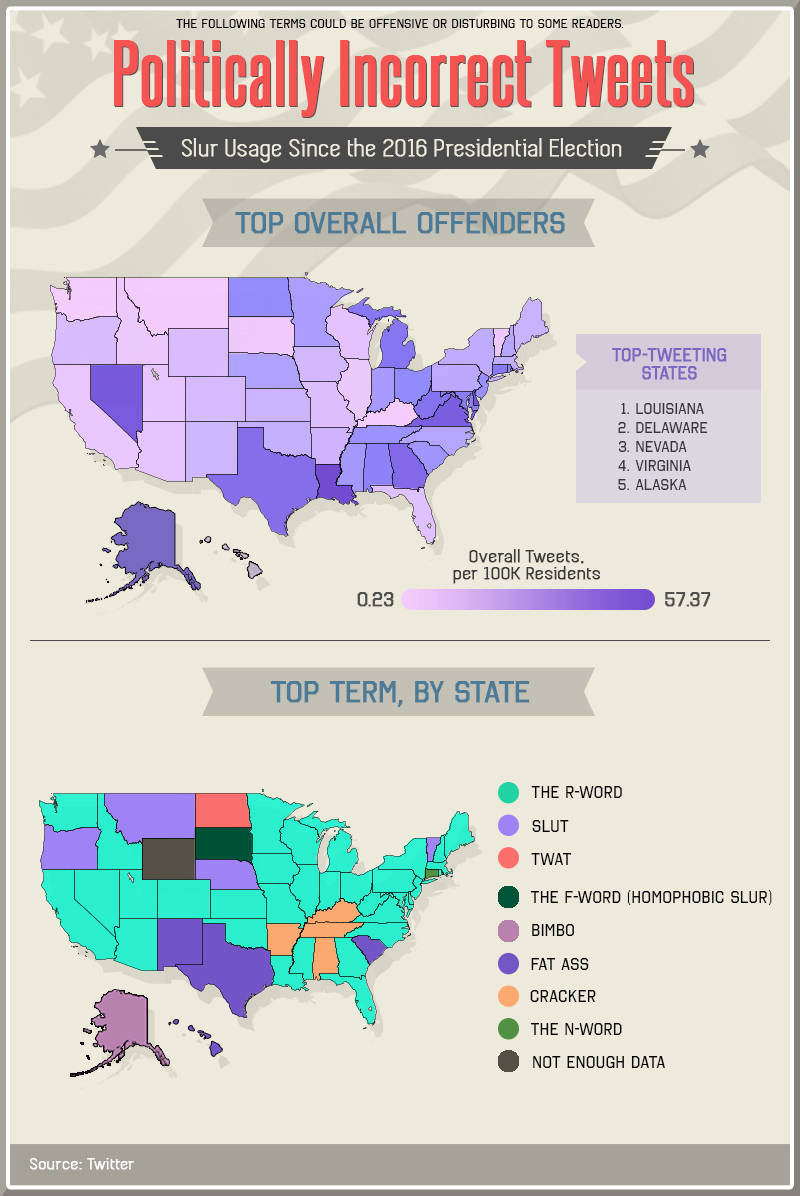 Click here to view the uncensored version of this graphic.

When we examined the actual terms used, we could pinpoint specific words per state. Louisiana tweeted out the “R-word” most often, but its residents weren’t alone; a slew of other states also used the most-tweeted slur. “Fat ass” was most common in Texas, South Carolina, Hawaii, and New Mexico. “Slut,” which is typically directed at women, turned up the most often in Nebraska, Maine, Vermont, and Oregon.

As far as racially charged slurs, Connecticut favored the “N-word.” “Cracker” found a home in Kentucky, Tennessee, Arkansas, and Alabama. An outlier also had representation with the “F-word” (homophobic slur) in South Dakota. 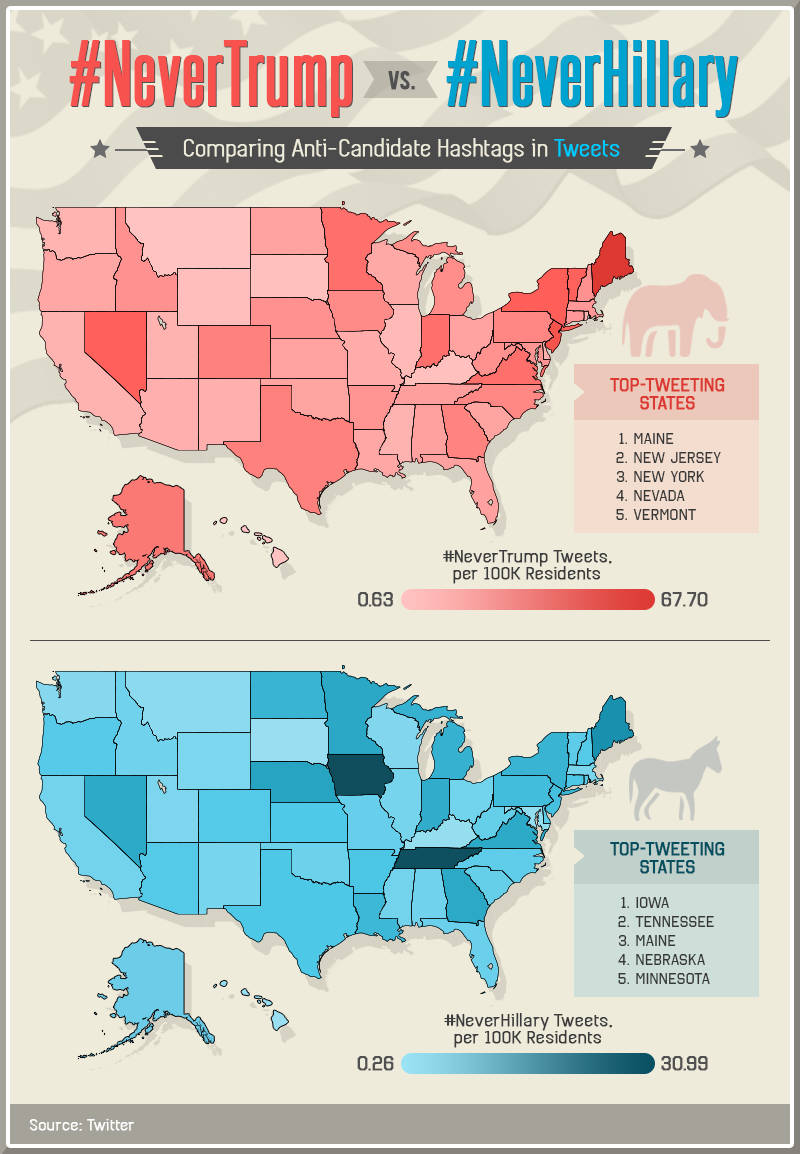 According to our collected data, #NeverTrump was mentioned in a greater volume of tweets than #NeverHillary — but not necessarily as a favorite. Per 100,000 residents, there were almost 68 tweets for #NeverTrump in Maine, followed by New Jersey (53 tweets), New York (46 tweets) and Nevada (45 tweets).

Swing-state Iowa led in postings for #NeverHillary, with about 31 tweets per 100,000 residents. But even her top-tweeting state was no match for the anti-Trump noise; the volume of tweets related to the leading locations against each candidate revealed more than a 74% difference.

Maine’s social media users seemed to be a little unhappy with both the Republican and Democratic political candidates. Mainers made the top five for both, but again, their voices were much louder when it came to trashing Trump. 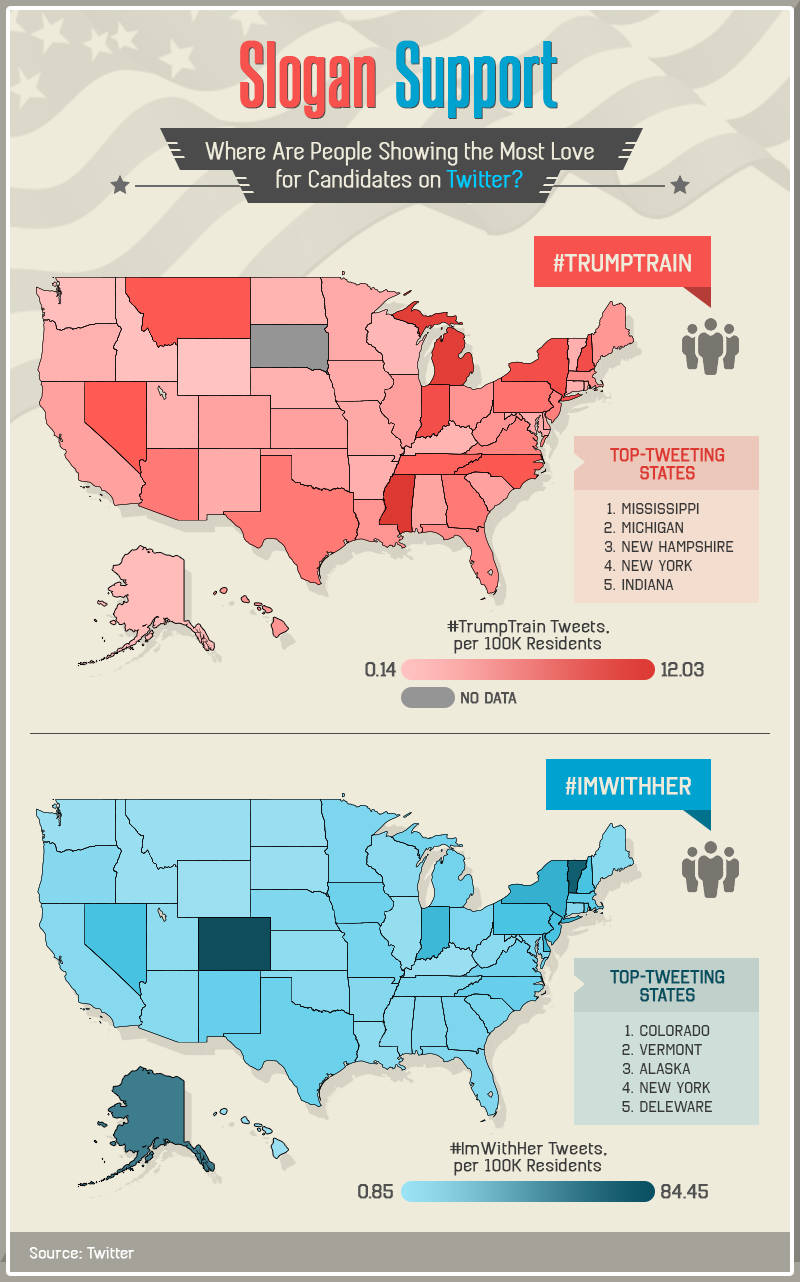 We also analyzed which candidates received the most Twitter love in each state by gathering tweets with the hashtags #TrumpTrain and #ImWithHer.

There were far fewer Twitter postings containing #TrumpTrain, but the top states to use the hashtag were Mississippi (12 tweets), Michigan (11 tweets), New Hampshire (10 tweets), and New York (10 tweets). 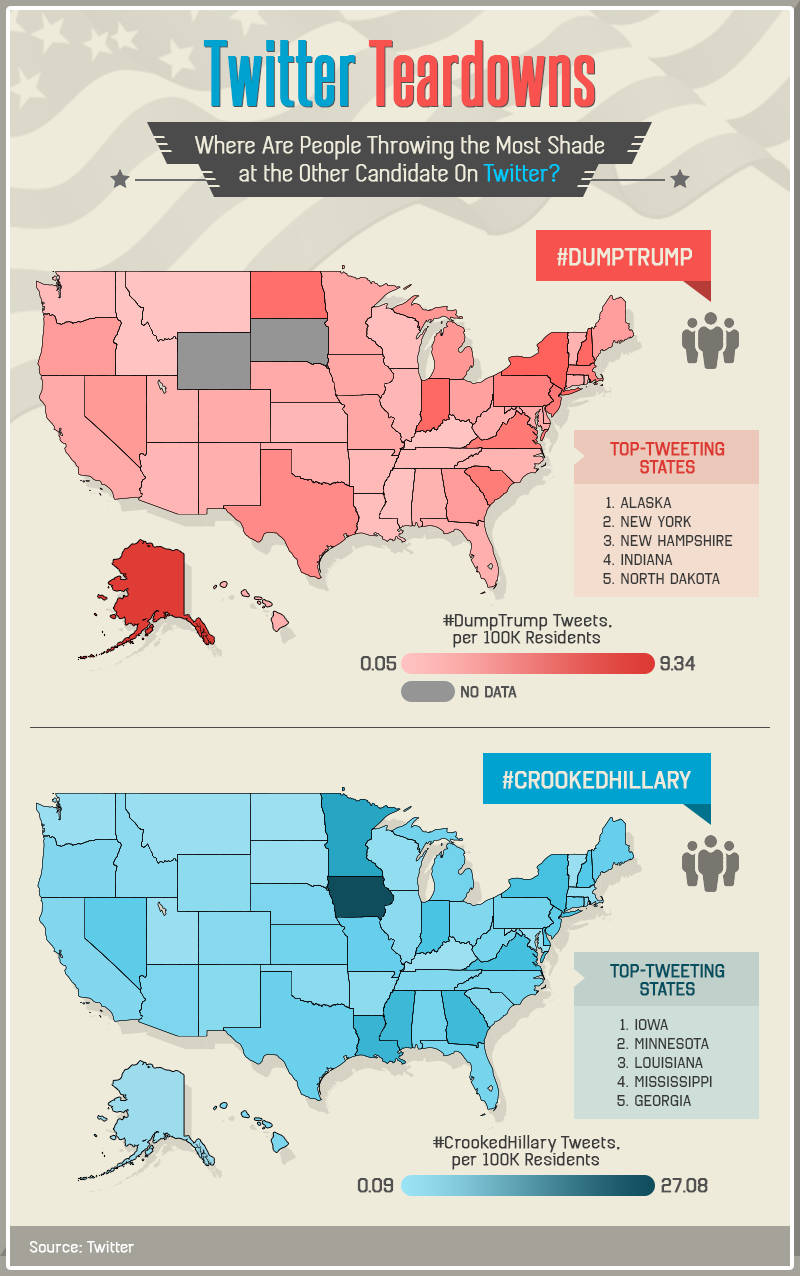 Which candidate got the most heat from Twitter users? The hashtag #CrookedHillary had a larger volume of postings than #DumpTrump, but does that fall in line with state voting tendencies?

Alaska had the most #DumpTrump tweets — about nine per 100,000 residents. However, the state leaned Republican in the last presidential election, with the highest number of the state’s voters pulling for Mitt Romney. New York (six tweets) and New Hampshire (five tweets) followed Alaska with the most Twitter teardowns of Trump.

#CrookedHillary was used most often in Iowa, with about 27 tweets per 100,000 residents. This swing state has six electoral votes up for grabs, and though Politico reported a five-point lead for Trump, the state leaned toward Barack Obama in the 2012 presidential election.

The Black Lives Matter movement was born on social media in 2013, following the death of Trayvon Martin and the acquittal of George Zimmerman. The movement is still gaining momentum three years later, promoting protests and gaining more supporters through social media and public events.

Most recently, the movement criticized racial relations with law enforcement and local government, especially following recent fatal shootings by police officers in Oklahoma and North Carolina. As social media continues to act as a soapbox for citizens, presidential candidates are being forced to address these modern movements and social issues with their voters.

The #BlackLivesMatter hashtag surfaced most frequently in New York (20 tweets per 100,000 residents), Georgia (19 tweets), and Louisiana (19 tweets). According to the 2010 U.S. Census, these states have some of the highest black populations in the country: By population, Georgia and New York rank #1 and #2, and Louisiana has the second-highest percentage of the population identifying as African American.  Although Mississippi had the highest such percentage of any state (37%), there were only about five #BlackLivesMatter tweets per 100,000 residents there.

Other politically-related topics we found trending on Twitter were #ClimateChange, #WomensRights, and #WhitePrivilege. However, each of these hashtags received significantly fewer tweets than candidate-specific or Black Lives Matter hashtags.

There were about six #ClimateChange tweets per 100,000 residents in Maine, about three #WomensRights tweets in Kansas, and about one #WhitePrivilege tweet in Vermont. Still, these social issues remain relevant, especially as we prepare to elect a new U.S. president who will appoint justices to the Supreme Court. 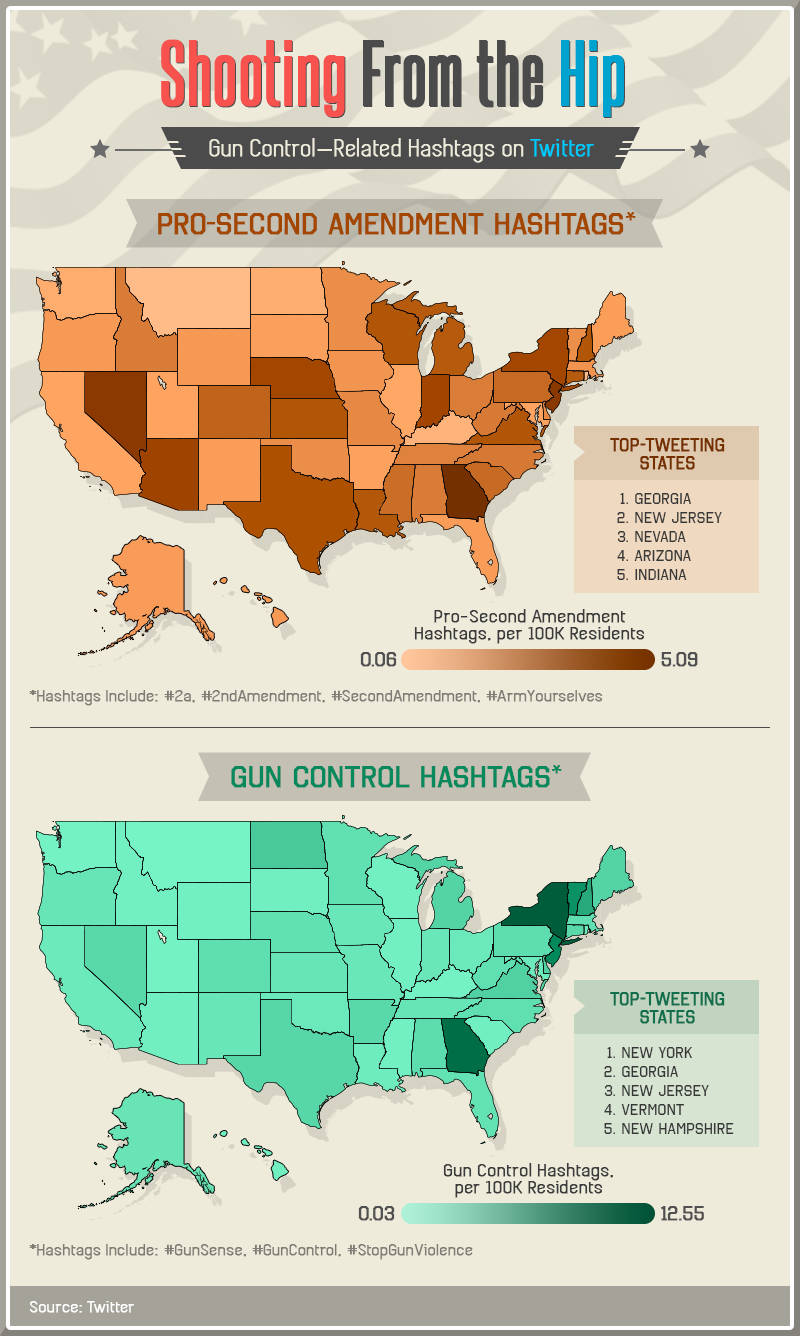 Gun legislation was also at the forefront of the conversation on Twitter, following recent terrorist acts and public shootings throughout the country and around the world. As these incidents have become more frequent over the past few years, presidential candidates seem to be under mounting pressure to address the Second Amendment.

According to the data, there was a greater volume of tweets containing hashtags related to gun control advocates — New Yorkers posted the most, with about 13 tweets per 100,000 residents. In comparison, Georgia posted the most pro-gun hashtags, with about five tweets per 100,000 residents. However, some of the discrepancy could have been caused by pro-Second Amendment sentiments expressed alongside the #GunControl hashtag.

Although Twitter showed more tweets related to gun control advocates, the Pew Research Center reported that the number of gun rights advocates has increased over the past four years since the Newtown school shootings, and that about 57% of Americans said guns do more to protect people rather than endanger them.

Twitter has offered a platform for citizen activism and advocacy, especially when it comes to political issues and the recent presidential election. It also offers an insightful look at the states that most align with certain political values.