Last month our prediction was, “Look for summer one and two-bedroom rent price increases to continue,” and that’s just what we saw. August one-bedroom units rocketed up almost 2.5 percent from July while two-bedrooms gained almost 2 percent.

One-bedrooms are now up 5.87 percent for the year and two-bedrooms have risen 4.87 percent. 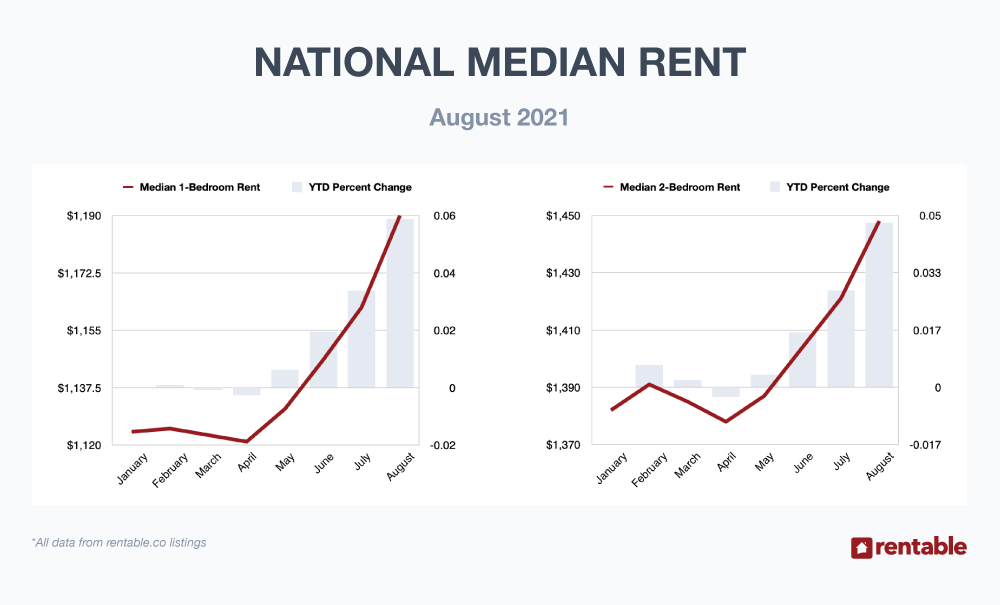 Our top-ten gainers showed a wider range with the winner almost breaking into double digits. Even our 10th place city posted a gain of well over 4 percent.

Price gains on our list after those five cities were as robust as our reported July gains.

The most expensive one-bedroom on our gainers list was again Santa Ana, CA at a median $2,152 while the most affordable was Glendale, AZ barely over the $1,000 mark at $1,036. No city on August’s top ten gainers list reported median rent under $1,000. 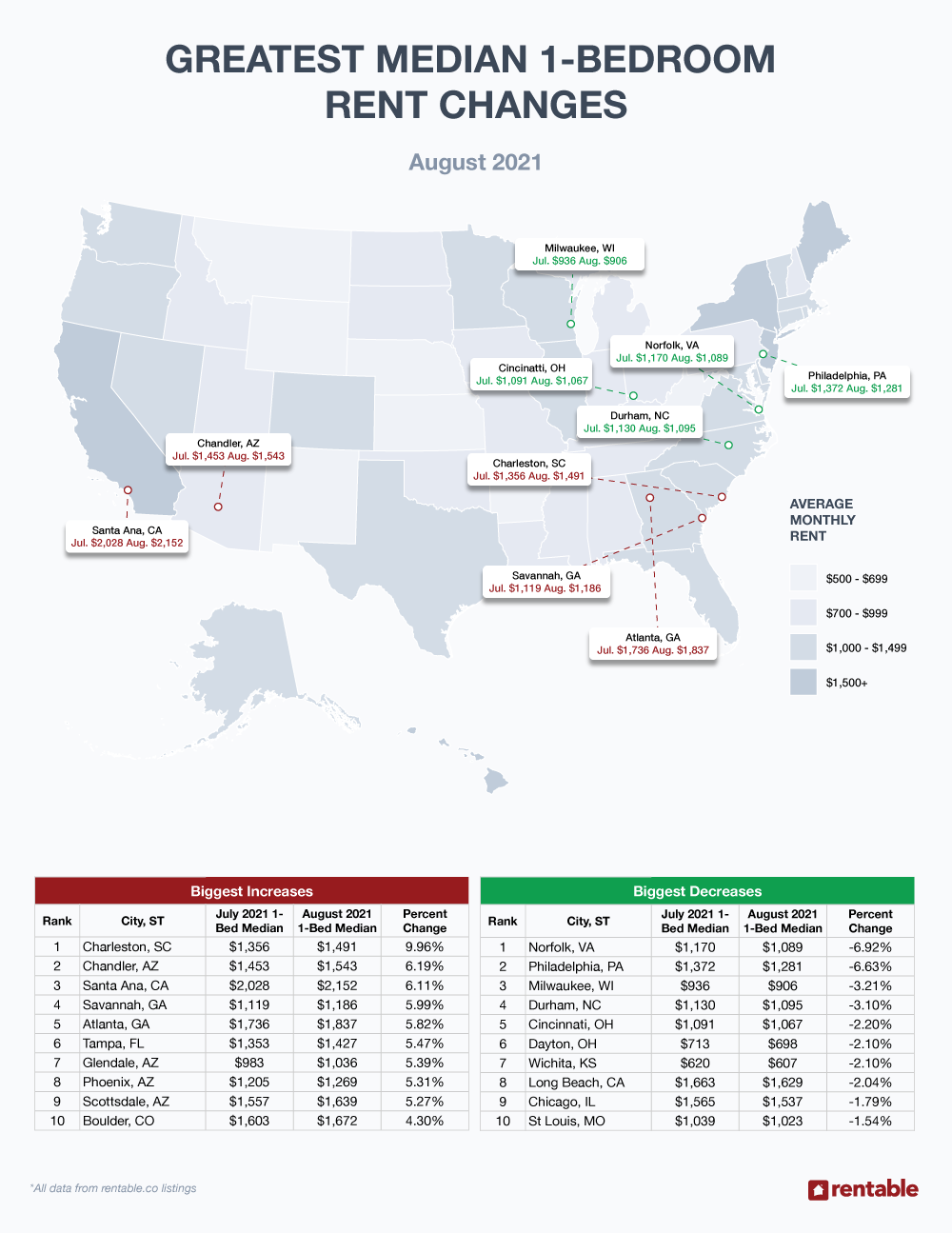 Again, San Francisco, CA was conspicuously absent from our top ten losers list, continuing to hold its ground for another month after a long period of decline.

Those looking for pure value should head to Wichita, KS where a median one-bedroom apartment rented for only $607. Long Beach, CA was the priciest one-bedroom on our losers list at $1,629.

Three of our top ten two-bedroom gainers were in Arizona this month.

Baton Rouge, LA reported the cheapest two-bedroom median rent on our gainers list at $1,119 while Santa Ana, CA took the prize for the priciest at the aforementioned median rent price of $3,000. 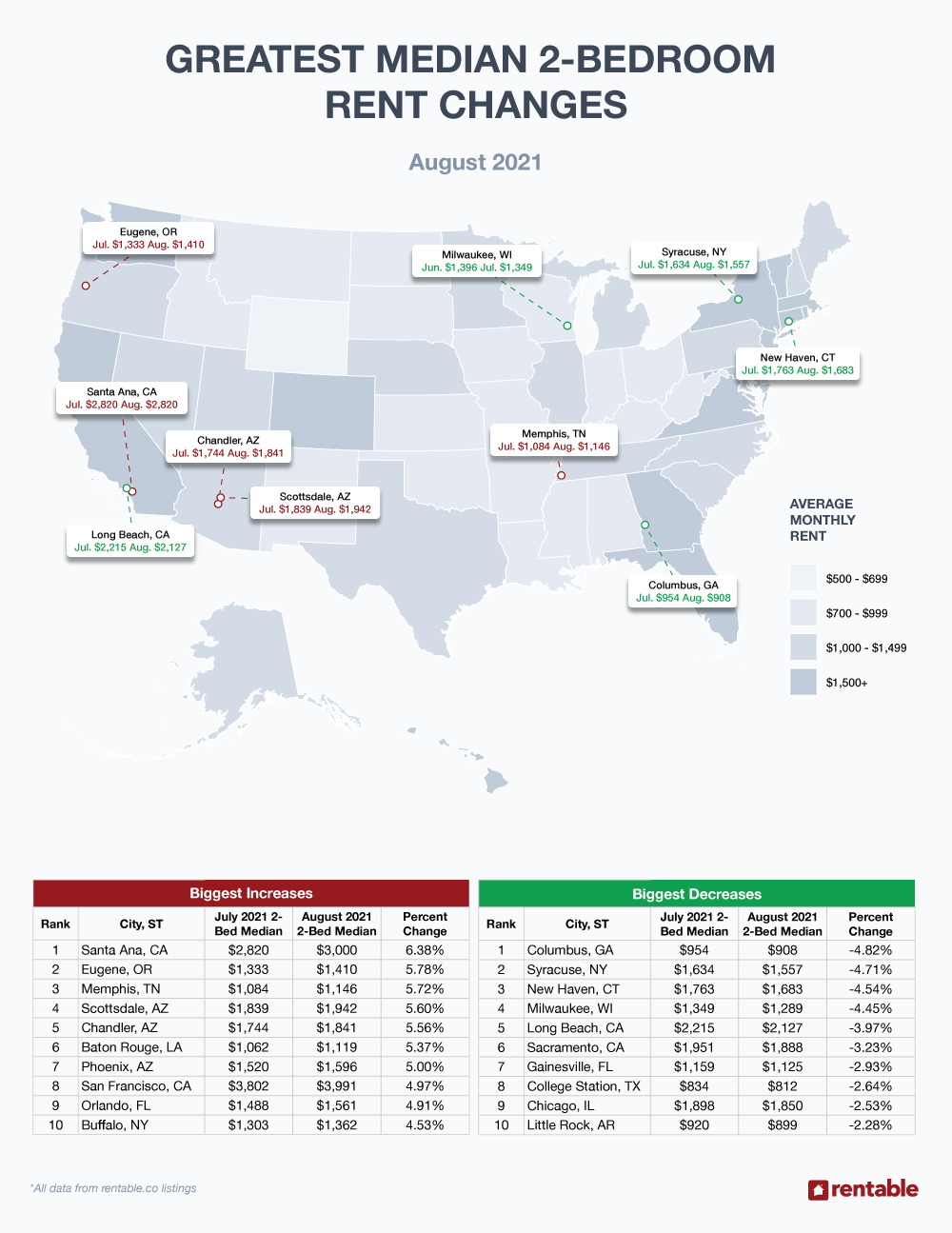 The delta variant is rampant and there are fears of more lockdowns as the fall season beckons along with the start of school. So far, governments are not keen to introduce stringent new restrictions on businesses or public behavior, but if pandemic cases keep rising at their current alarming rate, all bets are off.

Inflation still looks at least moderate, and while the stock market and oil prices have backed off a little, few would call equities or energy cheap.

The housing market seems to have taken a pause — even in the top cities for millennial owners — as frenzied multiple offer situations in many parts of the country have lessened. On the rental front, eviction prohibitions are beginning to come to an end.

One big question is whether a wave of evictions and subsequent empty apartments will cause a supply imbalance in favor of renters. And what will happen to the evicted renters?  An eviction can be akin to the death penalty when looking for a new place to live.

The pandemic has been a journey into the great unknown, and the coming months bring more questions than answers regarding nation median rent trends.