Each month this year we have been reporting that the nation’s one- and two-bedroom median prices have been basically flat, and our August data reinforces that trend.

Since January 2020, one-bedroom units have increased by 1.93 percent, and two-bedroom apartments have risen only 0.52 percent.

Again, similar to what we have frequently reported this year, August one-bedroom increasers and decreasers moved in a tight range; two-bedroom gainers showed more of a spread, but losers were once again closely packed. 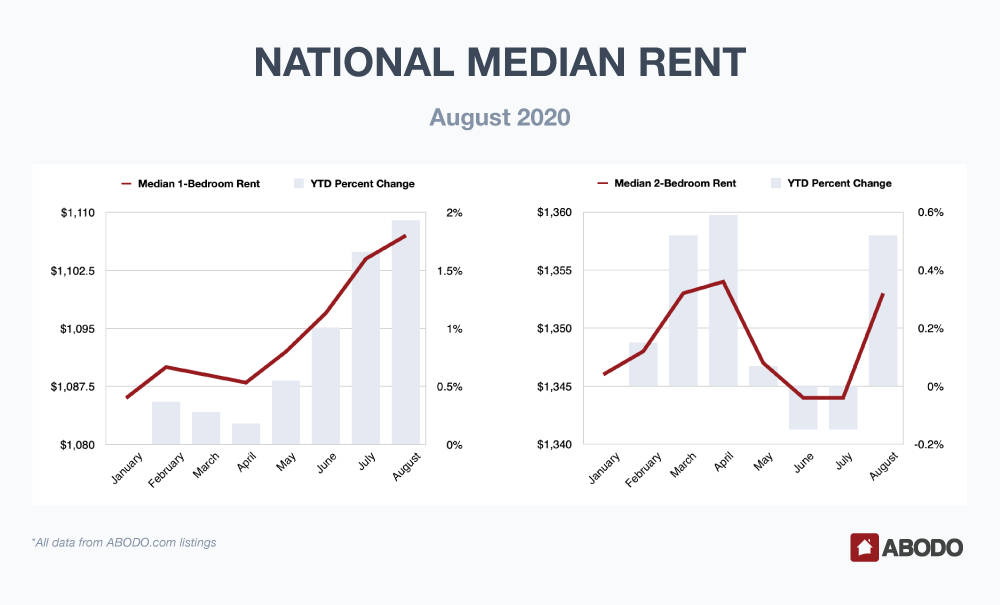 Our top ten one-bedroom winners’ list shows a city with a 5.71 percent increase while the tenth-place city rose 2.62 percent. That’s barely a 3 percent differential. Our top loser fell 6.73 percent and the tenth-place locale lost 3.10 percent — again a tight range as only 3.63 percent separated the worst from the first.

Baton Rouge, LA of course was the biggest bargain at $877 while Fort Lauderdale, FL reported the most expensive one-bedroom median unit at $1,827. 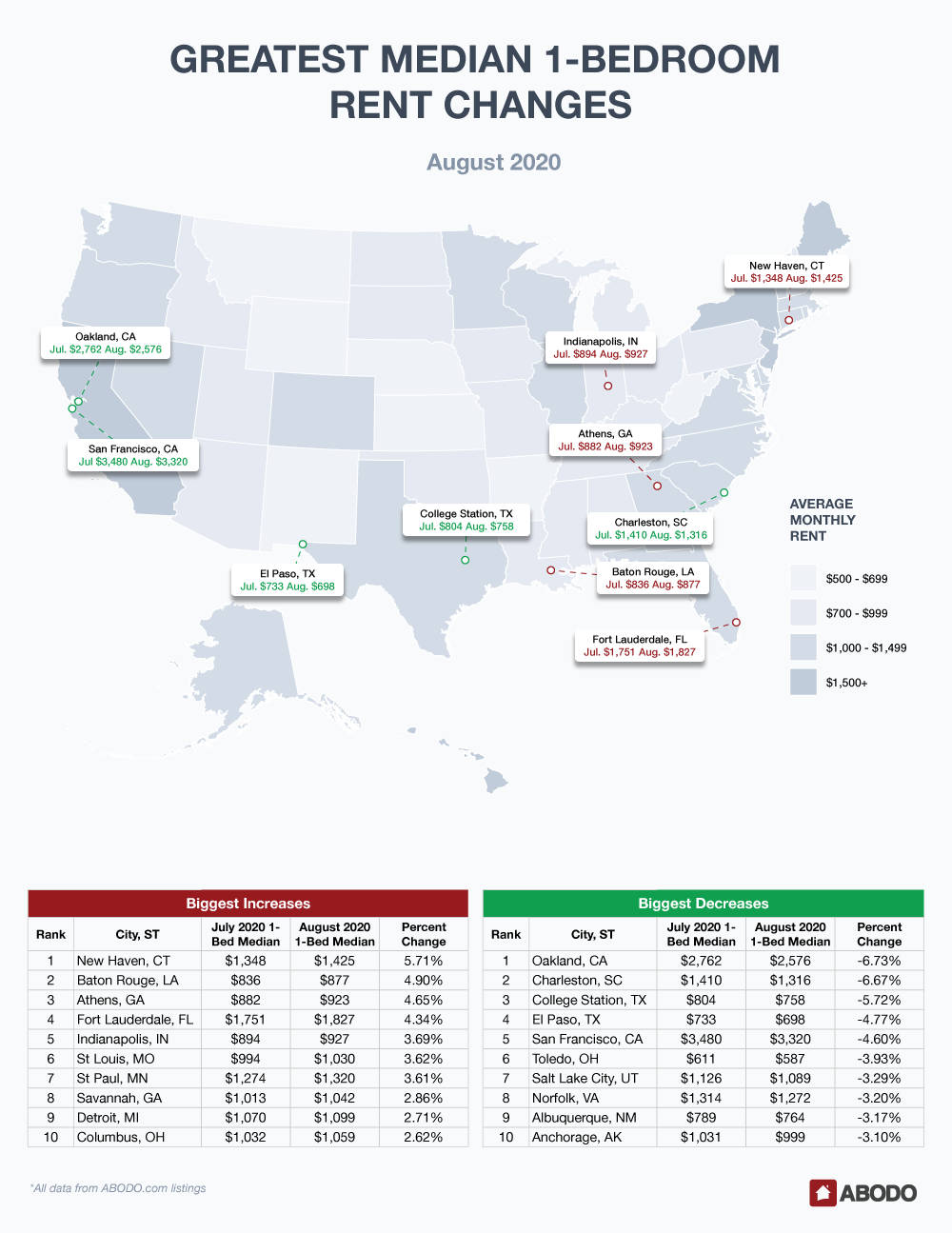 No two-bedroom losers on our national top-ten list broke into a double-digit fall as Oakland, CA led with a 6.73 percent drop to a very pricey $2,576. Charleston, SC was right behind with a 6.67 percent dip and College Station, TX lost 5.72 percent to a very reasonable $758.

To round out our top ten decreasers, Toledo, OH, Salt Lake City, UT, Norfolk, VA, Albuquerque, MN and Anchorage, AK— a city very seldom seen on our compilations—all moved within a tight range from 3.1 to 3.63 percent bottom to top.

As you would expect, San Francisco was the priciest locale at $3,320; conversely, Toledo, OH was the cheapest place to rent a one-bedroom; placing 6th on our losers’ list, Toledo reported a median rent of only $587.

There were a couple of standouts in our top ten two-bedroom winners’ list, but after the first two entries, there was barely a 3 percent difference from bottom to top. The two-bedroom decreasers had a muted movement range from as they lost between 1.61 and 5.50 percent.

Detroit, MI two-bedroom median rent rocketed 11.18 percent to $955. Fort Lauderdale, FL, like its one-bedroom cousin, reported a healthy 714 percent gain to settle at $2,115. Cleveland, OH came in third with a 6.10 percent median rent rise to $1,547 and Fresno, CA was the last locale to report an increase of 5.0 percent or more.

Finally, a two-bedroom apartment in Bakersfield, CA moved upward to $1,106–a gain of 3.08 percent.

Even as it took the number one spot, Detroit, MI was the most economical place to reside at $955, and it’s again no surprise that Ft. Lauderdale, FL claimed the most expensive median two-bedroom rent trophy at $2,115. 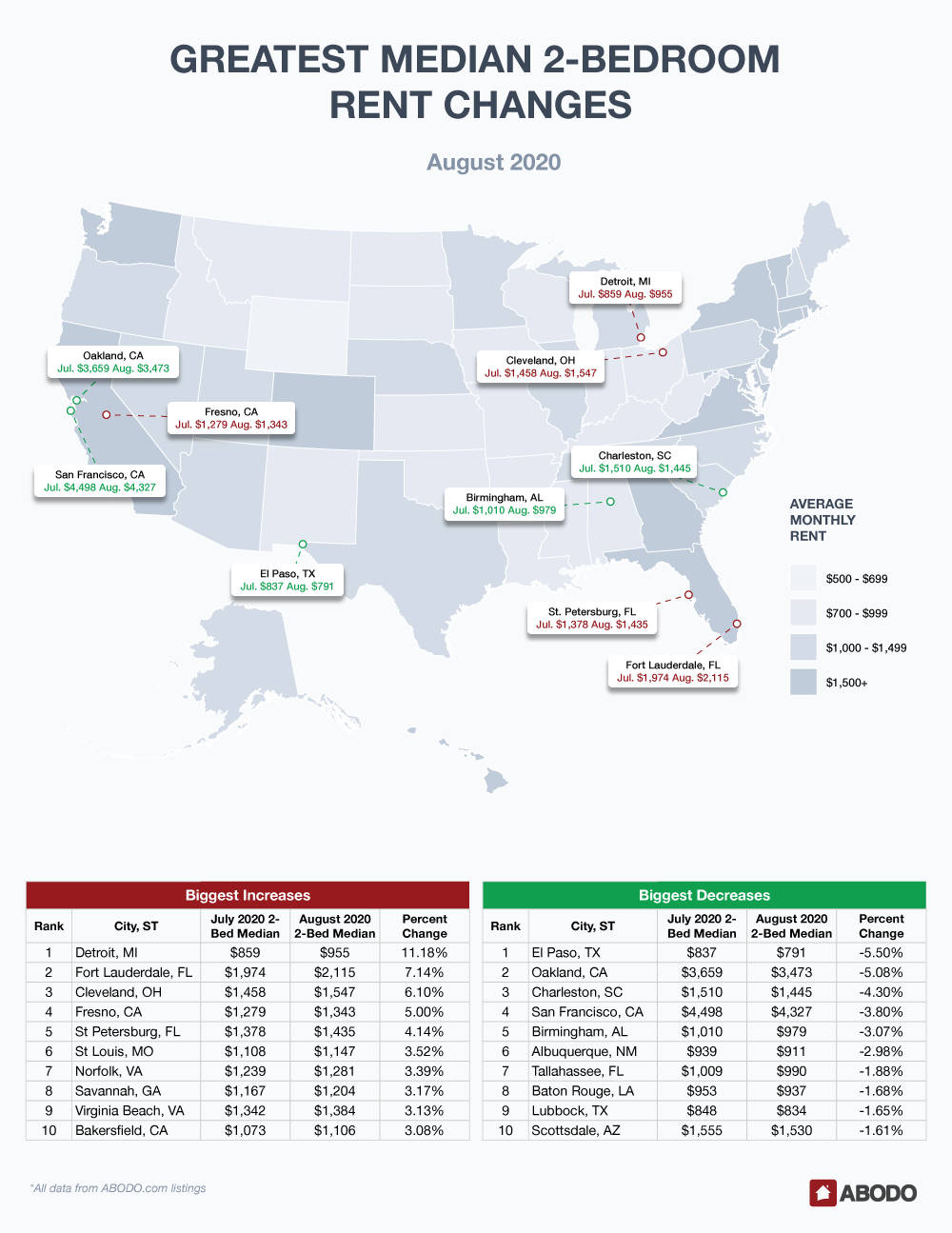 Our number one two-bedroom loser — El Paso, TX — was the most affordable two-bedroom unit at $791, and even with its recent losses, San Francisco remained the priciest two-bedroom apartment on our losers’ list at $4,327.

COVID-19 is not being gentle on anyone’s mind as the pandemic some days seems to be again spiraling out of control. A vaccine may be nearer, but there doesn’t yet seem to be a coherent national strategy to deliver it when it does arrive. And whether a vaccine engineered in record time will actually protect anyone from the disease is completely unknown at this point.

Landlords seem happy to just collect rent, and we believe that rent increases have been put on the back burner because as we have mentioned before, some rent is better than no rent at all.

Some big city rents did fall precipitously–like those in san Francisco—because certain groups were beginning to flee cities for the relative safety of rural areas. Now, however, rural areas are no longer disease-free islands, and it doesn’t seem like anyone can go anywhere to outrun the virus.

Sorry for the bleak tone, but until there is a therapeutic treatment or a proven COVID-19 vaccine, we’re predicting a stable rental market at best. With expanded federal unemployment benefits gone–at least for now–and with federal eviction protections expired, we’re worried about a deepening and more long-lasting recession. If that happens, we could see rental market weakness.

Be sure to check with us next month for our September update.