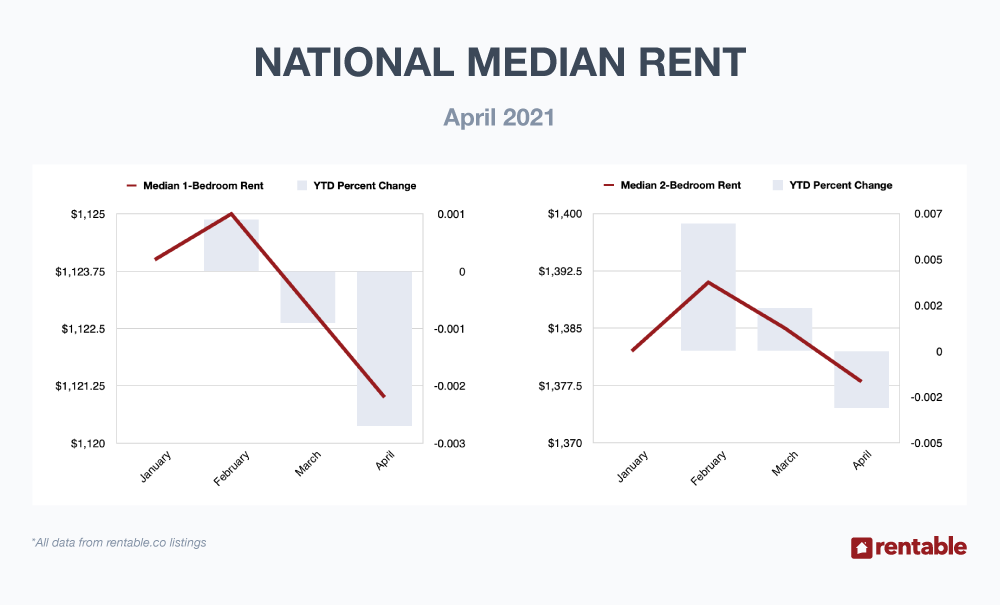 As we just mentioned above, Norfolk, VA led our one-bedroom gainers list with a hardly-stellar 6.03 percent gain to a median $1,091. College Station, TX followed with a 5.76 percent gain, and that was it for the biggest one-bedroom moves.

The most expensive one-bedroom on our gainers list was Reno, NV at $1,194, while the most affordable was Toledo, OH at $656. 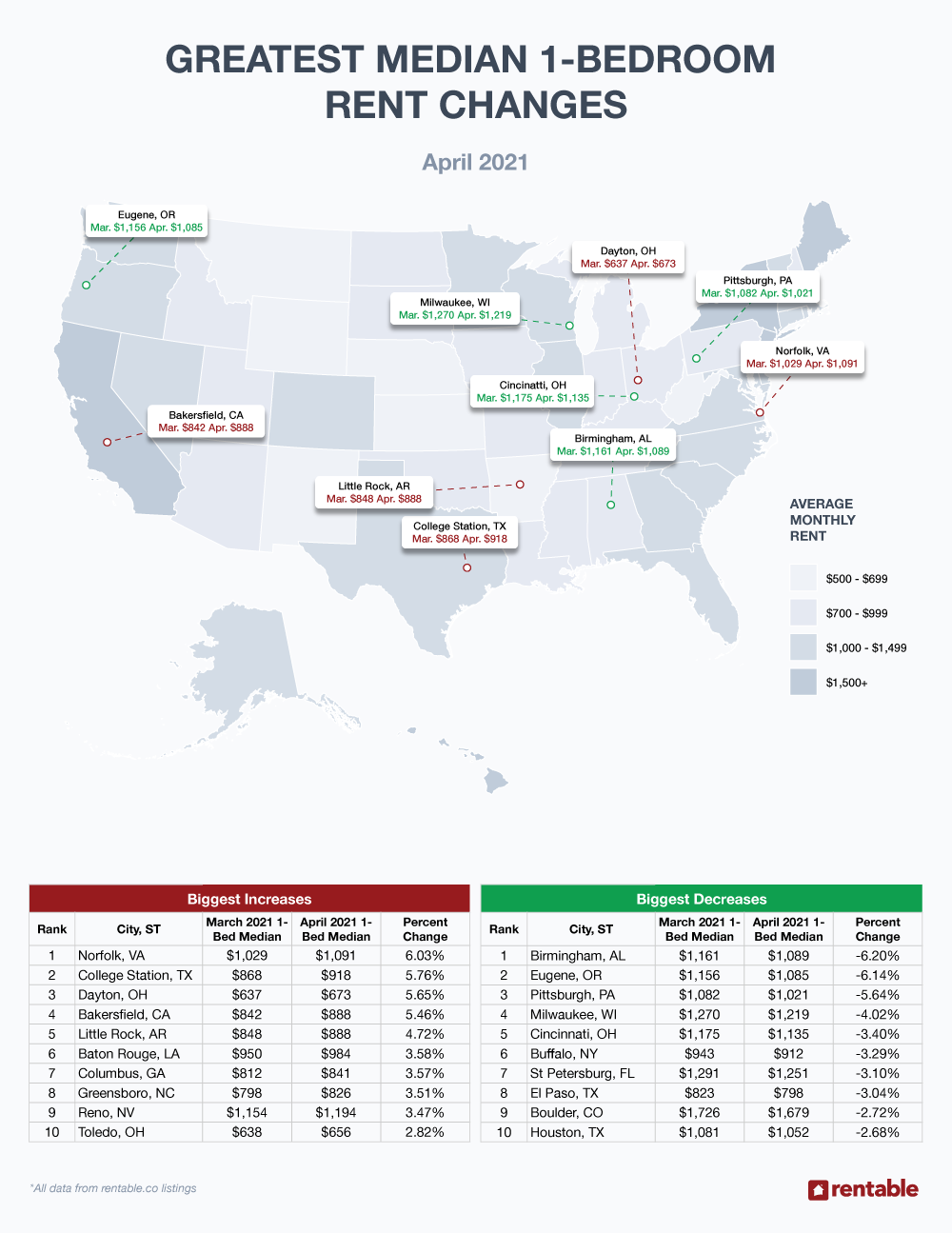 Birmingham, AL topped our top ten one-bedroom median rent decreasers list with a loss of 6.20 percent to $1,089, Eugene, OR fell a more moderate 6.14 percent, and Pittsburgh, PA took third place with a 5.64 percent loss. Milwaukee, WI was close behind with a 4.02 percent drop to $1,219.

Those looking for pure value should head to El Paso, TX where a one-bedroom apartment rented for a comfortable $798. Boulder, CO was the priciest one-bedroom on our losers list at $1,679.

Again, in April we saw tight ranges in both our 2-bedrroom gainers and losers lists. Just over 2.5 percent separated the first and last place cities on our gainers list, and our decreasers reported a spread of less than 3.0. This simply means that the market is not moving with strength in either direction.

Springfield, MO was the cheapest two-bedroom median rent on our losers list at $878; And surprisingly, Richardson, TX took the prize for the priciest at $1,687. 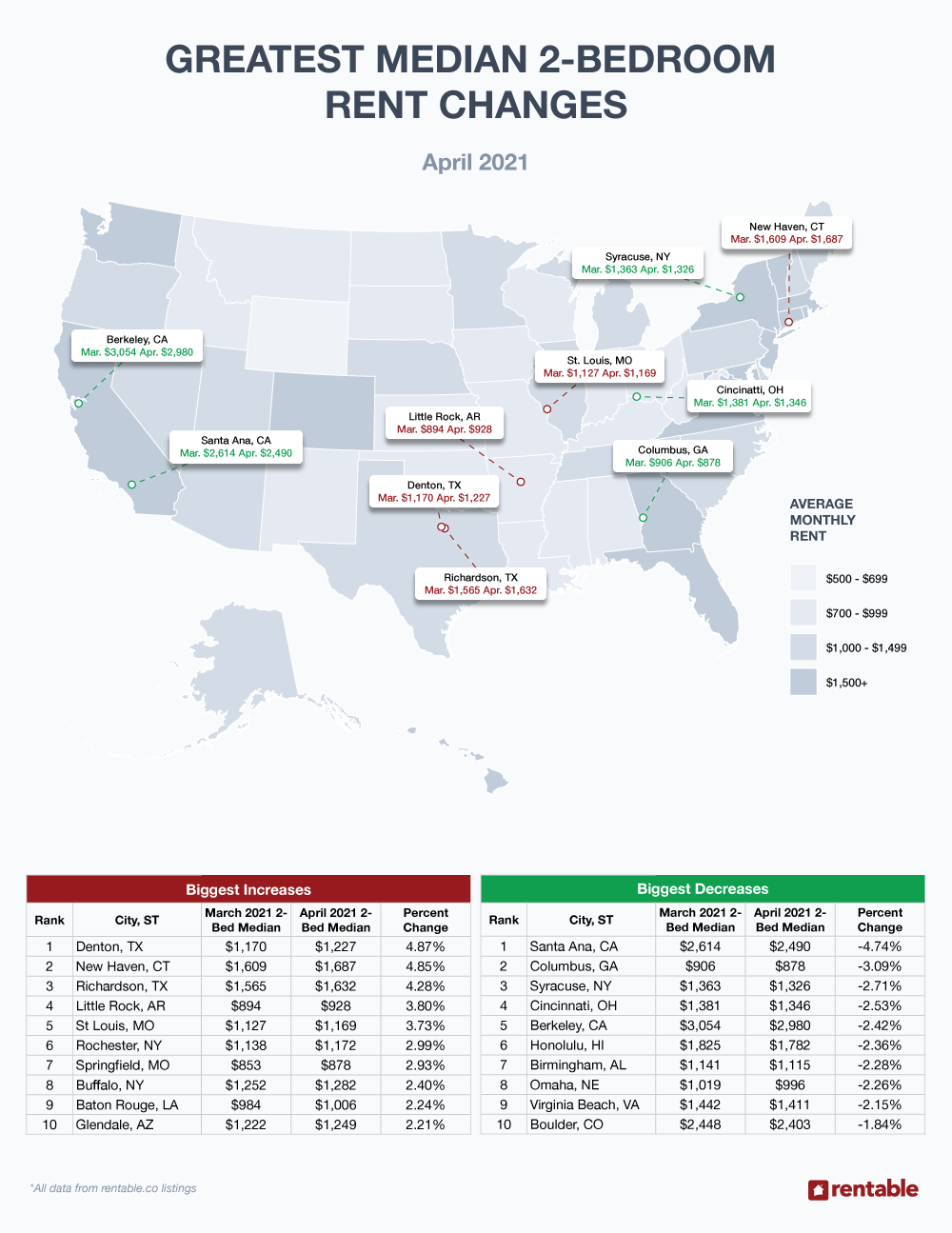 Columbus, GA was a nice two-bedroom value at only $878, and Berkeley was its usual expensive self at $2,980.

The U.S. economy political arena has been dominated by the pandemic for over one and one-quarter years. And while pundits had warned the quickly recovered stock market was ready for another sharp fall, this has not occurred as retail investors who have been playing the market with government stimulus money from their home offices continue to heavily buy the dips.

The price of crude oil has stealthily risen and is hovering near or slightly above the $60 per bbl. mark. Across the country, new and used home inventories are at record lows and this anomaly has set single home prices on fire. In Austin, TX, for example, it is difficult to buy any homes for under $400,000, but there are plenty of rental units available, and landlords are hesitant to test the market with hefty increases.

In our view, loads of stimulus money and a quickly recovering economy equal inflation danger, and that alone will put upward pressure on one- and two-bedroom rental prices.

Be sure to check back next month to see how this plays out.