The internet is a scary place. For every funny cat video, there are a hundred YouTube comments threads that will make you question your faith in humanity. But no website is quite as scary as Craigslist — especially for apartment hunters. The apartment section of Craigslist is a breeding ground for creeps, weirdos, and the straight-up terrifying members of the online community. In a pre-Rentable world, many unfortunate souls had to seek out Craigslist apartment ads out of sheer desperation. Here are the scary results: 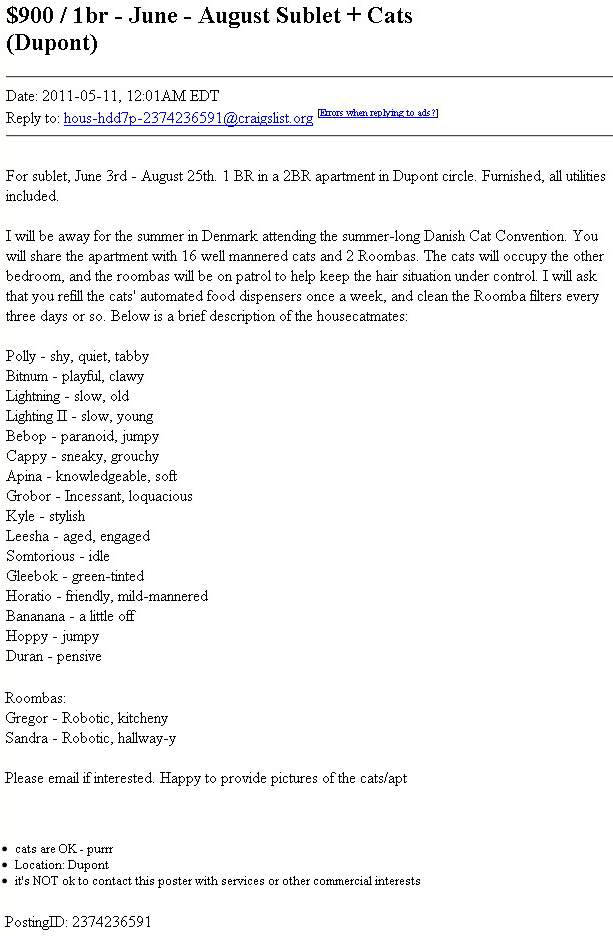 Is there a worse fate in this world than becoming a crazy cat person? Nothing says, “I’m a well-adjusted adult” like owning enough cats to fill a classroom. Apparently this Craigslister didn’t get the memo that cats are terrifying creatures. Even more puzzling is why this advertiser decided to list all of his cats by their personality traits like the Seven Dwarfs. Is it really necessary to know that Grobor is both incessant and loquacious? Thankfully, the Roombas are there to even the odds during the inevitable cat mutiny. 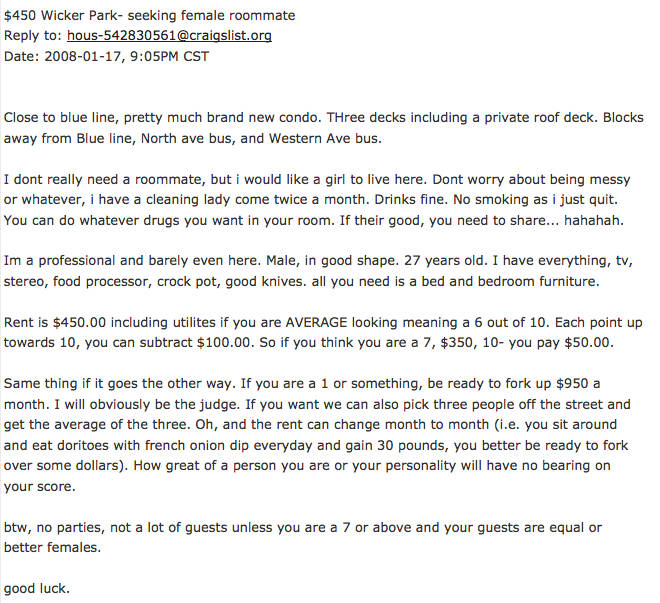 You have to hand it to this guy. He’s equal parts misogynistic, offensive, and creepy. It’s a bold strategy to create a rent pay scale that’s based entirely on roommate attractiveness. Fortunately, personality has no bearing on the rent, or else this guy would be dead broke. This ad was clearly the brainchild of Turtle from Entourage, right down to the French onion dip reference and affection for good drugs. The “good luck at the end” is the coup de grâce on this masterfully douchey ad.

You know an ad is bad when you have to clarify that you’re “not looking for a sex slave.” This Craigslist creeper had to resort to cute kittens and free rent to lure in some poor, unsuspecting women. This is a prime example of just how bad pickup methods were in the pre-Tinder world. The whole thing is a reminder that men are not to be trusted on any platform — especially the internet. 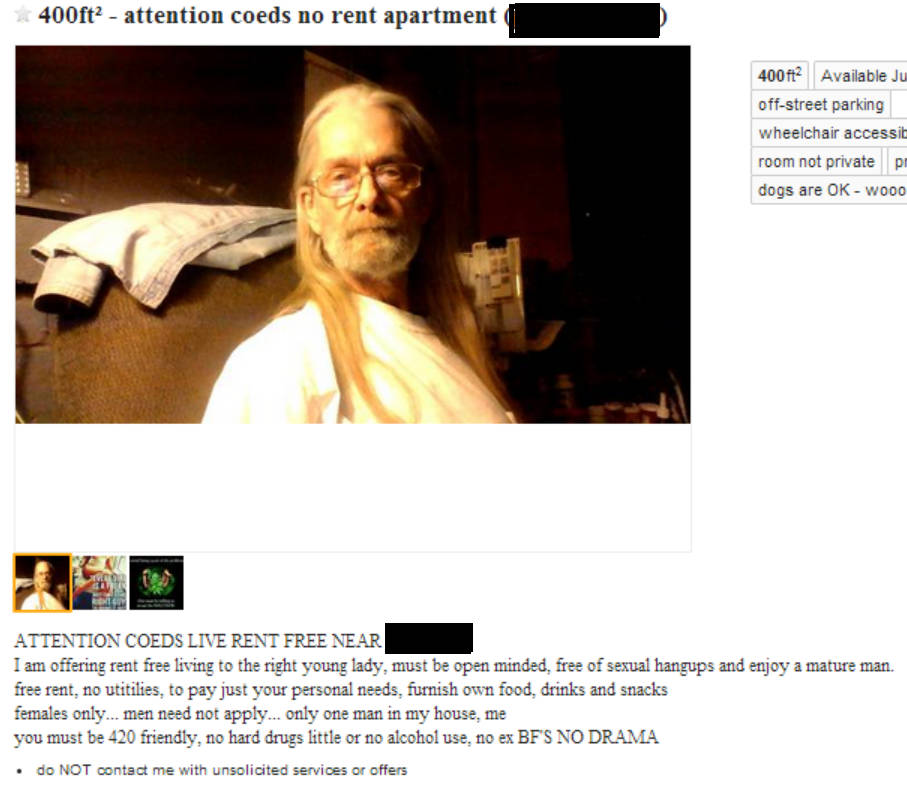 “ATTENTION COEDS” is a strong lede for any ad. It’s especially strong when you consider the advertiser looks like a cross between Willie Nelson and Father Time. The picture alone is enough to inspire fear into the hearts of young ladies everywhere. Unfortunately, this ad takes a turn for the worse when this “mature man” mentions he wants someone “free of sexual hangups.” This is the Craigslist equivalent of an old man inviting you into his van. Hey, at least he’s dog friendly! 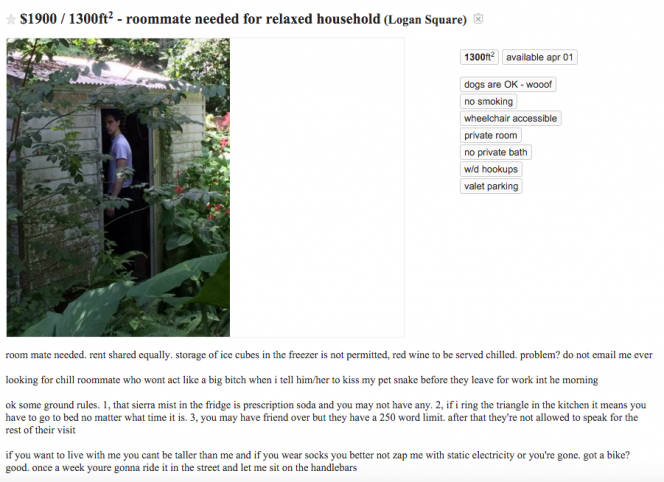 Let’s talk about that picture for a minute. It looks like the last known photo of the villain in a horror movie right before he went on a murderous killing spree. Surely, the terrifying picture was enough to drive away any sane Craigslister. If someone did happen to read on, they’d discover the most harrowing letter this side of the Zodiac killer. The man wants a roommate who a.) will kiss his pet snake b.) go to bed at the ring of a triangle and c.) take him for bike rides while he sits on the handlebars. I haven’t even mentioned that he has “prescription” Sierra Mist stocked in the fridge. What kind of monster drinks Sierra Mist over Sprite? 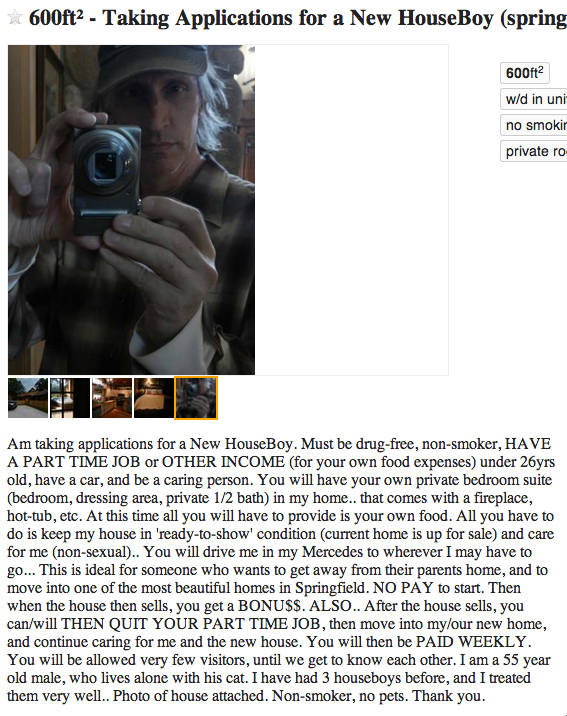 This is a very concerning post. For one, the advertiser is seeking an unpaid young houseboy that will care of him in a totally non-sexual way. The fact this 55-year-old male lives alone with his cat isn’t even the scariest part. He claims to have had three houseboys before, leaving us to wonder about their grisly demise. This is an entry straight out of the serial killer playbook. 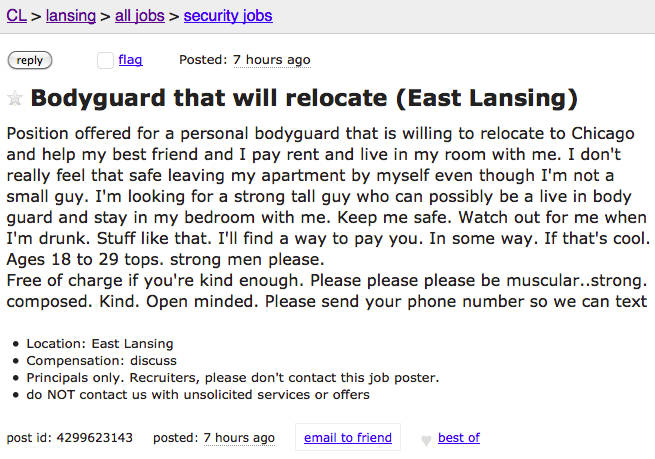 This ad isn’t so much creepy as it is brutally honest. This poor kid is just looking for a little protection in a cold dark world. Also, you know, someone to keep him safe when he’s drunk. And watch over him while he sleeps. I do wonder what form of currency he discovered to pay this trusted guardian. I imagine some combination of bong rips, three-day old pizza, and IOU’s.