Increasingly, Americans are relocating for work. A 2014 study found that the number of people moving for a new job jumped 35% in a single year. And with today’s extremely low unemployment rate, holding steady at 4.1%, job seekers’ willingness to move will likely be a huge factor in their ability to find rewarding work.

To help those on the job market find the cities best for them, we’ve crunched the numbers to find the fastest-growing career fields, and which of the top 50 metro areas have the most opportunities in each field.

According to the Bureau of Labor Statistics, the field seeing the the fastest growth between 2012 and 2015 is no surprise: computer and mathematical occupations, which have grown by more than 20% over the past four years. In a relatively distant second place, community and social service occupations have grown by 15.3%, followed more closely by business and financial operations occupations (13.4%) and construction and extraction occupations (13.2%). Our fifth fastest-growing field involves health care practitioner and technical occupations, which grew 12.3%.

Odds are, if you’re on the job market, it is in one of these increasingly popular fields, so let’s analyze where job-seekers can find the most opportunities.

JOB DENSITY IN THE TOP 25 MSAs

If we would look only at the sheer numbers of jobs in each field in metropolitan statistical areas around the country, we would end up with a very distorted view of opportunity. So instead, we’ll start with a relative look at where these popular occupations are most plentiful by looking at jobs in the occupation category, per 1,000 jobs in the MSA 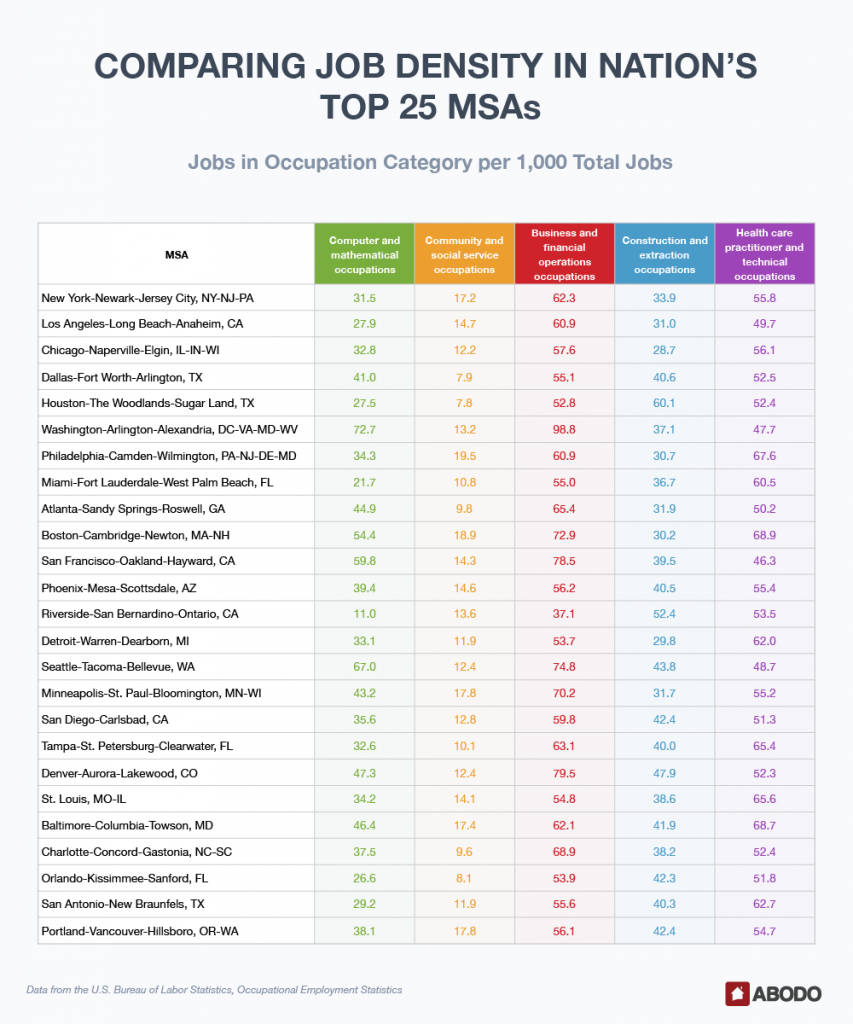 For the fastest-growing occupation — computers and math — Washington-Arlington-Alexandria, DC-VA-MD-WV, offers the highest job density, with nearly 73 out of every 1,000 jobs being in the field. Seattle-Tacoma-Bellevue, WA — recently named the country’s second-best tech city — has 67 job in the field per 1,000. Somewhat surprisingly, Riverside-San Bernardino-Ontario, CA, scored the lowest of the top 25 MSAs, with only 11 jobs in tech for every 1,000 jobs in the area.

For community and social service occupations, Philadelphia-Camden-Wilmington, PA-NJ-DE-MD, leads, with nearly 20 jobs per every 1,000 being in the field. Boston-Cambridge-Newton, MA-NH (18.9), is close behind, as is Minneapolis-St. Paul-Bloomington, MN-WI (17.8). This category also held some of the lowest job density numbers in our study, especially in Texas: Dallas-Fort Worth-Arlington (click here for some rental options) and Houston-The Woodlands-Sugar Land (places with awesome apartments found here) both have less than 8 jobs in community and social service per 1,000 jobs in the area.

Our nation’s capital tops the list for business and financial operations, with a solid 98.9 jobs in the field per every 1,000 — the highest density of any occupation in any of the top 25 MSAs. Denver-Aurora-Lakewood, CO (79.5) and San Francisco-Oakland-Hayward, CA (78.5) also posted solid numbers.

Houston-The Woodlands-Sugar Land, TX, has the highest density for construction and extraction occupations, with about 60 out of every 1,000 jobs being in the field, likely thanks to the metro area’s fast expansion and proximity to oil access.

Lastly, health care practitioner and technical occupations, a universal need for cities of all sizes, are most dense in Boston-Cambridge-Newton, MA-NH, and Baltimore-Columbia-Towson, MD, which each have nearly 67 jobs in the field for every 1,000 jobs in the area.

But looking at opportunities relative to total employment doesn’t tell us the total story, either Sure, there might be thousands of opportunities for business and financial occupations in New York City, but there also millions of people trying to get them.

We looked at the country’s top 50 MSAs and, according to the location quotient, determined the top 10 MSAs for each of our fastest-growing occupations.

These tech-heavy jobs include everything from software and web developers, support specialists, systems analysts, network administrators, and programmers, to statisticians, mathematicians, and computer research scientists. According to Sparx IT Solutions, “this occupation category has been growing at an unsurpassed rate since 2012, at an average of 4.8% a year — which would be higher if not for a stumble between 2014 and 2015, when the sector’s employment grew only 1.5%. The year before, employment grew an incredible 8.1%.”

So where are these booming jobs found?

Now that we’re looking beyond the 25 largest metro areas in the country, San Jose-Sunnyvale-Santa Clara, CA, rockets to the top of the our tech jobs list, blowing the other cities out of the water by nearly double (and even though it’s expensive, you can even find somewhat affordable things to do in San Jose). The heart of Silicon Valley has a location quotient of 4.2, meaning that the area has more than four times the national average density of computer and math jobs. Nearby San Francisco-Oakland-Hayward, CA, also scored well, but is four spots lower on our list, with a location quotient of 2. 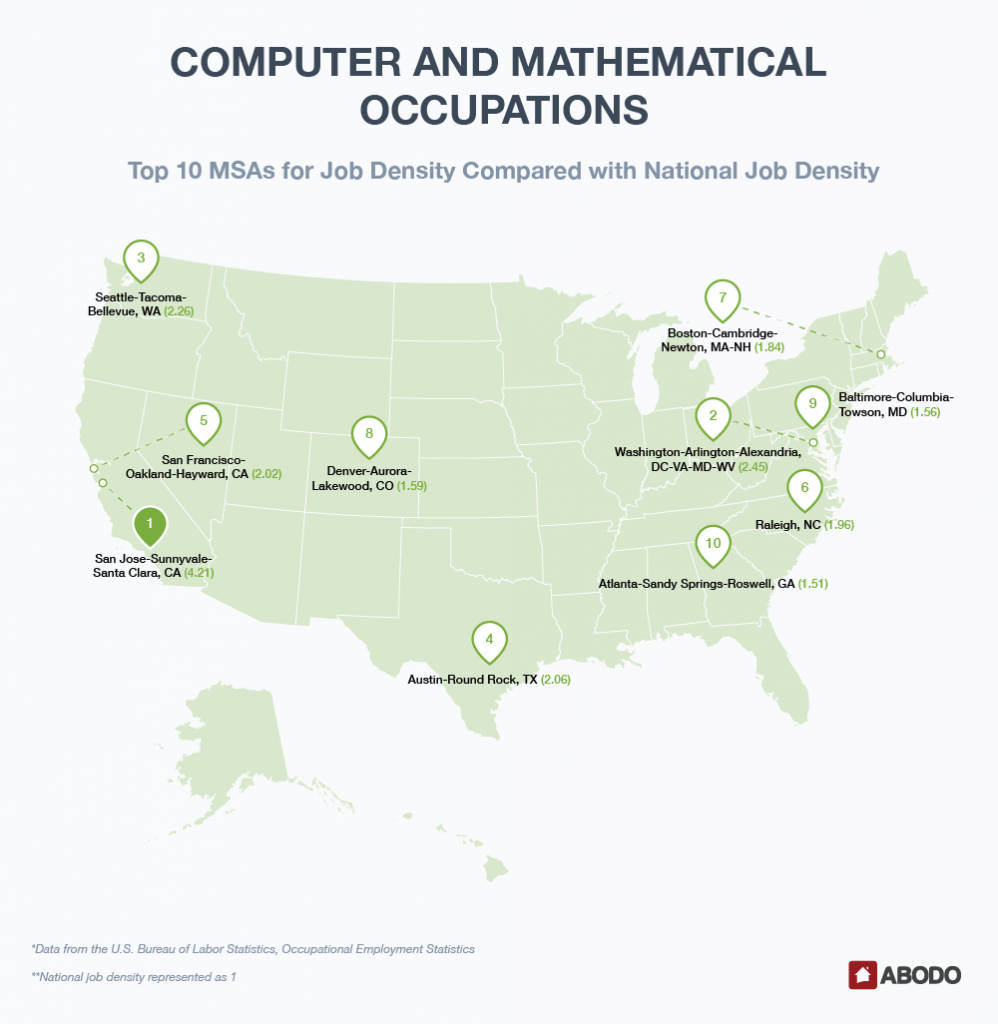 Washington-Arlington-Alexandria, DC-VA-MD-WV, comes in at #2, with a location quotient of 2.5, followed closely by Seattle-Tacoma-Bellevue, WA — home to giants like Microsoft, Amazon, and Expedia — at 2.3. Austin-Round Rock, TX, is also home to an Amazon office, as well as Google and Facebook, which lands that still-growing tech metro at #4, with a location quotient of 2.1.

Raleigh, NC, is the smallest MSA to make it in our top 10 best places for tech jobs, yet it earned the #6 spot with nearly twice the national average density of computer and math jobs. IBM, Cisco, and eTix are just a few of the tech companies with offices near the oceanside city.

Social workers, counselors, religious workers, probation officers, therapists, and community health workers comprise this universally important job category, which means that these workers aren’t concentrated in metros. Since these jobs are everywhere, many areas are on par with the national average, leading to lower overall location quotients.

In terms of jobs per 1,000 for the top 25 MSAs, Philadelphia-Camden-Wilmington, PA-NJ-DE-MD, topped the list. But now that we’re looking at location quotient for the the top 50 MSAs, the Philadelphia area drops to #3, with about 1.4 times more jobs than the national average. 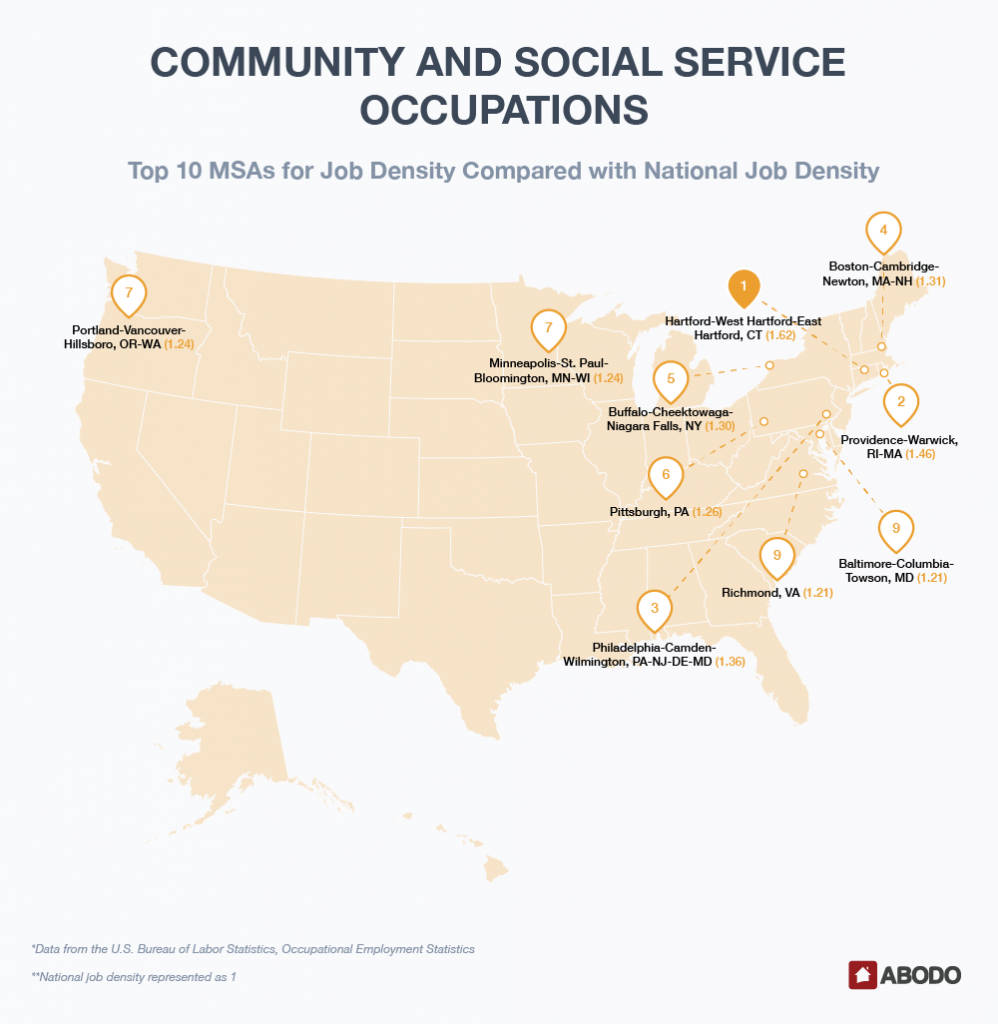 Instead, Hartford-West Hartford-East Hartford, CT, rises to the top, with 23.3 jobs in the field per every 1,000 and a location quotient of 1.6. Providence-Warwick, RI-MA, comes in second place with about 1.5 times more jobs than the national average concentration. Boston-Cambridge-Newton, MA-NH, and Buffalo-Cheektowaga-Niagara Falls, NY, both have a location quotient of 1.3.

One trend is clear so far: The East Coast is the place to be for community and social service jobs. Out of our top 10 MSAs, only two fall away from the East Coast: Minneapolis-St. Paul-Bloomington, MN-WI, and Portland-Vancouver-Hillsboro, OR-WA, which both have a location quotient of 1.2. Milwaukee-Waukesha-West Allis, WI, also scored well, with 1.08. 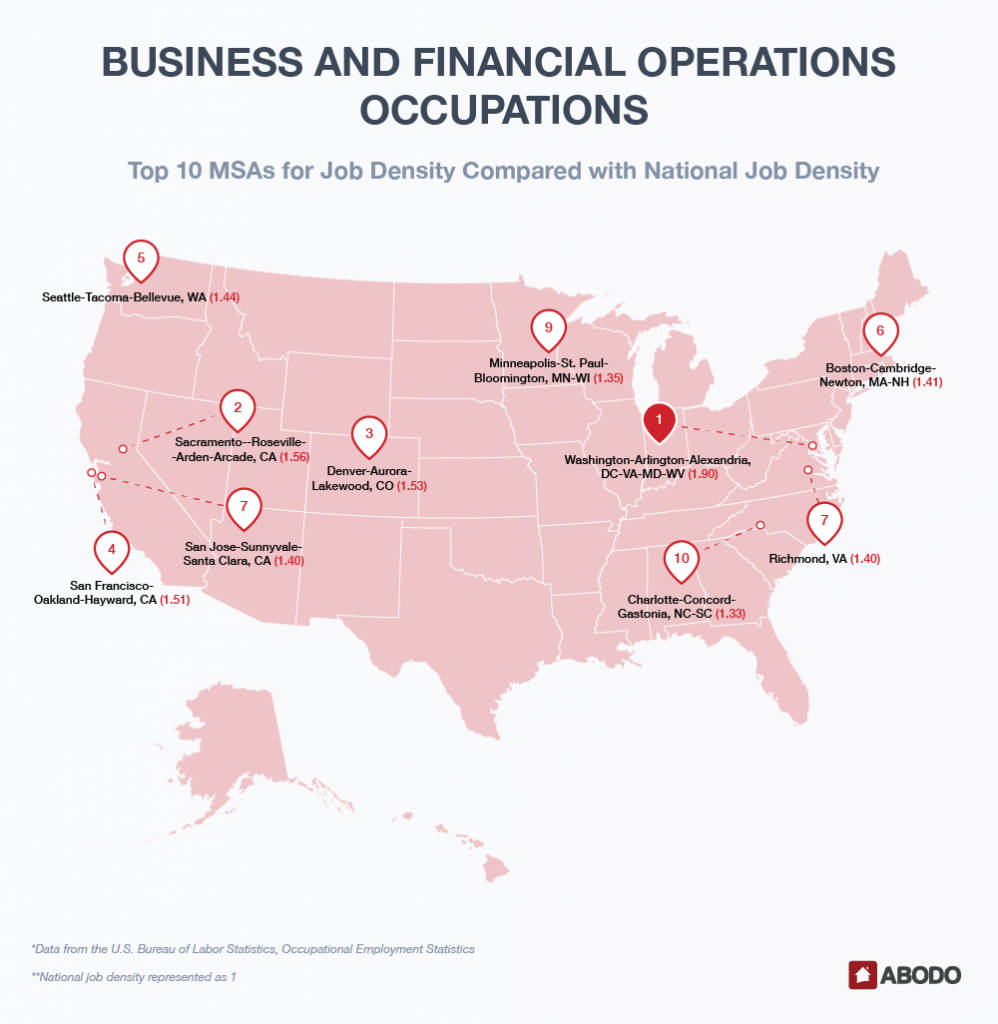 Still, Washington-Arlington-Alexandria, DC-VA-MD-WV, has nearly double the national average concentration of business and financial jobs, with a 1.9 location quotient. Sacramento–Roseville–Arden-Arcade, CA; Denver-Aurora-Lakewood, CO; and San Francisco-Oakland-Hayward, CA, all have location quotients around 1.5.

Although these top MSAs are fairly scattered around the country, they tend to line up along the coasts, with only two exceptions: Denver-Aurora-Lakewood, CO, and Minneapolis-St. Paul-Bloomington, MN-WI, which has a location quotient of 1.4.

Many of these cities pop up time and again on our list, but business and financial occupations give one MSA its only appearance on our top 10s: Charlotte-Concord-Gastonia, NC-SC, with a 1.3 location quotient. 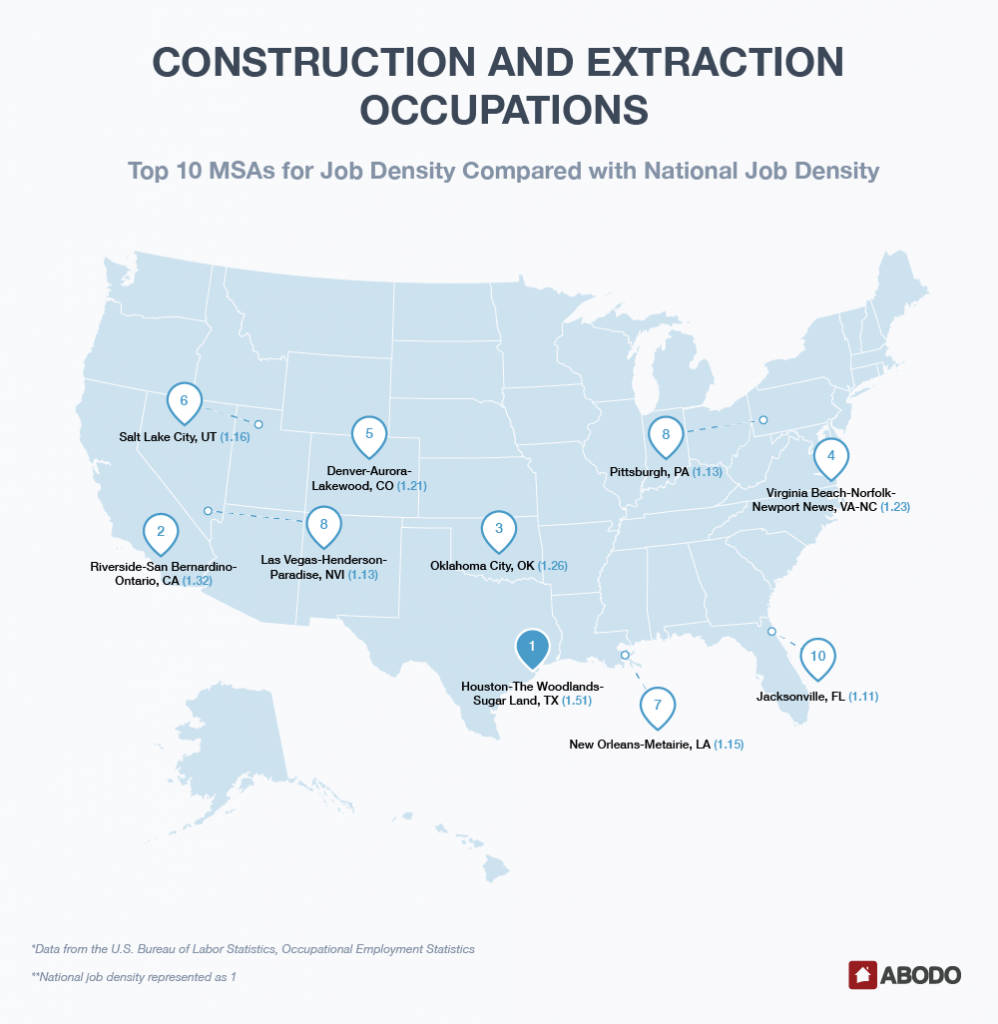 It could be the link to oil and gas extraction that puts Houston-The Woodlands-Sugar Land, TX; New Orleans-Metairie, LA; and Oklahoma City, OK, in our top MSAs for these jobs. The Houston area is also one of the fastest-growing in the country, which would also give it a leg up in construction jobs. The Denver-Aurora-Lakewood, CO, area is also frequently ranked as one of the nation’s fastest-growing metros, lending credence to their #5 placement and location quotient of 1.2.

Seattle-Tacoma-Bellevue, WA, which was named Crane Capital of America multiple times due to its ongoing construction projects, is bumped out of the top 10 by smaller MSAs, including Riverside-San Bernardino-Ontario, CA; Salt Lake City, UT; Pittsburgh, PA; and Jacksonville, FL — which beat out Seattle by just a hair. Jacksonville’s location quotient was 1.11, to Seattle’s 1.10.

Health care jobs — such as physicians, surgeons, lab technicians, dentists, physical therapists, and support technologists — must necessarily exist everywhere, which drives down location quotients. Still, some cities rise to the top. And they’re probably not the cities you’d expect.

The National Institutes of Health are headquartered in Bethesda, MD, the Mayo Clinic in Rochester, MN, and Cedars-Sinai in Los Angeles. But Birmingham-Hoover, AL, has the highest concentration of health care and technical jobs in any the top 50 MSAs in the country, with a location quotient of 1.4.

Behind Birmingham are two more likely suspects: Cleveland-Elyria, OH, home to the renowned Cleveland Clinic, and Pittsburgh, PA, which houses the University of Pittsburgh Medical Center. Each of those MSAs have location quotients of 1.3 and 1.2, respectively.

New Orleans-Metairie, LA; Oklahoma City, OK; and Indianapolis-Carmel-Anderson, IN, all have about 1.2 times the national concentration of health care and technical jobs. Following these three, we can see the impact of Massachusetts General and the Harvard Medical School in Boston-Cambridge-Newton, MA-NH, and Johns Hopkins in Baltimore-Columbia-Towson, MD, each with 1.16.

Our analysis of job concentrations show that for four of the five fastest-growing jobs, chances are, job-seekers won’t necessarily need to relocate in order to find opportunities in their field, but they might want to in order to chase the perfect position or pursue growth. The coasts, especially, are ripe with opportunity, but even Midwestern and inland areas, like Minneapolis and Austin, offer ample opportunity in these popular careers — and often with cheaper housing and a lower general cost of living.

All results in this article were calculated using data from the Bureau of Labor Statistics (BLS) from 2012 to 2016. The 22 major occupation groups, as identified by the BLS, were first ranked by the percent change in number of employees from 2012 to 2016 according to BLS Current Population Survey.