Rentable’s Cost and Opportunity series has so far helped you weigh the best cities for jobs in tech, health care, and PR. This month, we’ll turn to one of the nation’s most important jobs: education. The American Community Survey’s education occupational category includes all teachers, regardless of level, as well as teaching assistants, museum curators, archivists, and librarians.

Whether you’re a Montessori teacher, a college professor with tenure, or a librarian, you need a place to live. And if you’re renting, some cities are better than others.

Job density metrics for education naturally favor college towns with more centralized economies. So it’s no surprise that when it comes to sheer job opportunities, two cities are well above the rest: Rochester, NY; and Chapel Hill, NC. Almost 91 jobs out of every 1,000 in the Chapel Hill-Durham MSA — home to both the University of North Carolina and Duke — are in education. Rochester, which hosts the University of Rochester as well as campuses for SUNY-Brockport and Monroe Community College, has a similarly high figure of 88.

But access to job opportunities isn’t the only factor to consider when you’re relocating for a career — you also need to balance your potential earnings with your potential housing costs. To make this easier, we’ve created our own formula to score 76 MSAs nationwide on a weighted balance of median one-bedroom rent, median educator salary, and job density. 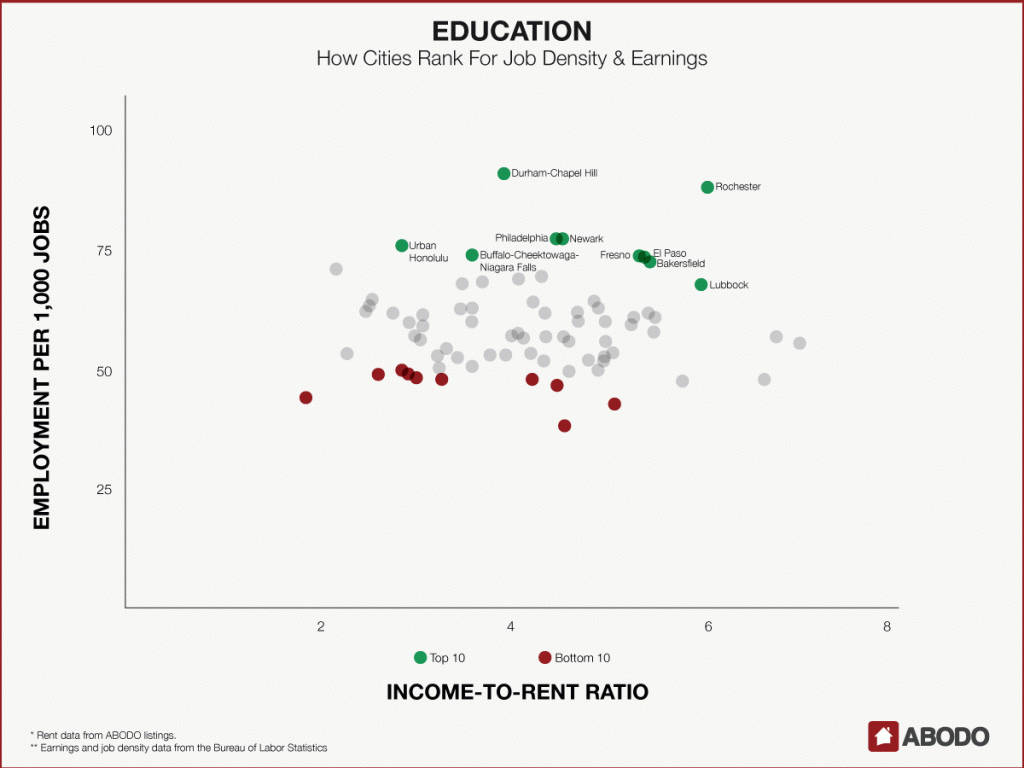 Taking income, rent, and density into account, Rochester and Chapel Hill again lead the way, with scores of 8.8 and 8.5 (out of a perfect 10) — but their positions are reversed. That’s mostly due to Rochester’s extremely favorable income-to-rent ratio. Educators in both cities make similar salaries ($51,360 in Rochester and $51,870 in Chapel Hill), but the median rent for a one-bedroom in Rochester is only $650 per month, compared to $1,094 in Chapel Hill.

Despite low rents ($652), a low job concentration of 42 educator jobs per thousand keeps Indianapolis, IN, on the other end of the list, with the third-worst composite score. Only Las Vegas, NV, with just under 38 teaching jobs per thousand, has a lower concentration of jobs, earning the worst composite score. As for San Francisco? The biggest contributor to its score of 1.2, second-worst on the list, is the rent. Not many teachers can afford a rent of $3,415 per month on their $56,390 salary.